This Week In Schadenfreude: It came from the Championship Subdivision

This Week In Schadenfreude sifts through the dross of the internet to find the most unhinged fans after a weekend of college football action. This week: reliving the second quarter of USF-McNeese State! Pitt gets Winston'd! Spartan fans demand excellence! Frank Beamer foams at the mouth! (I know that's par for the course.)

Share All sharing options for: This Week In Schadenfreude: It came from the Championship Subdivision

Welcome back to college football, everybody. The opening week is invariably a dull affair in which narrow escapes against lower-division teams have to substitute for the raw emotional power of losses—

First as tragedy, then as farce

Should be clear which phase we're now in.

College football played on a national stage potentially provides an important branding opportunity for a University, and it was worth pursing. But it didn't work out for us, and at this stage we're doing little but reinforcing our image as a 2nd rate university.

Which fanbase generated this after last weeks action?

If you guessed South Florida, you get a cookie. Give it to one of the above teams. They've suffered enough.

South Florida scored on their first play from scrimmage, then gave up 33 unanswered points, 31 in the second quarter. This demands a gamethread delve:

AHHH, there's nothing like minutes before kickoff of the first game of the season. Here's to a great season to remember for our USF Bulls! GO BULLS!!!

Special teams!! You gotta be kidding with the long snapper. But we mentioned that concern in one of these threads.

McNeese with the lead. How do we respond?

A LOT of errors on our end. Hopefully we clean this **** up

Alright, that's football. Take a little adversity and now we HAVE to turn it around. This ought to be a good test of character.

USF fumbles on their own five, and the first jumpers appear.

we are still a freaking joke.

Easy, guys. Still early, lots of jitters and some adversity. Taggart has been preparing them for this.

Where are all the posters begging for BJ to get benched?

Pretty sad when the backup for an FCS school is better than our starting QB.

Can we rehire Skip Holtz?

At the game. This is a disaster.

Another field goal. USF gets the ball back and attempts to score before halftime. They start a drive.

Great gamble guys! Love the ball sack to go for on 4th!

Wow. Matt Floyd < anyone on Earth with a functioning arm

And run back 72 yards for a touchdown.

When the announcer is at a loss for words, you know you're in trouble. All homey could say was, "Wow" and a whole lot of pregnant pauses. Ugh.

There are 12 seconds left in the half. McNeese State leads 33-7.

I think its time to either put Bench in or forfeit. This is soooooo much worse than the UCONN game. We are gonna be the laughing stock of college football this weekend.

If you have a phone and at least one friend who didn't go to USF, then you've already realized the laughing stock started 30 minutes ago.

South Florida, you have acquired the Tears of Unfathomable Sadness despite stiff, stiff competition. Congratulations. It is the only trophy you will get this year.

To the week in spleen!

Oh, god, PITT. The worst thing is when you get all hopeful and stuff. Have you not perceived the work of Spilly?

Excitement – totally out of control!!!

Lets have a good year – Hail to PITT

What was it like to get Winston'd? Let's find out.

Winston looks calm for a freshman

Is it me or does secondary look lost / beat on every single play.

I think the sideline might be our best-positioned DB

How can our cornerbacks suck so bad

Isn’t our pass D supposed to be the best part, and least worrisome part of the team, preseason?

At least we were happy with our qb for 5 minutes.

At least they invited Larry Fitzgerald to experience this debacle

Meanwhile, VIRGINIA TECH was this year's virgin sacrificed on the altar of Saban. I know this feel, bro:

I was totally prepared for a beatdown, but not like that

Welcome to Michigan 2012, except you're wondering if your coach has syphilis.

What the hell was he thinking putting 3 freshmen on ST against Alabama???did he in his right mind not think it would tilt the game in favor of Bama ????I mean, WHAT WAS HE THINKING..??

Probably not. They have antibiotics for that stuff now.

I'm not even sure if we should track these guys anymore or just lump them into "Other," but South Florida above and UCONN may make these folks un-ignorable if they keep losing by lots to very bad teams after being left behind by the Big East rapture:

Your team has been trapped in a seemingly unending vortex of negativity for the past two and a half years, during which time it finished 5-7 in back-to-back years, fielded an unwatchable offense and saw just about every one of its conference rivals move on to new and better homes, leaving it behind stuck with a bunch of outcasts. National pundits routinely belittle and mock your team and its new conference, and the only way to change that narrative is to come out of the gates hot and win football games.

So of course, you go out and lose the first game to f***ing Towson.

Hey, look on the bright side:

Maybe the Big East will take us back.

Yeah, Iowa lost to a MAC team. Yeah, Purdue got run out of Nippert Stadium 42-7. Yeah, Illinois still exists. But none of those things were close to the worst thing to happen to a Big Ten school over the weekend, judging from reactions. That would be MICHIGAN STATE beating Western Michigan 26-13.

Not TWIS material, you say? A 13-point victory, you say? Move on, you say? MSU fans would like to differ after their quarterbacks combined to acquired 3.1 yards per attempt. The Only Colors put together a highlight reel. It is all Mike Sadler punts. It is nearly four minutes long. Yeah.

I cannot cut this down. Prepare for the king of blockquotes. I bolded some stuff.

To All Sunshine Blowers

You guys better just shut right the f--- up, as this "performance" tonight was laughable. The offense is so bad right now that they could barely put 10 points on WESTERN F---ING MICHIGAN. AT HOME.

Let that sink in for a moment.

I don’t want to hear the same old annoying ass optimism like, "We are saving our offensive playbook for Notre Dame" or, "It was the first game of the season. They were just a bit too nervous".

The fact of the matter is that the quarterback scenario is f---ed right up the poop chute right now, and Dantonio doesn’t seem to have a clue about what to do. The "receivers," if anyone could legitimately call them that without breaking out into belly shaking laughter, appear to be woefully inept in all regards—routes, speed, and, what is infinitely worse, HANDS!! News flash: you have one f---ing job, fellas, and it is TO CATCH THE DAMN BALL!! These guys look like the only thing they could catch is a hearty case of crabs from some Zeta Tau Alpha sorority whore who has spent too many nights at Rick’s sucking numerous, numerous dicks. …

Further, what in the name of all that is holy is wrong with our offensive line? We outweigh WMU’s defensive line by quite a bit. We should have been BLOWING those f---ers out of the way and opening up wide holes for our running backs! But no! That didn’t happen. Instead, those inscrutable turds got dominated by Western Michigan for the vast majority of the game. If they perform like this on any team in the Big Ten, then this is going to be one hell of a long season.

Get ready for it boys; if this team doesn’t get their collective heads out of their asses, then this season will end up as being one to forget. We need to f---ing demand absolute f---ing excellence from a head coach who is in his seventh goddamned season. Enough is enough.

Finally, to end, consider this: if it hadn’t been for our defense, we would have lost to WESTERN MICHIGAN, for the first time since 1919, at home, in our own house. Holy shit.

Scott Tenorman of the—

A joint Scott Tenorman of the Week for a 13-point win. Never change, Red Cedar Message Board. I tried to find some equivalent Nebraska stuff, but Nebraska fans are too nice. Iowa fans are too beaten down. Purdue fans didn't really expect better. 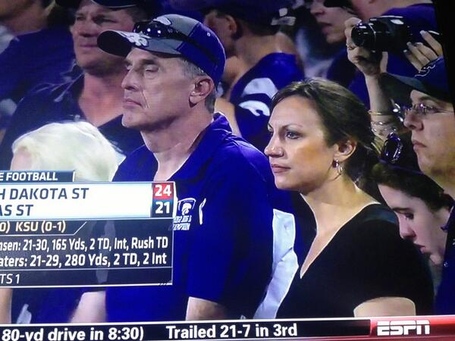 Kansas State plays like that guy delivers wrestling promos, and then:

OREGON STATE was one of the FCS victims, notably the only ranked one. That's the first ranked team to drop a game against an FCS foe since [404 FILE NOT FOUND]. I agree with this crank:

But then it gets weird. After several paragraphs of that, he starts exhorting Eastern Washington:

WHERE THE HECK WAS DEFENSE DURING THE SECOND HALF!?!?!?!?!?! IT LOOKS LIKE IF YOU WEREN’T TRYING AT ALL!!!!!! The defining moment was the last 19 seconds, where it was pretty desperation for us Beavers. But instead, you allowed us to get to your own 37 yard line. THAT OFFENSE WAS COMPLETELY STOPPABLE!!!! While the first half looked great, the second half, pretty much every possession, you allowed us to score a touchdown, which eventually made the game a barn burner. Completely unacceptable in my opinion.

Empathy: the breakfast of non-champions.

GEORGIA took a tough season-opening loss to top-10 Clemson, which resulted in a Dawgs fan calling into a radio show and bawling as he demands the firing of Mark Richt:

Yes, Georgia was toe for toe with Alabama in the SEC championship game less than a year ago. Just throwing that out there.

MISSISSIPPI STATE has advice for the above guy after going down 21-3 to Oklahoma State in the opener:

Go ahead and do yourselves a favor,

and emotionally detach yourself from any sporting event that MSU is involved in. Thats what I did after the gatr’bowl, and I feel fine!!!

When your dead eyes survey triumph they will feel nothing.

KENTUCKY… is really excited about their recruiting still. Nevermind.

San Diego State loses to Eastern Illinois by 21, gets beat reporters into TWIS:

That, quite frankly, was a disaster

Well, yeah. Next time go for all caps.

• Taunting: Fine for Tim Tebow, not for Johnny Manziel