Devin Gardner is a quarterback wearing No. 98

Share All sharing options for: Devin Gardner is a quarterback wearing No. 98

Get ready for a quarterback wearing a big number.

Devin Gardner has switched to the number 98 to honor Tom Harmon, Michigan's first Heisman Trophy winner and a war hero.

Harmon, who won the 1940 Heisman Trophy, had his number retired. But the school decided to bring his number back into play to honor his memory... and the player who ended up with the number was their junior QB, Gardner, and he'll wear it for the rest of his career after previously wearing No. 7. He's a junior, so expect it for a bunch of games. 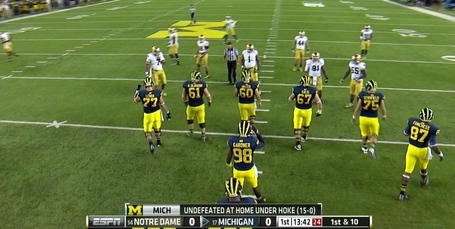 But it honors a heck of a football player and American. I'm for it. #B1G.

Gardner now dons the jersey of a war hero who happened to win the Heisman. No pressure.