Eminem's in the booth with the ESPN crew for the Notre Dame-Michigan game, but it's Brent Musburger who's got 40 bars and one mic.

Share All sharing options for: Eminem songs as reinterpreted by Brent Musburger 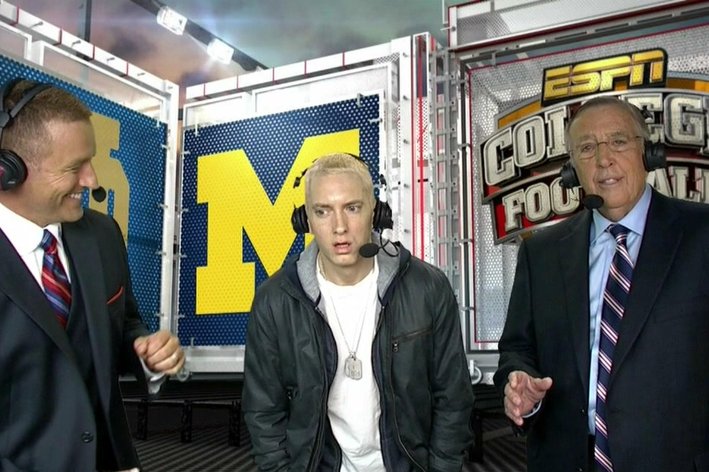 Brent Musburger and Eminem united for one predictably awesome, weird and confusing interview during Michigan-Notre Dame.

Rap artist Eminem joined Brent Musburger and Kirk Herbstreit in the booth during the third quarter of the Notre Dame-Michigan game. It seemed like an odd grouping of personalities, all things considered, but there's one thing none of us realized until just now:

With that, the man now known as MUS BE THE MONEY shocked millions of viewers when he tossed off his salt-and-pepper wig to reveal a head full of bleach-blond hair and dropped some of the illest rhymes about being Brent this world could have even imagined. 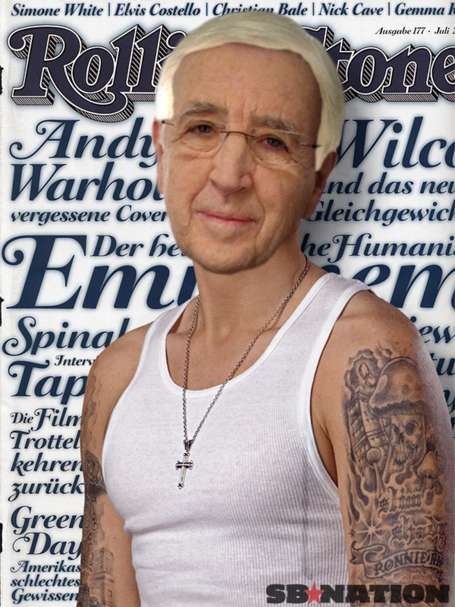 Look, if you had one bet, or one opportunity
to seize everything you ever wanted. Like a yacht or something.
Would you parlay or just hit on another coed?
Yo

His palms are sweaty, knees weak, fingers tingle
Cialis in his bourbon already, Knob Creek Single
He's nervous, but on the surface he looks sober and ready to voice over,
But he keeps on forgetting what he wrote down,
The producer's face is blank
He opens his mouth, but it just smells like drank
Ad-libbing now, the game starts in five
It's ABC, you are looking live! 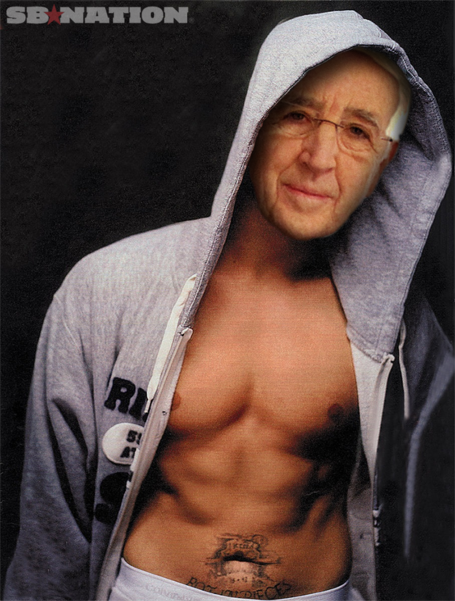 I've created a monster, 'cause nobody wants to
see Brent no more they want Musby I'm spots of liver
well if you want Musby, this is what I'll give ya
a little bit of me mixed with some heart medicine
beta blocks that'll jumpstart my heart quicker than a
shock when I get shocked at the hospital
by the doctor when I'm palpitating
and still gambling on the table while he's operating (hey!)
you waited this long now stop debating 'cause I'm back,
I'm in the booth and pontificating
I know you keep it PG there Mickey
but my gambling problem's super tricky
So the FCC won't let me be or let me bet, see, so let me see
they tried to shut me down on NBC but they're filled with envy without me
So cover the spread, daddy gets fed, hell yeah,
finish ahead and put it to bed and get ready 'cause this stuff's about to get heavy
I just settled all my lawsuits-- F YOU TOMMIE! 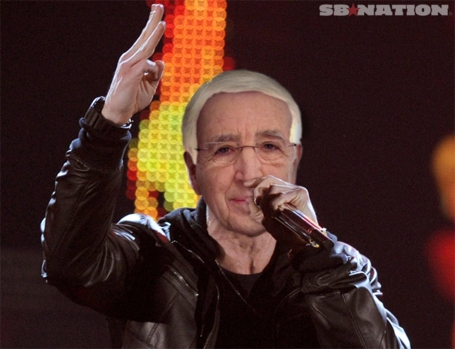 DEAR MISSUS I'M TOO GOOD TO STOP DATING AJ
This'll be the last time I ever drunk dial your ass
It's been nine months and still no call, I don't deserve it?
I know you got my last fifty voicemails, I enunciated on 'em perfect
So this is my cassette I'm sending you, I hope you hear it
I'm in the car right now, I'm doing 90 on the freeway
Hey Webb, I drank a fifth of vodka, you dare me to drive
You know the song by Phil Collins "In the Air of the Night"
About that guy--oh right you're 20 you've never heard of him
And all I wanted was a lousy letter or a call
I hope you know I ripped all your bikini pictures off the wall
I LOVED YOU WEBB, we coulda been together, think about it
You ruined it now, I hope you can't sleep and you dream about it
And in your pageant, I hope you're last place and you scream about it
I hope McCarron breaks up with you and you can't breathe without me 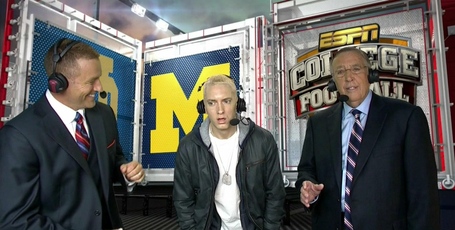 ...Em? Marshall? What'd you think of my rhymes? 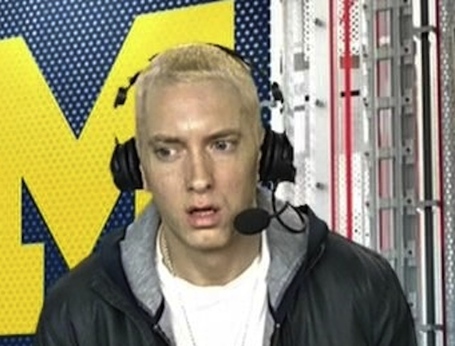