The top 25 review: Notre Dame already misses you, everyone else is laughing at USC

It's Sunday, so there's a new AP Top 25. But we can still laugh at the old one. Welcome to Brian Kelly's karaoke dungeon.

Share All sharing options for: The top 25 review: Notre Dame already misses you, everyone else is laughing at USC

Dominated the bye week by margins unquantifiable. Spent the weekend on the couch guffawing openly at your team. They play an unheralded Texas A&M next week in a neglected conference game of little import or public notice.

Defeated San Diego State 42-7 despite this week's edition of "Braxton Miller goes down injured yet again because he is an expensive piece of high-performance equipment that happens to drive against the flow of traffic once a week." Kenny Guiton is the best stunt double in the world.

59-10 over UVA, but it was closer than the scoreboard makes it look, because at one point in the game these teams were tied! (For exactly one minute and one second in the first quarter, the length of time it took the Ducks to score.)

Hit the "sim rest of game" button against FCS South Carolina State some time in the second quarter of a 52-13 win.

Lost 41-30 when the Gamecocks' defense went supercritical, melted through the turf at Sanford Stadium, and drove coaches to open warfare against each other on the sidelines.

A 65-28 scrimmage against Sam Houston State might have seen a bit unfair, but that's before I tell you that their team name is spelled B-e-a-r-K-a-t-s. They thus deserved every point of a blowout.

Eastern Kentucky served as a warmup to regular, non-directional Kentucky next week, but more importantly gave a helpful baseline by losing 44-7, thus establishing a measure by which it will be possible to gauge just how awful FIU will be in two weeks against the Cardinals. (FIU had 173 yards of total offense against UCF this week. They scored zero points. They will be worse than the East Kentucky Colonels, but science requires data.)

Scored 56 points to UAB's 17 despite having a decided disadvantage in time of possession. 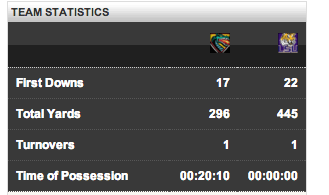 That's offensive efficiency and time manipulation only a Les Miles team can create. By Alabama law UAB games are now only 20 minutes and 10 seconds long, proving Alabama is capable of making at least one sane law that benefits its citizens.

The biggest games of Week 2

In five of their last six games, Georgia has allowed over 200 yards rushing on the ground. They are now a really good Big 12 team playing in the SEC. (Clemson missed it by three yards with 197 rushing yards total.) Georgia is also 4-2 in that stretch against really good competition, because defense and everything else you know are lies.

Lost 21-16 despite holding Miami to 1/11 on third downs, doubling up Miami on offensive yardage, and gaining 22 first downs to Miami's 10. Everyone has a gift.

Gave up 500 yards of offense in a 56-35 win over the UTSA Roadrunners, who scored 32 more points than Mississippi State did against the Cowboys. #Pray4Clanga

Lost to obscure regional non-rival Michigan 41-30, and now moves on to real games against opponents they care about. THEY DON'T CARE, MICHIGAN. DO YOU HEAR HOW MUCH THEY DON'T CARE ABOUT YOU? DO YOU SEE ALL THESE NOTES THEY LEFT, AND THE MIXTAPE THEY MADE YOU BECAUSE THEY DON'T CARE? DO YOU SEE BRIAN KELLY REACHING OUT TO A PICTURE OF BRADY HOKE WHILE SINGING "STAY" ALONE IN HIS KARAOKE DUNGEON BENEATH THE STADIUM?

550 yards rushing to BYU in a 40-21 debacle that will end Manny Diaz's career at Texas. A shattered ashtray on the floor of a burned mobile home. BYU lost last week to Virginia. A dead sparrow hitting the cold pavement of an abandoned city. Mack Brown wants to coach until 2020. These are all the same thing now in 2013, because Texas has turned into the first three stanzas of "The Waste Land," and sometimes it's easier to explain things with poetry.

Vintage Big Ten Night in Norman was a rousing success as Oklahoma manballed the Mountaineers into a 16-7 win for the Sooners.

Beat the University of Notre Dame 41-30, then played "The Chicken Dance" afterwards, because a Michigan Man now plays night games AND is alright with a modicum of well-calibrated public bitchiness.

Bye week spent laughing oh so very hard at USC. Plays Nebraska next week, so is already given 400 yards of house credit in rushing yards at the Pelini Fountains Casino of Gap-Control-Negligent Defense.

Trounced Syracuse 48-27 and dropped 24 points in the second quarter alone on the Orangemen.

48-0 over Tennessee Tech, who only mustered 113 yards of offense on the day, but still had more passing yards than both of USC's quarterbacks combined.

A 56-13 win over Southern Miss brings the Pelini family to 1-1 on the weekend, since brother Carl lost 31-13 to East Carolina on Thursday night. There's gonna be a lot of 1-1 weekends in the Pelini family, because FAU may be one of the worst teams in the FBS. It is only saved by its proximity to an even bigger wellspring of football sorrow, FIU.

Could have scored a hundred on Buffalo in a 70-13 win, and probably had to actively try not to do so with 781 yards of offense total and a 56-13 lead at the half. Bryce Petty, a very good quarterback Lane Kiffin passed on, averaged 21 yards a completion. He probably finished the evening laughing at USC, too.

Was at one point tied 14-14 with Southeast Louisiana State University, but pulled ahead in the second half to win 38-17. Also solved their quarterback dilemma the old-fashioned way via random injury, this time in the form of a broken arm for poor Casey Pachall.

Lost to Washington State 10-7 despite the Cougars finishing the night with seven yards of rushing offense.

• Did that loss seal Mack Brown’s fate? | And how about Kiffin’s?

•The greatest FAT GUY TOUCHDOWN ever?