Ka'Deem Carey, Brett Hundley, and Johnny Manziel may have each gone out with a flourish, and one game turned December 31 from a dud into a classic.

Total yards for Johnny Manziel in Texas A&M's 52-48 comeback win over Duke in the Chick-fil-A Bowl. And they flowed easier and easier as the game went on. Manziel completed 11 of 17 passes for 97 yards and rushed three times for 13 yards in the first quarter. But Duke limited big plays, drew a couple of frustration penalties from the Aggies, blocked a punt, and surged to a 21-3 lead early in the second quarter.

Manziel in the final three quarters: 19-for-21 for 285 yards, eight carries for 60 yards, five total touchdowns. Duke continued to move the ball offensively, but Manziel almost single-handedly kept A&M afloat in the first half, and the (justifiably) maligned Aggie defense finally began to make some stops in the second.

Average scoring margin for the day's first three bowls. Hell, we really hadn't had a good day of bowling since Friday. But then the Chick-fil-A Bowl came around.

This was just the greatest. It had drama. It had a monstrous comeback. It had loads of wonderful offensive performances -- Manziel, Duke quarterback Anthony Boone, Duke receivers Jamison Crowder and Braxton Deaver and running backs Josh Snead and Juwan Thompson, A&M receiver Malcome Kennedy, two offensive lines that gave their quarterbacks ample time to do great things. It had silly-but-great plays, from Manziel hurdling into a brick wall then throwing a touchdown, to Duke's Johnell Barnes catching a bomb that might not have been intended for him, to Duke's David Reeves tiptoeing the sideline for his first career touchdown. And late, it even had a great defensive play in a game-winning pick-six from A&M's Toney Hurd, Jr.

This was not the highest level of football you'll ever see. Bowls almost never are. But this was a perfect game for you to watch, then run to Twitter to talk about what you just saw. And it kind of saved bowl season.

Logan Thomas' completion percentage in his final, abbreviated game as Virginia Tech's starting quarterback. He completed three of 11 passes for 46 yards in the Sun Bowl and rushed three times for 49 yards, but his game was defined by two enormous hits. He laid the first one on UCLA linebacker Myles Jack, and his career was effectively ended by one laid on him by linebacker Jordan Zumwalt.

Despite inefficiency, Virginia Tech was tied with UCLA, 7-7, at the time of Thomas' injury. He completed a big pass to tight end Kalvin Cline to set up a touchdown, and he had the Hokies driving a bit with his powerful 25-yard run.

Mark Leal replaced Thomas and held the fort for a little while -- Tech trailed just 14-10 heading into the fourth quarter, thanks to a VT field goal off of a muffed punt -- but when it was time to make plays, UCLA made all of them. Leal was quickly overwhelmed and ended up completing 12 of 25 passes for 130 yards, two picks, and three big sacks. His first pick went to Myles Jack, who returned it for a touchdown and a 28-10 lead. His second went to Zumwalt, who returned it to the Tech 10 and set up a score that made it 42-12.

Yards per carry for UCLA quarterback Brett Hundley. For the most part, Hundley had a tough day passing against the country's best defense. He averaged just 5.2 yards per pass attempt before a late bomb to Shaq Evans after the floodgates had opened.

But his legs and his ability to improvise were the reason the Bruins had the lead even before said opening. In eight non-sack carries, he rushed for 172 yards. Take out his 86-yard touchdown scramble, and he still averaged 12.3 yards per carry.

There has been a lot of talk about Hundley's pro prospects -- the buzz is that he's likely to declare for the NFL Draft -- and I have absolutely no idea if he's ready for that. This game pretty clearly enunciated all of his strengths (legs, accuracy) and weaknesses (occasional inefficiency, sack-taking), and at the pro level, the latter could outshine the former. But he is a really, really good college quarterback, and if this was his last game in a Bruin uniform, he left in memorable fashion.

Inefficiency or no, it's hard to argue with 387 total yards against a wonderful (if increasingly demoralized) defense.

Pass attempts by Boston College's Chase Rettig in the Eagles' first three drives of the AdvoCare V100 Bowl against Arizona. The gameplan was obvious: Take attention away from star running back Andre Williams by opening up the Arizona defense with play-action. And for a while, it sort of worked. On Rettig's first 14 pass attempts, he completed 10 of 13 for 112 yards and a sack. He did throw an early interception, but BC scored twice on three drives and trailed just 7-6.

At this point, you find out whether your gameplan worked. Either Arizona was going to get stretched out and show cracks, or BC was going to attempt the passing thing a little too long. This game saw the latter. After averaging 7.9 yards in his first 14 pass attempt, Rettig went one-for-five for 14 yards, two sacks for a loss of 20 yards, and a pick-six in his next seven attempts. William Parks returned an interception 69 yards for a score to give Arizona a 14-6 lead. It was 21-6 at halftime and 28-6 three minutes into the third quarter. The running lanes never opened up for Williams -- BC's offensive line was my biggest concern heading into this game, and that concern ended up quite justified -- and Arizona pulled away for a 42-19 win.

We can't really blame the gameplan for BC's lack of success; if anything, it delayed the inevitable. But when you can pinpoint the moment the plan began to fail, that's probably not a good thing.

Consecutive 100-yard games for Arizona's Ka'Deem Carey. Williams' bigger games might have been bigger than Carey's, but wow, was Carey consistent. He rushed 27 times for 169 yards and two scores on Tuesday (Williams; 26 carries, 75 yards), and since we're assuming he's going pro, his career will likely end with 4,239 rushing yards, a positively absurd total considering a) he only played three years, and b) he only gained 425 yards his freshman year. 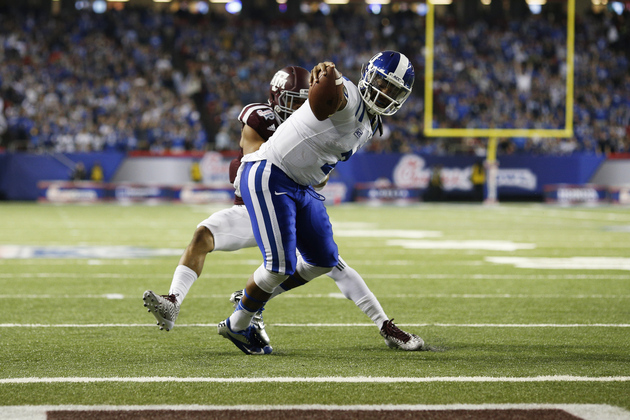 Yards per pass attempt for Duke quarterback Anthony Boone. Perhaps the saddest part about the A&M-Duke finish is that it ended poorly for Boone, who was not only magnificent but was actually superior to Johnny Manziel for a good portion of the game. In his first 35 passes, he completed 25 for 390 yards and three touchdowns. Manziel kept trying to bring A&M back, and Boone just kept completing passes on third down. For the game, the Blue Devils were nine-for-15 on third down; relying on third-down conversions is a high-wire act, but if you succeed, you can play keep-away for large chunks of time.

Boone and the Blue Devils were at their best late in the first half. With A&M closing in and cutting the Duke lead to 28-17, Boone completed four short passes, and Duke converted two fourth-and-ones. It set up an eventual touchdown by Josh Snead with 2:31 left in the half. And instead of giving the ball back to Manziel, Duke successfully attempted a surprise onside kick. Boone completed a 23-yard pass to set up a field goal at the end of the half, and Duke scored 10 points without Manziel touching the ball.

The game, however, ended up being decided by Boone's final 10 passes. With Duke's lead down to 48-45, Boone completed just four of 10 passes for 37 yards and was picked off twice. The first one wasn't a terrible play by Boone; Hurd, star of the A&M defense for the entire second half, just made a hell of a play in plucking the ball away from the intended receiver and racing in for a score.

The second one, however, was awful. With under 90 seconds left, Duke had driven inside A&M's 40. It was actually looking like the pick-six would be a good thing -- Duke could score a touchdown and take the lead with no time left for Manziel to respond. But while he had read pressure perfectly all night, he didn't see a corner blitz coming, and a foolish throwaway attempt landed right in the hands of A&M's Nate Askew. Ballgame.

Completions of at least 13 yards for Mississippi State's Dak Prescott in the Liberty Bowl. Rice's gameplan against MSU was pretty obvious: clog running lanes and force Prescott to beat you with his arm. It was a viable plan, as the Bulldogs will run all day on you if you let them, and Prescott has been a little scattershot with his arm at times, especially taking a late-season shoulder injury into account.

Rice held LaDarius Perkins, Ashton Shumpert, and Nick Griffin to 94 yards in 24 carries and forced MSU to the air. Of course, the plan backfired when Prescott indeed beat the Owls with his arm. He completed 17 of 28 passes for 283 yards and three scores, and his legs still did some damage, too: 13 carries, 85 yards.

Now, saying, "Prescott beat them," is probably not assigning enough credit to Jameon Lewis. The diminutive junior caught a ridiculous nine of 11 passes for 220 yards. He caught four of the eight passes of 13 or more yards listed above. He beat the Owls running routes, and he beat them improvising, and what looked like a game for a bit -- the score was 7-7 20 minutes in -- turned quickly into a rout, partially because of MSU's offense, and partially because of its defense. We'll come back to that.

Yards per target for A&M's Mike Evans over his final three games. The monstrous sophomore from Galveston had a great season by any account; he caught 69 passes for 1,394 yards and 12 touchdowns, and he torched Alabama in a way that will always be remembered in College Station. 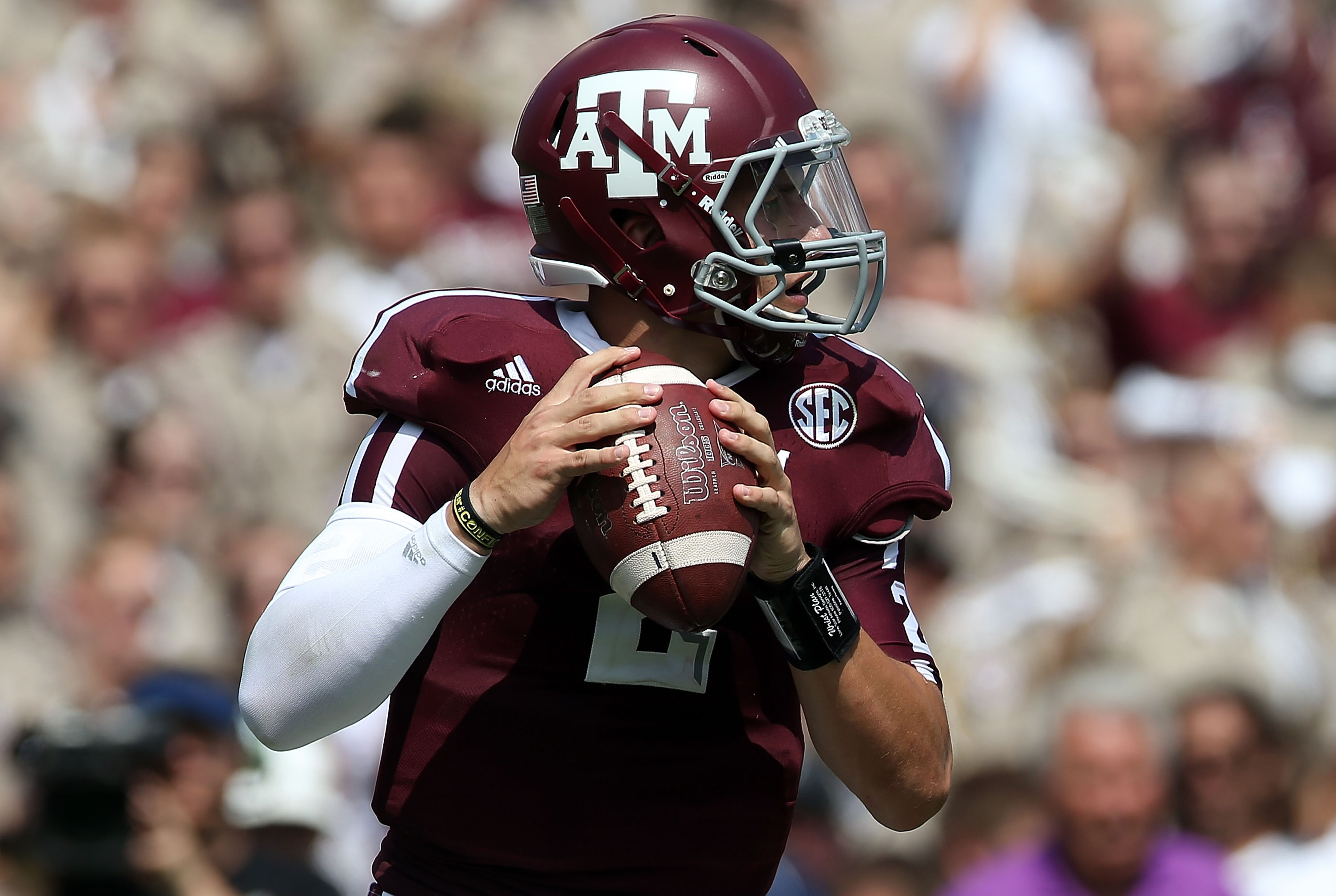 Johnny Manziel might no longer be the best player in college football, but he's still the most amazing, as his likely last performance showed.

But in what might be his three final games as an Aggie, he hurt his Draft stock dramatically. First, he caught just four of 12 passes for 51 yards against LSU. Then, he was shut down well enough by Missouri's E.J. Gaines that Manziel could only target him four times overall (he had four catches for eight yards). He also got into a bit of a Twitter kerfuffle with Missouri's L'Damian Washington, which isn't necessarily a good look after catching four passes for eight yards.

Then, in front of a national audience, he melted down on A&M's first possession of the game against Duke, drawing an unsportsmanlike conduct penalty while complaining about a pass interference no-call. Manziel yelled at him on the sideline.

Evans did rein in his emotions a bit. He caught four of six passes for 72 yards; a 26-yard catch set up A&M's first touchdown, and a 25-yarder set up the score that made it 41-38 Duke. But if these were his final 12 quarters as an A&M receiver, they did not help his stock much overall.

First downs by Rice after its opening two drives in the Liberty Bowl. Again, this was actually a game for a while. The Owls gained 79 yards in 16 plays in their first two possessions, twice driving into MSU territory, and while the Bulldogs' offense was picking up steam, it looked like the Owls could keep up.

They could not. Final eight drives: 32 plays, 66 yards, no points, one trip into MSU territory, two first downs. Rice ran out of tricks when it became obvious its offensive line wasn't going to win the battle against the MSU defensive line, and things quickly spiraled out of control.

Sense. This play makes no sense.

It's been fun, Johnny.