It's the second drug offense in 18 months for the talented wideout, who scored 12 touchdowns as a sophomore in 2013.

Missouri wide receiver Dorial Green-Beckham, a former No. 1 overall recruit and arguably the SEC's best returning wide receiver, was arrested early Saturday morning on misdemeanor drug charges in Springfield, Missouri. It's his second arrest in the last 18 months, as he was charged with marijuana possession back in 2012.

As the Missouri student paper The Maneater notes, Green-Beckham was released soon after being admitted into the Greene County Jail, and a spokesperson there said that release may portend good (or at least better) news for the Tigers:

"(The release) probably means he wasn't involved with what they thought he was involved in," Wilcox said in a phone call from the Greene County Jail.

Springfield, MO Police arrested Mizzou's Green-Beckham. Only will tell me "he was arrested, booked, released." pic.twitter.com/dc6hHXkn6f

Here's a screenshot of Green-Beckham's jail information while he was still in custody, via HZT Blog: 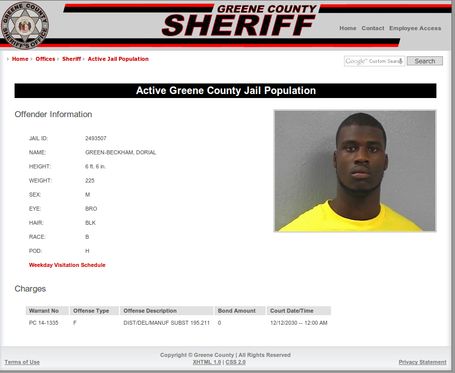 You'll notice DIST/DEL/MANUF SUBST at the bottom of that screencap, which stands for "distribution, delivery or manufacture of a controlled substance." It is indeed a felony. Now, whether that felony charge is ever actually formally brought against Green-Beckham is another matter; remember, the police have already said his early departure from the jail "probably means he wasn't involved with what they thought he was involved in." So there's reason for finger-crossing from Mizzou fans here.

Then again, as Dave Matter of the St. Louis Post-Dispatch notes...

Springfield police confirms arrest was made but says it's an ongoing investigation and declines comment on any details.

So with the lack of word on formal charges being brought against Green-Beckham or his status with the program changing at all, there's plenty more news to come. If this does end in a suspension—head coach Gary Pinkel might go the ubiquitous "violation of team rules" route—Missouri fans should hope it's a brief one. Mizzou gets a pair of cupcakes to open up the season before facing reigning Fiesta Bowl champions UCF, then ultra-chaotic Indiana. Oh, then a trip to South Carolina in Mizzou's SEC opener.

All that almost certainly hinges on the outcome of the police's action against DGB, so stay tuned. This could go anywhere.

• To die at the Rose Bowl: Spencer Hall on the last BCS Championship

• Plot twists and the ends: Bill Connelly on the Championship’s numbers