The SEC and Pac-12 send their usual hordes of junior and redshirt sophomore talent to the NFL, a handful of schools hang onto stars for one more year, and it's time for big-name prospects to turn into big-name college football players at several power programs.

A record number of underclassmen are declaring for the 2014 NFL Draft, leaving plenty of FBS schools with some unwelcome holes to fill. This year, some of the country's best programs are in that group, while others had the good fortune to retain key starters who eschewed the pro ranks despite favorable projections.

So which were the country's most fortunate programs, and which were hurt the most by defections? Let's have a look. 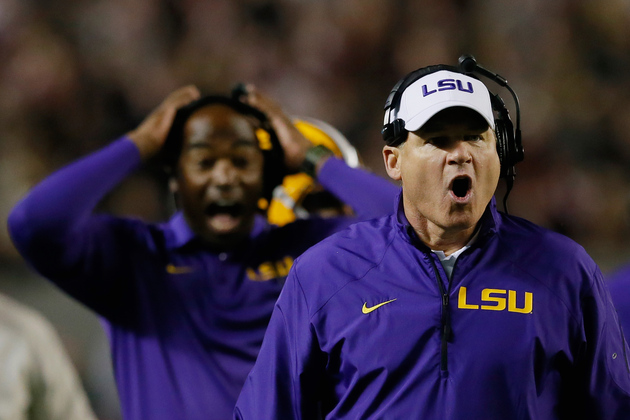 The NFL releases its official list of names on Jan. 19, which should include a record-breaking number in the mid-90s. There might be a minor surprise on there, but we essentially know all of them already, due to school and player announcements.
Here's the list of FBS early entries:

The Ducks get back quarterback Marcus Mariota and defensive back Ifo Ekpre-Olomu, who were both projected first-round selections. Mariota could reemerge as a Heisman favorite. All-Pac-12 center Hroniss Grasu is returning for another season as well.

Losing De'Anthony Thomas is a bummer, but the Ducks relied on him much less in 2013 anyway, due to injuries. Tight end Colt Lyerla is also heading for the Draft, but he doesn't really count since he left the program in October -- he was never going to be a factor in 2014.

The Badgers will have some questions at the skill positions, but it won't be because of underclassmen leaving. The bulk of their offensive line returns intact to go with quarterback Joel Stave and leading rusher Melvin Gordon, who could have headed for the pros but opted against it.

Gordon finished last season with 1,609 yards rushing despite splitting carries with senior James White, a 1,000-yard rusher himself. With White out of the way, Gordon is looking at a higher workload, and that could propel him to the fore of the Heisman race, as SB Nation's Andy Hutchins explains:

Gordon sees LSU in Wisky's season opener, a game sure to ballast his Heisman stock if he runs amok. From there he'll have every opportunity to roll up a gargantuan season stat line in Big Ten play, as the Badgers duck Ohio State, Michigan State, Michigan, and Penn State. Gordon also had just 206 carries in 2013; if he gets 250 to 275 carries and manages seven yards a pop in 2014, he'll be threatening 2,000 rushing yards as the centerpiece of a potentially Rose Bowl-bound Wisconsin team, and that same formula got Wisconsin's Ron Dayne the Heisman 15 years ago.

Even if he doesn't approach those statistical heights, Gordon's return will buoy the Badgers' mediocre passing game. It remains to be seen which guys end up supplementing Gordon in 2014, but that's a far less concerning question for Wisconsin than, "who replaces both of our 1,000-yard rushers?"

The Tigers were facing enough questions from the offensive side alone: quarterback Tajh Boyd is being joined in the Draft by junior receivers Sammy Watkins and Martavis Bryant, plus two other senior starters. So the Tigers may need to lean more heavily on their defense, which makes holding on to defensive end Vic Beasley a big deal, especially for a unit that didn't always inspire confidence in 2013.

Beasley led the ACC in sacks with 13 and finished second with 23 tackles for loss behind only Pitt's Aaron Donald, who won just about every national award that can be given to defensive linemen. That could be Beasley in 2014. His talents are obvious, and had he come out, he was likely to land in the first round.

Getting quarterback Brett Hundley and five of his top six weapons back for another season is a huge coup for Jim Mora, who should have the Bruins ready to make another run at a division title. Compared to the losses through graduation and early exits by Pac-12 South rivals Arizona State and USC, the Bruins made out like bandits.

They also have a whole lot of emerging talent to count on:

The star of the defense could quickly become linebacker and part-time running back Myles Jack, the Pac-12's top freshman on both offense and defense. And UCLA had 16 All-Pac-12 Honorable Mention players in 2013, suggesting more individual breakouts are on the way.

Jack wasn't Draft-eligible, but the point is that UCLA is in some fine shape right now.

The Tide and Tigers are here, as they are every year, because they're losing a whole bunch of talented players. But they also have the luxury of leaning on years of elite recruiting classes to help fill the holes, which is not something most programs can boast.

Hiccups could always arrive along the way, especially for the Tigers, who are losing the SEC's best wide receiver tandem, 1,400-yard rusher Jeremy Hill, and graduating senior quarterback Zach Mettenberger. But LSU is also bringing in running back Leonard Fournette, the No. 1 recruit in the 2014 class, who could quickly transition into Hill's replacement. And the Tigers do bring back rising senior offensive line starter La'El Collins.

Alabama is also well-stocked both now and in the longterm, already boasting the nation's top recruiting class two years in a row. This year the Tide are adding offensive tackle Cameron Robinson and defensive end Da'Shawn Hand, the country's highest-rated offensive and defensive linemen. Alabama could look to replace quarterback AJ McCarron with a transfer option like Florida State's Jacob Coker.

Unlike the majority of the teams losing multiple early entries to the draft, the Bears do not have an established winning program. They are coming off a painful one-win campaign under first-year head coach Sonny Dykes, and losing a handful of guys who would've been key contributors in 2014 -- especially on the defensive side -- really doesn't help the rebuilding process.

If nobody had left early, the Bears could've returned more starters than anybody in the country. That would've made year two much less painful. The good news? A couple of the departing Bears were contributors, not starters.

The good news for the Cardinal is that they won't have to replace their starting quarterback, but for a team that already knew it was going to lose a ton of starters on both sides of the ball, the early exits of offensive linemen David Yankey and Cameron Fleming and safety Ed Reynolds make reshaping the roster that much more challenging.

There might not be an FBS program better prepared for replacing a lot of offensive line talent -- the brand that David Shaw has helped establish at Stanford lends itself perfectly to doing just that. It also doesn't hurt that the Cardinal brought in a fantastic group of offensive linemen in 2012, led by five-star prospects Andrus Peat and Kyle Murphy. And Yankey already has a fill-in. Still, while they should be fine up front, there are a lot of worries elsewhere.

The Trojans have been recruiting well. But scholarship restrictions imposed on them by the NCAA leave them with a shorthanded bench for one more season, and losing five starters won't help.

That mitigates the Alabama/LSU-style advantage they would otherwise have over most of the country. The Trojans can still roll out a solid starting 22, but the early exits can lead to some more significant liabilities behind them.

The Trojans do bring back two starters who could've left: running back Buck Allen and defensive back Josh Shaw.

Can Steve Sarkisian juggle his 75 roster spots better than Lane Kiffin did, once injuries start piling up midseason?

• What to know about James Franklin at Penn State