Jordan Matthews had one final huge day for Vanderbilt's offense, and the Commodores scored the first 24 points and the last 17 points in a strange 41-24 win over Houston on Saturday.

This was a transition year for the Commodores, with basically receiver Jordan Matthews, cornerback Andre Hal, and a large supporting cast. Franklin had to play a redshirt freshman (Patton Robinette) at quarterback for half the season, and said quarterback was probably not ready for major action.

And they won nine games. At Vanderbilt. James Franklin is a hell of a coach, whether this was his final game at Vandy, or whether he's there for another 20 years.

First-half three-and-outs for Houston. The Cougars also lost a fumble and went four-and-out once. You will be hard-pressed to find a worse half of offense than what Houston rolled out for the first 30 minutes in Birmingham. Quarterback John O'Korn was 5-for-14 for eight yards in the first half. He was also sacked twice for a loss of eight, meaning 16 first-half pass attempts gained exactly zero yards.

Only a decent defensive effort and quality punting from Richie Leone kept Vandy from leading by more than 24-0 at halftime. For the game, Leone averaged 43.6 yards per punt, and Vandy's offense basically consisted of three passes to Jordan Matthews for 139 yards. 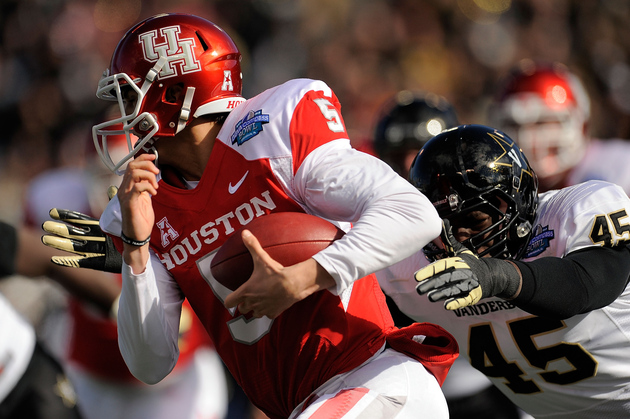 Yards per play for Houston in the third quarter.

Almost justifiably, Vanderbilt lost any semblance of intensity and focus at halftime, and to their credit, the Cougars came out with fire. O'Korn completed some passes downfield, and even though Houston's second drive of the third quarter stopped with a turnover on downs at Vandy's six, Tomme Mark forced a Patton Robinette fumble two plays later, and Houston scored on a one-play, six-yard touchdown drive to get on the board. After a Vandy three-and-out, Daniel Spencer ripped off a 62-yard run to set up a Markeith Ambles touchdown catch. Vandy three-and-out, Houston field goal. Vandy three-and-out, Houston touchdown (via 67-yard pass to Deontay Greenberry).

As awful as Houston was for the first 30 minutes of the game, the Cougars entered the fourth quarter tied. This was a strange game.

Fourth-quarter rushing yards for Vanderbilt. With Robinette completely losing the plot in the third quarter, the Commodores kept it simple late. After their quarterback threw an interception with 13:58 left, the Commodores rushed 14 times with just one pass, and it worked just fine. Jerron Seymour ripped off a 38-yard run on Vandy's next possession, and two Brian Kimbrow carries gained 34 yards and scored a go-ahead touchdown.

Percentage of Vandy's passing yards that were gained by Jordan Matthews.

This was an exaggerated version of basically what's happened for the last two or three years. Vandy's isn't exactly a pass-happy offense, but Matthews finishes his career with 262 catches, 3,759 yards, and 24 touchdowns; a solid 2,800 of those yards and 15 of those touchdowns came in just the last two seasons. He was the big-play threat for an otherwise conservative offense, and he's one of the primary reasons Vandy has won 18 of its last 26 games.

Robinette didn't have much success on Saturday, but he was five-for-11 for 143 yards and two scores throwing to Matthews and one-for-eight for 11 yards throwing to anyone else. He won't have Matthews as an option anymore next year. Hell, he'll probably have to fight pretty hard just to start again.