Cardinal players are upset with the manner in which Strong left for Texas.

Former Louisville head coach Charlie Strong has left the program for Texas after four years with the Cardinals, and the news has understandably left some of his former players upset.

Cornerback Andrew Johnson tweeted multiple times about the coach, saying "he ain't real," "he so fake" and tweeting this after one of the first pictures of Strong in Texas was released. 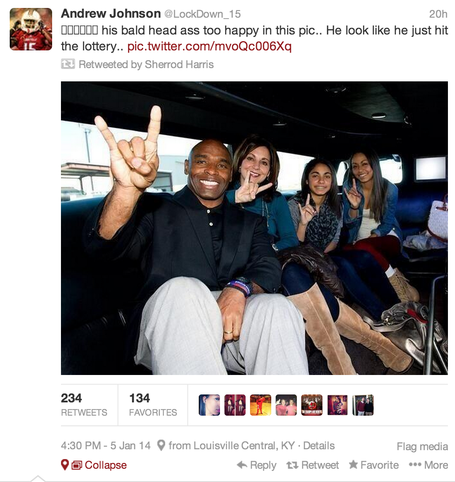 @CharlieStrongUL Thanks for everything. Wish u the best of luck at Texas. U built a powerhouse program. Just pray to god we never play Texas

A common theme of frustration for the Louisville players was Strong's lack of communication with the Cardinals -- players alleged he promised them he was staying, and did not tell them of the news first. Instead, many found out through other means.

Idc about him leaving, he could have at least told us before. Not mad at him though.

Man this sucks. We shut down our recruiting to stay loyal and committed then this happens.. It's the business. But nonetheless optimistic

Hell of a way to find out pic.twitter.com/9CgACjABki

Louisville athletic director Tom Jurich reportedly spoke to the players and attempted to fire them up, pleading patience for the program.

Jurich told players "I don't care who was wearing the headset, it's your work that built this program, and will determine our future."

Strong was introduced Monday as the new head coach of the University of Texas.