We could've done a BCS drinking game, but drinking games are for 11th-graders. Bingo is the viewing game of sophisticates.

Share All sharing options for: FSU-Auburn bingo board ends with DOUBLE BINGO

The last-ever BCS Championship kicks off at (after) 8:30 p.m. ET on six different ESPN channels, but everyone will be watching the one with Brent Musburger and Kirk Herbstreit. That one is ESPN.

We've prepared the following bingo card for your game-watching experience, based on our carefully honed knowledge of Musburger, Herbstreit, Florida State, and Auburn.

Edit: The final Bingo card of the night, and we've got a DOUBLE BINGO that came with nine seconds left in the game. Got it in under the wire, just like Florida State. 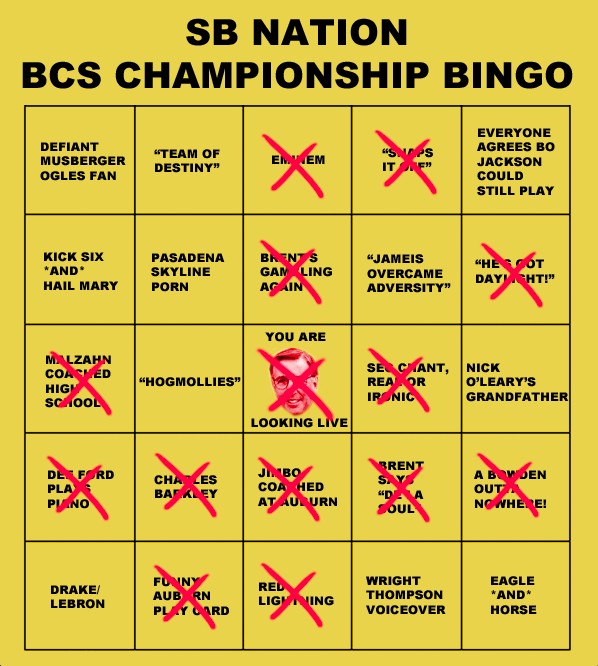 More: Tons of BCS Championship coverage before, during, and after

It's pretty much all about Brent. Jameis Winston is good at sports and all, but we know who the real star here is.

And Auburn's Tre Mason and Florida State's Nick O'Leary have famous relatives, you see. And a specific rapper appeared one way or another in every Saturday's big prime time game all season.

Note: where the card says *AND*, we mean *AND*. The bottom-right square cannot be checked off until we've seen both an eagle and a horse. We don't care whether that means Auburn's eagle and Florida State's horse, vice versa, or a horse storming the field while an eagle sings the anthem. All we demand is both horse and eagle.

What other squares are we missing here, y'all? I wanted to include one on Jimbo Fisher's atoll of a hairline tasting the Pasadena night air sans hat.

With valued contributions by Jon Bois and Spencer Hall.