The 2013 college football season is over, and the final chapter was befitting of a year that featured too many plot twists to count.

Share All sharing options for: The 2014 BCS Championship Numerical: Florida State, plot twists, and the ends

Remaining BCS bowls. Spencer Hall already wrote the definitive take on the official death of the BCS, but I'll just add this: it made things better. It really did.

Before college football's powers-that-be created the Bowl Championship Series, we had exactly what we have now: a change-resistant oligarchy run by athletic officials, bowl committee members in awful suits, and a (smaller) pool of money. Except we had no guarantee for a No. 1 vs. No. 2 matchup.

With the BCS, college football became a change-resistant oligarchy run by athletic officials, bowl committee members in awful suits, and a (growing) pool of money, which presented us with a two-team playoff at the end. It never did figure out how to fit three deserving title teams on the field at the same time, and that was occasionally a problem (1998, 2000, 2003, 2004, 2008, 2010, 2011).

But it was a step in the right direction. Hopefully the College Football Playoff represents another step or two. 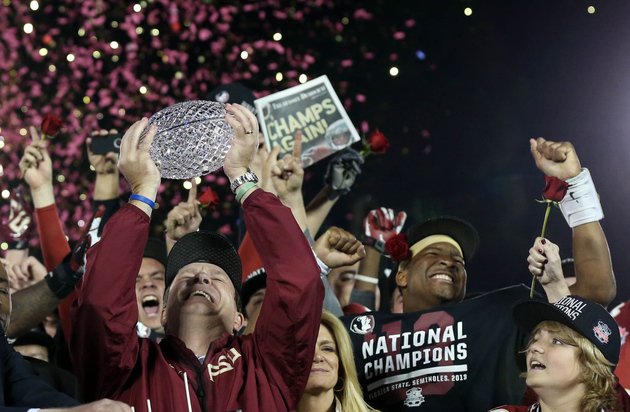 Florida State has, in the last three decades and change, easily become one of college football's blue bloods, a program everybody roots against because it generally tends to win too much. Florida State fans have had their chests puffed out further than Chuck Amato in recent weeks, and the Seminoles as a whole would have been, under normal circumstances, pretty easy to root against for a lot of college football fans, especially against a fun, out-of-nowhere Auburn team.

But Auburn is SEC, and when the clock hit zero in Pasadena on Monday night, the Internet rejoiced. No more SEC title streak! Our overlords have been defeated!

I know why this happened, of course. Gauging conference strength by which team won the national title is ridiculous -- after all, the ACC isn't suddenly college football's best conference -- but nobody pounded you over the head about the SEC's seven-year streak of national titles more than the SEC itself. Today, the SEC is still the most consistently fantastic conference in college football, just like it was yesterday. (The Pac-12 is gaining ground in a hurry, by the way, and really might have been better in 2013, but that's another discussion for another day.)

But the streak is over, at least, and it feels like a minor victory for fans located in any region other than the Southeast. 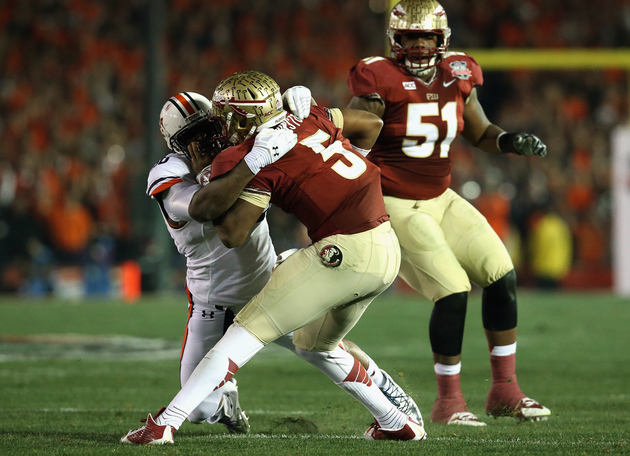 Average yards per pass attempt for Jameis Winston on FSU's final five possessions of the first half.

The beginning of the game was innocuous enough; Auburn went three-and-out after quarterback Nick Marshall just barely missed a wide-open Ricardo Louis on third down, and FSU drove down the field for a field goal. Winston completed three of five passes for 43 yards and was sacked on the initial drive, and after another Auburn punt, FSU got the ball back near its end zone, up three points, with 6:21 left in the first quarter.

Winston's final 11 pass attempts of the first half would gain 12 yards. He completed three of 10 for just 19 yards and was sacked once; plus, he lost a fumble on a short rush midway through the second quarter.

Auburn's goal is simple: the Tigers want to confuse you. On offense, they combine misdirection with extreme talent and speed, and they have a counter for whatever you want to do. In the SEC Championship game, Missouri tried as hard as it could to avoid over-adjusting for Auburn's pre-snap motion, and it allowed AU to create numbers advantages to the motion side of the field.

FSU, on the other hand, was bound and determined to follow the motion and prevent Auburn from creating those advantages, so the Tigers just beat FSU with counters and misdirection and play-action.

On defense, meanwhile, the goal was the same. Auburn's game plan was to confuse Jameis Winston and hit him as many times as possible. It worked brilliantly. A Florida State line that is big and strong -- but much better in run blocking than pass protection -- couldn't get a read for where Auburn was sending extra pass-rushers, and Winston was constantly hurried in his reads, both by Auburn pass-rushers and phantom pass-rushers.

FSU had the tendency to start slowly at times in 2013, easing into the game plan by remaining vanilla and forcing opponents to stop their physical base offense before working the pass into the equation.

That was not the case on Monday night. The Seminoles attempted passes on six of their first 10 standard-downs opportunities and ran just 53 percent of the time on standard downs in the first half despite actually running quite effectively (6.3 yards per carry in the first half, not counting sacks or fake punts). They put the ball in their Heisman-winner's hands, and some combination of this huge moment and Auburn's confusing game plan and defensive speed prevented Winston from playing his best.

Auburn derived a more than 200-yard advantage from field position.

Auburn derived a more than 200-yard advantage from field position, and entering the fourth quarter, you could have honestly made a case for Tiger punter Steven Clark as the game's most valuable player. Combine his punting with lovely fumbles luck (FSU fumbled once, Auburn fumbled twice, and Auburn recovered all three) and just plain better execution (first half: AU 5.7 yards per play, FSU 5.1), and FSU was frankly a bit lucky to be down only 21-10 at halftime and 21-13 after three quarters.

In the fourth quarter, however, things took a turn, both in the field position and special teams battles. First, P.J. Williams picked off Nick Marshall near midfield, and LaMarcus Joyner fell on the ball when Williams fumbled on the return. FSU started the ensuing drive at its 44-yard line and drove 56 yards in just five plays to get to within 21-20. Auburn responded with its best drive in two quarters, a lengthy, six-minute field goal drive that moved the chains four times and worked the clock under five minutes. But after total special teams domination for Auburn through 55 minutes, FSU's Kermit Whitfield returned a Cody Parkey kickoff 100 yards for a touchdown and FSU's first lead since 3-0.

We were only getting started, of course.

Length, in yards, of Tre Mason's final run of the season.

Really, it was the perfect Tre Mason run, a jaunt that combined vision, then quickness, then speed, then power. While we were preparing (hoping) for the idea of overtime in the BCS title game, Mason had other ideas, giving the Tigers a 31-27 lead with just 1:19 remaining. For the game as a whole, Mason was magnificent. Of course he was. He finished with 34 carries for 195 yards, plus he caught a perfectly executed 12-yard swing pass and gained 30 yards on the game-ending lateral festival. 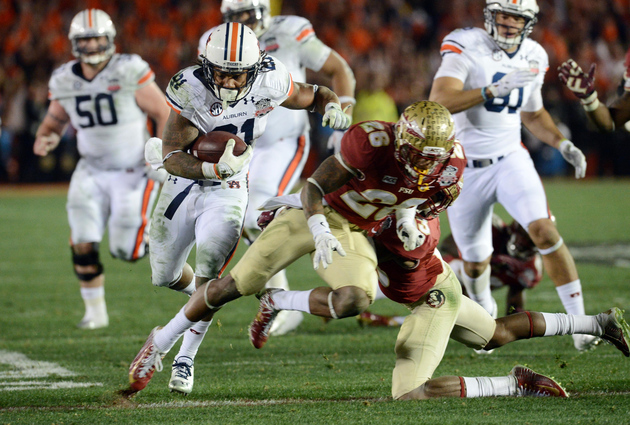 In what were probably his final six games as an Auburn Tiger, Mason averaged 31 carries and 177 yards per game, and he did so against some of the top run defenses in the country: Alabama (third in Rushing S&P+ heading into bowl season), Florida State (fifth), Georgia (23rd), and Missouri (24th). As good as Gus Malzahn is at crafting a devastating offense, he needed extreme talent to get Auburn to the national title game. In players like Mason, quarterback Nick Marshall (who definitely struggled with his reads against FSU's fantastic defensive front), linemen Greg Robinson, and Reese Dismukes, etc., he had it.

After a tense but not particularly incredible first 50 minutes, this game achieved rarified air in the final 10 minutes.

Length, in yards, of The Drive.

When Whitfield scored, the second thought we all had (after "Holy moly, that guy's ridiculously fast") was "FSU gave Auburn too much time!" The table had been set for Winston, the Heisman winner, to take the ball, down four with five minutes left, and put together a Heisman-worthy, championship-winning drive. Whitfield changed the dynamics by immediately giving FSU the lead, but in the end Mason almost did FSU a favor right back, scoring with 79 seconds left and giving FSU one last shot. The Seminoles took advantage.

Now, this will go down as Winston's "Heisman moment," I'm sure, and that's fine. In his final two drives of the game, Winston completed nine of 10 passes for 117 yards, averaging 11.7 yards per pass attempt after managing just 3.4 per attempt (!) through the first 47 minutes.

But as was the case all season, Winston's receivers did him plenty of favors down the stretch. (It was only fair after their drops did him no favors earlier in the game.) First, Rashad Greene caught a short pass, burst ahead of two colliding Auburn defenders, and raced for 49 yards down the sideline.

Then, after a couple of short passes and penalties, Winston did what he did often in the red zone in 2013: he looked for Kelvin Benjamin. The enormous redshirt sophomore had caught just three of seven passes on the day, but on first-and-goal from the Auburn two with 17 seconds left, Winston took the snap and immediately fired high toward the middle of the end zone; Benjamin positioned himself perfectly and caught an easy touchdown pass.

After one final Auburn attempt at a lateral-heavy miracle, Florida State was the national champion.

Really, this game went against the script. Florida State wasn't the dominant team fending off the scrappy underdog, and Auburn wasn't the team scoring in the game's final seconds. Instead, to win the title, the Seminoles had to find their scrap and channel their inner underdogs. They hadn't had to do that all year, but title teams rarely get away with winning a title without some serious gut checks. Florida State basically had all of its gut checks in one game.

Days until the 2014 regular season begins.

So that's it then. The 2013 college football season followed a fun arc. It spent two months building up an impenetrable set of ruling teams -- Alabama, Florida State, Ohio State, Oregon, Stanford, Baylor, Louisville -- then broke them down, one by one.

As it tends to do, November threw us some incredible plot twists (let's just say that nobody saw Auburn, Michigan State, South Carolina, and Missouri all finishing in the top five coming on November 1), and January brought us some incredible games. All 12 January bowls were within one touchdown in the fourth quarter, and the final BCS Championship game was one of the best we've seen.

And now the offseason begins. We'll make it through this together.

• Goodbye to the BCS (which died Monday)