The Heisman Trophy front-runner was suspended Thursday after Georgia saw fit to investigate whether he'd broken NCAA rules. Here is everything we know about the man who wanted Gurley's dealings made public.

Share All sharing options for: Florida fan shopped Todd Gurley story due to autographs 'losing a ton of value'

Bryan Allen is a sports memorabilia dealer. He co-owned and operated a shop based in Rome, Georgia by the name of Players. Its storefront closed in early 2013.

Among other things, Players sold autographs by Georgia running back Todd Gurley:

Allen was out of the news until October 10, when ESPN reported he's retained a lawyer.

Ed Garland, who has represented former Baltimore Ravens linebacker Ray Lewis, former NHL all-star Dany Heatley and rapper T.I. in high-profile criminal cases, told ESPN.com on Friday that he has been retained by Bryan Allen, a sports memorabilia dealer, whose relationship with Gurley is being investigated by UGA officials.

2. What do we know about Allen and Gurley?

The report of Allen hiring a lawyer arrived after Georgia's suspension of Gurley for allegedly breaking NCAA rules. According to multiple reports, Georgia is investigating Gurley's alleged selling of his own autographs.

Allen's name matches the name and email address attached to this email, sent to SB Nation's Spencer Hall two weeks ago. At the time, we verified the email's author was indeed an online college football memorabilia seller. The account was used to buy and sell autographed memorabilia. It shipped from Villa Rica, Georgia. We chose not to pursue.

In that email, Allen claimed to "have video of Todd Gurley doing a private autograph signing from last march [sic]," but said, "The video [...] doesn't show the money exchange."

"He has been paid thousands of dollars for his stuff over the last 18 months," Allen said. "I personally paid him for this signing on the video. I have bought and sold game used equipment from him."

Allen mentioned in the email that he lives in Georgia.

3. How did Allen respond?

Thursday, after UGA suspended Gurley, SB Nation's Steven Godfrey called Allen. Godfrey identified himself as a reporter. Allen confirmed his name and state of residence, saying he couldn't talk, because "Gurley got suspended."

Godfrey called again at 9:31 p.m. ET. Allen denied he was the former co-owner of Players and the operator of the specific eBay account. He refused to explain how his email address and cell phone were included in the message sent to Hall. He said he did not know who Gurley was and said he was not a sports fan.

"It's none of your damn business what I do, you or anyone else," Allen said.

SB Nation compared Allen's voice on the phone to the voice of a man in a 2013 YouTube video presented as Bryan Allen, the owner of a Rome fan shop named Players, and found it to be the same.

We checked his email for signs of a spoofed address and found none. The email address used to contact Hall matches the registration for Players' former website, which also lists Allen's name.

We found that Allen's last known town of residence matches the town from which his eBay account shipped.

Allen offered to "clear his identity" by arranging an in-person meeting with SB Nation and his legal counsel. When pressed for a meeting location and time, Allen said, "I can't talk to you right now."

Allen said that "25" other people were calling him, including ESPN and Sports Illustrated.

His cell phone was disconnected by Friday morning.

4. What do his claims have to do with UGA's investigation?

Friday, Deadspin published a story appearing to describe the same individual. Deadspin received an email similar to SB Nation's on the same day. That email and subsequent emails included the same allegations, same time frame, and same promises that the story would be all over ESPN once published. (ESPN's report also included lines from a similar email, identified as being sent by Bryan Allen, from the same day.)

So a lot has happened since I talked to you. I have spoken to people at the [University of Georgia] compliance office directly about 15 times this week. Their lawyers called me and I know they drove about 3 hours to meet with someone today.

5. Why might an autograph dealer try to damage an athlete?

I spent a few grand on the signing and Gurley has since kind of screwed me by doing this with about 30 other guys. The stuff has lost a ton of its value. Just wanna recoup some of my money.

Also, based on Allen's social media presence, he is a Florida Gators fan. His Facebook page, which referenced Players and the "ballensempire" name he used for his eBay account, included photos of him in Gators gear and Florida-related meme photos. His Twitter account followed and had recently retweeted several Florida sports-related accounts.

Both accounts were removed Thursday night. (LinkedIn and Google+ accounts listing his name and bio are also gone since Thursday, and his eBay account has a new name as of Thursday night.)

Before Georgia's 2012 win against Florida, the following appeared on his Facebook page: "Today is the day we make a statement to the puppies and the rest of the country... The Gators are back!"

And after the game: "Obligitory game post.... Yay....UGA won. Now come to my store and support your stupid Dawgs!" 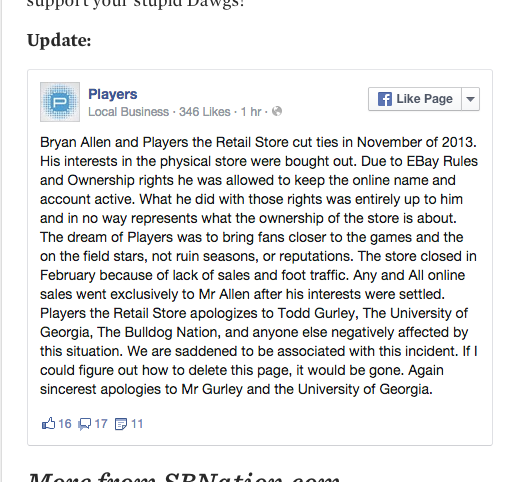