The 119-point TCU-Baylor game, scored as a 12-round heavyweight fight

Baylor and TCU went 12 full rounds, and each scored late knockdowns before the Bears prevailed in the final second. What does this mean for the Big 12 race? Hell, what does it mean for the direction of college football?

Share All sharing options for: The 119-point TCU-Baylor game, scored as a 12-round heavyweight fight

Only a couple of years ago, Baylor's McLane Stadium was just a bunch of dirt by the Brazos River. It makes it too easy to draw reference to Baylor games as sandlot, "draw up plays" pick-up ball. But how are you supposed to avoid making those references after you watch Baylor and TCU do what they did on Saturday?

On the same day that Alabama and Arkansas clobbered each other over the head for 60 minutes in a 14-13 decision, and on the same day that Michigan and Penn State field goal'd each other to death in an 18-13 finish, TCU and Baylor combined for 119 points, 1,267 yards, 62 first downs, and 14 touchdowns and still found time for 11 punts.

TCU had as many passing yards as Penn State and Michigan combined, and that's with TCU's Trevone Boykin being drastically out-passed by Baylor's Bryce Petty. Baylor attempted 15 more rushes than Alabama and added 55 passes. TCU had four sacks, nine passes defensed, two forced fumbles, seven quarterback hurries, and still allowed 7.2 yards per play. There were 15 rushes of at least 10 yards, 26 such passes, 20 penalties, 39 possessions, and 198 plays.

It would get boring if every game were like this -- five hours long, countless stoppages (usually before kickoffs), et cetera. But for the second time in four years, these two teams played a classic in Waco, one that said as much about the identity and direction of college football as anything else.

Both teams made strong defensive plays, and neither team missed a significant number of tackles. But there were so many plays, so many long balls, so many defensive risks, so many potential knockout blows.

Sometimes technically sound, slower fights can be gorgeous and appealing, and sometimes you just want guys throwing haymakers for 12 rounds. Allow me to make my one Gatti-Ward reference of the season. Granted, the ninth round was the classic in Gatti-Ward I, not the 10th and 11th, but it's worth it to relive this one anyway.

Our sites on these schools

Our sites on these schools

Baylor takes the ball first, converts a fourth-and-2 from near midfield, and gets a first down at TCU's 27. But Petty is sacked and knocked out of field goal range, and he can't hit Clay Fuller on fourth-and-16. TCU takes over and converts a pair of third downs, then Boykin finds Kolby Listenbee on a 35-yard lob on third-and-16. Touchdown, TCU.

Baylor's slow start continues. Linwood fumbles at the TCU 35, Boykin again hits Listenbee (this time for 51 yards), and then TCU goes up, 14-0. The round ends with three straight three-and-outs, strangely enough -- two by Baylor and one by TCU.

The action picks up. The final four minutes of the quarter feature part of five possessions -- TCU again goes three-and-out, and Petty lands an uppercut in the form of a 66-yard, perfectly-in-stride bomb to Antwan Goodley. TCU goes three-and-out for a third consecutive time, and Baylor needs only 90 seconds to drive 57 yards and kick a field goal. TCU takes over deep in its own territory as the quarter ends. It featured four scores, a turnover, a turnover on downs, and five three-and-outs. That's a full three quarters of action in a Vanderbilt game. 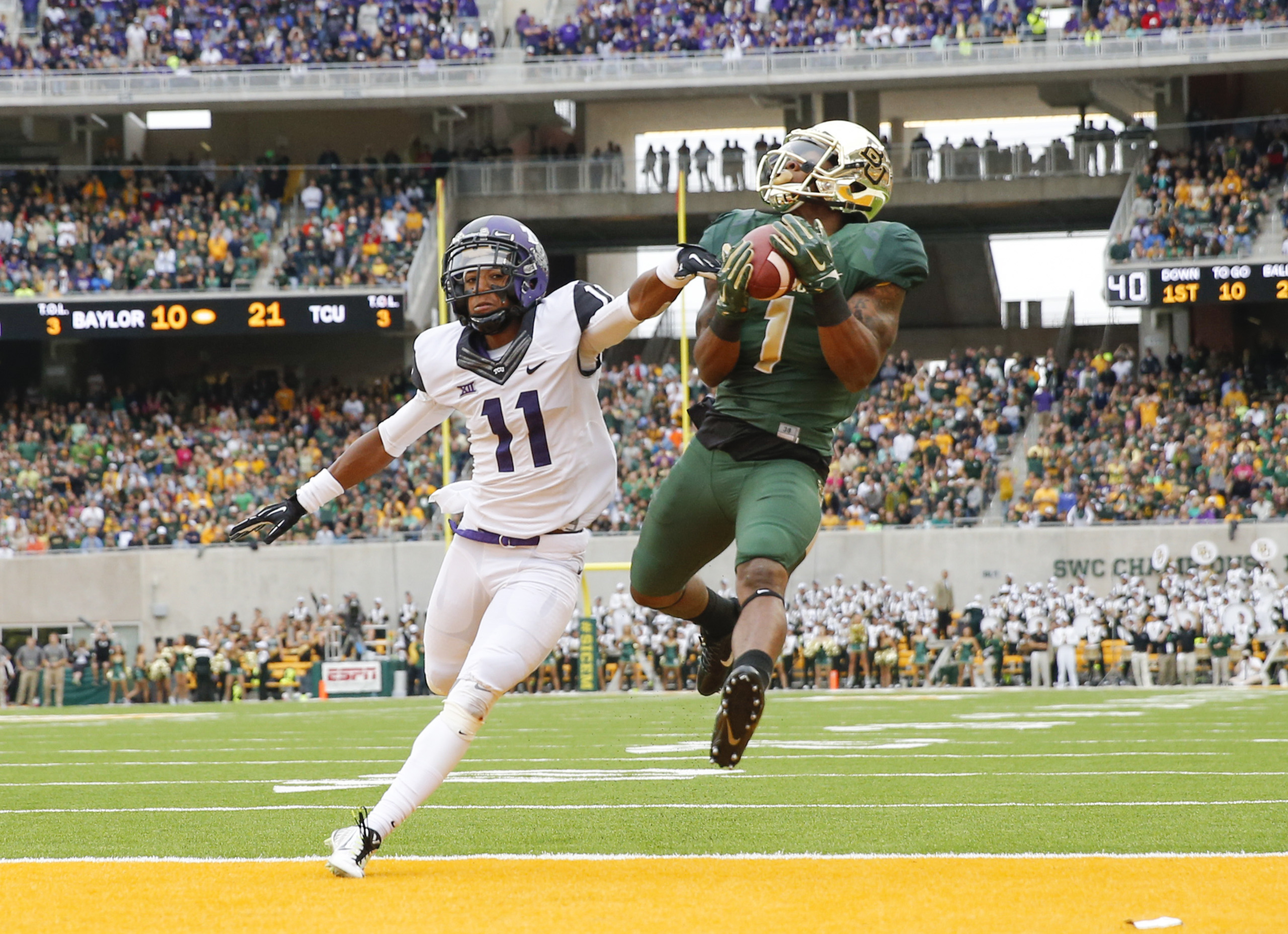 Baylor plays with fire but manages to respond. Petty and Goodley connect for 10 yards on third-and-9, and Devin Chafin rushes for eight yards on fourth-and-2 to get into TCU territory. Petty hits Corey Coleman for a 29-yard touchdown to make it 21-17, and TCU goes three-and-out again after a third-down sack by Bryce Hager. Baylor goes four-and-out -- Chafin is stopped for two yards on a confusing fourth-and-5 call, and TCU gets the ball back.

Both teams have been moving quickly, but aren't always going somewhere.

Time for some haymakers. A couple of nice Boykin rushes set up a field goal and a 24-17 lead. Baylor needs only four plays to tie the game, thanks to a 67-yard bomb to KD Cannon. Catalon returns the ensuing kickoff for a touchdown. Baylor punts, and TCU, up 31-24, has the chance to finish the half with either a field goal or a pin-'em-deep punt. But a bad punt snap from midfield lands in the hands of Baylor's Shawn Oakman with just one second left. Baylor hits an unlikely 29-yard field goal at the buzzer, and instead of being up by seven or 10 points, TCU's up just four at half.

Scorecard: An epic 10-10. Midway through the fight, TCU has won three rounds to Baylor's two.

After that explosion, there's a lull. TCU drives into Baylor territory but is forced to punt from the 39. Three rushes get Baylor to its 23, but Petty is picked off by Kevin White. TCU kicks a 20-yard field goal, but Petty finds Goodley for 18 yards. Baylor gets the run going and kicks another field goal. 34-30.

TCU strikes big and gets lucky. With Baylor calling a run blitz on third-and-1, Aaron Green gets through the line and finds open field. He rushes for 41 yards into the Baylor red zone but loses the football. Josh Doctson falls on the ball at the Baylor 2, and TCU scores on the next play. Baylor goes three-and-out, and Boykin again finds Listenbee on a 45-yard bomb. The drive stalls, and Jaden Oberkrom kicks his third field goal on fourth-and-3 from the Baylor 20. 44-30, TCU.

Teetering on the verge of a knockdown round, Baylor comes right back. Petty hits Jay Lee for a 47-yard touchdown to make it 44-37 again. And on the final play of the third quarter, TCU hits a trick play -- sophomore receiver Cameron Echols-Luper takes the ball on an end-around, then fires downfield to Catalon for a 59-yard gain. We're rolling now.

We have a knockdown! Green finishes off the TCU drive in the end zone, and the Frogs take a 51-37 lead. Baylor converts a fourth-and-1 by the skin of its teeth, but on third-and-10 from the Baylor 46, Petty doesn't see TCU's Marcus Mallet drifting into coverage and hits him right in the numbers. Mallet picks the ball off at the Baylor 49 and takes it for a touchdown. For the second straight week, TCU gets a fourth-quarter pick six to all but seal a huge win.

But two individual unsportsmanlike conduct penalties mean TCU is kicking off from its own 10. Baylor takes the kickoff back to the TCU 45, and needs only four plays -- all rushes, strangely enough -- to score. Chafin takes the ball in from seven yards out, and it's 58-44. Baylor's still in serious trouble, but the penalties made the response drive pretty easy.

TCU is smart enough not to go into clock-killer mode already -- for a hurry-up offense, you kind of have to keep being yourself with 10 minutes left. The Frogs convert a third-and-6 and get to midfield, but the drive stalls, and they pin the Bears at their 8 with 8:02 left.

A pass interference penalty and two passes to Coleman get Baylor to midfield. Then Linwood rips off a 22-yard run. Petty and Goodley connect for a 28-yard score with 6:39 left. 58-51. And then TCU goes three-and-out. Uh oh.

A 21-point lead in the fourth quarter triggers garbage time in my ratings. The leading team has a better than 95 percent chance of winning at that point. But it took Baylor barely six minutes to catch up. When you create 90 minutes of action in 60 minutes, garbage time doesn't apply quite as quickly.

Regardless, TCU settles down and goes about trying to score without giving Baylor the ball back. Catalon rushes for a first down, and Boykin hits David Porter for nine yards on third-and-8. But he can't convert another third-and-8, and TCU punts from midfield.

Now, it's difficult to question too much of TCU's offensive game plan when the Horned Frogs gained 485 yards and scored 58 points (well, 44 offensive points) against a defense that hadn't allowed much of anything all year. But either because of play-calling or because Baylor baited him into thinking it was open, Boykin threw far too many fade passes on Saturday, especially as TCU advanced into Baylor territory and the field got shorter. And instead of going with an easy slant or short pass, he lobs it to Doctson on fourth-and-3. Ryan Reid either plays good defense or commits pass interference (depending on your fan allegiance), but the ball falls incomplete, and Baylor takes over at its 45 with 1:11 left.

It feels like the game is already over at that point, but TCU stiffens. After Linwood gains 12 yards in two carries, the Frogs force two incompletions to set up third-and-10. Petty lobs the ball to Norwood, but it's broken up rather perfectly by Corry O'Meally, who looked back for the ball, then swatted it away as it reached Norwood. Only ... O'Meally is called for the pass interference penalty that didn't afflict Reid a few plays earlier.

Three rushes get the Bears to the TCU 11, and that's that. Chris Callahan boots his fourth field goal of the day, and Baylor wins.

Scorecard: Baylor 10-9. On the cards, this goes down as a 114-114 draw. But college football doesn't do draws. Thanks to two Round 11 knockdowns, we'll say Baylor gets the controversial majority decision.

Baylor fans react to THAT

More than a game, this was an experiment in tempo. What happens if two top-15 teams battle away in a close game with no interest whatsoever in slowing the game down? What if those teams also have big-play defenses adept at taking risks and creating easy scores? You get a game with big runs, bigger passes, even bigger returns, and plenty of big defensive plays to boot. It took a football trend to its logical extreme.

TCU averaged only 5.4 yards per play (worse than the national average but better than what Baylor had allowed to date), and a full 51 percent of Baylor's plays gained three or fewer yards. But there were so many plays and so many possessions that between the 11 punts, four turnovers, three turnovers on downs, and seven field goal attempts, the teams still managed to combine for more touchdowns than Connecticut, Eastern Michigan, Kansas, Kent State, Penn State, San Jose State, SMU, Southern Miss, UL-Monroe, USF, UTSA, or Wake Forest have scored all year.

This was an exhausting experience, one that featured a dramatic comeback, which seemed so inevitable it almost forgot to be dramatic, and a frustrating finish.

And more importantly, it gave Baylor a win that both the Bears and Bob Stoops' Oklahoma Sooners needed. TCU was 10 minutes from taking complete control of the Big 12 race, with all the Playoff implications that would have entailed. Instead, we've got a potential three-team race to look forward to (spoiler alert: the Big 12 will get the Win Projection Wednesday treatment in a couple of days), with Kansas State hanging around and waiting to wreck some dreams.

In what is becoming one of the Big 12's best rivalry games, Baylor survived and advanced.