Mississippi State and Florida State are both unlikely to finish undefeated, Oregon and TCU are both well-positioned for a bid, and are you prepared for 11-1 Nebraska and Duke teams crashing the party?

The College Football Playoff committee released its first rankings to great fanfare. The list is sensible, with proper credit given to teams with good wins and/or acceptable losses, and there is a pretty obvious explanation for why and where these rankings differ from, say, the AP Poll or F/+ rankings.

Ole Miss ranks three spots higher via the committee, thanks both to the win over Alabama and, in theory, a lower level of recency bias (the Rebels lost just last week) in the committee room. TCU ranks three spots higher than in the AP poll, potentially because it wasn't dragged down by preseason rankings. Notre Dame, lacking any sort of marquee win, ranks four spots lower than in the AP poll.

We'll see how things like recency and conference leads factor moving forward. I still feel it's misguided for the committee to put out weekly updates. It serves no purpose but to open up opportunities for unexplained movement and criticism. Still, this was a pretty good start. Now let's figure out what to expect moving forward.

Each Wednesday, I've been using the F/+ rankings and the win probabilities derived from them to peer into the future a bit. (For example, here's last week's ACC piece.) Odds change as more evidence becomes available and the rankings themselves shift, but it's a good way to look at odds, expectations and potential pratfalls. With all of the power conferences now getting updated each Wednesday at Football Study Hall, let's turn our gaze here to the national title race.

We'll start with the most obvious question. Of the teams ranked in the committee's current top 25, which ones are the most likely to finish with the best records?

Win probabilities for each ranked team 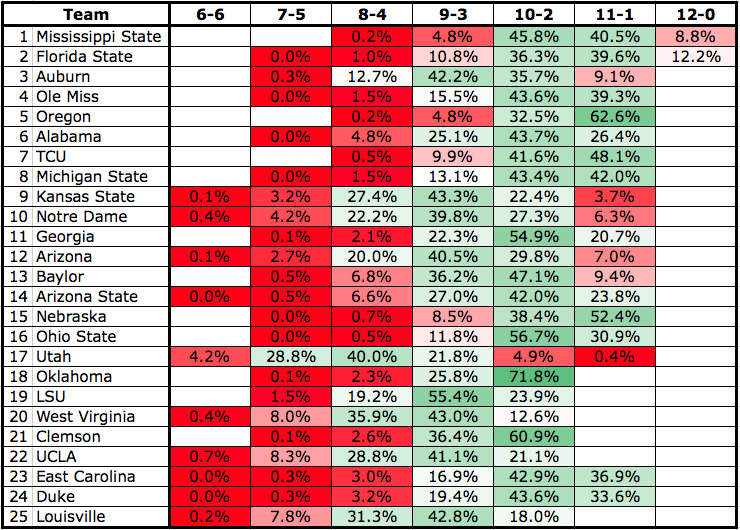 With trips to Ole Miss and Alabama on the horizon, Mississippi State, No. 4 in the current F/+ rankings, doesn't have the greatest chance in the world of finishing undefeated. But there's still about a 1-in-2 chance that the Bulldogs reach the SEC title game (if they qualify) at 11-1 or better.

Meanwhile, it appears Oregon and Nebraska have the best chances to reach their respective conference title games with just one overall loss.

If the season ended today

Here's the best guess as to how the six big New Year's bowls would look. The top four in the rankings go to the Rose and Sugar semifinals, with No. 1 getting its closer site. Conference ties determine the Orange. The top non-power-conference team is guaranteed a spot. And the committee matches up the other three games according to geography and appeal.

Let's get to some obvious questions.

One of the most interesting parts of last week's ACC projections was the slack FSU does not get moving forward.

FSU has crept back into the F/+ top 10 and is still getting slight dings for Winston missing the Clemson game and for Oklahoma State's J.W. Walsh getting injured right after the FSU game. So all of the Seminoles' win probabilities are probably slightly low because of that. [...]

A lot of our assumptions, however, are premised around the helmet FSU wears. If Clemson were 7-0 with a few close wins, we wouldn't trust that the Tigers would continue to win. If Louisville or BC were in this position, we really wouldn't trust it. Because FSU won the national title last year, and because we recognize so many star-caliber names on the two-deep, we perhaps justifiably assume the 'Noles will be just fine. I know I do.

With road games remaining against two good teams, the win projections weren't incredibly kind to FSU last week. And with Miami's dominant win over Virginia Tech pushing the Canes to 16th overall in the F/+ rankings, FSU's odds aren't any better this week. I don't think you'll find too many people willing to bet on FSU losing to both Louisville and Miami in the coming weeks, but the numbers are pointing out that it's at least a possibility.

Nebraska and Duke? What?

Nebraska has crept up to 13th in the F/+ rankings. The Huskers don't have much to offer beyond Ameer Abdullah's rushing yards, but that alone has gotten them into the top 30 of Off. F/+. Meanwhile, the defense is up to 13th thanks to a lack of true weaknesses and an occasionally great pass defense.

It also really likes Duke, though that's more a function of schedule than quality. The Blue Devils do rank a relatively healthy 28th overall, but that's not exactly the level of a national title contender.

But here's their remaining schedule: at Pittsburgh (38th), at Syracuse (76th), Virginia Tech (30th), North Carolina (59th and rising) and Wake Forest (89th). Pitt is occasionally great and occasionally awful -- the proverbial crazy guy in the fight, capable of ripping off 300 rushing yards or seven fumbles in a single game -- which makes that game a bit of an unknown. Survive Pitt, however, and Duke will be favored in each remaining season game, perhaps by a decent margin. That would put them in position to potentially steal a Playoff bid with an upset of FSU. And while the Blue Devils have to leap a ton of teams for this shot, remember the "we'll place extra value in conference titles" committee proclamation.

(That Duke-FSU upset obviously isn't likely. Just consider yourself warned that "Duke could make the Final Four!!!" might become a story line we actually discuss in about five weeks ... as long as the crazy guy in the fight doesn't take the Devils down this weekend, anyway.)

How does the committee react going forward?

This is a huge question.

More intrigued by next week's @CFBPlayoff rankings than tonight's, because we'll get to see how rankings react to top-10 game.

No.3 and No.4 play one another this weekend. No.5 is definitely better than the loser of that game. - Poll Logic. Not sure about committee.

The first iteration of this top 25 was good about giving heft to good wins, avoiding giving extra weight to recent losses, et cetera. But does it simply end up reacting to results like a poll would moving forward? It's easy to look at those probabilities above and figure out how things might shake down overall -- Oregon nabbing a top-3 spot, TCU putting itself in excellent position for the top 4, and whatnot. But now we get to see how the committee reacts to specific wins and losses in real time.

Looking at the above list, we see that the 11-1 cutoff comes roughly at No. 16 Ohio State. After that come either teams that are all but guaranteed to lose once or twice more (Utah) or teams that already have two losses. Let's look at the upcoming slate for the top 16 teams and Duke. If you're looking for where a team might trip up, here's where you should start. 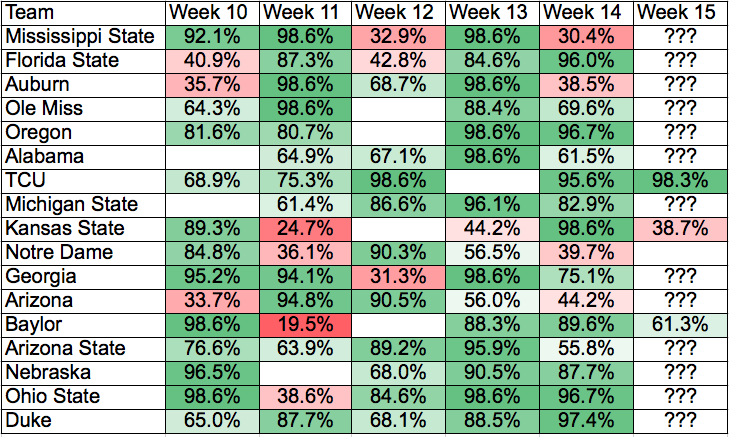 F/+ sees three teams with a very good chance of losing this week: No. 2 Florida State at No. 25 Louisville, No. 3 Auburn at No. 4 Ole Miss, and No. 12 Arizona at No. 22 UCLA. If any or all of these teams survive their tricky road trips, expect their win probabilities to jump rather dramatically next week.

For Auburn, which still faces trips to Georgia in Week 12 and Alabama in Week 14, a win is imperative. One could see a 10-2 SEC West team nabbing that No. 4 spot in certain circumstances, but nobody's reaching the Playoff at 9-3. An Auburn team that beats Ole Miss and goes 1-1 against UGA and Alabama will have an interesting case.

Meanwhile, at 12th, Arizona has no margin for error whatsoever. The Wildcats are taking on an incredibly volatile UCLA team, one that has proven capable of drubbing a good team on the road (ASU), then losing two straight at home. An Arizona win would give the Wildcats two lovely road wins for the résumé (they beat Oregon earlier in the year) and would clear the path for a bit of an elimination game at Arizona State in Week 14.

Three teams have win probabilities between 50 and 70 percent this week: No. 4 Ole Miss (hosting No. 3 Auburn), No. 7 TCU (traveling to No. 20 West Virginia), and No. 24 Duke (heading to Pittsburgh). All three have games they'd win two of three times, but that basically means if they roll a 5 or 6 on a die, they lose. Those aren't comfortable odds, and there's only about a 29 percent chance that all three win.

Feel okay about looking ahead

The other nine teams with Week 10 games are looking pretty safe. No. 14 Arizona State has a tough game against No. 17 Utah but is still given a three-in-four chance of winning. No. 5 Oregon (Stanford) and No. 10 Notre Dame (at Navy) aren't completely out of the woods, but they're relatively likely to survive.

Ohio State, Kansas State, Baylor, and Notre Dame all have pretty safe games this week, but Week 11 will be huge for them. The Buckeyes head to East Lansing for an enormous game against Michigan State, Kansas State goes to Fort Worth for an elimination game of sorts with TCU, Baylor plays at Oklahoma, and Notre Dame plays at Arizona State in a well-timed, interesting, non-conference (for ASU) battle. I'd say Week 11 is a big one, but they're all big now.

There is, of course, a missing piece in the tables above: for teams in the SEC, Pac-12, Big Ten, and ACC, there might also be a conference title game involved. It's still a bit messy to get that involved in the tables, but here are odds for what could be some of the more relevant potential championship games.

Each of the West's four potential 11-1 or 12-0 champions would have about a three-in-four chance of beating a Georgia team that is improving rapidly (and could cut those odds in the coming weeks). And of course, Georgia itself could be in position to nab a Playoff bid come December 6. This could easily become a win-and-you're-in game for both teams.

Yes, Oregon has an 81 percent chance of beating Arizona, a team to which the Ducks have already lost at home this year. Advanced stats care not for previous head-to-heads, and the Ducks have improved their standing quite a bit in the last couple of weeks.

I don't think I can call Nebraska a legitimate contender here until I see the Huskers leave Madison with a win. But from a statistical standpoint, they're a lot more legitimate than we're giving them credit for being at the moment. They have a very strong chance of winning the Big Ten right now.

FSU's odds are indeed probably a bit better than what you see above, once you take injuries and suspensions into account. Still, using the ratings as they exist above, you might be able to conclude that the most likely Playoff scenario at this point* might be something like this:

That No. 4 spot could go to a 12-1 Florida State (depending on how far the 'Noles would fall with a loss at Louisville or Miami), a 12-1 Big Ten champion (if Michigan State wins out, the Spartans are probably well-positioned for the spot, but Ohio State and Nebraska might need help), or a second SEC West team, one that is probably 10-2. We'll learn more, both about the teams themselves and the committee's reaction to big games, in the coming weeks.

* Note that the "most likely" scenario isn't particularly likely. There are hundreds of scenarios still on the table.