The Seminoles are now 8-0 and probably going to finish undefeated and reach the College Football Playoff. But are they capable of sustaining greatness for long enough to actually beat an elite team?

Share All sharing options for: Florida State and the art of only looking good when you have to

On Thursday night in Louisville, in front of a packed house at Papa John's Cardinal Stadium, Florida State did what Florida State tends to do this year: wait until the last possible moment, then hit the accelerator. The Seminoles trailed Louisville by 21-0, 28 minutes into the game, then outscored the Cardinals by a 42-10 margin the rest of the way.

Despite having yet to play a complete, elite game against a good team, they are now 8-0 with only one road game remaining in the regular season. Let's take a look at FSU's constant flirtation with disaster and what it might mean moving forward.

These are not things that tend to happen with a championship-caliber team. Flirt with death enough, and death usually fulfills the flirtation.

In the proverbial boxing match, 2014 Florida State appears content with jabbing and standing in the middle of the ring, killing as much of the clock as possible until the opponent lands a really good blow or six. The Seminoles can't relax until there's a little bit of blood in their mouths. They are willfully giving themselves less (sometimes far less) than 60 full minutes to prove their superiority, and they often give their opponents head starts on the scorecard.

But if FSU was going to suffer such a loss, the schedule tells you it probably would have happened by now.

Heading into the game, the stats told us that Louisville's defense was awesome (first in Def. F/+) and its offense was a bit on the sketchy side (63rd in Off. F/+). That made for some interesting matchups with FSU's awesome offense (eighth) and less-than-elite defense (25th).

When Louisville forced some early turnovers, punishing some iffy throws and decisions by Jameis Winston, it wasn't that much of a surprise. The script for Louisville was a win in the turnovers battle and something in the neighborhood of a 24-20 final score. Nobody holds FSU under 30 points when Winston is behind center, but Louisville was going to have to figure out how to do that.

In the first half, Louisville's offense was writing a different script. The Cardinals had drives of five plays and 73 yards, seven and 80, five and 52, and six and 43. They scored three touchdowns and got stuffed at the FSU 1. Running back Michael Dyer found space to maneuver between the tackles, and receiver Devante Parker, who was injured for much of the early season, dominated. His 71-yard catch set Louisville up for the near-score, and his 21-yard catch was the catalyst for UL's second score. Not only was FSU down 21-0, the Seminoles suddenly looked like they needed 40-plus points to win.

The lifeline: only one team converted third downs, and it wasn't Louisville.

Most importantly, on third-and-2 with under three minutes left, down 35-31, Gardner threw a fade pass to Parker, and it fell incomplete. On fourth down, his throwback pass to tight end Charles Standberry was a bit too long. (The play-calling on that drive was ... curious.)

The Seminoles are still the reigning national champs, and you probably aren't going to beat them by forfeiting third downs like a CFL team. 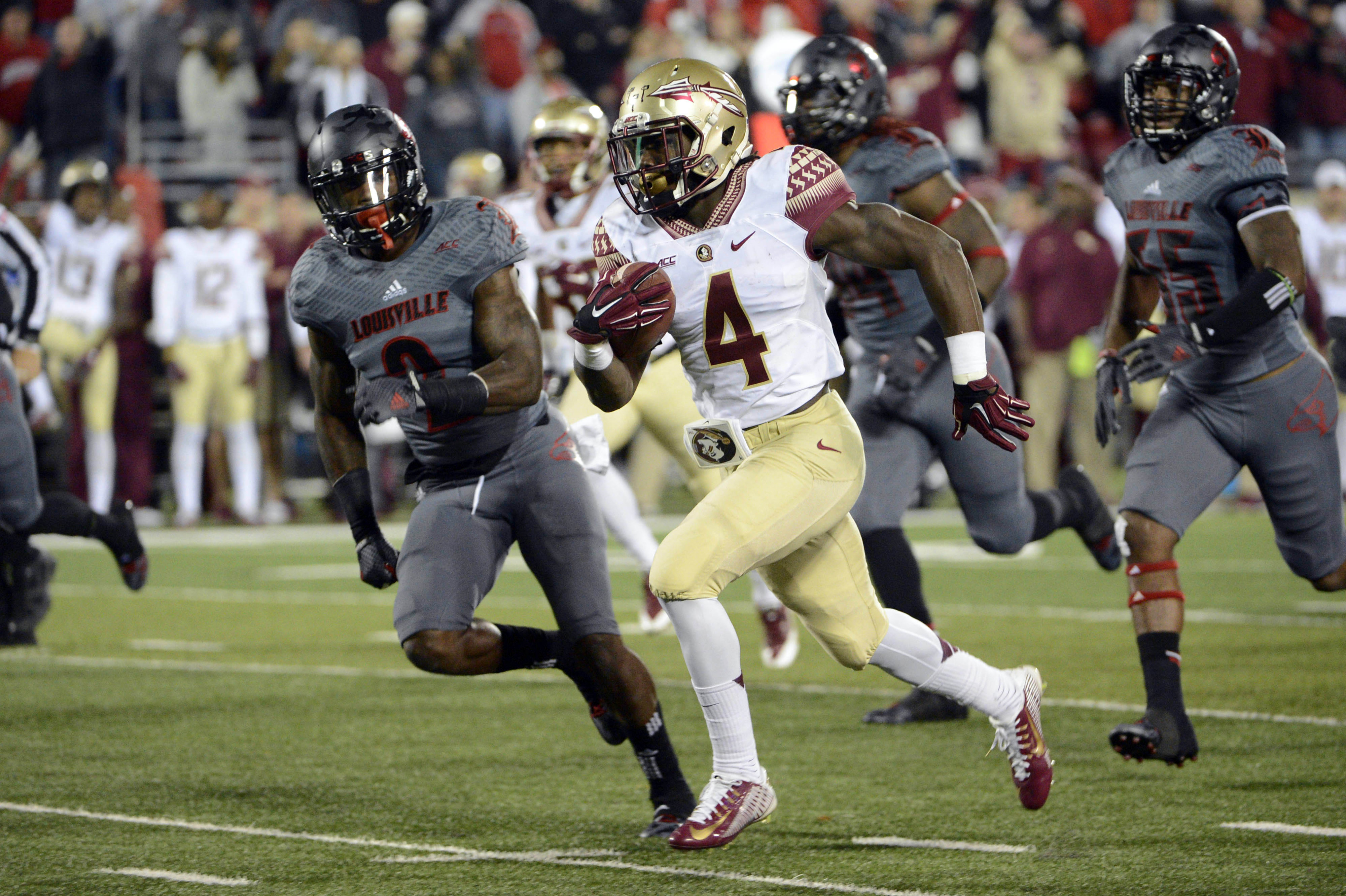 One of FSU's biggest issues in 2014 has been its run game, or lack thereof. The Seminoles try to establish the run, fail, and fall behind on the scoreboard; then, when they absolutely need to move the ball, they abandon the run and put all their hopes on the arm of Winston ... and Winston makes that work.

With anything less than an incredible quarterback, FSU would have lost at least one game by now.

Karlos Williams, he of 8.0 yards per carry and 11 touchdowns in 2013, hasn't been able to get rolling. He's averaging just 4.6 yards per carry, and despite being a 225-pound block of granite, he hasn't been effective in short-yardage situations. Against Louisville, he gained 72 yards in 16 carries (4.5 per) and got stuffed on what could have been a key fourth-and-1 attempt early in the second half.

Enter Dalvin Cook. An all-world recruit out of Miami, Cook is 6', 200, and looks like he runs a 3.9 40 with pads on. As tends to be the case for most freshmen, it has taken him a while to find his legs at the college level -- through five games, he had rushed 24 times for 128 yards (5.3 per carry), neither great nor terrible. In Williams' absence, he had what could have been a breakout against Syracuse (23 for 122) but followed with a dud against Notre Dame (12 for 20).

Cook had four carries for just 11 yards in the first half on Thursday night. He had five carries for 99 yards in the second half. He also caught four passes for 40 yards within a key, seven-play span in the third quarter. He raced for a 40-yard touchdown run to cut Louisville's lead to 24-21. Then, with 3:55 left, after a short punt gave FSU possession at the Louisville 38 in the fourth quarter, he broke through an arm tackle and sprinted down the right sideline for what would become the game-winning score.

Cook is in theory still an inconsistent freshman, but we might be looking back at Thursday night as the lightbulb-comes-on moment for both Cook and the FSU running game.

At one point, you had to wonder if Lady Luck had money on the Seminoles.

Down 21-0 and desperately in need of a break, FSU quickly drove to the Louisville 1 thanks to passes of 17 yards to Nick O'Leary, 21 yards to Rashad Greene, and 30 yards to Jesus Wilson. But Louisville forced a third-and-goal from the 1 and appeared to have dropped Williams for a loss.

Only, Williams never cleanly got the handoff from Winston, and the ball hit the ground. It bounced around under a pile of players, slipped through the hands of two Louisville defenders, and ended up in the end zone, where O'Leary fell on it for a touchdown.

Then, on the first play of the second half, Winston threw his third interception of the night to sophomore ball-hawk Gerold Holliman. Holliman returned the ball 14 yards, but Winston forced a fumble. The ball bounced around, again slipped through Louisville hands, and FSU's Travis Rudolph recovered it. FSU ended up going four-and-out, but Louisville lost about 20 yards of field position in the exchange and ended up stalling out for a field goal at the FSU 16.

Down 24-21 early in the fourth quarter, Winston had a pass batted by linebacker Nick Dawson-Brents. Holliman stepped into the path of the ball and got both hands on what might have not only become his third pick of the day, but an almost sure pick-six. He dropped it.

In movies, fate smiles on the underdog. That's not how it worked out in real-life on Thursday night.

The best teams, the most likely championship teams, are the ones that handle their business early and put games out of reach before luck, chance, fumbles, and vital offensive pass interference calls can impact the outcome.

According to the F/+ rankings, the Seminoles have been just barely good enough to survive No. 9 Clemson at home (without Winston), No. 15 Louisville on the road, and No. 19 Notre Dame at home. They survived No. 44 Oklahoma State on a neutral field (though OSU would likely be ranked higher than 44th if quarterback J.W. Walsh hadn't gotten hurt), and they pulled away from No. 53 NC State in the fourth quarter. They pummeled No. 76 Syracuse and eventually got around to doing the same to No. 89 Wake Forest.

They have, in other words, solidified that they should be ranked around seventh to 12th in these ratings. They were 11th heading into this week, and I can't figure they'll move much after Thursday night's performance.

Since 2005, no team that has ranked lower than third in F/+ has won the national title, and no team ranked worse than ninth has reached the title game. Remember, the F/+ rating is not based on the polls in any way.

Now, there are some obvious caveats.

First, this is the first year that four teams will be playing for the national title instead of two.

Second, at this point last year, eventual No. 4 Auburn ranked just 22nd. The Tigers caught fire in November, whipping Arkansas and Tennessee, beating Georgia, Alabama, and Missouri, and not only reaching the BCS Championship game, but nearly winning it.

There's a chance that the FSU running game found itself in the second half against Louisville on Thursday night. And there's a chance that the defense that mostly shut Louisville down in the second half will be the defense we see more frequently down the stretch. Yes, we could have said almost exactly the same thing after the Clemson, NC State, and Notre Dame wins. But we know FSU has all the components of an elite team -- they show us those components about 15 to 20 minutes per game. And for all we know, there's a catalyst right around the corner.

Through eight games, however, FSU has been far more like 2010 Oregon (with bursts of dominance disguising longer spells of average play) and 2012 Notre Dame (with key, late plays allowing them to survive and advance) than 2013 Florida State.

The Seminoles now have an excellent chance of reaching 13-0, though Miami will probably be a tougher test than you think. But without sustained improvement, and without the ability to play a full 60 minutes at a high level, they will in no way be a favorite to beat two top-four teams in the College Football Playoff and win the national title.

(Here's where you simply say, "24 STRAIGHT, HATERS," Florida State fans. Or just call me a Super Geek. I don't really have a retort for either one.)