There are decent odds that both Mississippi State and Florida State lose on Saturday, which would throw college football's title race into a level of chaos not seen since 1990. Or 1984.

Forget about whether this season can match the craziness of college football's infamous 2007 season. If the projections hold up this coming weekend, we are in full-fledged 1990 territory. Here was your AP top 10 on November 20, 1990:

Zero unblemished majors. Colorado had a loss, a tie, and a fifth-down win over Missouri and was somehow No. 1. Miami had lost twice and was No. 2. Georgia Tech had begun the season unranked and tied unranked North Carolina and was No. 3. BYU, a mid-major (albeit one that had won the national title six years earlier), had suffered a road loss to unranked Oregon and was still No. 4. Florida had gotten destroyed by Tennessee and was No. 5.

If the odds hold -- and you don't even have to lean on F/+ odds; Vegas' odds say nearly the same thing -- we could enter Week 13 with zero undefeated majors. That hasn't happened since 1990, and considering Georgia Tech was 9-0-1, it only sort of happened then. You have to go back to 1984, the year BYU won, to find a year in which every major had a loss by November 16.

Of course, saying, "if the odds hold," is basically saying, "if Miami beats Florida State." So your interpretation of this depends on whether you think there's a chance Florida State doesn't charge back to win by double digits after trailing early. It's the Seminoles' specialty, and while that doesn't impress the spreadsheets, they've become reliable at it.

How this week's contenders project now:

When the College Football Playoff committee released its third set of rankings on Tuesday night, it proved four things:

1. The committee really is redrawing its list from scratch each week, trying not to fall into the "Team A won, so it moves up, and Team B lost, so it moves down" trap. They are doing admirable work in that regard, and they are proving that they don't care about taking bold steps, like bumping 9-1 Oregon ahead of 9-0 Florida State.

I was a bit confused by that specific bump, but I didn't necessarily mind it. Down for down and drive for drive, I think Oregon's been better than FSU, and the committee reminds us that, however they go about it, they are looking at quality, not just pegs on a giant transitive property board. (Of course, I also think Alabama has been better than Oregon, so ... )

2. Weekly rankings still aren't worth it. They're great for debate and hits for sports websites (which means they're great, period!), and I don't mind getting a feel for what the committee considers valuable. But all they're doing is rankling fan bases and giving ammunition to those looking for reasons to either doubt the committee's effectiveness or throw their hands up and say, "Four teams just doesn't work. We need eight."

3. The Big 12 race might show just how awkward it is to both give value to conference titles and maintain weekly rankings. Baylor now has a greater than three-in-four chance of winning out and reaching 8-1 in conference play (and 11-1 overall), which would technically give the Bears the more important share of the Big 12 co-title since TCU is the only other team that can finish 8-1, and since the Bears beat the Horned Frogs on October 11. But the committee clearly likes TCU's résumé better, since the Frogs had a tougher (not tough, but tougher) non-conference slate and have a better loss (at Baylor) than the Bears (at WVU).

What happens if/when Baylor secures the larger share of the trophy? Do the Bears suddenly get a bump? Does the committee prove in its first year that it doesn't really give conference titles extra value at all?

4. We care about the wrong things. Basically, every reaction to Tuesday night's rankings boils down to "Wait, why did [team] move up/down? They [whatever they did] last week!"

We claim we don't want the committee to have recency bias, and we want them to look at the big picture at all times. But we have recency bias, and we aren't always capable of looking at the big picture. And when rankings -- be they from a committee, from computers, or from anywhere but the good, old-fashioned poll -- disagree with our own perceptions, we rage against them. And that's fine, if we're simply looking for debate.

Here, we'll keep tabs on the top 16 teams and Duke, the lone one-loss power-conference team outside of the top 16. 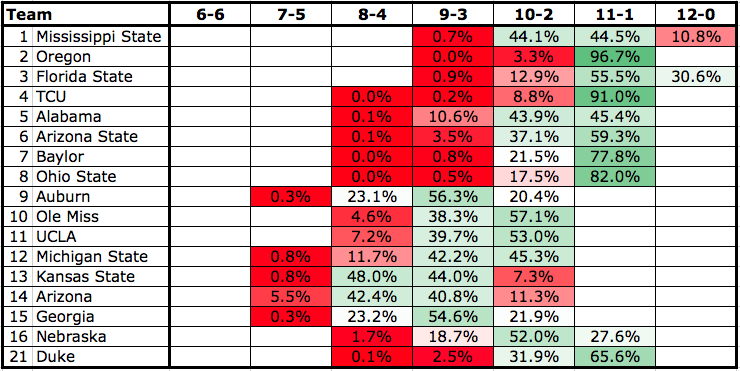 At this point, eight teams have a better than 50 percent chance of finishing 11-1, with a ninth (Alabama) coming in at 45 percent.

Those title games aren't set in stone, and Alabama is eliminated with another loss, but if the committee really is set against picking a two-loss team (or Marshall), that's your field.

A couple of top teams face enormous tests this week ... and then we all take a bye. 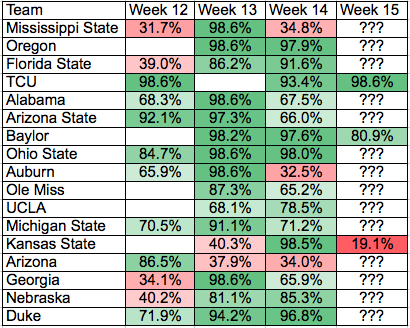 Mississippi State at Alabama. Later Wednesday morning, I'll have an SEC projections post up at Football Study Hall. The gist is this: if MSU wins, the Bulldogs are the West champions, only needing to beat Vanderbilt. They could lose to Ole Miss, win the SEC title game, and still have a lovely Playoff case.

If Alabama wins, the Tide have a 68 percent chance of winning the West and MSU has only an 11 percent chance. That's a huge range based off of a single game, and it makes this by far the most important of the weekend.

Florida State at Miami. With the committee unimpressed with either Clemson or Notre Dame (FSU's best victims), the Seminoles might have trouble locking up a spot with a loss, even if it comes on the road against a Miami team that has caught fire. You may not believe these odds -- 61 percent in favor of Miami -- but there's no doubting that this is FSU's biggest remaining challenge.

Nebraska at Wisconsin. Wisconsin's rebound has made this a much tougher game than it appeared a few weeks ago, especially if the Huskers' star running back, Ameer Abdullah, is at less than 100 percent health. Not only does NU need to win to keep faint Playoff hopes alive, Ohio State might need to beat an 11-1, top-10 Nebraska team in the Big Ten title game to have a shot.

Auburn at Georgia. This doesn't have a direct impact, but a Dawg win could be a double-edged sword. It would give the eventual West champion a higher chance of losing the SEC title game, since Georgia is the only top-35 F/+ team in the SEC East. But it would also give the West champion one final résumé boost. If MSU loses to Alabama but still manages to win the West, MSU could be in need of one extra quality win.

The only undefeated or one-loss power teams with worse than 90 percent chances of winning are Florida State (at home against BC) and Nebraska (at home against Minnesota). The national title race takes a break next week.

As always, the above projections only pertain to the regular season. Let's look at the potential conference title games, at least the ones that might have an impact on the national race.

Right now, the East title odds shake out as follows: Missouri 46 percent, Georgia 37 percent, Florida 17 percent. Saturday evening's Missouri-Texas A&M and Auburn-Georgia games will determine a bit of how that race plays out.

Only Alabama and MSU have realistic paths to the Playoff.

Arizona State is in the South driver's seat, but as the F/+ rankings suggest, ASU hasn't played like an elite team. The Sun Devils are only about 60/40 to finish 11-1. Any loss could open the door to a UCLA title.

Ohio State might need Nebraska to win out, but Nebraska would also give the Buckeyes their best chance of losing.

Duke is the likely Coastal winner, but unlike in the Big Ten, an 11-1 Duke would provide FSU with perhaps its best résumé win and with its easiest conference title game opponent. The numbers love Georgia Tech (No. 17 in F/+) and Miami (No. 12) right now.

Based on both how the committee has structured to date and how F/+ thinks the season plays out, I figure our most likely four-team field is Pac-12 champion Oregon, Big 12 "champion" TCU, SEC champion Alabama, and either 11-1 non-champion Mississippi State, 12-1 ACC champion Florida State, 12-1 Big Ten champion Ohio State, and 11-1 Big 12 champion (no quotations) Baylor.

It's hard to say what the committee might do with that glut of potential No. 4 teams, but my guess right now is this:

It is befitting of college football's psychotic personality that the first year for a Playoff might end up being the craziest season in two or three decades.

And honestly, drawing the line at four instead of two has made this year even crazier. With a two-team field, we'd be waiting for Mississippi State and FSU to lose. From a projections standpoint, we'd be looking at an Alabama-Oregon title game. But the teams that might end up battling it out for the third and fourth spots are every bit as good as the current top two teams and the projected top two teams. This has been a fascinating season, and if the odds hold, it will get even sillier.