The 4 keys to Mississippi State-Alabama, maybe the SEC's game of the year

It's been a few weeks since No. 1 Mississippi State has looked like the country's best team. A trip to No. 5 Alabama means the Bulldogs can wait no longer. Oh, and the winner is your SEC West leader. (3:30 p.m. ET Saturday, CBS.)

Share All sharing options for: The 4 keys to Mississippi State-Alabama, maybe the SEC's game of the year

Over the past few weeks, Mississippi State has taken its foot off of the accelerator.

In just three games, the Bulldogs had gone from unranked to first in the country. They beat LSU in Baton Rouge (and went from unranked to 14th in the AP), they crushed No. 6 Texas A&M (12th to third), and they handled No. 2 Auburn by 15 points in Starkville (third to first).

Since then, they have done the bare minimum. After a bye week, their defense took another Saturday off in a 45-31 win over Kentucky, their offense couldn't finish drives in a 17-10 win over Arkansas, and the entire squad cruised through UT-Martin in third gear last Saturday.

None of this matters if Mississippi State wins this weekend. The Bulldogs can't punch a Playoff ticket with a win at Alabama, but they will have erased their best remaining opportunity to lose. Alabama is first in F/+ and fifth in the Playoff rankings, and the Tide defense is playing almost as well as it has in the whole Saban era. They have allowed greater than 4.9 yards per play just twice all year (MSU has yet to average under 5.9), and their offensive demise has been drastically overstated.

Alabama has begun to look awfully similar to its previous championship versions. And if MSU wins in Tuscaloosa for just the third time since 1957, the last month won't matter in the slightest.

The MSU ground game vs. an immovable object

How MSU can run on Bama 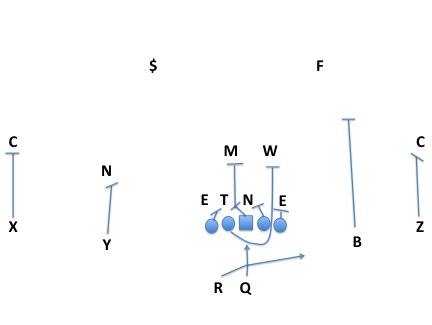 Dan Mullen’s constraint-based offense is keyed around being able to run the football against honest fronts. Manning up on MSU is an issue because of size -- Prescott is 6'2, 230, Robinson is 5'9, 215, and the starting line averages 6'5, 307 -- but bringing extra run defenders is a huge risk. When defenses try to clog the line, Prescott has completed passes of 40-plus yards to nine different receivers. The Bulldogs' play action game will quickly burn down any attempt to game their rushing attack.

Alabama says bring it on. Nick Saban often plays 4-2-5 nickel personnel and trusts his DL and inside linebackers, Trey DePriest and Ragland, to stop spread rushing attacks without bringing extra players into the box. So who executes at the basic level in the trenches?

Mississippi State can’t beat Bama in a contest of sheer will. Stout linemen like 320-pound A’Shawn Robinson or 310-pound Jarran Reed excel at resetting the line and squeezing creases while powerful linebackers flow to the ball. There’s also strong safety Landon Collins, who’s quick to the scene and is the Tide's second-leading tackler.

The Bulldogs’ answer is their base concept, power-read (diagrammed above), which gets Robinson to the edge and Prescott between the tackles. Even on man-blocking concepts like power-read, the Bulldog OL make blocks based on rules rather than assignments. They make contact to ensure the DL are in particular spots, then climb to take on new defenders. They trust Robinson and Prescott to make decisive cuts through the mess they leave behind. The effect is forcing DL to think on their feet and DBs to beat blocks they are unaccustomed to facing, since the DL usually keeps them clean.

If Prescott is involved early, and if his line can give him a clean picture in the trenches, MSU can be the team that finds something on the ground against the Tide.

The combination of quarterback Dak Prescott and running back Josh Robinson has made MSU's backfield one of the best in the country. Robinson gained at least 107 rushing yards in four of MSU's first seven games and averaged at least 5.1 yards per carry in all seven before Arkansas slowed him down.

Prescott, meanwhile, went for 355 yards in a three-game span against UAB, South Alabama, and LSU, then went for 121 in the win over Auburn. He was taking a lot of hits and has scaled back his carries (even including sacks, he's rushed just 37 times in the last three games), but one assumes he'll be willing to take 40 hits against Alabama if it moves the football.

Efficiency is the name of the game for MSU -- the Bulldogs are third in the country with a 51.9 percent success rate (Bama's defense is 10th at 33.7 percent) -- and things have worked beautifully for the Bulldogs most of the year.

But now they face Alabama, which has one of the best run defenses in the country and has a front seven that is far more active and disruptive than it was last season. Alabama had just 69 tackles for loss last season, 86th in the country; through nine games, the Tide are 60th in 2014. Led by Xzavier Dickson, Jonathan Allen, and leading tackler Reggie Ragland, the Alabama front seven ranks fourth in the country with an 11.1 percent Havoc Rate (plays with TFLs, forced fumbles, and passes defensed).

So we've got a bit of an irresistible-force-vs.-immovable-object matchup going on here. MSU has relied on the threat of the run to set up the pass and has fed defenses a steady dose of Prescott on passing downs. It has worked against almost everybody, but Alabama is a different animal than any defense MSU has faced.

Can Prescott's dual-threat ability crack open the Bama defense like it did to LSU and Auburn weeks ago? At the very least, can MSU keep from moving backwards too much and damaging its case in the field position battle?

Both teams vs. the forward pass

Philosophically, these offenses are closely related. The formations may be different, but both want to attempt balance on standard downs -- MSU is 55th with a 60.0 percent run rate, while Alabama is 56th at 59.8 percent -- and both learn on the run more than normal on passing downs, to protect their quarterbacks and to take advantage of their general mobility. MSU rushes 42.8 percent of the time on passing downs (17th), while Alabama does so 38 percent of the time (30th).

The similarities end when we start talking about the pass, however.

Through a combination of intent and necessity (top receiver Jameon Lewis has missed three games with injury), MSU's passing attack has been one of the most balanced in the country. Seven players have been targeted between 22 and 43 times, eight have caught at least 10 passes, and only two (sophomore De'Runnya Wilson and freshman possession man Gabe Myles) have caught 20 or more.

Prescott has leaned on Wilson on passing downs; the 6'5, 225-pound former basketball player has caught 10 of 19 passes for 157 yards and five touchdowns on such downs, and nobody else has been targeted more than 10 times. Lewis, however, is expected to be full speed (or close to it), which could be great news. He caught five passes for 116 yards against LSU before getting hurt, and he's caught only one ball for two yards in sporadic action since.

The shakiness of Alabama's pass defense is another thing that's been drastically overstated. The Tide rank 10th in Passing S&P+ and have only allowed a team to amass a passer rating better than a paltry 120 just twice this year. Texas A&M, Tennessee, and LSU combined to complete just 48 of 93 passes for 419 yards, three touchdowns, and three interceptions. Prescott is the best quarterback Bama has faced this year, and if he has two go-tos in Wilson and Lewis, to go along with the deep stable of potential options, MSU might have a chance to spread the Tide out and find some open holes.

Alabama, meanwhile, has the opposite of balance in the passing game.

This can be both good and bad. Offensive coordinator Lane Kiffin will get creative in the ways he puts the ball into the hands of play-makers -- you can't simply double Cooper and have that be the end of the discussion. But LSU's outstanding pass defense was able to push him around, mix up its coverages, and take Cooper out of the game quite a bit. In two second-quarter drives, Cooper caught four of six passes for 63 yards; the rest of the game, he caught four of 11 for 20 and dropped three passes.

Huge catches by Christion Jones and DeAndrew White on Alabama's last-second field goal drive bailed the Tide out and perhaps will serve as a sign of more balanced things to come for the Bama passing game.

Regardless, while both teams will run frequently, the team that comes through in the passing game will be more capable of either flipping the field or simply scoring points.

Key stat No. 6: Among the 90 FBS running backs with at least 110 carries, Bama's T.J. Yeldon and Derrick Henry rank 74th and 80th, respectively, in Highlight Yards per Opportunity, the second-level yards you gain when you get to the second level of the defense.

We like to joke about how Kiffin has given up on the run; it's something for which he built a reputation at times during his stint as USC's head coach. To be sure, he likes throwing the ball around, even if just horizontally.

Still, Alabama runs the ball a lot. And the Tide do it well, too. But if they want a big play, they have to take to the air. Yeldon and Henry are good at gaining five yards, but they don't gain 20 very often. That means longer drives, and that means eventually having to ask Blake Sims to make passes.

As we'll see below, MSU's defense is fantastic when it comes to shutting drives down once they move into MSU territory. You might need to score on MSU from further out. But if Alabama wants big plays, it might have to take to the air. We know Yeldon and especially Henry are capable of big gainers, but they haven't come this year, perhaps because a shaky line isn't holding its blocks as long.

Yeldon is expected to play after suffering a late-game ankle sprain last week. We'll see if he and Henry are able to do Sims some favors.

Both offenses vs. the goal line

Key stat No. 7: Alabama and Mississippi State rank second and third, respectively, in Points Per Scoring Opportunity margin. (A scoring opportunity is a drive that include a first down inside the opponent's 40.) Alabama averages 4.8 points per opportunity (36th) and allows just 2.9 points per trip (first). MSU averages 5.1 points (15th) and allows 3.3 (seventh).

Once you near the Bulldogs' end zone, you stop moving the ball.

This obviously isn't a bad trait. If you can't dominate every play, dominate the ones with points on the line. Auburn gained 441 yards but scored just 23 points, and Arkansas gained 401 but scored 10. Those two teams combined to create 12 scoring opportunities in 26 drives but averaged a paltry 2.8 points, less than a field goal per trip.

In those two games, MSU's defense did what Alabama's has done all year. You think it's hard to run the ball on Alabama from your own 40? Try doing it from Alabama's 10. The Tide don't give you many scoring opportunities, and they snuff out the ones you get.

This was a huge key for MSU-Auburn. Auburn had to that point been one of the best per-opportunity teams in the country, and MSU completely dominated near both end zones. If the Bulldogs do the same, either by finishing their own drives in the end zone or by forcing Bama to settle for field goals (which, as we know, can be an iffy proposition), they can make up ground if, as the numbers suggest, they end up at a bit of a disadvantage otherwise.