Excitement continues to build over the first ever FBS playoff, but don't forget about the little guys. Four teams? Try 24. The FCS playoff is an annual must-watch event, and the full bracket and schedule has arrived. This is just the second year with a 24-team field for the FCS. The eight seeded teams all get first-round byes.

Full bracket via the NCAA (all times ET): 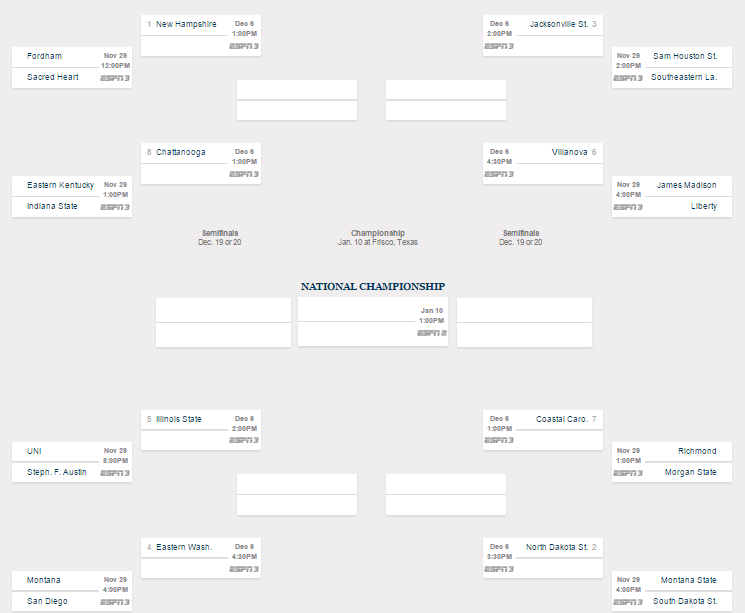 Top seed New Hampshire went undefeated in FCS play, with their lone loss coming in their season opener at Toledo. The Wildcats finished on top of Villanova in the CAA standings but did not play them in the regular season. A potential all-CAA final awaits if Villanova can make a Cinderella run. New Hampshire only played one playoff team this season, defeating conference rival Richmond 29-26 on the road.

Three-time reigning champs North Dakota State are in the field as a No. 2 seed, but will have to defend their title without head coach Craig Bohl (now at Wyoming). The Bison defeated Iowa State, 34-14 and boast victories over playoff teams Montana (22-10) and South Dakota State (37-17). They lost a regular-season FCS game this season, dropping a 23-3 decision to Northern Iowa, another playoff team.

Perennial contender Eastern Washington finds itself back in at No. 4. The Eagles nearly pulled off a mammoth upset against Washington, with their only other loss coming against Northern Arizona. They have one of the nation's most exciting players in quarterback Vernon Adams and beat playoff teams Montana, Montana State and Sam Houston State.