This week, the winners of TCU-Kansas State and Ohio State-Michigan State will put themselves in great position, both in terms of Playoff committee ranking and win probabilities.

This week provided us with a different kind of look at the College Football Playoff committee's leanings. Last week, the committee was reacting to nine weeks at once. This time, with only one week of games since the last polls, we got to find out how it would react on the fly.

Peter Berkes has already covered most of what we learned from Tuesday night's rankings. I will add one other thing:

We will only have a two-loss participant if there are no other options. Last Saturday, Ole Miss (No. 4 in the committee rankings) lost to No. 3 Auburn by the most excruciating margin and did so with help from a key injury. The Rebels fell seven spots and now rank ahead of only three one-loss teams. Two of those three (Baylor and Ohio State) will either a) become two-loss teams this weekend, or b) almost certainly move ahead of Ole Miss with big road wins this weekend.

If ever there were an occasion for the committee to avoid docking a one-loss team for becoming a two-loss team, it would have been following Ole Miss' loss. That didn't happen. So as we search for precedent each week for this unknown process, add "No two-loss teams" to the list. (This isn't necessarily a bad thing.)

Below are picks generated from the F/+ win probabilities I post weekly at Football Study Hall. They are above 50 percent against the spread. Teams given a 90-99 percent chance of winning are currently winning 95 percent of the time, teams at 80-89 percent are winning 84 percent of the time, 70-79 are at 78 percent, 60-69 are at 59 percent, and 50-59 are at 47 percent. The tossup games have been tossups, but F/+ has done a nice job of nailing the likely wins. (And yes, there are always exceptions.)

Oregon is just about in the clear, especially if the Ducks tread past this week's Salt Lake City minefield unscathed. TCU is mostly home free with a home win over Kansas State. Florida State might still lose a game -- Miami is a better team than most realize, and Florida might be at least one percent better than we thought -- but isn't going to lose two. And Mississippi State has a just-good-enough chance of going 1-1 against Alabama and Ole Miss.

With wins this weekend, however, up to eight teams could be members of the 10.5 Club: Mississippi State, Florida State, Oregon, TCU, and Duke, plus the Michigan State-Ohio State winner, Arizona State, and Baylor.

Mash together the teams that will still play each other in coming weeks (or might in a conference title game), and you get the following Playoff candidates: Mississippi State, Florida State/Duke, Oregon/Arizona State, TCU, Michigan State/Ohio State, and Baylor. As Peter mentioned, the odds of the SEC getting two teams into the field took a hit last weekend, and unless Auburn and Mississippi State both win out, it probably won't happen. (If MSU goes 1-1 against Alabama and Ole Miss, there might be a chance.) 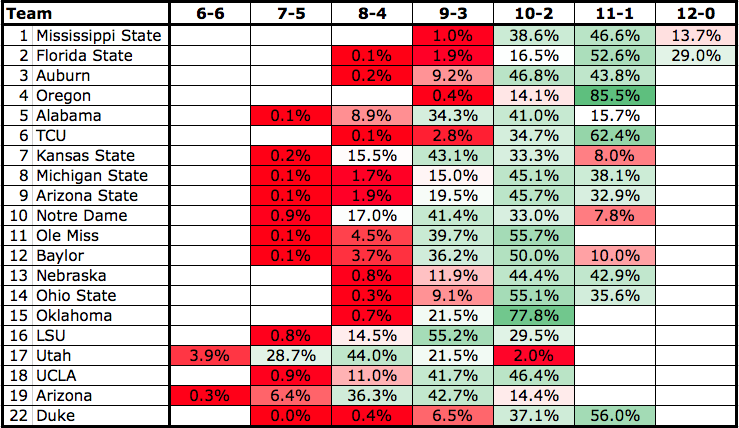 And here's the list of teams in order of their likelihood of reaching at least 11 wins in the regular season:

Though some games vary in size, every contender has some key games coming up. Some are looking at Week 11 cakewalks. 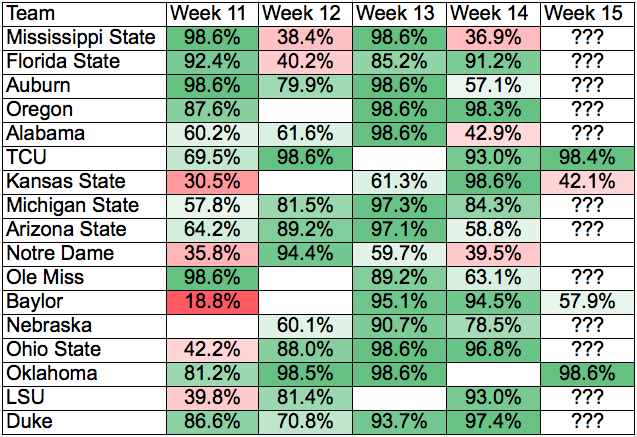 While Michigan State still has tricky road games against Maryland and Penn State, if Ohio State wins, the Buckeyes are mostly safe until a Big Ten title showdown against Nebraska or Wisconsin.

As you see, Nebraska's own chances of reaching 11-1 took a hit because of strong showings by Wisconsin (who will host the Huskers in Week 12) and Iowa (Week 14). But NU is still the West favorite, and the Huskers are a legitimate top-15 team.

If TCU handles Bill Snyder's Wildcats, the Horned Frogs are almost in the clear with remaining games against Kansas in Lawrence, Texas in Austin, and Iowa State in Fort Worth. There are more hurdles for KSU, namely trips to Morgantown and Waco.

Alabama's got work to do, even if the Tide emerge victorious in Baton Rouge. But at least Mississippi State and Auburn (and Western Carolina -- can't forget Western Carolina!) are in Tuscaloosa.

A Baylor win would give us another case study. The committee has been unimpressed with Baylor's schedule (despite the home win over TCU) but set an interesting standard by bumping Arizona State up a few spots this week. ASU beat Utah at home and moved from 14th to ninth; would a win at Oklahoma lead to a similar bump for the No. 12 Bears?

The magnitude of the bump could be important, because Baylor would have one more opportunity for a nice win when Kansas State visits on December 6. Not only is that a big game between two good teams, it could also determine whether Baylor wins the Big 12.

If the season ended today

Here's the best guess as to how the six big New Year's bowls would look. The top four in the rankings go to the Rose and Sugar semifinals, with No. 1 getting its closer site. Conference ties determine the Orange. The top non-power-conference team is guaranteed a spot. And the committee matches up the other three games according to geography and appeal.

No. 8 Michigan State vs. Marshall*

No. 1 Mississippi State vs. No. 4 Oregon

* The committee didn't rank a non-power team this week. Let's guess it would be undefeated Marshall.

Week 11 is a table-setter for those trying to position themselves behind our two remaining undefeated power teams, Mississippi State and Florida State.

Week 12, however, sends both of those teams on the road against strong opponents. MSU faces Alabama, while FSU goes against a Miami team that is up to 12th in the F/+ rankings. Those two games will suck up most of the week's oxygen.

There will still be conference title games to play. Let's walk through the probabilities for the most likely matchups.

With Georgia's rather inexplicable loss to Florida, suddenly Missouri has a solid chance of winning the SEC East. That opens up a few more possibilities here, none of them particularly good for the East champion:

Georgia isn't as bad as it looked against Florida, but the Dawgs would only provide slightly more resistance than a Missouri team with a great defense and a bad offense. Either way, the West champion is probably rolling.

Michigan State and Ohio State should be rooting for an 11-1 Nebraska, for strength of schedule. The problem with that is simple: Nebraska might beat the Spartans or Buckeyes. And it would be interesting to see how high the Huskers might get if they get to 12-1 with a road win over Wisconsin and a neutral-site win over MSU or OSU.

There is about a 14 percent chance that "12-1 ACC champion Duke" happens.

There are still plenty of tossup games to play and questions to answer, but in the meantime, your most likely scenario is something like this:

F/+ does think Miami has a strong shot of beating the Seminoles next week, and if FSU does fall, that opens up a scenario in which the committee has to choose between 12-1 FSU and 12-1 Michigan State/Ohio State. I figure the 'Noles still have a slight advantage there, but it's hard to tell.

Regardless, we're a week away from that speculation. In Week 11, Kansas State, TCU, Ohio State, Michigan State, Alabama, and Baylor are in the spotlight.