College football bowl season is here! The big question in each of Saturday's 5 games

From Cody Fajardo to Terrance Broadway to Rashard Higgins to Nate Orchard to Jarvion Franklin to Zach Vigil, there are plenty of names for you to know on the first day of bowl season.

Share All sharing options for: College football bowl season is here! The big question in each of Saturday's 5 games

The bowl season begins as an undercard should: with figures from lower weight classes tasting the glare of the spotlight. Only one power team (Utah) plays before next Friday, but there are great players and tight matchups to keep us entertained. You have reasons to watch the early bowls beyond "it's college football, and you'll be starving for it soon." 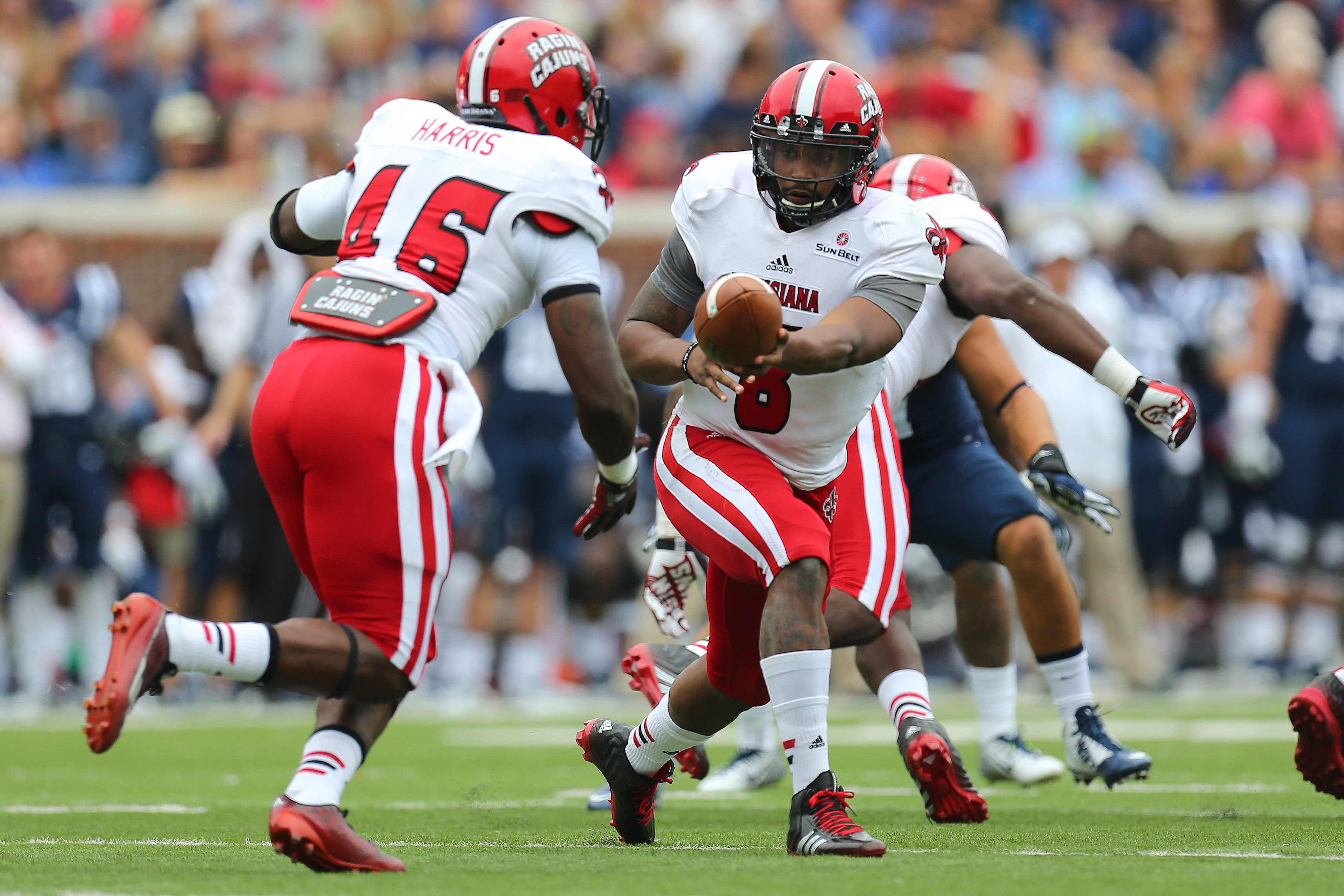 It is criminal to ask New Orleans to host a game with a 10 a.m. (Central Time) kickoff. New Orleans should always be the anchor leg of a busy day, and it's no wonder that for the first time in Louisiana-Lafayette's four-year run of New Orleans Bowls, the Cajuns haven't sold tickets at the same brisk rate.

Regardless, there are worse ways to open bowl season than by watching two exciting senior quarterbacks -- UL's Terrance Broadway and UNR's Cody Fajardo -- showdown against one another. The two have combined to pass for 4,400 yards and rush for nearly 1,900 (pre-sacks), and each can find success. Both the Cajuns (57th) and Wolf Pack (53rd) rank in the Off. F/+ top 60, and both defenses rank lower (Nevada 84th in Def. F/+, UL 111th).

Expect plenty of rushing. Both teams run the ball more than the national average, and with the personnel at hand, that makes sense. Broadway shares a backfield with big Alonzo Harris (6'1, 238 pounds, 737 rushing yards) and speedy Elijah McGuire (5'11, 198, 1,165 yards), while junior Don Jackson and freshman James Butler have combined to give Fajardo more than 1,500 rushing yards.

UL has been better against the run, but Nevada is more likely to make havoc plays and force passing downs. 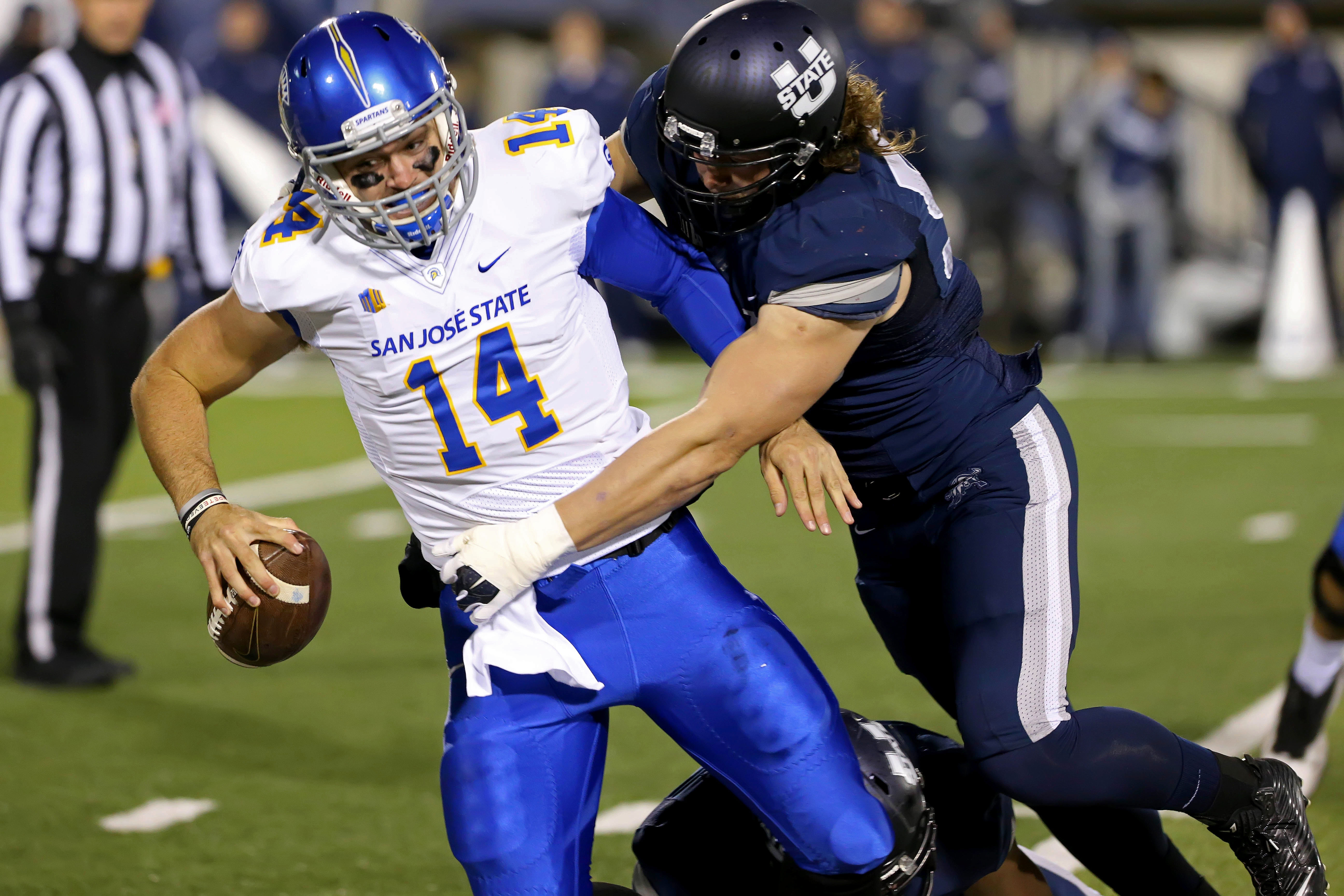 About 950 miles separate Logan and El Paso, which is a small hop for UTEP. But these two have played only twice, in 1960 and 1961. Utah State won by scores of 20-7 and 21-6, and damned if this doesn't look like it could finish with a similar margin.

"Utah State quarterback" has become an endangered species. Poor Chuckie Keeton suffered season-ending injuries in back-to-back years, and in his 2014 absence, Darell Garretson and Craig Harrison went down. That left freshman Kent Myers in charge by default, but he has fared well in six appearances. He managed a passer rating of 160-plus in of his first two starts and completed at least 60 percent in four of five; plus, he rushed for 92 yards in an easy win over San Jose State. But he wasn't asked to do a lot -- the primary role of Utah State's offense is to set the table for a defense that has again been one of the finest of the mid-major universe.

Utah State ranks 33rd in Def. F/+; UTEP ranks 99th in Off. F/+. That could be a problem for the Miners, huh? UTEP runs the ball almost as frequently as any non-flexbone team (12th in standard downs run rate, 10th on passing downs), and they're good at it: sophomore Aaron Jones and senior Nathan Jeffery (UTEP's "it seems like that guy's been there for 16 years" guy) have combined for 1,746 yards and 16 scores, and quarterback Jameill Showers (you remember him for being Texas A&M's presumptive starter before Johnny Manziel broke out) and No. 3 back Josh Bell have each gone for more than 240.

If UTEP can approximate the power success that Boise State had in a 50-19 win over USU on November 29, the Miners can control the ball, tilt the field, and position for an upset. If they have to pass, Zach Vigil and the Aggie defense will eat them alive. UTEP ranks 124th in Passing S&P+ and 122nd in Passing Downs S&P+. 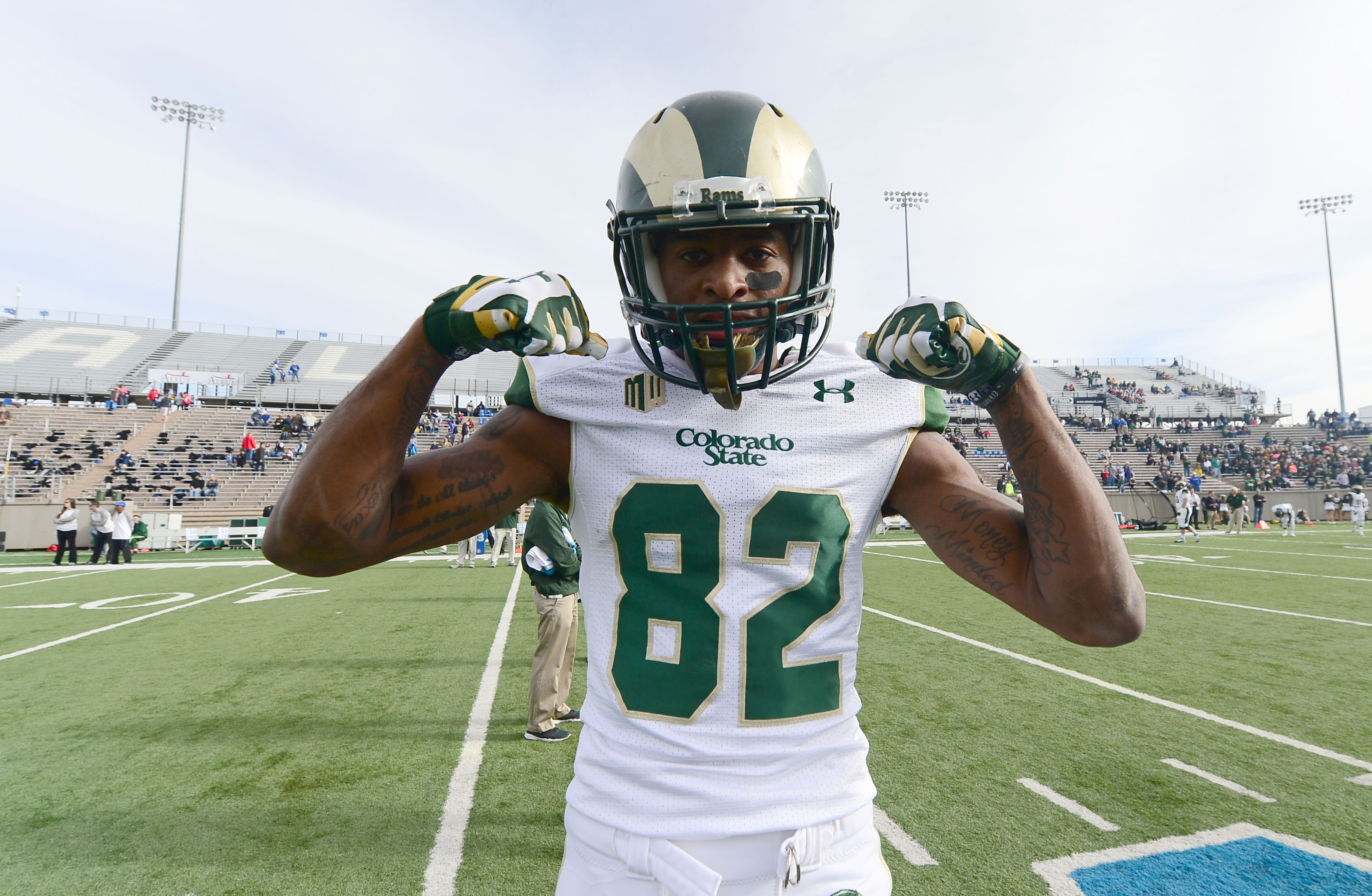 CSU falls into the latter. The Rams' reward for their first 10-win season since 2002 (and their first ever without former head coach Sonny Lubick) was losing Jim McElwain to Florida. Offensive coordinator Dave Baldwin is CSU's interim head coach, and one never knows what kind of effect that might have. Sometimes it's a rallying force. Sometimes it's a splinter.

If Colorado State plays at the level it maintained for most of 2014, the Rams could reach 11 wins for the second time ever. (The first came in 1997.) The Rams have combined a top-60 defense (57th in Def. F/+) with a top-20 offense (19th in Off. F/+), and their pass-first attack created big plays galore. Sophomore wideout Rashard Higgins earned consensus All-American status after catching 89 balls for 1,640 yards and 17 touchdowns, and running back (and Alabama transfer) Dee Hart contributed 1,254 yards and 16 scores. Quarterback Garrett Grayson has been one of the nation's more efficient signal callers (65 percent completion rate, 32 touchdowns, six interceptions).

This is one of the best offenses Utah faces in 2014.

But if CSU is off because of the coaching change, if the Rams are a half-step slow, Utah's aggressive defense will unleash hell. The Utes reached 8-4 in a tough Pac-12 because of defense, special teams, and timely offense; almost no one in the country has a more fun defense to watch, one of only five FBS units to combine 100 tackles for loss with 60 passes defensed. (The others: Ohio State, TCU, Louisiana Tech, and Utah State.) All-American punter Tom Hackett pins you deep, ends Nate Orchard and Hunter Dimick (combined: 34.5 tackles for loss) push you deeper, and eventually you give up some easy scores. 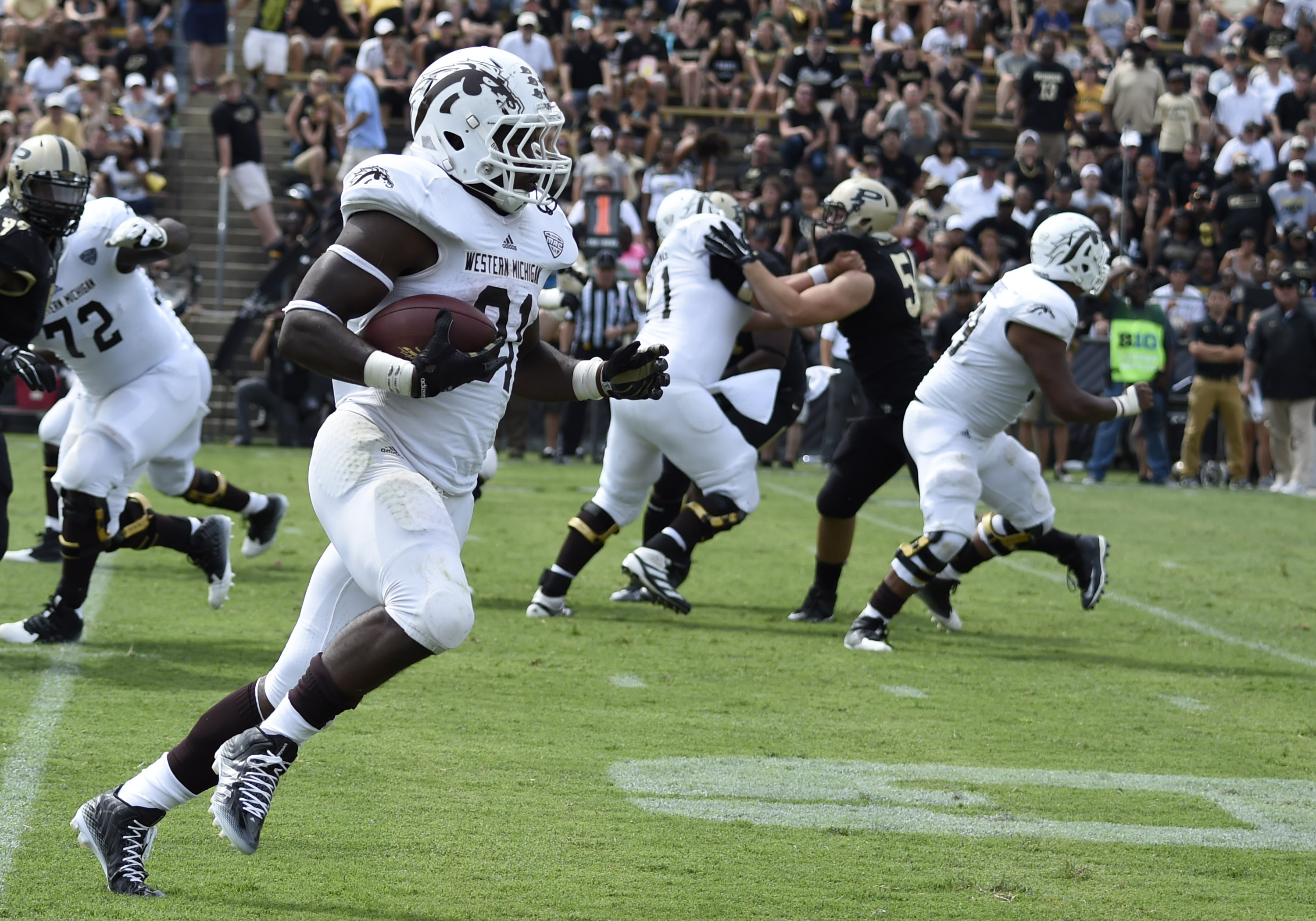 In 2013, Western Michigan and Air Force combined to go 3-21. The start of WMU head coach P.J. Fleck's tenure could not have been bumpier, and it looked like the end of Air Force coach Troy Calhoun's tenure.

But a youth movement in Kalamazoo did exactly what it isn't expected to do: spark a quick turnaround. Air Force underwent an unexpected defensive renaissance, improving from 122nd in Def. F/+ to 32nd while changing minimal personnel. Air Force beat Boise State and Colorado State. WMU whipped MAC East champ Bowling Green on the road and nearly won the MAC West before fading against Northern Illinois.

The result of each team's drastic improvement: a combined 17-7 record.

Turnarounds are great stories, but they sometimes result in bowl-game duds. When you spend a couple of weeks being congratulated, and a lot of key players are seeing their first bowl experiences*, sometimes you lay an egg.

* It should be noted that neither of these schools have had major bowl droughts. WMU was bowling in 2011, Air Force in 2012. But WMU is leaning on a set of players that wasn't around in 2011.

On paper, this is one of the most even matchups of bowl season. Air Force ranks 44th overall in the F/+ ratings, powered by defense (32nd) and special teams (13th). WMU comes in at 47th (46th on offense). WMU attempts balance but skews run-heavy and creates big plays; Air Force defends the run well (eighth in Rushing S&P+) and is willing to give you a couple of big plays in the name of suffocating you.

The key player could be WMU running back Jarvion Franklin. The 220-pound freshman from Tinley Park, Ill., wasn't one of the most touted members of WMU's historically great (by MAC standards) 2014 recruiting class, but he was still a three-star guy, and he had as much impact on his team as any freshman in the country.

Franklin also faded late. He took on 294 carries in 12 games, and in a four-game stretch that set the table for a run at the division title, Franklin gained 648 yards and scored seven times. But the grind took its toll: he gained 195 yards on 52 carries (3.8 per carry) over the final three games. If three weeks of rest gives him some extra kick, and if WMU is able to carve out some lanes, the Broncos could finish 2014 with their first bowl win. (They're 0-4.) But those are significant "ifs" against this Air Force front.

5. Will there be any points in Montgomery? 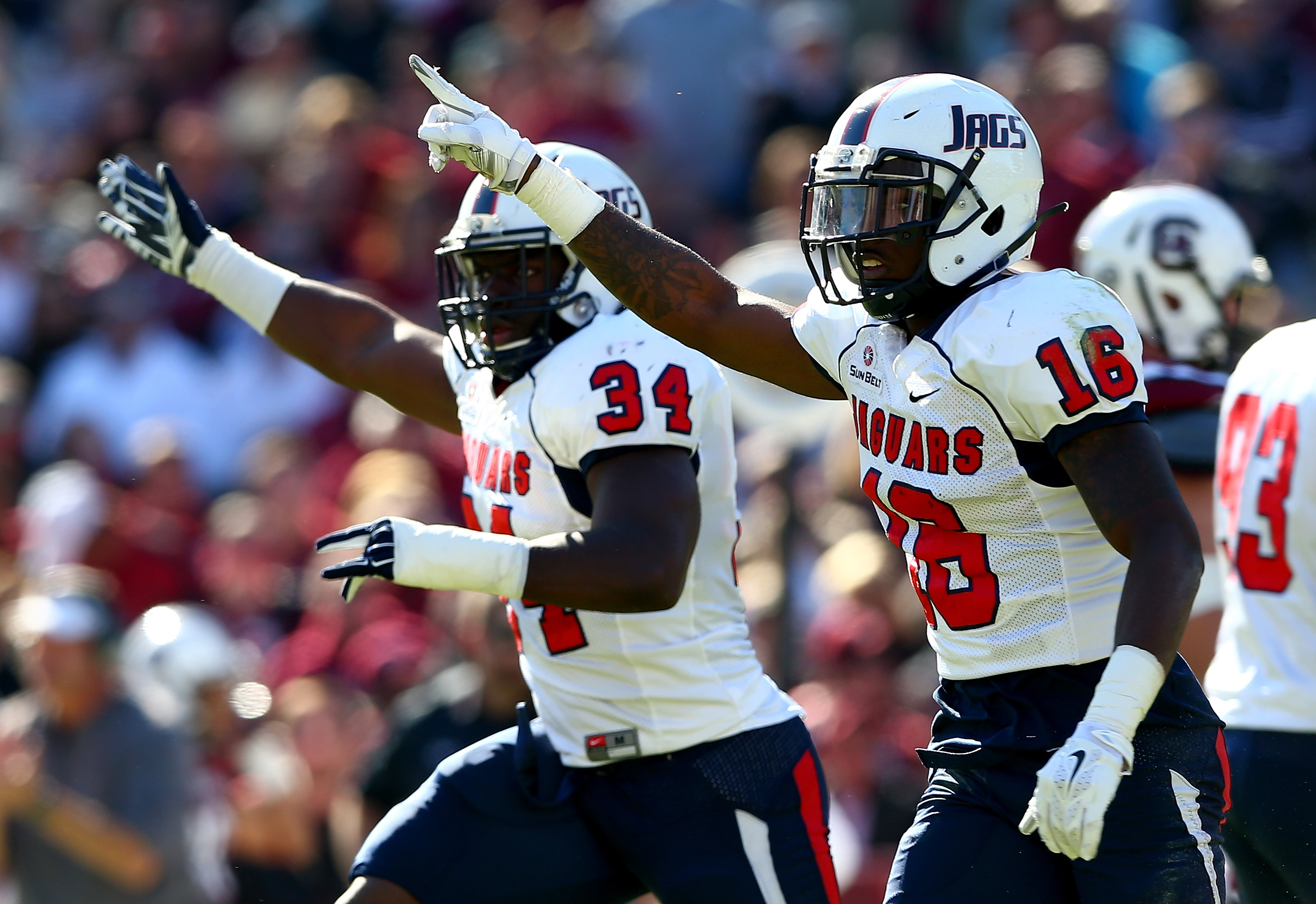 South Alabama isn't traveling far to attend its first bowl. And on a day full of strong mid-major defenses, the Jaguars are making the two-and-a-half-hour trip to Montgomery with a D that ranks 53rd in Def. F/+. USA has play-makers at every level of the defense, from defensive end Jimmie Gipson (five tackles for loss, seven QB hurries) to JACK backer Theo Rich (12 tackles for loss, eight sacks) to do-everything corner Montell Garner (4.5 tackles for loss, 10 passes defensed). For a BGSU offense that has averaged better than 5.4 yards per play once in its last seven games, that could be a problem.

The issue for South Alabama: as good as the defense is, the "best defense on the field" mantel often goes to whoever gets to face the USA offense. The Jags are 124th in Off. F/+, and while the offense had its moments -- 40 points against Navy, 7.9 yards per play against Appalachian State (before Appalachian State turned into a strong team) -- it held them back. Only once in six losses did the Jags score more than 12. BGSU's defense is nothing to write home about (110th in Def. F/+), but it still might hold advantages.

How dire has the USA offense been? The fix has begun immediately. UAB offensive coordinator Bryant Vincent, who played a role in the Blazers' drastic 2014 improvement, suddenly found himself without a job when the UAB program dissolved. USA head coach Joey Jones not only brought him aboard as next year's O.C., he handed Vincent the reins for the bowl game. (If you're looking for who might benefit from UAB's absence, look no further than a USAzers team that has already brought on five offensive players from Birmingham.) Vincent did some nice things with tempo at UAB this year, but you have to get first downs to establish tempo. Otherwise you just to three-and-out really quickly.

That was a bit of a problem for BGSU and head coach Dino Babers in his first year as well.