In Georgia Southern's final game as an FCS team, the Eagles took down Florida. That was a grand statement, but with a new head coach, changes to the offense, and a lack of size on the lines, are the Eagles ready to compete consistently at the FBS level?

1. What a way to make an entrance

When Skyler Mornhinweg found Solomon Patton for a 46-yard touchdown with 5:41 remaining, we assumed we knew how the game would end. Georgia Southern, battered and bruised with barely enough healthy bodies for a two-deep, had scored 20 straight points to take a 20-10 lead over Florida in front of 82,459 (approximate, ahem) in The Swamp, but Patton's touchdown tied the game. Florida had stuffed fullback William Banks on fourth-and-two a few plays earlier, and after getting gashed by the Eagles' option attack, the tide had turned.

Not so much. On third-and-two from the GS 33, Banks rumbled over left guard for 53 yards. Two plays later, quarterback Jerick McKinnon went right for a 14-yard score. Despite the second missed PAT of the game, Southern led, 26-20, with 2:57 left.

It took a little while, but Florida did begin to respond. Mornhinweg found Quinton Dunbar for a pair of strikes, and Florida got to the Eagles' 17 with just 14 seconds remaining. But free safety Matt Dobson broke up a third-and-three pass to Dunbar. And then a fourth-down pass to Patton struck instead a rather seldom-used cornerback, Valdon Cooper. Ballgame.

In Georgia Southern's final game as an FCS team, the Eagles beat one of the proudest, most consistently strong programs at the FBS level, and they had done so by playing their game. Passes? Who needs 'em? McKinnon went zero-for-three; instead, GS won with a relentless option game that racked up 429 yards.

Granted, Florida stunk in November. Granted, Mornhinweg was the third-string quarterback getting protected ("protected") by a patchwork offensive line. Granted, the Gators' defense was a bit of a M*A*S*H unit as well. This wasn't exactly Appalachian State beating Michigan in 2007. But in terms of "we're ready" statements, that's a pretty good one.

2. A lot of transition

Granted, there are still a lot of moving pieces to the move to FBS.

But the Eagles lost head coach Jeff Monken to Army, replacing him with a head coach (Willie Fritz) who is both successful and implementing some changes. Georgia Southern will be learning a relatively new offense and replacing its best playmaker at both linebacker (Kyle Oehlbeck) and cornerback (Lavelle Westbrooks). The new pieces, on both the staff and the two-deep, are exciting, but growth could be slow in 2014.

Nobody knows the power and randomness of coaching hires any better than Georgia Southern, which has alternated between great (Erk Russell, Paul Johnson, and Monken combined to win five FCS national titles and reach the FCS semis an additional five times) and less so (Frank Ellwood, Brian VanGorder, and Chris Hatcher went 25-30 in a combined five seasons).

The option has been kind to GS through the years, but Fritz represents at least a bit of a departure. He's going to run and run, but he's also going to install some more modern, spread-esque wrinkles into the offense, and it might take a little while for everything to click.

Regardless, GS has proven all it's going to prove in three decades at the FCS level. The Eagles were second-division royalty, and now it's time to find out how they well they can maneuver around in the first division. Hell, if Georgia State's going to give it a shot, the secondary Georgia school that has actually accomplished something might as well, too...

Of the 10 Georgia Southern players with at least 10 carries in 2013, four played in all 11 games, and two played in three or fewer. Ten offensive linemen started at least one game. Of the 10 defensive backs with at least 15.0 tackles, four played in all 11 games. Georgia Southern was not only wrecked by injuries in 2013 (19 scholarship players were hurt when the Eagles made the trip to Gainesville), but they were wrecked in specific units. This was one of the major causes for the Eagles' slip to 7-4 last fall after three straight 10-win seasons and FCS playoff semifinal appearances.

But as we always say, injuries help quite a bit in the future tense. After a couple of years of bad injury luck up front, the offensive line returns 92 career starts (it isn't particularly big, and it will be learning a rather new system, but it's seasoned), and the defense returns four of its top six on the defensive line and eight of 10 in the secondary. There are pieces to work with here, especially considering the recruiting class Fritz just signed.

No, these are not heavyweights in the recruiting world, but recruiting rankings can matter even at the mid-major level, and with 10 three-star recruits (according to the 247Sports Composite system, which is more liberal with the three-stars than Rivals alone), Georgia Southern came out ahead of its new Sun Belt rivals. (Rivals class data didn't include the FBS newbies, which is why it's not included here.) 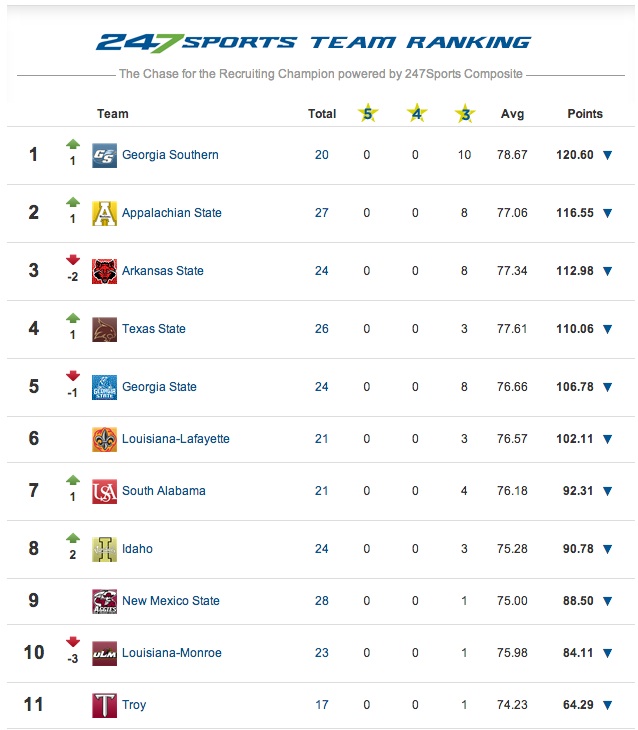 As a whole, the class is a mix of potentially immediate-impact talent from junior colleges -- running back Derek Keaton, linebackers Laderrick Roberts and Ken Butler, and three defensive backs -- and some intriguing two-star high school talent in the trenches. There could still be depth issues, especially at linebacker, but this team was already relatively young and interesting without the JUCO infusion. And considering Fritz was essentially tasked with keeping this class patched together after his predecessor left, this could say strong things about his ability to compete with his recruiting peers moving forward.

Fritz made a nearly immediate impact when he took the Sam Houston job in 2010. SHS improved just one game (from 5-6 to 6-5) in his first season, but the offense gained traction in 2011, averaging more than 400 yards per game; it averaged more than 450 in each of the next two years.

The Sam Houston offense was a mix of familiar and funky, with the quarterback playing a major role in the run game and the Bearkats running the ball nearly twice as much as they threw. For some examples of what they do, check out some of the highlights from their 2013 playoff loss to Southeastern Louisiana here. You see a lot of motion, a lot of pistol sets, a lot of unbalanced formations, and an Auburn-esque take on option football. It's fun, in other words. But it's not the flexbone, and we'll see if there's a learning curve for Ellison or whoever ends up winning the quarterback job. There are certainly quite a few options in the sophomore class (including wonderfully-named former FIU commit Vegas Harley) if Ellison isn't up to speed.

The other question comes up front. Georgia Southern's line was rather effective (at a Southern Conference level) in 2013, but it was built for the flexbone and is undersized compared to what Fritz eventually wants ("6'3 or taller and 300 pounds").

6. Passing without the element of surprise

Fritz's playbook will also include more standard passing -- packaged quick-pass options, spread formations, etc. We have absolutely no idea how Georgia Southern's receiving corps will stack up in that regard; that the Eagles return their top four wideouts (basically every single one who caught more than three passes) can't be a bad thing, but when your leading returning receiver caught 12 passes last year, that's not necessarily a good thing either.

There is no shortage of receiving talent in the general Georgia area, and Fritz should be able to attract plenty of interesting wideouts to his program, but we'll see how many he actually has on his team in 2014.

Fritz has said that he wants to move toward a 4-2-5 alignment with his defense, but he did retain defensive coordinator Jack Curtis. Between Curtis' return and that of most of GS' linemen and defensive backs, the transition on defense should be relatively smooth.

A 4-2-5 certainly makes sense from a pure numbers standpoint -- GS returns loads of defensive backs and few linebackers. But the four-man line could be the most important piece of the puzzle. The Eagles just didn't accomplish much from a pass-rush perspective in 2013; they brought down the quarterback just 12 times in 321 attempts (a 3.7 percent sack rate), and only one player, tackle Johnathan Battle, logged more than two sacks.

Granted, those responsible for 75 percent of last year's sacks return, including Army veteran Lennie Richardson, who did manage a couple of sacks in just seven games. But there are some pretty good passing games in the Sun Belt, and even with a well-seasoned secondary, one sack per game probably isn't going to cut it.

9. Options in the secondary

Granted, the top two cornerbacks are gone. Lavelle Westbrooks and Darius Safford combined to defense 13 passes last year, and their aggressiveness helped Georgia Southern limit opponents to just a 54 percent completion rate despite the iffy pass rush. And granted, opponents averaged a pretty healthy 13.2 yards per completion, which suggests that either their aggression didn't pay off or the safety help was generally lacking at times.

Still, the safety two-deep is going to be loaded with players who contributed quite a bit in last year's injury-fest, and in Darrius White, Caleb Williams, and Aaron Shaw, Fritz signed three JUCO corners to help fill a void. If one of those three is ready to start immediately, the rest of the depth chart should take shape nicely. If the line can hold up, against both run blocking and pass protection, the secondary shouldn't be much of a concern.

There are certainly reasons to be concerned about Georgia Southern's move to FBS in the short-term. Injuries or no, the Eagles are indeed coming off of their least successful season in a while. Their lines are undersized, and the offensive system is undergoing enough of a change that there could be some growing pains.

Granted, the schedule is built for a few wins, with home games against five teams projected 111th or worse and road games against what might have been the two worst teams in FBS last year. But whereas the Eagles were perhaps superior to most of their new conference mates as recently as 2012, that might not be the case in 2014. They're more likely to start around the lower middle of the conference instead of near the top.

Still, that's a pretty good place for an FBS newcomer to start, isn't it? This has been one of the most consistently successful FCS programs in the country, and it is located in the middle of one of college football's strongest bases of talent.

And in the Sun Belt Newbies hierarchy, I'd put the Eagles a few steps ahead of Georgia State and a couple ahead of Appalachian State. Granted, South Alabama has sprinted ahead of the pack, but long-term it's hard not to see GS getting along just fine against its new conference foes.