Let's revisit the idea that would make college football even more exciting, volatile, and potentially corrupt (just like world soccer!): promotion and relegation.

Share All sharing options for: College football relegation revisited: Updating the simulation to 2014

A couple summers ago, the SB Nation college football team played the "What if" game and introduced the concept of promotion and relegation to the college football universe. It was one of the most fun, entertaining, hopeless experiments I've been a part of, and since I mentioned it in Monday's Appalachian State season preview, I thought it would also be interesting to revisit it.

Relegation already happens in college football; it's just done in a stupid, messy and disorganized fashion. The process of relegation in college football is what you now know as "conference realignment," a shadowy process managed by boring men in blazers eyeballing spreadsheets of television homes in closed board rooms.

In order to bump up to a better league, you have to win and present a nice business opportunity for the league in question, and then after that you're in for life no matter how badly it goes. (You're welcome, Duke and Vanderbilt.) [...]

Since that welfare gap is on the way, let's go ahead and embrace it. Conferences need not go anywhere, but instead would have have affiliated subconferences. The Big Ten contracts out to the MAC for their second division, while the Pac-12 turns the Mountain West into theirs. The Big 12 grabs Conference-USA, while the SEC turns the Sun Belt into their kickass redneck rec room. The ACC turns the Big East into theirs, and if that sounds like an insult to the Big East, you really should take a long hard look at the Big East's current membership.

Here's SB Nation soccer editor Kevin McCauley on how the system works around the world.

And here's my eight-year (2005-12) simulation of how the process would work. We set up four tiers in the FBS and FCS conferences (and all the way down to Division III and NAIA, in the non-simulated version), then I played everything out based on a combination of real results and Sagarin simulations. And heading into the 2012 season, we were left with the following top-tier conference rosters, with non-original teams italicized:

Now, conference realignment obviously throws a strange kink into this scenario. Can Missouri and Texas A&M actually leave the Big 12 for the SEC with relegation in place? Can the Pac-10 turn into the Pac-12, and if so, how? Do they just add some of their old teams that have been previously demoted? And ... does the WAC still exist?

We decided to let teams shift laterally from column to column, so in our alternate reality 2011, Nebraska still left the first-tier Big 12 for the first-tier Big Ten, with the other big moves following. But a lot of real-life realignment moves were self-contained within single columns -- Pitt and Syracuse don't get to jump from the second-tier Big East to the first-tier ACC just because. They have to earn promotion. As for the WAC, it never dies in our scenario, since it's needed in the Pac-12's column to bridge the Mountain West with the Big Sky.

So, as an addendum to that series, let's check out how the last couple of seasons would have played out. 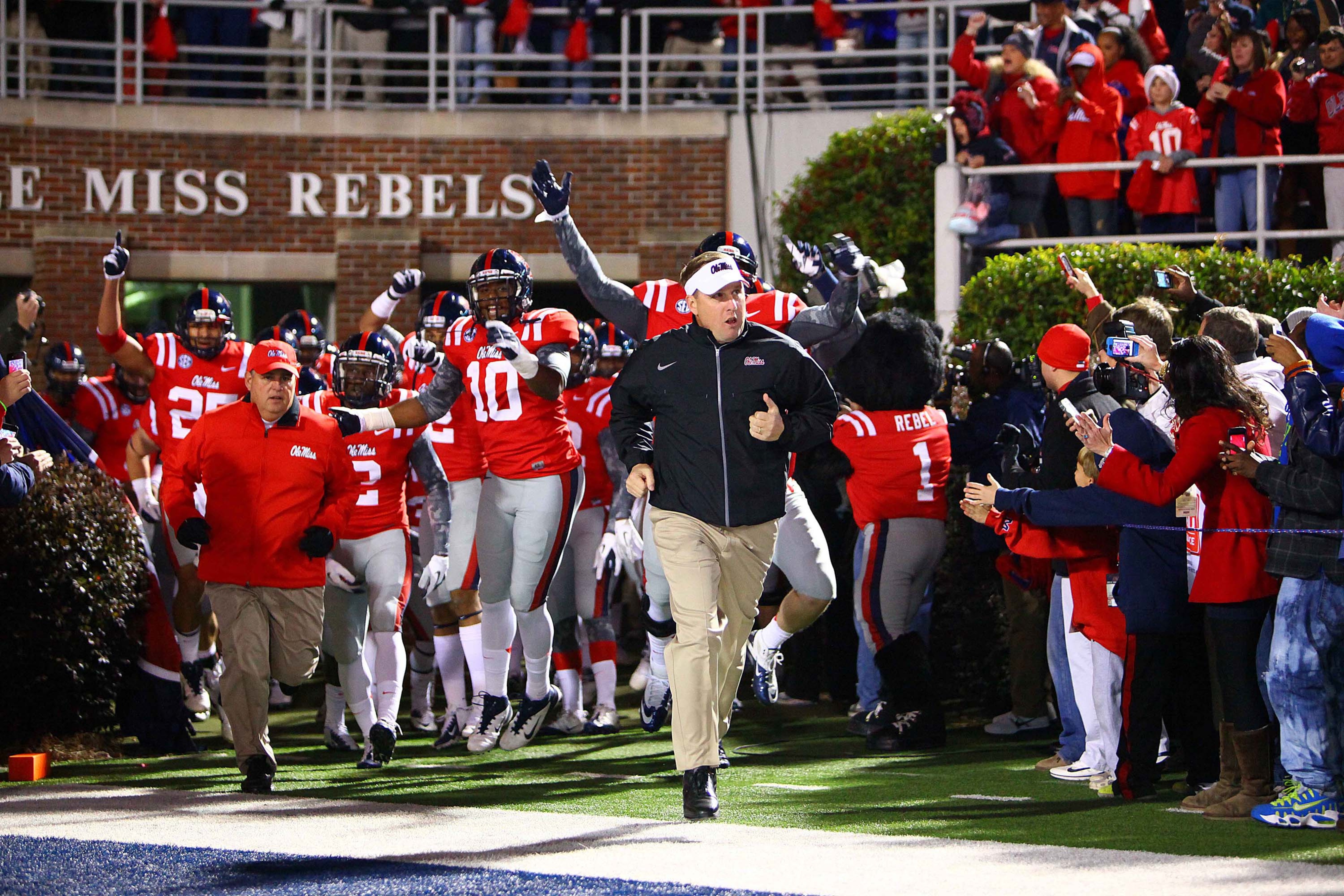 A real-life SEC bag man explains the 10 rules for paying college football recruits without getting caught.

So instead of engineering a Belk Bowl bid, David Cutcliffe's first huge accomplishment at Duke is winning the Colonial and getting promoted back to the Big East.

Meanwhile, North Dakota State gets a ticket to major-conference football, Southern Miss' sudden collapse has devastating consequences, Northeastern schools have a horrible year, and after Hugh Freeze's stirring Sun Belt title run, Ole Miss is back in the SEC, which has its original membership again. 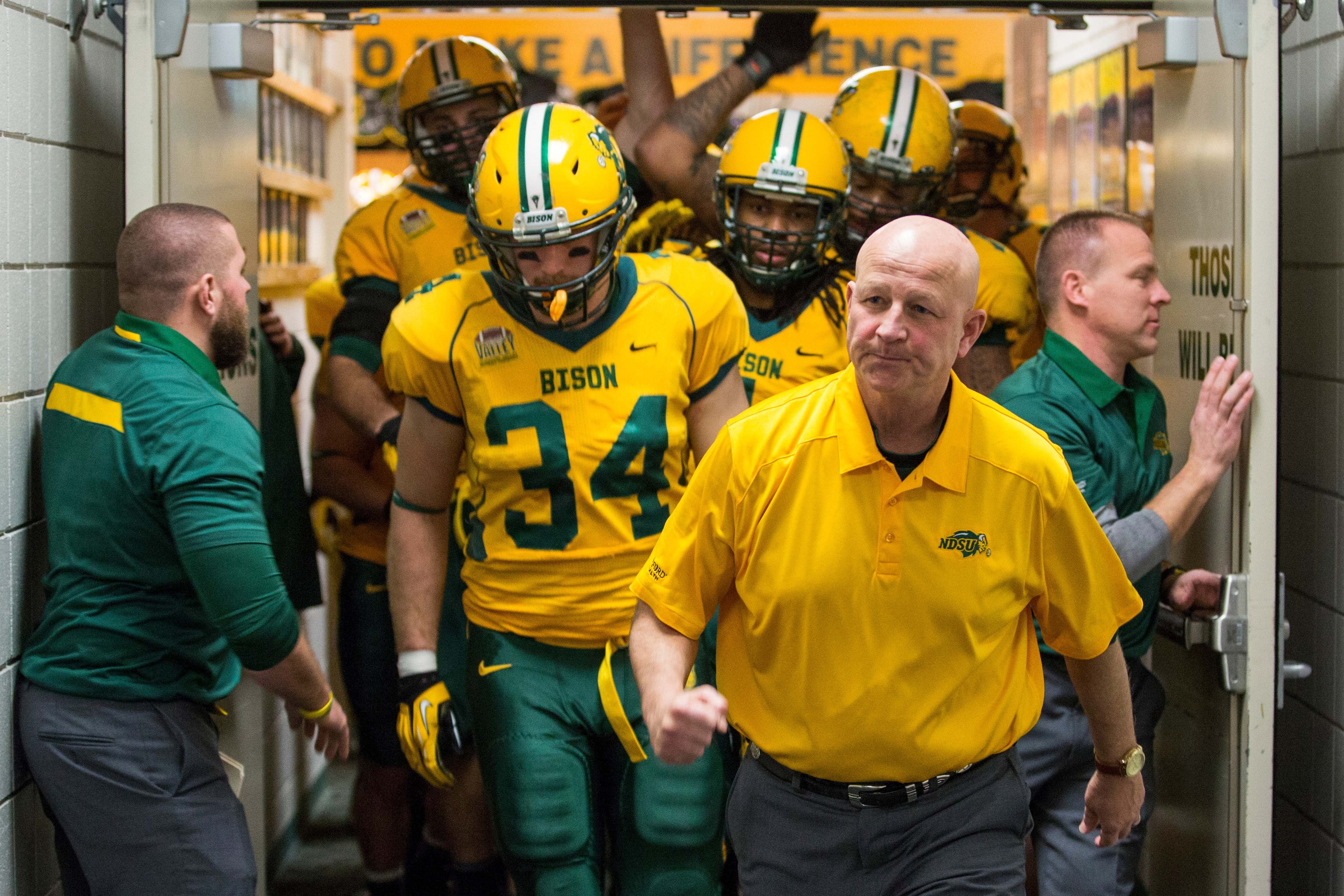 David Cutcliffe wins Coach of the Decade for simply bringing Duke back to the ACC, North Dakota State narrowly misses out on a Rose Bowl bid (the Bison would have finished around third in the Big Ten and wouldn't have lost head coach Craig Bohl to Wyoming), Nevada somehow survives another year in the Pac-12, and Mark Stoops' stud recruiting class at Kentucky falls apart when the Wildcats are demoted in favor of Mark Hudspeth's Ragin Cajuns.

Houston is in the Big 12, Bowling Green joins NDSU, NIU, and Toledo in the Big Ten, and Maine and SMU are now conference mates. So are West Virginia and UTEP. 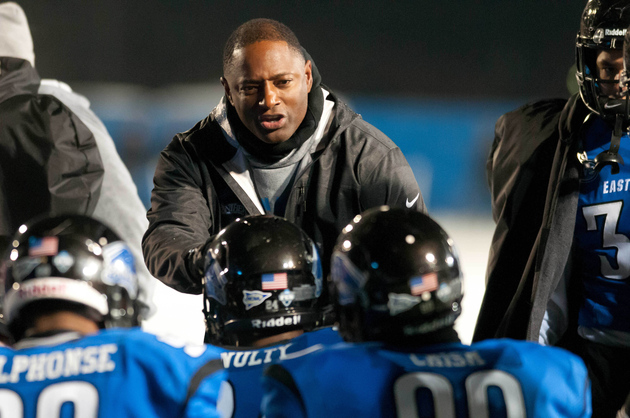 This is Dino Babers. He's Bowling Green's new head coach. He'd be running Art Briles' offense in the Big Ten, if we were in charge. (Bradley Leeb, USA Today)

So here's how the membership would shake out in 2014.

Cincinnati is saved! The Bearcats aren't doomed to second-tier life by realignment!

At this point, many conferences have awkward numbers. The ACC is at 13 teams, and there's probably not anyone else who'd want to jump over from another Tier 1 conference. Let's say it wants to expand to 14 and decides to start testing the rules. Should top conferences be able to give out one-time-only "get out of Tier 2 free" cards to original members (Boston College, NC State, Wake Forest) that got demoted? Could they be required to only add teams that they didn't already demote?

The latter is unrealistic (then again, anything could be made realistic in this entirely unrealistic alternate universe), and the former would open the door for some serious behind-the-scenes shenanigans. "You were demoted, [Original Member]? Don't worry. We'll just add you back anyway." So we'll leave the rules how they are, but know that college football will always follow the rules creatively.

Obviously realignment could still have shaken the rosters of C-USA and the Big East up quite a bit, and since they're on the same tier, there's nothing saying that SMU et al would have actually left C-USA for Big East territory. (The same goes for North Texas, MTSU, etc., obviously.) But in the end, there's something poetic and merit-based about Kansas sharing a conference with Cal Poly and Central Arkansas.

Yes, Southern Miss was just Robert Griffin III away from reaching the Big 12 in 2011 and is now in Tier 4.

Get ready for the 2014 season with our 128-team preview countdown.

The Big Ten-MAC pairing actually works out as well as any pairing in this experiment. Teams like Indiana, Illinois, Minnesota, and Purdue have played like MAC teams for most of the last half-decade (or longer), while programs like Northern Illinois, Toledo, and, yes, North Dakota State, have played at a higher level than the lowest Big Ten team for quite a while now.

Just like MAC teams have been able to jump up and compete in the Big Ten, Missouri Valley champs have been able to do the same in the MAC. The result: the MAC becomes a Hub Conference, with only five of 13(ish) original members occupying the roster in 2014.

Do Maryland and Rutgers still slide from the ACC's column to the Big Ten's? They made the move in real life because of money, and the Big Ten would still have more money to offer in this scenario. Joining the big MAC herd would decrease their chances of reaching the top tier, though.

This is another perfect example of how promotion and relegation would have made top-tier conferences better. Siphoning off the Washington States of the late-2000s for Boise State would have made this conference brutally tough. Meanwhile, the constant shifts in the MWC-WAC-Big Sky pairing is a perfect illustration of how close in quality so many Western teams really are.

While the Sun Belt is far separated from the SEC, Southern Conference champs have been reasonably well-suited for competing in Tier 2.

The takeaway from this experiment: Promotion and relegation would bring an extra layer of drama and excitement to a sport already full of it. You want conference battles to matter more? You want directionless legacy programs to be punished for playing awful football for years on end? You want better, more deserving programs to fill the spots of the legacies? You want the top tier of college football to be nearly free of dead weight? Promotion and relegation are for you.

Of course, as the conference realignment discussion above would suggest, the general cronyism of this sport (and college athletics in general) would still figure out a way to flourish. Those with money and connections would figure out small ways to rig the system. Plus, if you think coaches changing jobs (voluntarily and involuntarily) and players transferring are issues now? Just wait and see what would happen if teams change tiers from year to year.

But after two more years of this experiment, I'm no less sure that a) this would be an incredible thing for college football, in terms of excitement, competitiveness, drama, etc., and b) it would never, ever, ever, ever happen. It would reward currently powerless entities, and it would give entrenched, struggling programs no reason to say yes. But it's February; it's the time in the offseason where we can all do a little dreaming.