Texas State's defense was a major liability in 2012. The Bobcats improved dramatically on that side of the ball last fall but regressed on offense. Is this the year both units move forward at the same time?

Taking over a rebuilding (or simply building) project, you know a few things in advance. You know you're probably inheriting a bad team. Perhaps that means a total lack of talent across the board, or maybe you're lucky and it only means one of two units stinks. Maybe your recruiting base is limited. Maybe fan or administration support is tepid.

Dennis Franchione had to know what he was getting into when he took the TXST job in 2011. First of all, the Bobcats' history suggests how difficult it is to build and sustain success in San Marcos. Second, Franchione's been around the block. He built either major winners or turnaround successes at Pittsburg State, New Mexico, TCU, and (ever-so-briefly) Alabama. He even steadied the ship at Texas State for a couple of years two decades ago. He knows how to rebuild, and he knows how many things have to go right for you to both improve and stay improved.

In 2012, Texas State began full-time FBS play and posted a higher level of quality than might have been expected. The Bobcats went just 4-8 but ranked 99th in the F/+ rankings, ahead of BCS-conference teams like Kansas, Auburn, Wake Forest, Illinois, Kentucky, and Colorado. They were also a few steps ahead of fellow FBS newbies UTSA (No. 116), South Alabama (No. 118), and UMass (No. 122). The offense was salty, but the defense was hopeless. With an improved D, TXST could have potentially expected to quickly move into the upper half of the Sun Belt hierarchy.

The defense indeed improved in 2013. The Bobcats stiffened up against the run, swarmed to the ball, and improved all the way to 82nd. The offense, meanwhile, suffered from injuries and youth at quarterback, forgot how to pass, and sank to 120th in Off. F/+. A better record in close games meant TXST improved to 6-6 overall, but the Bobcats sank to 107th, and a string of three consecutive blowout losses ended their season.

Building a successful program is like pushing sand up a hill. You address problem areas here, and you lose ground over there. You build depth in one unit, and you get wrecked by injuries in another.

2. Good in the middle

TXST got off to a relatively fast start in 2013, in part because the schedule allowed it. The Bobcats reached 6-3 with a run of solid performances, but an injury to freshman quarterback Tyler Jones spelled doom late in the year. 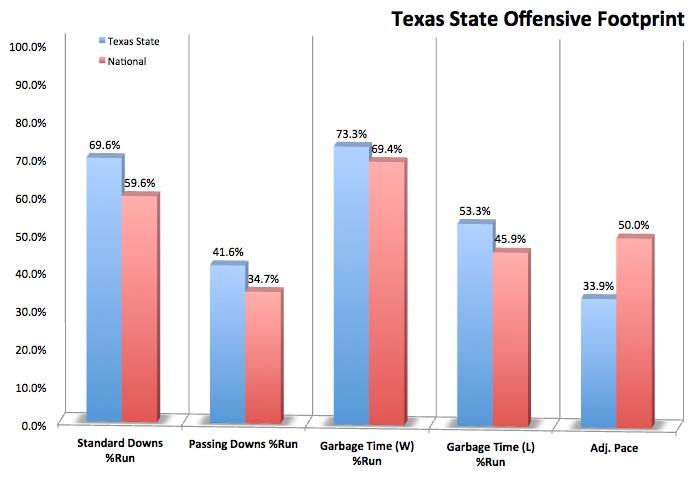 3. Play to your strengths ... or away from your weaknesses

In 2012, with quarterback Shaun Rutherford and running back Marcus Curry leading the way, TXST put together a top-50 running game. The Bobcats attempted to pass frequently on standard downs to keep defenses from focusing on the run, and it tended to work for a while before puttering out.

In 2013, both the names and identity changed. Quarterback Tyler Jones was a decent runner, and a trio of running backs (Robert Lowe, Chris Nutall, and Terrence Franks) proved worthy of a lot of carries, but instead of attempting to back defenses up with early-down passing, TXST just went run-first, run-second instead.

This was done in part because rushing was a strength, and in part because passing was a major weakness. Jones could complete passes, but they didn't really go anywhere, and when he was out, backups Tyler Arndt and Duke DeLancellotti were more or less disasters, completing 48 percent of their passes with a four-percent interception rate.

When you put your offense in the hands of a freshman, you know what you're getting yourself into; TXST accepted growing pains right from the start. Still, the passing game went from liability to disaster, and any gains for the running game rather quickly dried up.

4. The running game could thrive with just a little help

Lowe, Nutall, and Franks combined for 24 carries and 135 yards per game; all three return, as do most of the pieces from last year's OL two-deep. The line has seven players with starting experience and 88 career starts. Combine that with the healthy return of Tyler Jones (and the signing of Tyler JUCO QB Randy Price for competition), and you've got the makings of a healthy backfield and stellar running game ... as long as the passing game is able to something. Anything.

Losing your top two receivers is never a particularly good thing, but when the two combined to average 6.0 yards per target, one can probably assume you're not going to miss them too terribly much. Jones was able to complete short passes to Isaiah Battle and Andy Erickson relatively frequently, but the payoff was both minimal and replicable.

And with every other receiver returning and two three-star redshirt freshmen entering the mix, it's not hard to assume this unit improves a decent amount. Now the quarterback position has to as well. 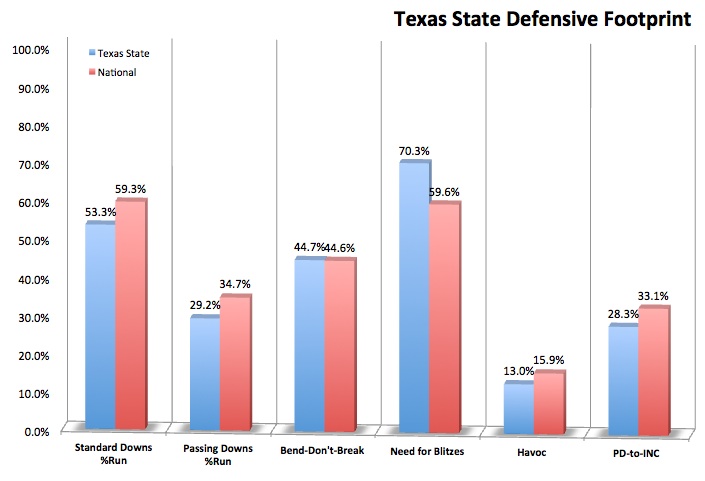 Texas State's ability to avoid breakdowns improved dramatically in 2013. The Bobcats were a top-50 team when it came to preventing big plays, and a lot of that was because of safety play in the passing game. The three experienced safeties in Craig Haivar's 4-2-5 alignment brought both play-making and play-preventing potential to the table; Aaron Matthews, Colby Targun, and Justin Iwuji combined for eight tackles for loss and 14 passes defensed to go with their part of TXST's drastic overall defensive improvement.

Still, opponents did choose to pass rather frequently against the Bobcats. Part of that has to do with the schedule at hand -- if you play in the Sun Belt, and you take on Texas Tech in non-conference, you're going to face a lot of passes -- but opponents passed far more than the national averages. As was the case in 2012, TXST still had no semblance of a pass rush, and the Bobcats' generally passive approach on standard downs still opened the door for a lot of eight-yard passes if nothing else.

There was still work to be done, in other words, and it will be interesting to see if Texas State can make more defensive progress despite nearly starting over on the line and in the secondary.

7. Starting over up front

Texas State's run defense wasn't exactly amazing in 2013, but it did improve. The linebackers were outstanding play-makers, especially for the scheme (4-2-5 linebackers don't always dominate the havoc-related portions of the box score), and despite injuries, the line was pretty deep with experience.

Experience in college football, of course, is a double-edged sword; it can assist you greatly, but it's guaranteed to disappear soon, and in 2014 TXST is tasked with replacing five of the six linemen who logged at least 10 tackles in 2013.

Franchione saw this coming and loaded up. He signed six junior college linemen in an attempt to stem the damage, and if at least 2-3 of them are ready to make noise at the start of 2014, the Bobcats could potentially survive without much of a drop-off. End Michael Odiari is undersized but aggressive, but he'll need some help from some instant-impact players.

Uncertainty looms at the front and back of this defense. The defensive line is rebuilding, and of the three safeties mentioned above, two (Matthews and Iwuji) are gone. There are some intriguing names waiting in the wings in the secondary -- David Mims II, Dila Rosemond -- but not as many sure things.

That said, the linebacking corps is one of the best in the mid-major ranks, and that will help quite a bit. Damion McMiller is gone, but in David Mayo and Colorado State transfer Michael Orakpo, TXST has a wonderful pair of play-makers; the two combined for 14.5 tackles for loss, 5.5 sacks, seven defensed passes, and three forced fumbles in 2013. Mayo is the sideline-to-sideline mess-cleaner, and Orakpo is a wrecking ball. Throw in a couple of promising young backups in Stephen Smith and Jerrid Jeter-Gilmon, and you've got an awesome unit. We'll see how much it can make up for the issues elsewhere.

Texas State was one of the better field position teams in the Sun Belt last season. Forcing 19 turnovers helped in that regard, but the Bobcats dominated in the punting game on both ends of the field. Punter Will Johnson beautifully mixed depth and height on his kicks, while Andy Erickson was one of the best return men in the country.

Johnson returns, as does a decent place-kicker in Jason Dann; plus, exciting Brandon Smith is back to return kickoffs. It's conceivable that TXST can put together another nice special teams unit without Erickson, though he's certainly tough to replace.

The offense should be in much steadier hands in 2014. There is both experience and competition at the quarterback position, and with minimal assistance from the pass, the running game should be strong. Texas State should expect to improve quite a bit from last year's No. 120 Off. F/+ ranking.

But will that lead to overall growth, or will it simply offset regression on the defense? You can build a solid mid-major defense around David Mayo and Michael Orakpo, but only if the line and secondary aren't outright liabilities. I'm not that worried about the secondary, but the line needs immediate help from the 2014 recruiting class, and that's sometimes a scary proposition.

If TXST can improve back to the No. 95-100 range, the Bobcats could once again eke out bowl eligibility. But getting too far beyond six wins will depend on a couple of upsets. Still, that I say that as a bad thing -- a third-year FBS program is decent but might not go bowling! -- tells you quite a bit about the job Franchione has done to date.

Building a program is hard, and in 2013, TXST managed to take a step backwards but still sneak out six wins. This program is getting healthier, even if there's still quite a bit of sand to push up the hill.