After the NCAA Rules Committee announced its proposed tempo rule -- according to which an offense could not snap the ball with 30 seconds or more on the 40-second play clock without incurring the world's most ironic delay-of-game penalty -- NCAA national officiating coordinator Rogers Redding said that Auburn would have incurred one penalty for an early snap in the BCS National Championship Game. While that number has been disputed, the consensus agrees the rule wouldn't have changed the title game much.

But that was just one game. What about the effect that the rule could have on other high-tempo offenses, or in other games? Here's the data from a selected cross-section of 2013 contests.

We focused on run-first, high-tempo offenses for one simple reason: Teams that throw the ball almost exclusively have high tempo numbers, because incompletions don't run much time off the clock. Those teams rarely snap the ball especially quickly, though, because the offense can't get receivers back to the line of scrimmage and in position fast enough to snap the ball.

TV will kill the 10-second rule, by Michael Bird 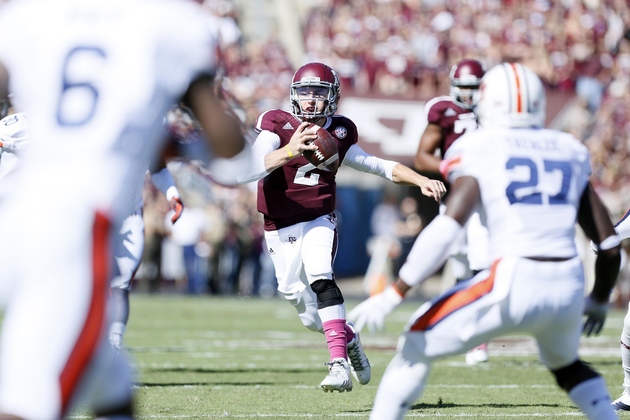 In most instances, we would be reticent to support a big business intervening in a sport's rule-making process. But if media companies stepped in to kill the inane rule proposal, we would welcome our new corporate overlords.

Why is it likely that CBS, Fox, and ABC/ESPN would make their opinions known, if need be? Because fans like offense. It is not a coincidence that the SEC had banner ratings in a year in which offenses ran wild due to experienced quarterbacks. Oklahoma State coach Mike Gundy made this point via Twitter. If Gundy has noticed, then surely television executives have as well.

No-huddle offenses work better in a society with shorter attention spans. At 2013 SEC Media Days, Nick Saban asked, "Should we allow football to be a continuous game?" He meant it as a rhetorical rejoinder against no-huddle offenses, but it actually doesn't work the way that Saban thinks.

Soccer has experienced significant growth in America, especially among younger fans. One of the factors in soccer's increased popularity is that it is a game of near-continuous action. Take out the delays for theatrical penalty appeals and application of magic spray, and you have constant action.

In contrast, baseball is suffering because of its slow pace of play. If any sport needs a 10-second clock, it's baseball. As the popularity of baseball decreases, the popularity of soccer increases. Would your average 15-year-old rather watch the Barcelona midfield exchange dozens of passes en route to goal or watch the Red Sox and Yankees foul off pitches in 20-second increments?

The major advances in soccer in the past 10 years have been the offensive and defensive value of short-passing to maintain possession and then the counter-attacking response, i.e. perpetual motion and its results. The major advance in baseball has been the importance of pitch recognition and working counts. The former has made soccer more appealing to watch; the latter has made baseball duller.

American football is headed towards the soccer side of the spectrum. Offenses are in constant motion, and defenses are having to respond.

Isn't that a more enjoyable TV experience than watching players stand in huddles? You think that broadcast companies with billions of dollars invested in college football won't notice that basic reality? Won't they have an incentive to answer Saban's question with an emphatic yes?

Fans like fast-paced football. Saban and Bret Bielema don't like no-huddle offenses, and they don't have to care about what attracts fans to modern football. Broadcast companies might not have subjective stylistic preferences for "normal American football," but they do care about factors that affect viewership.

If the broadcast companies' interests trump the interests of defensive-oriented head coaches, then the electorate -- in this case, college football fans -- is the winner.

Speed vs. speed: Arizona vs. Oregon

The Ducks became the poster child for hurry-up offense under Chip Kelly, but by 2013, they were no longer the fastest offense in their own conference. Oregon was just 39th nationally in snaps per game last season, ranking seventh in the Pac-12.

Nevertheless, the Ducks' offense is precisely the target of the proposed new rule: A run-first spread attack that varies its tempo but frequently goes into hyperdrive. Arizona, on the other hand, was second in the Pac-12 in tempo last year (seventh nationally) and operated in Rich Rodriguez's own version of the spread running game.  If there was a game in which the proposed tempo rule would play a factor, it was this one.

Penalties against both teams came in largely the same circumstances: The second or third snap of a new series, when the team had scripted the first few plays. But the teams split 133 snaps where the rule would apply (40 second clock running and not in the last two minutes of the half), including 82 with 20 seconds or more on the play clock. That only five plays came with 30 seconds or more on the clock, and that they came under such particular circumstances, shows how minimal the impact of the rule could be.

One team on a roll: BYU vs. Texas

In early September, BYU ran 72 times for 550 yards on the Texas Longhorns, a performance so impressive that it got Texas' defensive coordinator fired. Given the number of running plays, BYU's hurry-up style (the Cougars finished second nationally in snaps per game), and the absurd results, this is a game in which we'd expect a bunch of early snap penalties.

The Cougars committed one penalty on the first 40-second snap of the second half (the first snap after almost every change of possession is on a 25-second clock, so the rule does not apply) and another on the second play of a series late in the same period. Before the final series of the game, when the contest was out of reach and BYU was just running the clock out, BYU took 75 snaps in which the rule would apply. Just six of those were taken with fewer than 19 seconds on the play clock, and yet the Cougars managed to snap the ball just twice with 30 seconds showing and none with more than that.

Starting in a hurry: Baylor vs. Oklahoma State

Baylor coach Art Briles and Oklahoma State coach Mike Gundy have been vocal opponents of the proposal. Gundy likened it to basketball without the shot clock, despite the fact that his Cowboys were a fairly pedestrian 35th nationally in snaps per game last season. Baylor was fifth nationally in the same category, but runs a fairly run-heavy attack.

The Bears got themselves into trouble right out of the gate, snapping the ball with 30 seconds on the play clock on their second, third, and fifth plays from scrimmage.  From there, Baylor slowed down, and even took a handful of snaps with the clock nearing zero. Oklahoma State, on the other hand, never came close to committing a penalty, as Gundy's team only took two snaps all game with the play clock showing even 20 seconds or more.

Bielema vs. the hurry-up: Ole Miss vs. Arkansas

Arkansas coach Bret Bielema has been a longtime proponent of slowing the game down, and was one of the first coaches raising "player safety" as a rationale for fewer snaps.  Bielema also potentially played a key role in proposing the new rule; as a representative of the American Football Coaches Association, Bielema was in attendance at the NCAA committee meeting where the proposal was made. He's also got a personal rivalry of sorts with hurry-up coach Gus Malzahn of Auburn.

If there was a 2013 game that pushed Bielema over the top, might it have been Arkansas' 10-point loss to Ole Miss, in which Hugh Freeze's hurry-up offense wore Arkansas' defense down over 76 plays and scored two third-quarter touchdowns to seal victory? (The Auburn game would be another candidate, but the Tigers only ran 55 plays in that game, 18 fewer than their season average.) And would the rule have had an effect on that game?

Ole Miss rarely got a snap off with 20 seconds remaining on the play clock, let alone 30. In 52 snaps taken on a 40-second play clock, the Rebels beat the 20-second mark just eight times.

The one Ole Miss penalty came on a particularly comical bit of SEC officiating. After a five-yard rush by Ole Miss on first down, the 40-second clock began to run. Four seconds in, both the game clock and play clock were stopped momentarily for no given reason. The play clock was then reset and began running from 40 seconds. Ole Miss, which had enough time to substitute quarterbacks before the clock even began running again, snapped the ball with 30 seconds showing on the clock, even though 24 seconds had elapsed since the play clock had originally started.

Yeah, this new rule is going to work flawlessly.

The big one: Alabama vs. Auburn

The game of the year was arguably the impetus for the proposal. At least according to Auburn fans and conspiracy theorists throughout the SEC, Nick Saban's support stems in part from Auburn's use of the no-huddle hurry-up in this year's Iron Bowl. But would the rule have mattered?

This game presented two problems, one purely a function of television and the other a bigger problem with implementation of the potential rule. Auburn-Alabama was on CBS, and CBS only shows its play clock graphic once the clock runs below 20 seconds. That happened on every Alabama play but one (Alabama's one fast snap came after an Auburn defensive injury), but on just 27 of Auburn's 44 qualifying snaps.

In theory, calculating the play clock on the other 17 snaps would not be difficult: Listen for the whistle and count down the seconds on the video feed. And in theory, if the clock started on time every time, Auburn had two snaps that were definitely taken with 29 or 30 seconds on the clock. A review of the other snaps, though, showed that the clock almost never started on time. Instead, the clock operator started the play clock one to three seconds after the signal was given, meaning that those 29-second snaps would be made with 30 to 32 seconds showing.

And therein lies the biggest implementation problem, if the rule were to even pass. The time can be extended by a referee who gives the signal to start the clock late or a play clock operator who is slow on the trigger. The clock operator at Auburn would have no reason to slow the count on Auburn's offense -- it's not as if the TIgers were running up against the play clock with regularity -- and still didn't get it started on time routinely. Imagine what would happen if that clock dictates when a defense can substitute and whether the offense gets a penalty for moving too fast.

According to this review, the NCAA's rule proposal would've done the most damage to scripted series by run-first, no-huddle teams at the beginnings of drives. It appears offenses, like defenses, tend to slow down over the course of long drives.

The proposal wouldn't have impacted every play run by fast offenses, but it would've required up-tempo teams to adjust how they operate when they first get the ball back.

• The blue-chip ratio: Is your team championship-ready?