Surprise! South Alabama was actually quite salty last year, but some close-game struggles probably kept you from noticing. Regardless, the Jaguars could very well be a Sun Belt contender in just their third FBS season.

The middle of the F/+ rankings give us a look at the most average of average in college football -- the decent BCS teams in a conference full of better-than-decent squads, the successful mid-majors who separated themselves from the scrap heap, etc. You've got Minnesota, Indiana, Northwestern, Penn State, and Illinois from the Big Ten, all between 55th and 71st. You've got Ball State, Northern Illinois, and Toledo from the MAC, all between 57th and 62nd. You've got Pittsburgh, Maryland and Boston College from the ACC, and you've got Rice, Tulane, and UTSA from Conference USA. Major-conference teams hovering around .500 and mid-majors hovering around eight wins -- that's what you'd expect from the pudgy middle of the Football Bowl Subdivision.

You've also got South Alabama at 68th, just ahead of Illinois and Tennessee, ahead of C-USA champion Rice, and just behind teams like Maryland, BC, and Cincinnati. USA went 4-3 in the Sun Belt, a conference lower than C-USA on the totem pole, and finished 6-6 overall.

You might remember when the Jaguars nearly beat Tennessee in late-September, but that's probably the only time you noticed them. They lost to Southern Utah and Texas State and got whipped by Navy. They reached 6-6 in just their second season in FBS, which is an accomplishment in and of itself, but how in the world did they get to 68th? That's the territory of teams that managed to frequently look solid but never look too good.

For starters, USA mastered the art of the close loss. The Jaguars went 2-5 in one-possession games; they were closer to 10-2 than 3-9. They were two or three plays away from a run at the Sun Belt title. (The Sun Belt co-champions, by the way, ranked 86th and 90th.)

Outliers exist, and perhaps USA's inclusion this high on the list was an accident; the Jaguars did get a bit of an artificial bump in whipping a UL-Lafayette squad that was without star quarterback Terrance Broadway, after all. But that was only a minor bump, and the Jaguars spent most of the season hovering between 60th and 80th. This was a legitimately decent team.

One of the things F/+ is pretty good at is picking up on budding programs before the eyeball does. Texas A&M and Notre Dame each ranked much higher than it seemed they should have in 2011, then broke through in 2012. Michigan State was 15th in 2012 while finishing just 7-6, ahead of 10-win teams like Nebraska, Boise State, Clemson, Cincinnati, Louisville, and Northwestern; the Spartans broke through in a major way in 2013. Perhaps South Alabama is the mid-major example of such a team ready to make much louder noise in a short amount of time?

Perhaps. But the Jaguars must replace quite a few key members of the 2013 squad before a breakthrough can occur.

Quarterback Ross Metheny, who passed for 2,600 yards and rushed for more than 700 (not including sacks) is gone, but just about everybody else of note returns on the offensive side of the ball. The major areas of concern come on the defense, where a fast, active and undersized front seven must replace six of nine on the line and four of six at linebacker.

Head coach Joey Jones, an Alabama alum, has attempted to follow the Mini-Alabama model pretty closely. Defensive coordinator Kevin Sherrer was Nick Saban's director of player development in Tuscaloosa from 2010-12. Their combined résumé is based on strong, proven techniques.

Those techniques will get tested in 2014. If the defense is up to the challenge, the Jaguars could be a serious Sun Belt contender and could pose quite the challenge to Mississippi State in Mobile on September 13. Just as likely, however, is a step backwards on defense and a year of stagnation overall.

Obviously, the story could be different in specific games, but USA was not a team doomed by poor turnovers luck. That is sometimes the cause of poor close-game records, but for the season, as you see at the bottom of this post, the Jaguars were plus-1.1 points per game in terms of turnover luck.

Regardless, aside from the Navy initiation (welcome to FBS; it's time for you to get cut-blocked into oblivion), they were constantly competitive. The 2013 season was a great sign for the program's future, even if it didn't result in a bowl. 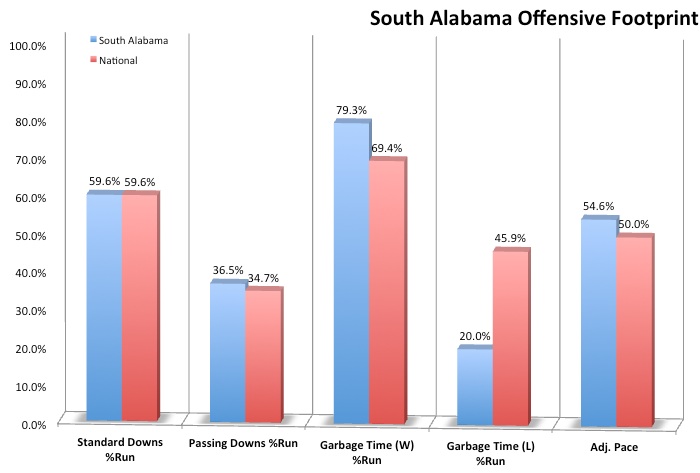 What might have hurt South Alabama as much as anything in close games was a simple inability to finish drives in the end zone. The Jaguars were 71st in terms of overall Off. S&P+, but they ranked just 103rd in Redzone S&P+ and averaged a below-average 4.2 points per trip inside the 40 against below-average competition. They settled for 1.9 field goals per game (only 13 teams averaged more per contest), and in five tight losses, they averaged just 4.0 points per trip and settled for nine field goals, missing four. One of the only things worse than settling for field goals is missing them. USA's failure to turn opportunities into points doomed them.

That can be rectified with an experienced offense and a place-kicker (Aleem Sunanon) who is no longer a freshman. But that will require the Jaguars to figure out a proper starting quarterback first.

5. Metheny was a lifeline

A former three-star signee for the Virginia Cavaliers, Ross Metheny took the South Alabama starting job around the beginning of conference play in 2012 and struggled through some growing pains (a 55 percent completion rate, 12 touchdowns to 12 interceptions, a sack rate nearing seven percent), but he was ready for (mid-major) stardom as a senior, passing for about 220 yards per game and rushing for about another 60 more. He cut his interception and sack rates almost in half, he led the Jaguars to a No. 57 finish in Off. F/+ (even with the drive-finishing issues) ... and then he was gone.

Metheny is basically the only starter not returning for USA in 2014, but quarterbacks are of course rather important. Metheny's solid efficiency keyed the Jaguars' attack, and there isn't an obvious successor. Alcorn State transfer Brandon Bridge challenged Metheny for the starting role in August but came up short, then completed only 44 percent of his passes when given the opportunity; he was used as part of a rotation in September for getting hurt, which perhaps suggests that he is the assumed starter. Still, his stat line was mixed.

Junior Trey Fetner has been used in a Wildcat role at times, and it will be interesting to see if these two are used in a dual role, or if Bridge, Fetner, or even redshirt freshman Brett Sheehan can win the job outright.

If the quarterback situation is resolved, there might not be another obvious, unanswered question for this offense. The top three rushers all return, as do the top four pass targets and five linemen with extensive starting experience.

The run game could still stand to improve a bit; short-yardage execution was woeful (USA was 126th in Power Success Rate, which certainly helps to explain the Jaguars' drive-finishing issues), and none of the returning leading rushers showed much in the way of explosiveness. Jay Jones was efficient, getting at least five yards downfield on over 40 percent of his carries, but if Kaleb Blanchard, the gem of the 2013 recruiting class, is ready, he could pretty easily surpass Kendall Houston and Cris Dinham for playing time.

It's difficult to find too many weaknesses with the receiving corps, however. Shavarez Smith is one of the best home run threats in the mid-major ranks, while tight end Wes Saxton and Danny Woodson II, a former Alabama signee, make for a hell of a possession duo. The offensive tackles are both returning all-conference performers as well. This offense is ready to roll ... as long as there's a quarterback around to drive. 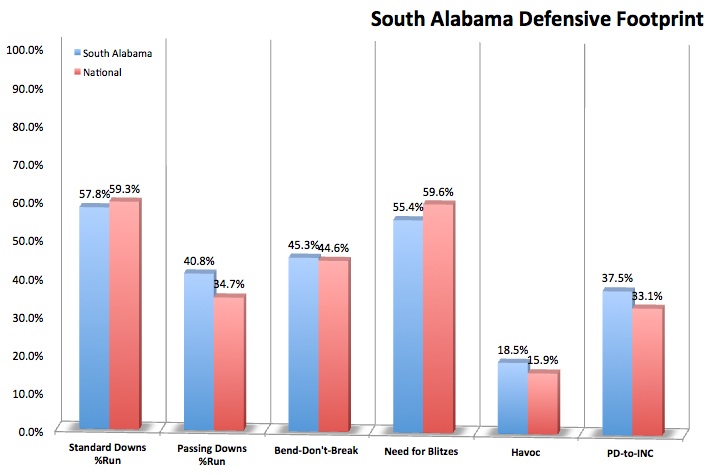 On a play-for-play basis, South Alabama's defense wasn't particularly great in 2013, but it was certainly active. The Jaguars gave up a few too many big plays and allowed at least 5.7 yards per play seven times in 12 games; they ALSO finished fourth in Adj. Sack Rate and 18th in the Havoc stat referenced above (percentage of plays with a tackle for loss, forced fumble or pass defensed). If you can't beat an offense on most plays, make the most of the wins you get.

USA's front seven specialized in making plays in 2013. Three linemen recorded at least 13 tackles for loss, and six others in the front seven had at least 4.5. The Jaguars tried to come at you from every direction, and it worked more often than not.

All is not lost. Maleki Harris is a wrecking ball in both pass coverage and near the line, and nose tackles Jesse Kelley and Jerome McClain were just as prolific as Jones on a per-opportunity basis. And players like Theo Rich and Desmond LaVelle made a play or two in backup roles. So perhaps the play-making will be equal to last year's, and if the new starters can also avoid getting pushed around quite as much, maybe that's a fair trade.

USA's defensive front was certainly pushed around at times, but the biggest issue for the Jaguars came in allowing big pass plays. If the pass rush didn't get to opposing quarterbacks, there were probably receivers open downfield.

With six of the top seven tacklers in the secondary (and nine of 10) returning, experience won't be an issue. Talent, however? The jury's still out on that one. Corners Qudarius Ford and Montell Garner did at least make a few plays to go with the ones they gave up (16 passes defensed, 3.5 tackles for loss), but the safeties didn't do much of anything besides making tackles 20 yards downfield. Three-star JUCO transfer Nigel Green will be asked to make an immediate impact, and three of the most highly-touted freshman signees in the 2014 class are defensive backs. There's potential for an immediate talent infusion here, but we'll see how quickly it can make a difference.

10. The schedule will help

The Jaguars are already the No. 3 FBS program in the state of Alabama.

Just because you were underrated one year obviously doesn't mean you're guaranteed to thrive the next. If the reasons for South Alabama's top-70 finish are now all gone, there's nothing saying the Jaguars won't fall back to 90th or worse.

USA has a decent chance of avoiding that fate, though. The quarterback and rush end positions are concerns, but Ross Metheny wasn't exactly infallible, and the backup linemen really did make some plays when given the opportunity. I don't know if I see a top-70 finish happening again, but ... top 80? 85? Why not?

A ranking of 85th or better would easily place South Alabama among the top two or three in the Sun Belt, but the schedule is rough. USA avoids ULM, but trips to Arkansas State and Louisiana-Lafayette might preclude a Sun Belt title run. Plus, the non-conference slate features two SEC opponents and another bout with Navy, which drubbed the Jaguars last year.

Joey Jones is building something impressive rather quickly in Mobile, but it's hard to say for sure that South Alabama will end up finishing too much better than it did last year. But the Jaguars are already the No. 3 FBS program in the state of Alabama; that's impressive in and of itself.

• The blue-chip ratio: Is your team championship-ready?

• The NCAA hurry-up proposal is doomed: How it would’ve changed 2013