Head coach Larry Blakeney's legacy at Troy is set already, but if he has one more rise to Sun Belt power in him, it begins this year. His Trojans have plenty of questions to answer at quarterback and on defense, but Troy's got some play-makers.

Twenty-four years after leaving his post as the receivers coach for his alma mater, Auburn ... about 21 years after he took the fall for allegedly funneling money to former Auburn defensive back Eric Ramsey ... 13 years after leading Troy to FBS, having already won 76 games in 10 seasons at the FCS level and reached the FCS playoffs seven times ... 10 years after beating Missouri ... seven years after beating Oklahoma State ... Larry Blakeney and his Troy football program are still chugging along.

The Sun Belt is a home for damaged goods. The really good coaches probably only stay for a few years before they get called up to a bigger school. Spend too long here, and there's probably a reason why. Blakeney's two-decade presence at Troy was likely spurred by the Auburn sanctions, which rendered him unhireable for quite a while, but to say the least, he has made the most of his situation.

His last two Troy teams have been just salty (and young) enough to suggest that he could have one more push in him. Whether that comes in 2014 could depend on whether one of three intriguing quarterbacks emerges.

Well, that, and whether a wretched defense improves at least a little bit.

2. The offense came around

If you saw only one Troy game last year, it was probably the 51-21 loss to Ole Miss, in which Ole Miss gained a cool 751 yards (8.1 per play) on the Trojans' defense. It wasn't always that bad -- or, at least, Troy didn't always play offenses that good -- but that game told you everything you needed to know about Troy's limitations in 2013. The defense allowed at least 6.0 yards per play in 10 of 12 games and at least 7.0 yards per play in four.

Troy's defense ranked below the following awful defenses in the Def. F/+ rankings: New Mexico State, Georgia State, Nevada, Central Michigan, FIU, Kent State, Army, Miami (Ohio), and UMass. Those nine teams combined to go 21-87, which puts the Trojans' own 6-6 record into perspective. With just a bad defense, and not an awful one, Troy could have gone about 8-4 or 9-3. Troy lost three games by a possession or less and suffered from both bad defense and bad turnovers luck.

This is an encouraging thought, really, if you think Troy's defense can improve. The offense is in pretty good shape, and it improved by almost a touchdown over the second half of 2013.

Replacing a four-year starting quarterback is never fun, but if a new signal caller emerges, the Trojans' offense is experienced enough to do damage. Will the defense simply undo all the damage again? 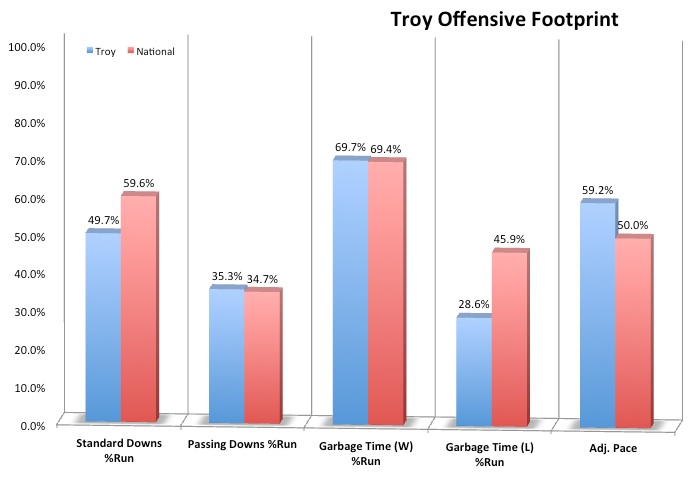 When a play worked for Troy in 2013, it worked. The run game was relatively inefficient, keeping defenders out of the backfield but not getting runners very far downfield; the passing game, on the other hand, clicked. Quarterback Corey Robinson's stat line (11.3 yards per completion) and a low sack rate tell us that Troy wants to get the ball out of the quarterback's hand quickly, but that didn't stop the Trojans' top three targets from averaging 15.0, 16.9, and 13.1 yards per catch, respectively. Six Troy receivers caught at least one pass 40 yards, and the most explosive of the bunch, junior Bryan Holmes, returns.

Pretty much everything I said about Kolton Browning in Tuesday's ULM preview could be repeated in regard to Corey Robinson. A four-year starter, Robinson was behind center for Troy's fifth bowl game in seven years, it's complete collapse, and its slow rebound. The four-year starter threw for almost 14,000 yards and 81 touchdowns, and after some interception issues in his first two years (30 interceptions and a 3.0 percent interception rate), he slowly phased out the mistakes (18 and 2.2 percent).

Robinson was the face of the quick-passing Troy offense for a long time, and in 2014, not only is he gone, but so is his backup, dual-threat Deon Anthony.

The race to replace Robinson features three players who are certainly not without their strengths. Dallas Tidwell is a towering presence, a pro-style-to-the-core prospect who could be well-suited to Troy's catch-and-throw style. But he'll get competition from a pair of interesting JUCO prospects.

Connor Bravard succeeded Kansas State's Jake Waters at Iowa Western Community College and completed 62 percent of his passes with 23 touchdowns to nine interceptions in 2013. Dontreal Pruitt, meanwhile, threw for 45 touchdowns with just seven picks and a single sack while leading East Mississippi Community College to the NJCAA national championship. He averaged 15.0 yards per completion and simply dominated, but his size likely limited his recruitment options.

Of these three, the odds are pretty good that one will be ready to play at a high level in 2014. And if that's the case, the offense could be one of Troy's best, especially if a line with three returning starters (including all-conference tackle Terrence Jones) and 54 career starts can gel a bit further after a shaky 2013.

When it comes to intended touches (carries plus targets), Troy did a lovely job of spreading the ball around, and that should come in handy this fall. Three players certainly earned a large portion of the targets -- running backs Brandon Burks and Jordan Chunn combined for 27.5 intended touches per game, and wideout Eric Thomas averaged 8.5 -- but eight other players averaged at least 1.8 per game. Two of the big three return, as do five of the little eight. Plus, youngsters like running back Tim Longmire and any of three JUCO-transfer receivers could be ready to demand some touches, as well.

There is solid experience in all directions, but the most exciting returnee is probably in the receiving corps. Bryan Holmes had a breakout season as a sophomore, catching two-thirds of his targets and averaging nearly 17 yards per catch. His big games were huge: He caught six passes for 117 yards against Arkansas State and three for 128 against Texas State.

If we divide Troy's receiving corps into two groups, the go-long guys and the extended-handoffs guys, Holmes is the leader of the former, and the bouncy B.J. Chitty and Chandler Worthy are probably the leaders of the latter. 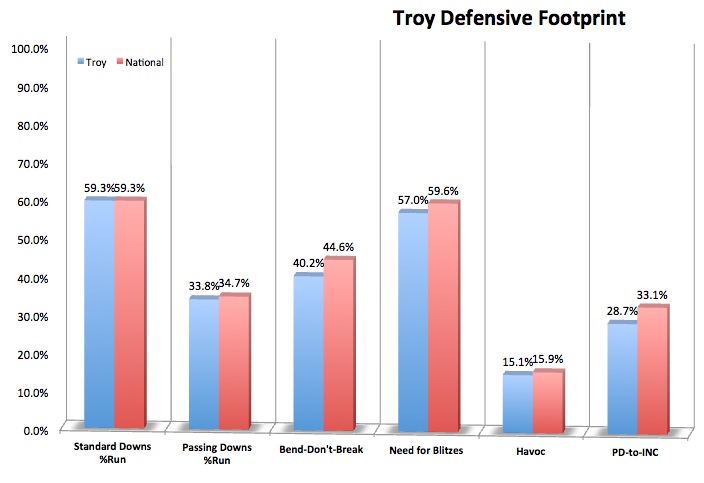 As good as Troy was at generating big plays on offense, [Random Troy Opponent] was even better at it. Troy's defense turned almost every offense into a juggernaut, leaking big plays like a sieve despite a solid run defense and decent pass rush. When a defense is good at a few things but still awful overall, you almost assume that things will naturally improve the next year. And maybe that will be the case. But as Troy attempts to strengthen its weaknesses, its strengths could lose equal ground.

It took some serious breakdowns in the passing game to drag Troy's defense down despite, as you see above, some downright mediocre run stats. Troy ranked 73rd in Rushing S&P+, 59th in Adj. Line Yards, and 46th in Opportunity Rate, which points to a run D with promise ... at least until you notice that only two of last year's top six tacklers on the line return. Tyler Roberts is a dangerous, speedy pass rusher, and one-time Arkansas signee Lonnie Gosha has shown promise as a quick play-maker on the interior.

And knowing that there would be attrition up front, Blakeney went out and signed four junior college linemen. The end position might be in decent hands, but Gosha needs a partner on the inside, be it Bryan Slater or one of the JUCO tackles.

There is no good place to mention this, so I'll just place it here. Troy got a significant reminder of the triviality of wins and losses when end Jadarius Garner was found dead on the side of a Mississippi highway on January 2. We talk about strategies and tactics and recruiting and trends and stats in these previews, but these players are all 20-year old (or so) human beings, and they'll be dealing with more than film study this year. Condolences to both the Garner and Troy football families.

A good portion of Troy's success will come from the ability of Blakeney, defensive coordinator Wayne Bolt, corners coach Al Pogue and safeties coach Dustin Landry to craft quick, significant improvement in the secondary. Despite seniors at both primary safety spots, Troy gave up an infinite number of big plays.

The top three cornerbacks (including starters Chris and Ethan Davis, who at least showed promise in picking off or breaking up 19 passes) and plenty of other experienced hands return and are joined by JUCO transfers Ta'Jarvis Fuller and John Night. We'll see if the return of anybody is actually a good thing.

10. Fewer than six wins would be disappointing

When your stalwart starting quarterback leaves and your defense is still an enormous question mark, it's hard to predict too much success. But the replacements at quarterback are exciting, and the winner of the job will have one hell of a supporting cast. The defense isn't going to get worse, and I think of a top-100 finish for Troy are at least decent.

Now, pretend Troy is indeed a top-100 team and look at the schedule. The Trojans should win at least three of four conference home games and at least two conference road games. Factor in wins over Abilene Christian and, in theory, UAB, and you're at seven wins with home upsets of Duke or UL-Lafayette at least a possibility.

This isn't a high bar, but a top-100 ranking and seven or eight wins would draw Troy all the way back from the malaise that briefly threw the Trojans for a loop in 2011. Blakeney's legacy is set already, but if he has one more rise to Sun Belt power in him, it begins this year.