The big 2014 UMass football preview: It won't get any worse

In replacing Charley Molnar, UMass went with a coach who not only has a lot of experience, but has experience coaching at UMass. Mark Whipple returns to Amherst for his second go-round as head Minuteman. Godspeed, coach.

Share All sharing options for: The big 2014 UMass football preview: It won't get any worse

1. Two years is not a long time

Rebuilding tends to take a while, especially when a rebuilding job converges with an upgrade in your level of competition.

When Notre Dame offensive coordinator (and longtime MAC assistant) Charley Molnar took over the UMass head coaching job in 2012, he inherited a team that was simultaneously moving up to FBS and coming off of its worst three-year win total (16) since 1995-97. He talked a big game*, but while I assumed the Minutemen's 2012 campaign would be "largely forgettable," I didn't foresee what actually occurred. UMass went 1-11 and ranked 122nd in the F/+ rankings in 2012 (with the No. 123 offense), then improved to 1-11 and 118th (122nd on offense).

* Wow, did he talk a big game. My favorite: "Or we can say ‘Wow, how did UMass do that? How did UMass move from I-AA football to a [team] that plays in a sold-out Gillette Stadium?'"

There are different ways to go 2-22, I guess. You can start hopeless, grow more experienced and competitive, and hint at a breakthrough in the coming year or two. Or, in Molnar's case, you can experience almost no growth whatsoever. Citing a lack of growth and an alarming dissipation in student/alumni enthusiasm, UMass athletic director John McCutcheon let Molnar go right after Christmas.

Two years never feels like enough time to properly evaluate a coach, especially when he takes on a pretty tough job. Sometimes it just takes a while; for instance, Bobby Hauck went 4-21 in his first two years at UNLV, but in his fourth year, he engineered the Rebels' first bowl bid in almost 15 years. But while one can almost always question firing a coach so soon, it's hard to build too much of a case in Molnar's defense. UMass was awful and hadn't provided any reason to believe things would be getting better soon. And two years after starting fresh, UMass starts over.

UMass got a late start in its coaching search, letting Molnar go a few weeks after Coaching Change Season began in full force. The Minutemen did not have the pull of a strong history or a bright future, and there weren't necessarily a lot of exciting candidates with built-in UMass ties.

Despite rather long odds, however, they indeed found an interesting name with quite the history in Amherst: Mark Whipple. Whipple is not exactly an up-and-comer; he's 56 years old and has spent the last decade of his career as an offensive assistant at both the NFL (Pittsburgh, Philadelphia, Cleveland) and college (Miami) levels. He hasn't been a head coach in 11 years, but if you're looking for a mix of both experience and Northeastern ties, Whipple has quite a bit of both. He became head coach of the New Haven Chargers in 1988 at the age of 30, moved on to Brown in 1994. In 1998, he not only became the head coach at UMass, but he also won an FCS national title in his first year. In six years at UMass, he reached the playoffs three times and won 49 games.

In all, Whipple won 121 games in 16 seasons as a head coach in the Northeast. And then he became a relatively well-regarded, pro-style offensive assistant. He has proven he can win in the very office he now occupies (at a different level of competition, yes). It's hard to imagine a hire much better than that. There's no guarantee that he will succeed, but he's got as good a chance as anybody.

It shouldn't be a surprise, then, that UMass had absolutely no home-field advantage whatsoever in 2013.

The goal of the Adj. Score is to project how a team would have done against a perfectly average opponent. In 2013, UMass played well enough to stay within a touchdown of an average opponent just once, and that happened on the road, in a 21-point loss to a solid Bowling Green squad.

This was a bad team. Let's just move on. 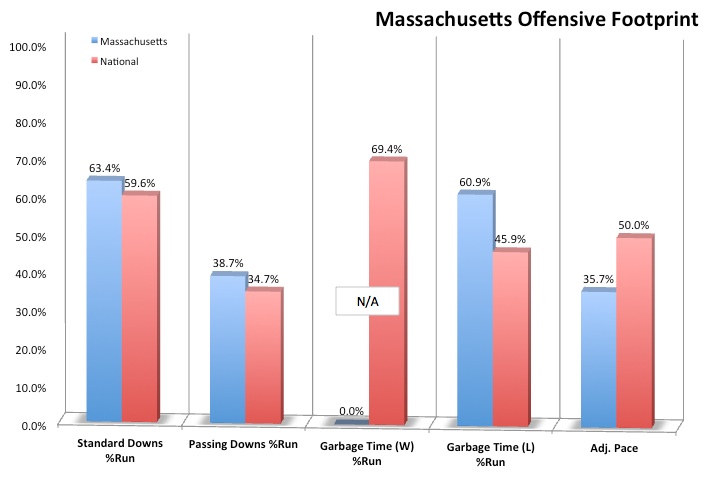 There are a lot of ways to tell you how awful UMass' offense was in 2013. This might be my favorite: 34 FBS teams averaged at least 2.5 points per possession, including the MAC's Toledo, Bowling Green, Ball State, and NIU. UMass, meanwhile, averaged 2.4 points per trip inside the 40. Never mind all of the possessions that didn't reach the 40.

Let's put that another way: If every single UMass drive had started at or inside the opponent's 40-yard line, the Minutemen still wouldn't have ranked in the overall top 30 in points per possession.

Enter Blake Frohnapfel. A two-year backup behind Marshall's awesome Rakeem Cato, Frohnapfel is utilizing the graduate transfer rule and heading from Huntington to Amherst, where he will be expected to immediately challenge returning starter A.J. Doyle for first-string honors.

With Frohnapfel, Doyle, and a couple of relatively interesting youngsters, Whipple and quarterbacks coach Liam Coen will have options behind center. And if they can go about solving that problem ... well, there are still plenty of items on the to-do list, but the biggest one will be checked off, at least.

5. A high degree of difficulty

All things considered, Tajae Sharpe might be a hell of a wideout. The junior from Piscataway was the No. 1 and No. 2 target for UMass in 2013, and when tight end Rob Blanchflower was lost for the season with injury (he played only six games), Sharpe was the No. 3 target as well. When you consider the quality of the quarterback and the fact that said quarterback was frequently trying to pass on second- or third-and-long, Sharpe's 60-percent catch rate and 6.7 yards per target might have been super-human averages.

Sharpe still has a couple of years to make a name for himself, and there's at least a chance that his supporting cast improves in 2014. Blanchflower is gone, but almost every wideout returns (for what that's worth), and the receiving corps will be plumped up by both JUCO tight end Jon Denton and Penn State transfer Alex Kenney. Kenney has never lived up to his four-star recruiting status -- he's caught 21 passes for 207 yards in three years -- but from an athleticism standpoint, he still represents an upgrade. If Sharpe gets any support at all, he might have all-conference potential.

Of the seven linemen who started at least one game for UMass in 2013, three were freshmen, and one was a sophomore. (Granted, three were also seniors.) So when you see that the Minutemen finished 126th, dead last, in Adj. Line Yards, know that the line producing those awful numbers was relatively young.

Pass protection was a strength, albeit one helped by a quick-passing style, but at the very least Whipple can plan on having an increasingly experienced line over the coming years. Now they'll just need to find running backs to take advantage of the blocks delivered. It was a chicken-and-egg situation last year. 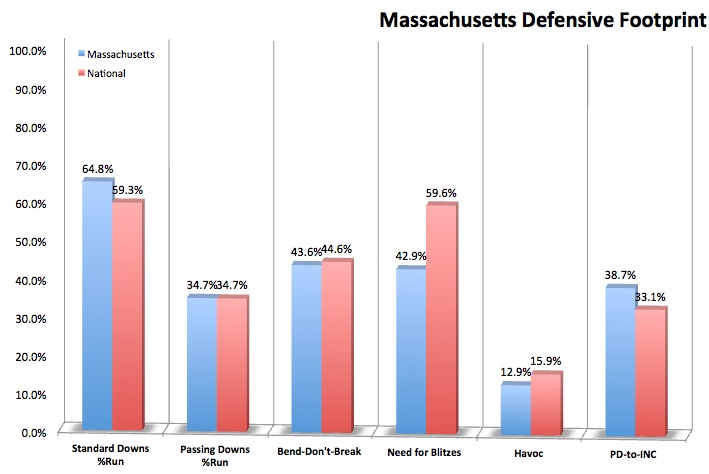 When UMass decided to get the Mark Whipple Band back together for 2014, Whipple brought along his bass player. Tom Masella was Whipple's defensive coordinator at UMass in 2002-03 and has racked up head coaching experience at four Northeastern colleges: Fairfield, Boston U., Central Connecticut, and Fordham. He recently added offensive coordinator experience at Wagner as well, just for grins.

Masella inherits a defense that was further along than its offense, but that's not necessarily saying a lot. UMass was pretty good at stiffening in the red zone, but the Minutemen faced far too many opportunities to prove their red zone prowess. The secondary is pretty deep and aggressive and could become a strength in the right coordinator's hands, but the front four needs quite a bit of work. The line produced 17.0 tackles for loss, a pretty meager total, but those responsible for 14.5 of those TFLs are gone, and the Minutemen are all but guaranteed to feature a few freshmen up front.

If the front seven can help out -- a pretty significant "if" -- the secondary could thrive (relatively speaking). Randall Jette's passes defensed-to-tackles ratio (12 PDs, 34.0 tackles) suggests he's pretty effectively aggressive (that, or he misses a ton of tackles), and safeties Ed Saint-Vil and Joe Colton are decent play-makers. You see a pretty high level of activity in these stat lines, and I would say that if the D comes around to any degree in 2014, the secondary will be the reason.

... Trey Dudley-Giles could become quite a weapon returning them. We're dealing with small sample sizes here, but Dudley-Giles was a solid returner, and if the Minutemen can find a semi-capable punter, special teams could be a relative strength.

10. It probably isn't going to get worse

Whipple is by no means a young up-and-comer, but one can see why UMass was attracted to him. He has a lengthy résumé, and once upon a time, he was able to build a pretty competitive team in Amherst. And even though that was at the FCS level, UMass was at least a great FCS program. The Minutemen would have struggled to win four or five games at even the FCS level these past two years.

This is still a really hard job, even for a seasoned, steady hand. And even if Frohnapfel sticks, and Tajae Sharpe turns out to be excellent, and a more experienced offensive line gels, and the secondary turns out to be solid, and special teams turns into a minor strength ... we're still probably only talking about a team that ranks in the No. 100-110 range and has no home-field advantage to speak of.

Still, we know that things probably aren't going to get worse, and we know that whatever steadiness is possible at this program at the moment, the odds are decent that Whipple will find that. Eventually.