The big 2014 Akron football preview: Athletic, exciting, and one year away

For the first time in almost a decade, Akron seems to be building something. Terry Bowden might need one more year to get the Zips into the MAC's upper echelon, but they are relevant and exciting, and if they pull an early-season upset, look out.

Share All sharing options for: The big 2014 Akron football preview: Athletic, exciting, and one year away

...but they mattered for the first time in a while. You noticed they existed. They almost made a bowl.

Akron was awful in 2009, a little worse in 2010, and still a little worse in 2011. In 2012, Terry Bowden took over a program just seven years removed from a MAC title, but it was perhaps the most hopeless in a conference that always features some hopelessness at the bottom. Kent State was about to break through in 2012, EMU was coming off of a 6-6 year, and we didn't yet realize just how awful UMass was going to be.

In the end, the one Akron game you watched in 2013 -- No. 17 on this list -- just barely kept UA away from bowl eligibility. But there's consolation in coming so close. After winning six games from 2009-12, Akron won five last year and returns a boatload of experience in 2014. Hell of a job so far, Coach Bowden.

It had been eight years since Akron won four of five games. Back then, the Zips lost at Ball State but beat Bowling Green, Ohio, Kent, and Northern Illinois to secure both the MAC East title and, in Detroit, the MAC title.

This has been a program specializing in winning between four and seven games (the Zips have done so in 20 of 28 FBS seasons), never reaching a bowl but always finishing ahead of other MAC comers. But J.D. Brookhart's time in charge flamed out at the end (3-9 in 2009), and the hire of Rob Ianello (2-22 in 2010-11) proved disastrous.

If nothing else, Akron's late-2013 improvement proved that, well, Akron is capable of improving. It had been a while since there was affirmation of that.

After competitive, exciting losses to Michigan and UL-Lafayette, the Zips bottomed out for a bit. But there's no question they rallied late in the year, mostly by becoming above-average on defense and not completely hopeless on offense. The weakness should get stronger in 2014, and the strength has a chance to do the same if a blue-chip transfer up front pans out alright. 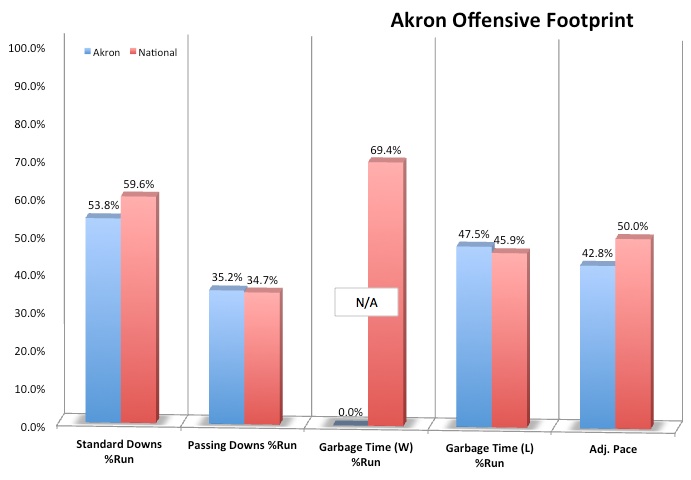 Running back Jawon Chisholm averaged a healthy 6.0 highlight yards per opportunity in 2013; in a four-game span late in the season, he rushed 79 times for 475 yards (6.0 per carry) and four scores. Big Zach D'Orazio turned into a big-play threat, averaging 13.5 yards per catch with a long of 77, and L.T. Smith averaged 17.8 yards per catch. In all, eight Zips had at least one catch of 29 yards. There is big-play potential here, as evidenced by Akron's No. 52 ranking in IsoPPP above.

Now ... about that efficiency. Big plays don't necessarily matter if you're facing a steady stream of second- and third-and-long. Despite big-play potential, Akron had the third-least-efficient offense in the country on standard downs and the eighth-least efficient overall. The passing game was inefficient, and the run game was horrifically inefficient. Despite a lot of short passing and a lot of passing on standard downs (when the defense has to account for the run), the Zips just couldn't get anything going until they had to; the short passes were too short and not completed nearly enough.

If you're going to average 10.8 yards per completion, your completion rate better be around 70 percent. Kyle Pohl's was 56 percent. That's not going to work.

4. Get to know Fransohn Bickley

Fransohn Bickley was a star receiver for Akron's storied St. Vincent-St. Mary high school program. He racked up over 1,100 receiving yards as a high school senior, scored on punt returns, was a member of a state championship relay team, and was a contributor on the basketball team as well. He's quick as hell and was the No. 2 target for the Zips as a true freshman.

The top five Akron wideouts not named Bickley average 6'2, 206, which sets the table pretty nicely for a waterbug type, albeit one who makes Brandon Banks look like he's carrying a few extra pounds.

5. Waiting on the line

So when a running back shows strong explosiveness but almost never makes it into the open field (Jawon Chisholm made it five yards downfield only 32 percent of the time in 2013), one can pin a lot of his problems on the offensive line. Obviously some of the blame could go to the runner if he dances around too much in the backfield or doesn't take advantage of the blocks given to him; this becomes reasonably relevant when you notice that, while Chisholm's Opportunity Rate was just 32 percent, backfield mate Conor Hundley's was 41 percent. Perhaps Chisholm brought some of his problems on himself.

Still, no matter who was carrying the ball, the line's run-blocking stats were gruesome. Akron ranked 124th in Adj. Line Yards and 114th in Stuff Rate (run stops behind the line). The quick passing game helped the sack rates out a bit, and Chisholm's late-season success suggests that the line figured some things out.

But the loss of three players with at least eight career starts suggests that the line might take another step backwards, at least early in the year. Two-year starting center Travis Switzer does come back, and four players have amassed a semi-respectable 50 career starts, but this line will probably need some time to gel. 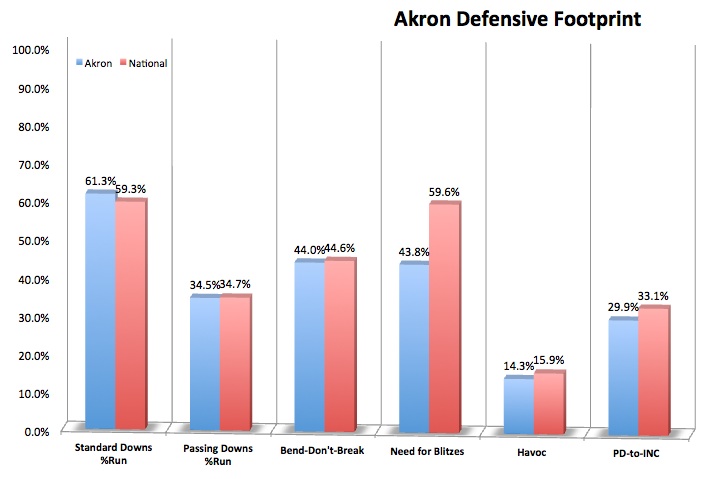 A healthy defensive success rate -- and to be sure, Akron's No. 39 ranking in Success Rate+ is pretty healthy -- suggests a pretty high level of aggression. No bend-don't-break here. Play tight defense, including perhaps a healthy amount of man-to-man coverage, make tackles, and force mistakes. Akron did this pretty well and leveraged opponents into passing downs rather successfully.

Once in passing downs, Akron had one of the 20 most efficient defenses in the country ... and the third-worst when it comes to big plays allowed. What's the opposite of bend-don't-break? Because Chuck Amato's Zips defense was that.

7. Transfers in the trenches

The defensive line was a strength in 2013, which could be a problem considering the top two ends and two of the top three tackles are gone. Colorado State transfer Nordly Capi is back, and nose guard Cody Grice is short but quick, but the depth needs some plumping up.

Technically, depth could be an issue no matter what Se'von Pittman does, but if the former Ohio State signee who transferred to UA after some off-the-field issues still has some of that four-star potential in him, he could join Capi and Grice in one of the MAC's best starting lines. And if one of two three-star freshmen is ready to roll, that will help immensely.

Bowden was known for taking in second-chance kids during his tenure at North Alabama (2009-11). In doing the same at Akron, he is building one of the most high-ceiling defenses in the conference. Akron will have three former four-star recruits scattered among its front seven, and while these players still have hype to live up to, one has to like the athleticism and potential.

The secondary allowed almost as many plays as it made, but if there's one player Akron could miss severely in 2014, it's Malachi Freeman, who intercepted or broke up almost as many passes (15) as the rest of the Akron secondary combined (17). He made a ton of tackles, which suggests both that he spent a lot of time near the line of scrimmage and that the man he was covering caught plenty of passes.

In all, the secondary returns only one first-stringer but all second-stringers. Make of that what you will.

Freeman's absence could change the identity of the defense a bit, but expect similar aggression overall. Chuck Amato is still the coordinator, after all.

9. Dragged down by special teams

The most positive aspect of Akron's special teams unit in 2013 was that opponents tended to miss makeable kicks. That obviously isn't a very replicable trait from year to year.

Everybody returns, including Bickley at kick returner and a solid punter in Zach Paul, but for a team looking for one more close win to crack bowl eligibility, special teams didn't help much.

Start back up at the top of the returnees list. Kyle Pohl and Zach D'Orazio are juniors. So are backups like Conor Hundley and receivers Tyrell Goodman, Andrew Pratt, and Imani Davis. Bickley is a sophomore, as is receiver Mykel Traylor-Bennett. There will be at least two juniors on the starting offensive line, plus perhaps a freshman or a sophomore. On defense, Se'von Pittman is a sophomore. Cody Grice is a junior, as are linebackers Jatavis Brown and Dylan Evans.

There are some high-impact seniors here, from Jawon Chisholm on offense to a good chunk of the secondary. But whatever Akron accomplishes in 2014, a hefty core of potential difference-makers will return in 2015.

This is good news, as I'm not sure the schedule will cooperate enough for Akron to get to a bowl game. If you assume that Akron improves to the No. 90-100 range -- certainly a possibility -- you can see three likely conference home wins against dreadful MAC squads, plus a win over Howard to start the season. That's four. Without a non-conference upset, the Zips would have to win two of three at Buffalo, Kent State, and Ohio to get to six. To get to seven (and a more likely bid) you need to either win all three or pull an upset.

That's doable, sure, but the most likely scenario is probably another year with five or six wins, followed by a breakthrough in 2015. But Akron fans have been waiting a while; waiting one more year might not be the end of the world. This program has momentum for the first time in nearly a decade. That's good enough for now.