Pete Lembo is one hell of a program pilot, but as he enters his fourth year as Ball State's head coach, he faces a pretty stiff challenge: life without quarterback Keith Wenning. If a quarterback emerges and the defense can stay healthier than it did last year, the Cardinals could again challenge for the MAC title.

It's not hard to analogize head coaches and pilots. You've got hundreds of buttons to push and diverse meters to watch. You (usually) have to put in a certain number of hours before you are eligible to become the pilot, and even more hours before you are allowed to pilot a high-performance aircraft. Failure in one area can doom successes in all others. Et cetera.

Piloting one flying machine can be different than piloting another. Getting a twin-engine Gulfstream into the air and back down is in almost no way analogous to flying an SR-71. To succeed in one job sometimes means you must "unlearn everything you knew about other aircraft," as the Blackbird pilot put it.

We don't know if Ball State head coach Pete Lembo is destined to become a high-performance aircraft pilot one day, and if he reaches that status, we don't know for sure how he might do. But stepping back and surveying his career to date, one can conclude this: if it can fly, Lembo can get it into the air.

I covered all of this last year ...

He inherited a nice Lehigh program from Kevin Higgins, went 11-1 in his first season, and won at least eight games in each of the next four years. At Elon, he inherited a Southern Conference program that was all-potential, minimal-production; the Phoenix had gone just 14-42 in the five years before his arrival. He went 5-6 in Year 1, then reeled off four straight winning seasons and a 2009 FCS playoff appearance. And at Ball State, he inherited a team in serious flux. The Cardinals had gone 12-2 in 2008, Brady Hoke's final year in charge, but they went just 6-18 in two years under Stan Parrish. Lembo engineered an immediate, two-game improvement in 2011, then reeled off a surprising 9-4 season in 2012.

In just over a decade, Lembo has won, and won pretty big, in the Patriot League (northeastern, with mostly need-based aid for players), the Southern Conference (an FCS powerhouse), and the MAC (a midwestern mid-major).

"One stat that one of my assistants threw at me recently: There are only seven head coaches that have won nine or more games at three or more schools," Lembo told me. He's one of them.

... so I'm repeating myself. But it's worth reviewing in the wake of a 2013 season in which Ball State took yet another step forward. The Cardinals won 10 games for just the second time in three decades, came within a quarter of the MAC West title, and ranked in the F/+ top 60 for the first time in six years. The defense is still a work in progress, but the offense arrived. And if it can find a new quarterback, it should thrive again in 2014.

If they could get a washing machine to fly, Pete Lembo could land it. And if he keeps it up in Muncie, he'll be manning a pretty large aircraft in the not-too-distant future.

2. The yards kept piling up, for better and worse

That said, the defense was pretty close to average at the beginning of the year. But as the offense clicked late in the season, the defense lost its way.

Depth and injuries appeared to take a toll as the season progressed. Three of the eight primary defensive linemen missed at least one game, two linebackers played just about every snap (and one missed a game as well), and while the tackles were well-distributed in the secondary, so were the injuries and missed snaps -- only three of the nine primary defensive backs played in all 13 games. This played a role in the Cardinals' sketchy late-season defense, but it also could have played a role within each of three losses; Ball State was outscored 31-0 in the fourth quarter of two regular season losses and gave up a last-second scoring drive in a sloppy, windblown GoDaddy Bowl.

A team with Ball State's November offense and September defense would have probably won the MAC; alas, the Cardinals fell just short of the title game and gave themselves something more to shoot for despite a high level of overall success. 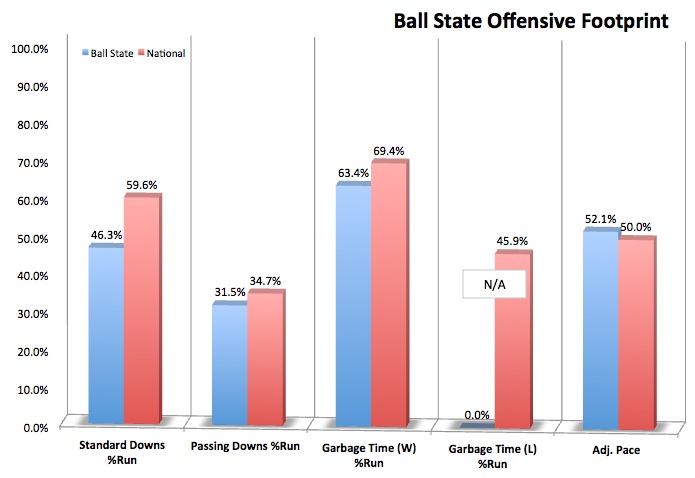 Throw early, throw often. With Keith Wenning behind center, that was Ball State's offensive mantra in 2013. We'll see how much that changes now that Wenning has graduated, but the Cardinals' quick-strike offense was wonderfully effective last fall. Ball State's 50.5 percent success rate was one of the seven best in the country, and while the big plays could have been a little bigger, BSU didn't need many to big gains to move points.

Of course, the relative lack of big plays may have hurt Ball State late in games as defenses found a rhythm against the efficiency passing. Look at the per-quarter rankings above -- BSU was 39th and 41st in the first half, 79th and 94th in the second.

Keith Wenning's progress as Ball State's starting quarterback mirrored the Cardinals' growth as a whole under Lembo. A four-year starter, Wenning was Stan Parrish's last quarterback in 2010; his passer rating improved from 111.3 as a freshman to 125.1 to 134.8 to 154.4. He completed around 64 percent of his passes all three years under Lembo, but the per-completion yardage improved (from 9.7 to 10.3 to 13.0), and the interception rate dropped (from 2.4 percent to 2.2 to 1.4). He took a leap in 2013, and so did Ball State's offense.

Four-year starters don't become fifth-year starters, however. Wenning moves on, and his replacement is far from obvious.

Ozzie Mann took backup snaps last year but did absolutely nothing with them, getting sacked more times than he completed passes. Kyle Kamman was the team's holder on special teams but did not throw a pass. Jack Milas was the highest-rated of the three from a recruiting standpoint, but he's a redshirt freshman. If Ball State can find a quarterback, the offense could shape up beautifully. But that's an enormous "if."

5. The new guy will have weapons

Wenning's favorite target, X receiver Willie Snead, declared for the NFL Draft a year early, and Nos. 3 and 4 targets Jamill Smith and tight end Zane Fakes each ran out of eligibility. These are reasons for concern, but it's difficult to get too worried about Ball State's skill position unit. The Cardinals still return Jordan Williams, who averaged nearly 10 yards per target over eight-plus targets per game. They get big-play threat KeVonn Mabon back after he missed most of 2013 with injury. They have an exciting three-star redshirt freshman tight end in Calvin Blank, and three interesting freshmen will vie for playing time.

Meanwhile, in the backfield, the nameless starting quarterback will line up with one of two promising backs -- either grinder Jahwan Edwards (minimal explosiveness, strong efficiency) or home-run hitter Horactio Banks. Ball State was awful in short-yardage situations last year, and that will need to improve to do the new QB a few favors, but there is a wealth of quality options in the skill position unit as a whole.

My biggest concern for the offense heading into last year was a dreadfully inexperienced offensive line. Granted, the lack of short-yardage success was indeed a concern, but for the most part the line held up. It kept defenders out of the backfield on both run and pass (and yes, the quick, short passing helped, too), and while BSU's is a pass-first offense, when the Cardinals tried to run on first down, they were pretty good at it.

In 2014, Ball State must replace its two most experienced linemen, including all-conference guard Jordan Hansel, but the 43 career starts it returns in 2014 is a much greater number than last year. And a lot of Ball State's more highly touted recruits in recent years are linemen. 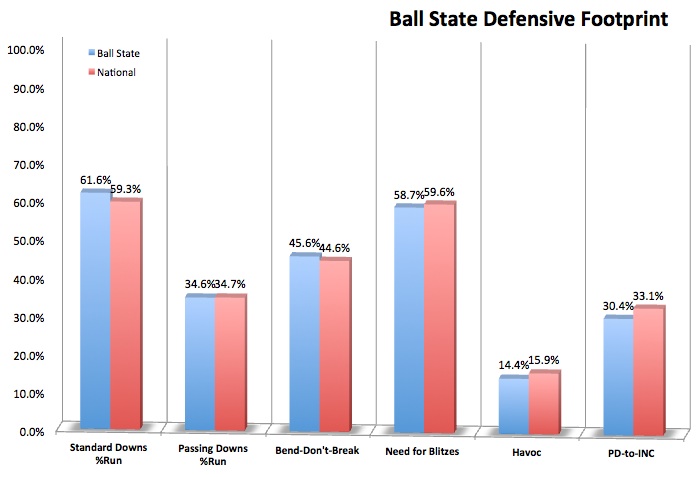 Kelly will be taking on a difficult task in 2014: making something of the Ball State defense. Now, by MAC standards, the Cardinals weren't bad in 2013, but by "potential top-50 team" standards, it was an anchor. Ball State allowed far too many big plays in the secondary, and the run defense wasn't good enough to make up for that.

Kelly inherits an experienced unit overall, but he'll have some work to do up front. The pass rush was a strength, but end Jonathan Newsome, tackle Nathan Ollie, and linebacker Kenneth Lee, the blitzer of choice, are all gone; they combined for 14.5 sacks and 26 tackles for loss in 2013. Ball State's 2014 line will be built around sturdy end Nick Miles, scrubs, and newcomers. If it fares as well as last year's line (or better) against the run, the back seven should have enough pieces to thrive.

Lee was a decent blitzer, and Jeffery Garrett made enough big plays to forgive some of the big plays he allowed. They could be missed, but they're the only losses for the Ball State back seven. Stalwart linebackers Ben Ingle and Zack Ryan are back, as are starting safeties Brian Jones (another aggressive piece, with 5.5 tackles for loss and six pass break-ups) and Dae'Shaun Hurley, who at least survived as a freshman. Senior nickel back Chris Calloway returns from injury, as does J.C. Wade, and senior corners Eric Patterson and Quintin Cooper are back, too.

Ball State has options, in other words. Experience is only a good thing if there's talent involved, and it does appear that there are enough disruptive stats among the returnees to suggest potential. We'll see if a new defensive coordinator is able to engineer a bit more improvement overall.

Jamill Smith was a decent receiver and an excellent return man. He will be missed in special teams, but the bones of this unit are still pretty strong. Scott Secor was good as both a place-kicker and a kickoffs man -- he didn't boot many touchbacks, but Ball State was 15th in opponents' kick return averages, which suggests that Secor was excellent at kicking them high and landing them around the 5. Meanwhile, Kyle Schmidt wasn't awful for a freshman punter. If a semi-competent return man emerges, Ball State should be adept at playing the field position game once again.

10. It all hinges on quarterback play

It does bear mentioning that Ball State appeared to have quite a bit of turnovers luck (plus-5.2 points per game) in 2013. The Cardinals somehow recovered 18 of 20 opponent fumbles; plus, opponents picked off only eight Ball State passes while breaking up 61. Typically, the INT-to-PBU ratio is closer to 1-to-4, not 1-to-8. So with worse breaks, BSU easily could have been in the 8-5 range.

That said, the efficiency of the offense was not lucky. The skill positions are still stocked, and the line is more experienced than last year, and if the secondary can stay healthy, the defense might be able to improve a bit more in 2014. The schedule cooperates -- and by that, I mean it features eight games against teams projected 101st or worse -- and the foundation of the program should ensure that the Cardinals reach a third straight bowl game.

Whether they compete for the MAC title or not, however, will depend on the quarterback. It's not a guarantee that Ball State actually has one ready to play well in 2014. You don't get very far doubting Pete Lembo, but BSU could take a step backwards this fall depending on what happens behind center.