We've had back-to-back redshirt freshman Heisman-winners. Even though that streak's unlikely to continue, it's clear college football fans should pay attention to the next group of seasoned rookies.

After Johnny Manziel and Jameis Winston took over college football in their first seasons of play, it seems appropriate that we take a look at some of the most talented players who redshirted in 2013.

The players below have long, long odds of matching those two, but these are still names you should know in 2014. While there isn't an obvious superstar in the making (like Winston), it's worth remembering Manziel was low-profile compared to most of these players at this point in his debut year.

Who's your pick for this year's top redshirt?

A handful of power schools could replace longtime starters with redshirt freshmen, but the new guys will have to battle for jobs. Could a surprise starter keep surprising all season long?

Ever since Max Browne committed to USC, talk has centered around exactly how soon the five-star quarterback could start for the Trojans. Browne was considered the top quarterback in the class of 2013, passing for 4,526 yards and 49 touchdowns as a senior at Skyline (Wash.) High School.

During the disastrous start to the 2013 season for USC, Trojan fans were often seen clamoring for Lane Kiffin to give the true freshman a chance, especially with Cody Kessler and Max Wittek struggling early on. The various USC coaches disagreed, and it worked out alright -- both Kessler and Wittek improved (especially Kessler), and USC was able to redshirt Browne as it went on a late-season run.

Wittek has since left (perhaps for Texas), further opening up the possibility for Browne to take Kessler's starting job.

It's not only the Steve Sarkisian era that has come to an end in Seattle -- the Keith Price era is over as well. Williams, a former four-star recruit who was considered the seventh-best pro-style quarterback in the 2013 class by the 247 Sports Composite, is in the race to replace the longtime starter.

The competition looks to be stiff, as he'll have to beat out Cyler Miles, former Elite 11 sophomore Jeff Lindquist, and blue-chip freshman K.J. Carta-Samuels for the job. Miles, the only one with in-game passing experience, is currently suspended, and only Williams and Lindquist are getting spring reps.

More from UW Dawg Pound on the Huskies' quarterback situation:

Troy Williams has the "it" factor as a QB. He's one of those guys that doesn't wow you with his size, or strength, or speed, but will amaze you as he effortlessly flips the ball 35 yards down field on a rope, or spins out of the pocket to buy more time or pick up the easy 15 yards on a scramble. The ball jumps out of his hand like he's throwing paper airplanes. It's tough to know how he'll do in picking up the offense. If he can, he's as legitimate a threat to simply take the starting job as anyone else on the roster.

After being kicked off the team at Georgia, Zach Mettenberger ended up a solid JuCo pickup for the Tigers, starting for two years and throwing 22 touchdown passes last season.

Now, the Tigers are looking for a replacement, and the blue-chipper Rettig is one of the names in the "wide-open competition." Considered a top-10 pro-style quarterback in the class of 2013, Rettig was snatched by the Tigers out of California (quite the achievement by LSU recruiters), where he threw 40 touchdowns as a high school senior. The younger brother of former Boston College starter Chase Rettig will have to beat fellow former four-stars Anthony Jennings and Brandon Harris for the job.

Stephen Morris is gone for the NFL after starting parts of four different seasons for the Hurricanes (and all of the last two), helping revive the once-dominating program to a respectable level. Olsen, the brother of former Hurricanes star Greg Olsen, was considered the No. 3 prospect in New Jersey, and could replace Morris immediately.

Rising senior Ryan Williams, who played in four games last season, is seen as the favorite and is working with the first-team in spring practice, but Olsen is expected to give him a run for the job. 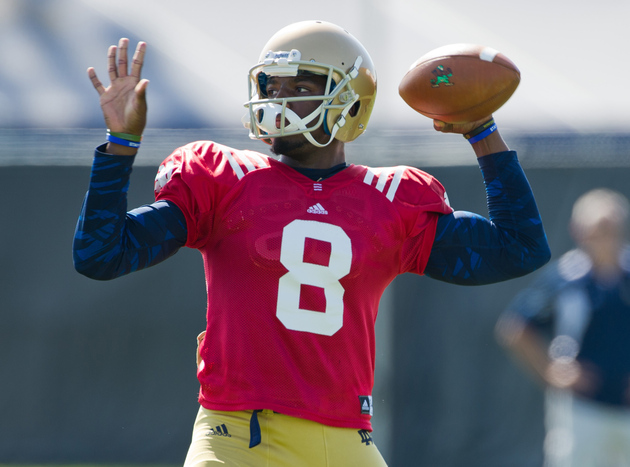 A four-star recruit coming out of high school, Zaire has had some major hype follow him at every step in South Bend. Some Irish fans even wanted him to start as a true freshman last year, instead of senior Tommy Rees.

Zaire now has a different former starter to contend with -- Everett Golson, who sat out the 2013 season due to academic suspension. The two will be competing for the starting job during camp, but Golson is expected to be the favorite.

Greenlee was a coup of sorts for the Bulldogs, as they beat out Mississippi State for the Elite 11 quarterback's services. Greenlee threw for a combined 44 touchdowns over his last two years at Lincoln (Calif.) High School.

He's one of the names in the mix to compete for the starting job with potential first-round pick Derek Carr gone, alongside Brian Burrell and Myles Carr:

[Greenlee] arrived on campus with greater prestige than his competitors. It could be that the staff is eager to give "their" guy, a three-star recruit in 2013, every opportunity to win the job. Until the snaps are distributed, though, we can only speculate.

And six other names to know

Star running back Bishop Sankey declared for the NFL draft, giving the Huskies another mainstay to replace in 2014. Coleman is a similar back to Sankey -- a power runner with good size -- and could be next in the line of great Husky running backs.

Lavon Coleman is the X-factor. With the depth at the position last year Sark had the luxury of redshirting him, and yet he still very nearly pushed his way on to the field - the coaches raved about him. He's nearly as big as Washington, and while he doesn't have his speed, he's a terrific bulldog of a runner, and when the dust clears there's a decent chance he could win the job.

Coleman will have to beat out seniors Jesse Callier and Deontae Cooper as well as sophomores Dwayne Washington and Ryan McDaniel for the position. The winner will run in the Chris Petersen offense that helped put Doug Martin in the NFL.

A high three-star prospect out of Lompoc (Calif.) High School, Coleman ran for over 2,000 yards as a junior and averaged nearly seven yards per carry as a senior.

Like Thomas, Seals-Jones is another player who was injured early on in his first year on campus after showing a brief glimpse of something special. Coming out of Sealy (Texas) High School in 2013, Seals-Jones was considered one of the top players in the state of Texas, and his high-profile recruitment was documented in a chapter of a book released last year.

He made an instant impact on the field, catching three passes for 84 yards in the Aggies' opener against Rice, but hurt his knee after a 71-yard touchdown reception in the game. The team is still treating his injury with caution.

Texas A&M lost both Johnny Manziel and top target Mike Evans to the NFL, and Seals-Jones is favored to take over for the latter.

James is one of the most highly touted recruits of this group, rated as the top guard in the nation when coming out of high school. He can play tackle, guard or center, and is listed at a massive 6'5 and 320 pounds. The Under Armour All-American is at his best in the run game, says Burnt Orange Nation.

As a college player, he might be the biggest mystery on this list, but his talent as a prospect makes him worth monitoring. He could play guard or center on a shuffling offensive line, and could win one of the jobs vacated by departing senior guards Trey Hopkins and Mason Walters. If he does win a spot at guard (or even tackle), he'll play under Joe Wickline, a long-respected offensive line coach who's partially in charge of the Longhorns' offense.

James was an early commitment for the Longhorns in 2012, and praise for the interior lineman was high from the beginning.

As for what James will bring to the table at Texas, there's been some talk emerging from the staff that Searels and company believe he's good enough to contribute for the 'Horns right now, as a prepster not even ready yet for his senior year in high school. That may be a little bit of hyperbole, but there's no question that James is as good as it gets as an interior line prospect.

Brantley's recruitment was a chaotic one -- he committed, then decommitted, then committed again three days later -- and he redshirted his first year on campus in order to get in better shape. A former four-star recruit, Brantley chose the Gators over offers from Florida State and Alabama, among others, then spent 2013 as a scout team MVP.

Leon Orr and Darious Cummings are expected to win the starting tackle jobs, but Brantley should play a major role as a reserve.

On defense, Jay-nard Bostwick seems like a lock to contribute at defensive tackle, after being mentioned repeatedly down the stretch by Muschamp in 2013. And Caleb Brantley and Antonio Riles should, too, though they'll be pushed by the formidable recruits coming in behind them. Jordan Sherit, Matt Rolin, Marcell Harris, and Nick Washington are the only other redshirt defenders, and of them, I think Washington, who might well have played in 2013 if not for his injury, and Rolin, who could compete for a job at either outside linebacker position, are the most likely to make an impact.

Going out on a limb, I think we see Bailey, Johnson, Brantley, and Washington make significant impacts. 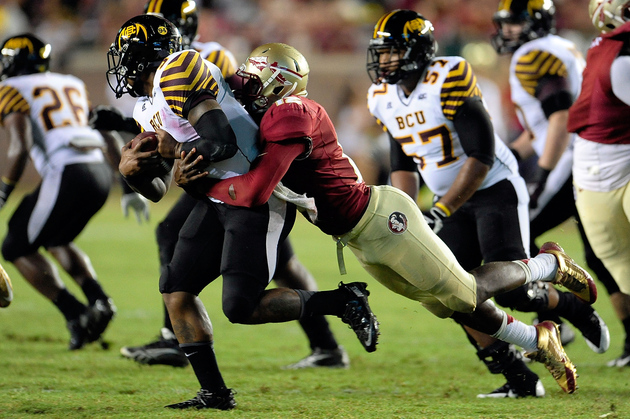 Thomas was a five-star prospect in the class of 2013, and was considered a top-10 national prospect. He underwent shoulder surgery after four games in his first season, and should receive a medical redshirt due to the injury. The national champion Seminoles lost a good amount of parts both to graduation and the NFL Draft after their undefeated 2013 campaign, and Thomas could be one of the candidates to replace Telvin Smith at the WILL position.

Unlike many of the other players on this list, fans have had a chance to see Thomas on the collegiate level -- he recorded four tackles, with two for a loss, and one sack in the four games he played last year.

Matthew Thomas looks huge -- must have put on 20 pounds of muscle since the last time he was on the field. His movement -- forward, lateral, etc. -- is as good as ever, even with the obvious weight gain. I'm beyond excited to see him once spring practice starts towards the end of March and on into the season.

Alexander received a redshirt after suffering a groin injury during his first season, and could end up being a four-year starter with the Tigers. He injured his groin in fall camp last year, thereby missing the season, but head coach Dabo Swinney is high on the former top-five cornerback recruit:

Dabo: "Mackensie Alexander, man. He is special. He looks tremendous. It's been really good to see him bouncing around w/o being hindered."

Both starting corner positions are open for Clemson, with Darius Robinson graduating and Bashaud Breeland leaving early for the NFL Draft. High expectations surround Alexander, and he is expected to grab one of those starting jobs this year.