The big 2014 Toledo football preview: Do you prefer depth or star power?

Matt Campbell's third Toledo squad has as much depth and potential as any in the conference, but will the loss of quite a few stars prevent the steady, consistent Rockets from ending a decade-long run without a conference title?

Share All sharing options for: The big 2014 Toledo football preview: Do you prefer depth or star power?

... Toledo has either stabilized or slipped in the last two years.

When Tim Beckman took over in Toledo in 2009, one of the MAC's most consistently successful programs had hit a bit of a lull. The Rockets had gone 45-18 in the first five years of the Tom Amstutz era (Amstutz succeeded Gary Pinkel in 2001), but they slipped dramatically thereafter, going 5-7, 5-7, and 3-9. It was their first three-year streak of losing seasons since 1976-78.

Beckman recruited well and installed an exciting offense, and Toledo improved in all three years: 5-7 and 95th in the F/+ rankings in 2009, then 8-5 and 90th in 2010, then 9-4 and 38th in 2011. The '11 Rockets were an awesome team, suffering losses only to Ohio State (by five in Columbus), Boise State, Syracuse (via controversy), and Northern Illinois (via MACtion). They were basically 10 points and an awful call away from the MAC title game and a potential 13-1 season.

Beckman left for Illinois in 2012, and Toledo replaced him with offensive wunderkind Matt Campbell. Campbell was Mount Union's offensive coordinator at 25 and Beckman's OC at 29, and he coached his first game as head man two months before his 33rd birthday.

And depending on your point of view, he has either successfully stabilized the program, or he has overseen a drop-off. Toledo is 16-9 in his two years; the Rockets ranked 54th in 2012 and 62nd in 2013. These are the second- and third-best marks for the school in the last eight seasons, but they're both worse than 2011.

No matter how you choose to spin it, recruiting has still gone pretty well, and Toledo returns a huge portion of last year's two-deep. Toledo isn't likely to drop from the top half of the MAC any time soon.

Once again, it's a matter of spin. Taken as a whole, Toledo returns a ton from its 2013 squad. The Rockets return backs who combined for 1,500 rushing yards, wideouts who combined for 1,200 receiving yards, five offensive linemen with starting experience (from an awesome line, by the way), seven front-seven defenders who logged at least five tackles for loss in 2013, 10 of the top 11 in the secondary, and an outstanding place-kicker. That's great!

I tend to favor depth over star power, and I think this team should benefit from the wealth of experienced options in nearly every unit. But when you lose almost every known star, you are never fully assured of replacing them properly.

Because of the final chapter, the book on 2013 Toledo is one of relative disappointment. A 7-3 start, with trip-ups only at Ball State and in two SEC road games, was encouraging, and the Rockets won five games in a row to move to the precipice of a MAC title breakthrough. As (mostly) consistent as the Rockets have been through the years, they haven't won the MAC since 2004, and it looked like 2013 could be the year. But on a Wednesday Night MACtion battle at home, they faded late against a smoking hot Northern Illinois team. The next week, they suffered a bit of a hangover in losing to upstart Akron.

Because of the poor finish, Toledo missed a bowl for the first time in four years and put a damper on what had been a strong run.

After playing average ball through mid-October, the Rockets had found a new level of offense down the stretch. They won at eventual MAC champion Bowling Green and averaged nearly eight yards per play against a decent Buffalo defense. They even led Northern Illinois midway through the third quarter. But the last 5.5 quarters of the season were unkind. 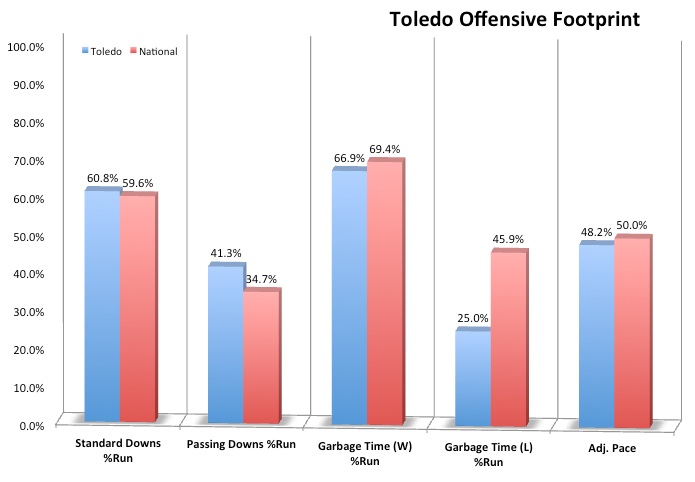 4. No guarantees behind center

Terrance Owens didn't have the greatest senior season. His per-pass-attempt average fell from 7.1 to 6.8. His rush attempts were cut in half and were quite a bit less effective. He threw four interceptions in early losses to Florida and Missouri, and he was injured against Eastern Washington. And he threw another three interceptions in the late losses to NIU and Akron.

This wasn't the greatest way to go out, but Owens was still a stellar starter for portions of the last four seasons. He took down Austin Dantin after a multi-year platoon to win the starting job outright, and it of course bears mentioning that Toledo won 33 games in his time.

Stars leave, however, and while Owens' production was in no way irreplaceable, you still have to find a capable replacement. Logan Woodside filled in reasonably well for Owens against EWU, and Michael Julian was a high-two-star recruit in high school. Alabama transfer Phillip Ely is also eligible after sitting out the 2013 season. Toledo didn't sign a signal-caller in its 2014 recruiting class, so these three and walk-on Ryan Casey are the only quarterbacks on the roster.

This might be just fine, but the margin for error is small, and if there's an injury, things get pretty dicey pretty quickly.

The quarterback situation is at least a little bit uncertain, but we know that whoever wins the job will have some exciting options at the skill positions. David Fluellen and Bernard Reedy are indeed gone, but basically everybody else returns, including a trio of exciting sophomore running backs (particularly super-efficient Kareem Hunt), big possession receiver Alonzo Russell, and a number of former three-star recruits. Toledo has recruited well here (no surprise, given the general effectiveness and draw of the offense), and even if there's a minor step backwards in 2015, the Rockets are set up well here for years to come.

The one thing Toledo needs a bit more of, however, is big plays. The Rockets were both efficient (37th in Success Rate+) and good at catching up when they fell behind schedule (31st in Passing Downs S&P+), but their big-play ability was marginal (78th in IsoPPP+, which measures the magnitude of the successful plays). Hunt and Russell are more efficient than explosive, so it will be interesting to see if (and if so, with whom) Toledo is able to improve in this regard. Signs point to no.

6. The line should be awesome

One thing we know: the line shouldn't be a problem. Toledo was one of only six teams to place in the top 20 of both Adj. Line Yards and Adj. Sack Rates; obviously both of these measures evaluate more than simply line play, but when you rank highly in both, that's a good sign that either your line is great or your scheme and tactics are solid. Or both.

Zac Kerin is gone, but another three-year starter (and all-conference performer) returns in guard Greg Mancz. Toledo returns 100 career starts overall on the offensive line and will start 2014 with one of the most experienced units in the country. Depth might be a concern -- after the top five, it's nothing but sophomores and redshirt freshmen -- but the starters, all seniors, are outstanding. 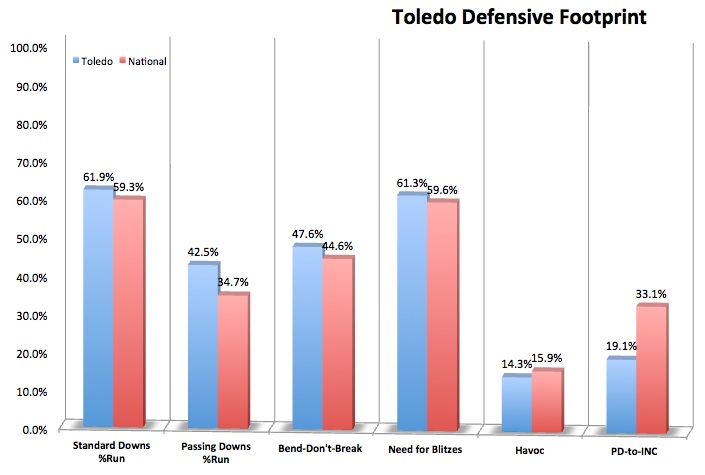 Toledo had the No. 1 pass rush in the country according to Adj. Sack Rate. The Rockets recorded 36 sacks overall and had at least two in 11 of 12 games. They brought Missouri quarterbacks down four times, then recorded 12 sacks against Navy and Bowling Green. They attacked from all sorts of directions -- two ends had at least 4.5 sacks, two tackles had at least 2.0, and two linebackers had at least 4.0 -- and their success in this regard gave the defense an exciting identity.

It also made them a bit bipolar. Against the pass, Toledo was all-or-nothing, logging tons of sacks and giving up far too many big plays. Against the run, the Rockets bent a decent amount but cleaned up messes and almost completely minimized big plays.

Despite the great sack rates, Toledo fit a bend-don't-break profile on passing downs (poor success rates, minimal big plays). This is a combination you don't see very often, and I'm not sure what it says about defensive coordinator Tom Matukewicz's overall intentions. Does he want to play a bend-don't-break zone, and he just happened to have some great pass rushers last year? Does he want to attack, attack, attack, but his secondary wasn't talented enough to be aggressive?

With the loss of ends Jayrone Elliott and Christian Smith and the return of virtually everybody in the secondary, we might start to get an answer.

8. Wanted: A few more plays (or players) in the secondary

Either by design or talent level, Toledo's secondary was terribly passive in 2013. The Rockets defensed (intercepted or broke up) just 27 passes in 2013, tied for the worst in the country with Eastern Michigan and Army. And 12 of the 27 came from members of the front seven. The secondary defensed just 15 passes, far too low considering the strength of the pass rush (and the harried nature of opposing quarterbacks).

Three of four starters return, as does the entire second and third string. There are quite a few former star recruits here (five former three- or four-star recruits are listed above, plus five high-two-stars), and while injuries and youth did play small roles in the secondary's struggles, this unit simply needs to produce more. At the very least, experience certainly won't be an excuse in 2014.

Jeremiah Detmer entered the Eastern Washington game with a streak of 22 straight made field goals. He missed a 35-yarder against EWU (which left him six short of the longest streak in FBS history), then didn't miss again. He assures that Toledo gets points out of almost any scoring opportunity, and he's a weapon on kickoffs, too, booting half of his 76 kickoffs for touchbacks. He's the leader of what should still be a decent special teams unit; the loss of Bernard Reedy is challenging, but Detmer alone makes the Rockets viable here.

10. Are you an optimist or pessimist?

An optimist sees perhaps the best mid-major offensive line in the country, three exciting, young running backs, a wealth of former star recruits at receiver and defensive back, an automatic place-kicker, and the makings of another strong pass rush.

A pessimist sees potential depth issues at quarterback, a lack of guaranteed star power in the skill positions, a pass rush that lost its best pass rusher, and a feckless secondary.

What do I see? A team with a large potential variance in outcomes. I lean more toward optimism here, and I will absolutely have Toledo in the MAC's crowded top tier when I rank teams on Friday. But I do worry a bit about the things on the pessimist's list, and I don't know if the Rockets are as much of a sure thing as Bowling Green and (perhaps) Ball State.

In all, this program is as well built for the long-term as any in the MAC. The coach is young and exciting (and hasn't proven enough to generate a ton of major-conference interest yet), the recruiting has been as steady and strong as anybody's in the conference (whereas WMU just signed the best recruiting class in MAC history, Toledo has found consistent success and still has the overall advantage in this category), and the tactics are strong, at least on offense.

There's a lot to like here, but I'm not sure this is the year the decade-long run without a conference title ends.