UAB's 2013 season was an outright disaster, fraught with horrific attendance and a defense patched together with duct tape. With health, depth, and a new, local coach, the Blazers might find a sliver of hope in 2014.

Share All sharing options for: The big 2014 UAB football preview: Bill Clark takes on the impossible

Eight wins in three years, and an average of 3.9 per year since 2004. Worst home attendance in nearly two decades. No momentum for a new stadium and a move out of cavernous, outdated Legion Field. An adversarial relationship between students and trustees. Stiff (and well-coached) competition from a new up-and-comer in state.

No program is completely hopeless; any team is just one hire away from some level of success. But some jobs are a whole lot harder than others, and among the FBS ranks, few jobs are more difficult than UAB.

It has become a bit of a résumé killer in recent years. Neil Callaway coached the Blazers from 2007-11 and was fired; his next job was as WKU's offensive line coach. After two years on the job, his successor, Garrick McGee, bailed to become Louisville's offensive coordinator, avoiding his résumé falling into disrepair.

Clark hasn't been a college head coach for very long, but if it takes an Alabama guy to win at UAB, the 45-year-old Clark is as Alabama as they come.

Clark is not wasting time. Sixty-four percent of his first UAB recruiting class comes from the JUCO ranks. He inherited a situation in need of an immediate, drastic talent upgrade, and he attempted to deliver just that.

Recruiting a large number of JUCO transfers is risky; if they don't work out, they prevent you from developing five-year depth. Sometimes new hires in tough jobs take the long road, committing to high school recruits and sacrificing a couple of years of poor play for success in Years 3 through 5. (Example: Doug Martin at NMSU.) Others are willing to attempt a few shortcuts. (Example: Paul Petrino at Idaho.)

Risk or not, it's not hard to see why Clark felt the need to go this route. UAB was mostly hopeless at the start of Garrick McGee's second season, and the Blazers became completely hopeless amid a crushing wave of defensive injuries and attrition.

The offense improved, but not enough to keep up with a dilapidated defense, and after wins over Northwestern State and hapless FIU, UAB's season ended with six straight losses. Average (real) score of the last four: Opponent 55, UAB 22.

The season-ender might have been the most depressing Saturday in program history; in front of just 6,383 fans in a stadium that seats 71,000, UAB lost by 35 points to a Southern Miss team that hadn't won in almost two full calendar years. The Blazers held a 21-13 halftime lead, then got outscored by a stunning 49-6 margin in the second half. A month or so later, McGee left for Louisville. 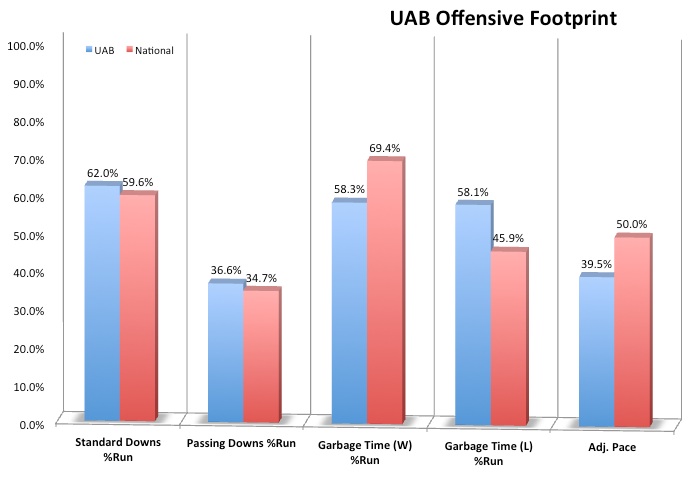 We obviously don't know for sure what Clark and offensive coordinator Bryant Vincent will be attempting to accomplish offensively in 2014. UAB returns a potential wealth of receiving talent, and in 2013 Vincent was the quarterbacks coach for a rather well-balanced South Alabama offense.

We do know this, however: in 2013, Clark's Jacksonville State ran the ball at will. Not including sacks, the Gamecocks attempted 49 rushes (for 251 yards) per game. A foursome of running backs averaged 168 rushing yards per game, and JSU was able to keep moving forward despite a revolving door at quarterback. JSU was able to raise the tempo at times and could pass when it needed to, but the 'Cocks wanted to run the ball down your throat and occasionally did so.

Will UAB be able to do the same? And if Clark's preferred style requires a wealth of running backs, exactly who will end up getting carries?

UAB had a stellar running back in Darrin Reaves last year, but he received a decent NFL Draft evaluation and departed Birmingham after his junior season. Big sophomore Jordan Howard actually surpassed Reaves' averages with a smaller load; one has to imagine that he will be heavily featured in Clark's first season.

After that, the answers are less certain. Bashr Coles posted averages even better than Howard's when he was a sophomore in 2012, but he's coming off of a knee injury. D.J. Vinson is known as a strong athlete but hasn't been healthy and/or eligible in quite a while. Alabama A&M transfer Ja'Won Arrington is an option, but the number of proven, healthy bodies is limited.

Of course, before you figure out the running back situation, you have to figure out who's taking snaps, and there are even fewer known quantities at the quarterback position. You've got a pair of former junior college transfers (Cody Clements, Myles McKee) fighting it out with a redshirt freshman coming off of shoulder surgery (Jeremiah Briscoe). Walk-on Mike Miller could enter the equation at some point, and incoming freshman Taz Wilson will have a chance to make an impression in the fall. Total combined passes these players threw last year for UAB: zero.

At both of these positions, there are a lot of potential answers and no guarantees. But if the backfield situation is stable, the Blazers could take advantage of some strong options lined up wide. Jamarcus Nelson was one of the nation's better big-play guys in 2013; as you notice from the stats above, big plays tended to be quite big (and too rare) for UAB last fall, and he was the primary source of them. Arkansas transfer Maudrecus Humphrey is eligible, and the Blazers return a wealth of players who averaged between about 6.5 and 8.0 yards per target last year. If one or two are able to step forward (perhaps former three-star recruit Nyiakki Height?), the position will easily be a strength for this team.

6. No excuses for the line

Compared to the rest of the offensive stats, UAB's line stats were rather solid, at least in terms of run blocking. The Blazers weren't great in short-yardage situations, but Reaves was able to find quite a few open-field opportunities -- due to either his own talent or the line's blocking (likely both) -- and opponents did not make a ton of stops behind the line.

UAB returns five of seven players with starting experience up front (50 career starts, a decent total), and the line was a severe focus for Clark's first recruiting class. Clark signed a whopping five junior college transfers to compete up front; of the 15 players listed above, then, 10 are juniors, and one is a senior.

Even if Reaves was responsible for making these line stats look better than the line deserved, there's no excuse for UAB's line to struggle too much. It should be a strength, even if we are just speaking relatively. 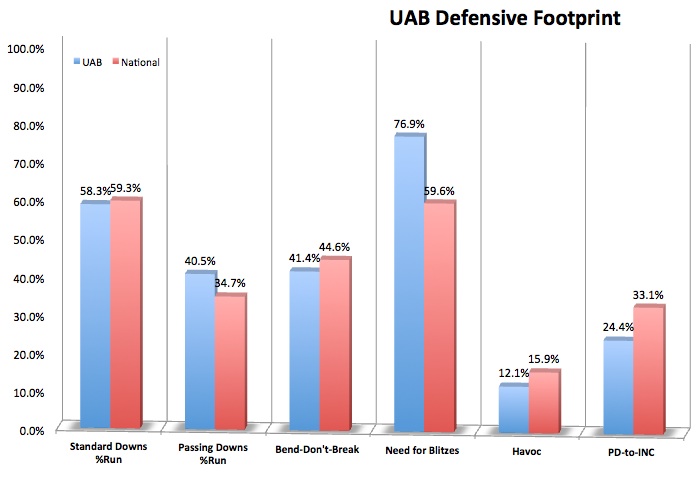 7. The D never had a chance

In all, UAB's offense took a solid step forward in 2013, from 95th in Off. F/+ to 78th. Garrick McGee is an offensive coach at heart, so this isn't incredibly surprising. The problem for UAB in McGee's second season, however, was that the defense got absolutely obliterated by injury.

Go ahead and look at the players listed below; look at the GP (games played) column. Only six UAB defenders played in all 12 games. Six! Former end Trey Grissett (now a JACK linebacker) was the only lineman to make it through the season unscathed. It got so bad that offensive lineman Uneik Crumbley was starting at defensive tackle by the end of the year. And things might have been even worse in the secondary, where at least four defensive backs (three safeties) missed significant time.

With no continuity you've got almost no chance, and UAB's duct-tape defense had no consistent strengths. The Blazers ranked 119th or worse in just about every major category listed above; they were 123rd (out of 126) in Rushing and Passing S&P+. They were 124th or worse in three of four quarters. They were 125th on standard downs. They were 125th in the redzone. A team like UAB is going to struggle to build quality depth anyway; when iffy depth meets this level of injury and attrition, there's just no hope.

With health comes at least a little bit of hope, however. Diaheem Watkins and Chris Rabb are decent pass rushers (they're the only ones, of course), Jake Ganus is a solid mess-cleaner at linebacker, and lord knows the secondary goes three-deep with experience. Clark signed two junior college transfers on the line, one at linebacker, and five in the defensive backfield.

As I end up saying a lot when previewing less successful teams, depth only matters if talent is involved. But UAB currently has depth and experience it could only dream about a year ago. The options are there, and if at least a few of them work out, the defense could improve significantly. (Of course, improving "significantly" could just mean fielding a top-110 defense ...)

8. The secondary will come around first

Calvin Jones returns after a medical redshirt. Jordan Petty made plays both near to and far from the line of scrimmage as a freshman. Nick Jackson and Greg Maclin were also thrown into the deep end as frosh. T.J. McCollum was the star of the 2013 recruiting class. At least one of the junior college transfers, Desman Carter, fills a spot on the depth chart. There is experience and at least a little bit of proven play-making ability at the safety position.

Meanwhile, at least three cornerbacks are worth watching; Lamarcus Farmer made four stops behind the line of scrimmage in seven games, and Kelton Brackett and Jimmy Jean combined to either pick off or break up 14 passes in 2013.

Between experienced box-score fillers, sophomores who were once overwhelmed freshmen, and junior college transfers, there is reason to believe that the UAB secondary could be legitimately solid. The unit's success will obviously depend in part on the front seven -- both the run defense and pass rush need to improve significantly -- but if the defense does turn around quite a bit in 2014, the secondary will likely be the primary reason.

Between return touchdowns, nearly automatic place-kicking inside 40 yards, touchbacks on kickoffs, and a punter averaging more than 43 yards per kick, special teams was a bright spot for UAB in 2013. It put the Blazers in position to win the field position battle with even a semi-competent defense, and it could be just as good, or better, this fall. Everybody of note is back.

It's easy to forget thanks to the debacle of his second year, but UAB made quite a bit of progress in McGee's first season, improving from 108th to 91st in the F/+ rankings. With good health, it is at least reasonably conceivable that the Blazers could bounce back to the top-100 range, and if they do, they could start the season quite well in 2014.

Three of their first four games are at home against teams projected 111th or worse, and a 3-1 start would be huge for a program desperate for momentum. First of all, UAB hasn't won more than three games in a season since 2010, so winning three in September would be an incredible sign of progress. Beyond that, however, it would simply give fans a reason to show up and care again.

UAB is in a tough situation for all the reasons listed at the top of this piece. But in Bill Clark, the program made a solid, local hire, and this roster has depth last year's simply didn't have. If UAB can establish the run on offense and simply field 11 healthy bodies on defense, the Blazers could win four or five games. With proof of hope, perhaps goals like building a new, smaller stadium near campus become more attainable.

If you win games, everything gets easier, and in 2014 UAB has an opportunity to win a couple more games than it has in quite a while.