Head coach Sean Kugler's first year at UTEP was doomed by poor depth, experience, size, and health. But hey, other than that, it went pretty well!

1. There are worse things than being stuck in a rut

It's a concept I bring up a few times each year in my preview series: Glen Mason Territory. A coach experiences greater-than-usual success at a school and hits a bit of a plateau. The program cruises along at a higher level than normal but doesn't raise its level again, and impatience builds.

Mike Price began his UTEP career in 2004 and immediately ripped off back-to-back eight-win seasons. The Miners spent parts of both 2004 and 2005 ranked in the AP top 25 and reached as many bowls in that span (two) as they had from 1968 to 2003. Over the next six seasons, UTEP sank, but Price continued to win at a higher level than his predecessors. UTEP reached another bowl in 2010, but from 2010-12 the Miners basically put the same mediocre product on the field, and Price retired after a 3-9 campaign in 2012.

The namesake of Glen Mason Territory was fired from Minnesota after seasons of 7-5, 7-5, and 6-7. The year after Mason left, the Gophers went 1-11. Either because a new coach inherits a program with crumbling infrastructure, or because it takes a hell of a coaching job just to achieve at a mediocre level at a certain program, a team can experience a significant drop-off when it finally gets rid of its Glen Mason.

This is a long way of saying that in its first year without Mike Price, UTEP won the same numbers of games as it had the year before Price arrived in El Paso: two. Sean Kugler was able to patch together a decent offense until his quarterback got hurt, but a paper-thin defense became a non-existent one over time, and UTEP played like perhaps the worst team in the country over the final month or so of the season.

Because of injuries, however, Kugler gets a mulligan. In 2014, he has a chance to prove that it doesn't take a superhuman coaching effort simply to reach 5-7 on Glory Road.

Texas A&M transfer Jameill Showers didn't light the world on fire at UTEP, but he was certainly a competent quarterback. He averaged almost six yards per pass attempt with sketchy protection, and he averaged 6.1 yards per carry not including sacks. With Showers behind center, UTEP averaged at least 5.4 yards per play in five of its first seven games and scored at least 20 points five times. That's not amazing, but it's not atrocious.

But then Showers was lost to a shoulder injury, and bad things happened. Replacement Blaire Sullivan threw some interceptions and was demoted. A pair of freshmen took their turns at the wheel with middling results. An awful defense improved a hair down the stretch, but it wasn't enough to offset drastic offensive regression.

This wasn't a fun season. Between injuries and the attrition often associated with a head coach's first season (and an attempted culture change), UTEP was too thin, too inexperienced, and too small. We'll see how much can change in a single offseason. 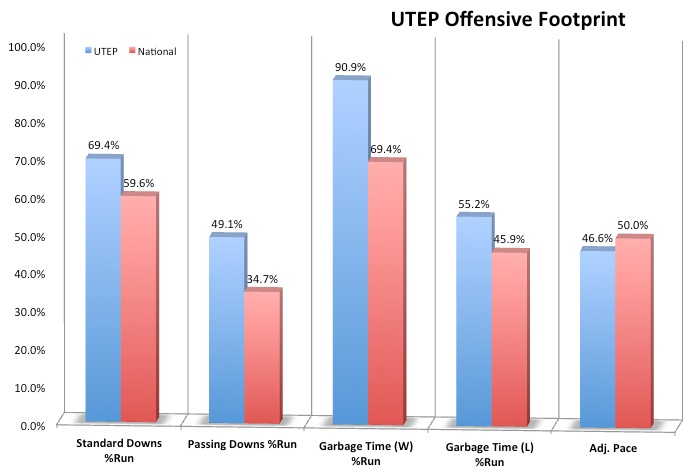 3. A potentially solid attack with Showers

Again, Showers wasn't exactly performing at an all-conference level when he went down. At 11.8 yards per completion, you should be completing about 65 percent of your passes, not 57. And you definitely shouldn't be taking sacks on seven percent of your pass attempts. So Showers certainly still has some improvement he can make.

Still, it says something that UTEP's performance regressed by more than five adjusted points after his injury, and it doesn't only say that his backups weren't ready. With a year of experience within Kugler's and offensive coordinator Patrick Higgins' system, and with a wealth of weapons next to him in the backfield, he should be able to post pretty good numbers this fall.

4. Plenty of options at RB

UTEP wanted to run as much as possible in 2013, and it's not hard to see why. Patrick Higgins has experience in pass-happy offenses, but Showers is a relatively mobile quarterback (he averaged about seven non-sack carries per game), and after Showers went down, there was perhaps an understandable urge to protect young, error-prone quarterbacks with a heavy dose of rushing.

Beyond that, however, there's another reason to want to run the ball: the Miners have pretty decent running backs.

The backfield is crowded. Granted, the backs couldn't stay healthy in 2013 (who could on this team?), but Nathan Jeffery has shown solid explosiveness in the open field (when he can get there), and Aaron Jones was quite efficient for a freshman. Autrey Golden is a former star recruit and a great return man, and Darrin Laufasa showed strong potential in minimal opportunities. They could be joined by Laufasa's brother Jeremiah, a Washington State transfer, if his immediate-play waiver is granted. Plus, two of 2014's more highly touted recruits (David Hamm and Treyvon Hughes) are running backs. This is easily the deepest position on the team.

One should expect a heavy dose of running again this fall, not only because of the depth of the running back position, but because of the lack thereof at wide receiver. Star receiver Jordan Leslie used a graduate transfer and will be playing for BYU this year; his per-target averages weren't amazing and could honestly be matched by big senior Ian Hamilton, but it's a bit of a mystery figuring out who might be capable of then matching both Hamilton's and Devin Patterson's production. After Hamilton, the leading returning wideout, Malcolm Trail, had three catches last year. Tight end Eric Tomlinson's efficiency will help, but this is a shaky unit.

One fun tidbit: receiver Brandon Moss appears to be turning some heads this spring. He caught zero passes as a freshman ... but did punt five times.

5. A line as good as its backs

Obviously line stats are only partially reflective of the line itself; if your running back dances too much in the backfield, or if he doesn't properly follow blocks downfield, it's going to reflect poorly in the line stats above. But the fact that UTEP's Stuff Rate (stops in the backfield) was great and its Opportunity Rate (percentage of runs that gain at least five yards) was awful suggests that UTEP's line was competent but couldn't get much of a push. If you look back at the rushing stats above, you see that Nathan Jeffery's Opportunity Rate was half of Aaron Jones', suggesting he perhaps dances a bit too much, but UTEP's focus on weight gain in the offseason certainly gives merit to the "not much of a push" theory.

Most of the offensive linemen above have put on 10 pounds or more in the offseason. Starting guards Jerel Watkins and Kyle Brown, neither of whom are 300-pounders, have moved outside to replace last year's starting tackles and make way for perhaps bigger guards like redshirt freshmen Derek Elmendorff or Will Hernandez in the starting lineup. Aaron Jones appears to be a nice follower of blocks (with minimal explosiveness), but giving his blockers a little bit more heft can't hurt. 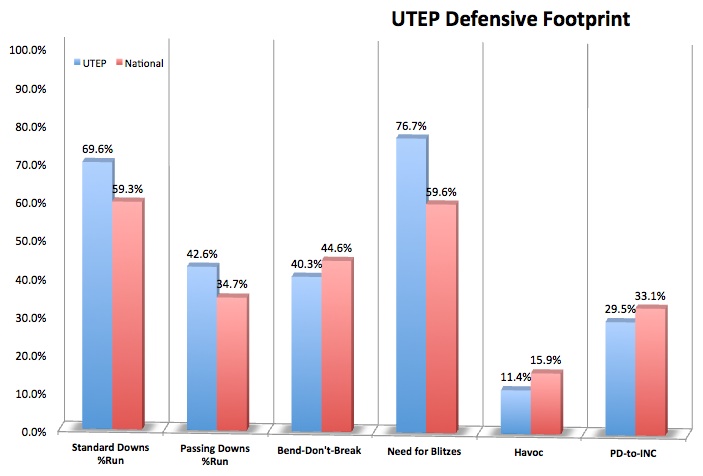 Really, the UTEP defense was doomed from the start. Kugler's first choice for defensive coordinator, Jeff Choate, installed a 3-4 defense last spring, then left for a special teams job with Florida. Kugler hired Scott Stoker over the summer, and Stoker installed a 4-2-5.

The 4-2-5 puts a lot of demands on its personnel. First, you need a big line that can hold up to run blocking without help. Second, you need a wealth of interesting safeties. UTEP had neither of these things. And if you don't have the right personnel for the 4-2-5, you end up with a defense that doesn't have enough meat to avoid getting pushed around and doesn't have enough speed to make up the difference.

Yes, any scheme has its natural assets and liabilities, but it seems that a lot of defenses struggle mightily when switching to this permanent nickel look. UTEP was no different. Safety Richard Spencer was injured, then suspended. Wesley Miller was healthy for only four games. None -- none! -- of the top 12 tacklers played in all 12 games. UTEP didn't have the personnel to properly pull off a 6-3-2 defense, much less a 4-2-5.

When UTEP was able to leverage opponents into passing downs, the Miners put together a decent pass rush, ranking 40th in Passing Downs Sack Rate. Of course, they still allowed too many big plays for that to matter (126th, dead last, in Passing Downs PPP+), and they couldn't really force any passing downs anyway.

UTEP was bereft of talent, experience, or heft in 2013; in 2014, the Miners are at least doing something about the heft. As with the offensive line, most of the above returnees have put on 10 pounds, and some have put on 20. This isn't guaranteed to help, and the four returning defensive tackles still average a listed weight of just 284 pounds, but it's a start. And if 300-pound JUCO transfer Alex Villareal is ready to play at an FBS level out of the gates, that's even better.

This isn't going to become a good line overnight, but Robertson-Harris certainly looks the part, and despite the loss of three of the top five tacklers, this unit isn't going to be any worse.

This was just a disaster in every possible way. But with experience comes a little bit of hope. Devin Cockrell and Dashone Smith, the aforementioned freshman leaders, are sophomores now, and senior safety Jameel Erving has shown some play-making potential (four tackles for loss, three pass break-ups) amid the breakdowns. Plus, this personnel has now played in this system. It's not new anymore. There's no reason to think this defense will improve dramatically, but it should certainly take at least one step forward in 2014.

UTEP's defense was awful early, and the offense was awful late, and both units squandered a ready-made field position advantage in the form of quality kicking and returns. Punter Mike Ruggles kicked high, kicker Jay Mattox kicked long, and Autrey Golden was one of the best kick returners in the country; they all return, as well. Granted, this unit as a whole was dragged down by Mattox's scatter-shot place-kicking (5-for-10 under 40 yards isn't going to cut it), but he was a freshman.

10. It probably won't get worse

Freshmen become sophomores, and injuries usually heal. That's just about the best news one can deliver for UTEP in 2014. There's no massive talent infusion, but after fighting through experience, depth, and health issues in 2013, the Miners will be more experienced, deeper, and (probably) healthier this fall. They are bigger in the trenches, even deeper at running back, and more experienced in the secondary, and last year's new offensive and defensive systems are no longer new.

Granted, the schedule isn't particularly forgiving, featuring just four teams projected worse than 98th, but improvement on the field should be reflected at least a little bit in the win-loss record.