Despite coaching turmoil, and despite about five straight years of increasingly bad football, Florida Atlantic is close to competing for the Conference USA title. Can ace recruiter Charlie Partridge prove his coaching bona fides in 2014?

1. Pelini was building something

In 2012, Carl Pelini inherited a Florida Atlantic program in disrepair. The Owls' win total had fallen in each of Howard Schnellenberger's last four seasons, from eight to seven to five to four to one. Schnellenberger's final team ranked 116th (out of 120) in the F/+ rankings. It was almost certainly going to take Pelini a while to figure out how to move the program forward.

After only 19 games in charge, with a 5-14 record, Pelini resigned for reasons that had nothing to do with the product on the field. Confronted with evidence of "illegal drug use," both he and defensive coordinator Pete Rekstis stepped down. Of course, it got weirder. Pelini tried to rescind his resignation, and then FAU asserted that there was more to the issue than just drugs. A few weeks later, FAU accepted Pelini's withdrawl of resignation ... and fired him with cause.

Drug use or no, it's easy to cobble together pieces of the story to fit some sort of "This just wasn't working out, and now everybody gets to move on" resolution. The problem, however, is that it was beginning to work out. At the time of his "resignation," Pelini's Owls ranked 88th in the F/+ rankings -- not good, but quite a bit better than at any point in recent history. Thanks to both a tough early schedule and three one-possession losses, the record wasn't yet reflecting the progress, but Pelini's young squad was indeed growing.

It grew even more in Pelini's absence.

Amid the turmoil, FAU won four straight games under interim coach (and offensive coordinator) Brian Wright to finish the regular season at 6-6. Just a couple of days after Pelini's resignation, the Owls destroyed Tulane. Then they laid waste to three awful teams by a combined 117-23 margin. In just a month, their F/+ ranking improved to 73rd. Wright took what Pelini was building, added a layer of "Everybody's writing us off" disrespect fuel, and fielded a tremendous squad.

2. Partridge was not the safe choice

Judging by the Owls' performance under Wright, it would have certainly been understandable if FAU had just given him the full-time keys to the program. His guidance of the program was better than his guidance of the offense, honestly, and with solid returning talent, he could have potentially engineered a strong 2014 campaign. Granted, he only had a month of experience as FAU's head coach, but he had proven quite a bit in that month.

Instead, FAU aimed higher. Or at least, the Owls took a bigger risk, giving the job to 40-year-old Charlie Partridge. A Plantation, Fla., native, Partridge spent the last six years as a Bret Bielema assistant, first at Wisconsin, then at Arkansas. He is known as an ace recruiter with all sorts of Florida ties, and he has certainly backed up those claims by already locking down two high-profile commitments in the 2015 class: blue-chip running back Jordan Scarlett and his cousin, three-star athlete Rodrick Archer.

It's a long way to 2015 Signing Day, but these early commitments have verified why FAU hired Partridge. The odds are pretty good that his recruiting ability will help to build the Owls into one of the more purely athletic teams in Conference USA. What we don't know yet is whether or how he'll be able to coach this talent. Again, Wright's head coaching résumé is barely longer than Partridge's, but his one-month audition was pretty spectacular. FAU took a risk in forgoing Wright (who, in a best-case-scenario twist, stayed on as Partridge's offensive coordinator), but risks are often rewarded.

3. Turmoil made the Owls better

FAU's 2013 schedule was back-loaded with easy teams, and even if Pelini had stayed on as head coach and the Owls had continued to play at their established level (around the No. 88 mark), they likely would have finished 3-1 at worst in their final four games. But whether it was because of Wright's leadership or anger or the simple progression of young players, FAU raised its game significantly in the last month of the regular season.

A plus-13.1 adjusted scoring margin for the entire season would have ranked 15th in the country, just behind Fiesta Bowl champion UCF and ahead of Rose Bowl champion Michigan State. In the "it's not who you play, but how you play" department, FAU played like a top-20 team even while destroying teams a top-80 team could have beaten (Southern Miss, NMSU, FIU). Even in the finale, a mere 15-point win over an awful FIU team, the Owls controlled the entire game, outgaining the Golden Panthers by a 431-170 margin. It took three turnovers (two in FIU territory) to keep that game within about 25 points. 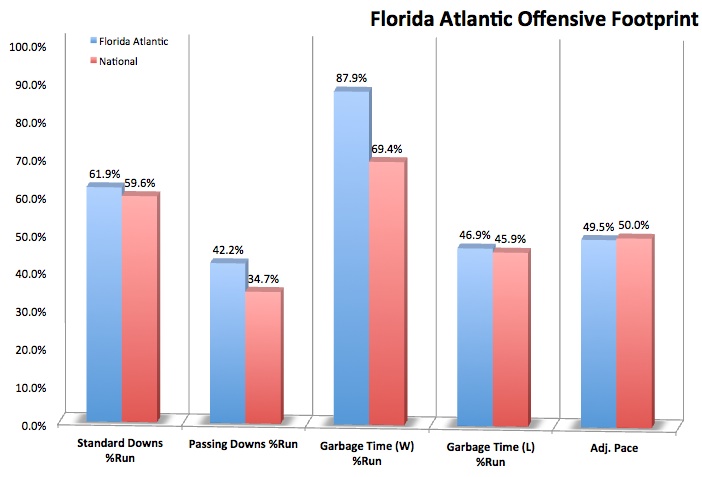 The quarterback position was a total question mark heading into 2013, but after splitting the job with freshman Greg Hankerson early in the season, Jaquez Johnson took control of the offense later in the year, and he finished the year about as well as one could hope. He was the team's most successful runner, but as he got comfortable in his role, his play-making potential as a passer emerged.

Johnson's late-season leap could have been simply due to the competition at hand, but as the season progressed, FAU seemed more willing to let him throw downfield; that coincided with overall offensive improvement.

FAU's offense is slightly run-first, which works well with Johnson's still set as an efficient, reasonably explosive dual-threat. All-or-nothing back Jay Warren returns after a solid freshman season, and up to three highly-touted freshmen could join the rotation this season. The running back position will be quite young, and Johnson himself is only a junior; the backfield will be exciting in 2014 and potentially outstanding in 2015 and beyond.

5. Big-play guys are back

FAU's offense featured a few efficiency weapons and a few all-or-nothing explosive guys. Most of the former are gone, and most of the latter return.

Gone: Running back Damian Fortner and his 43 percent opportunity rate (meaning he got four or five yards upfield quite frequently) and minimal explosiveness. Daniel McKinney and his 79 percent catch rate. Tight ends Darion Howard and Nexon Dorvilus and their combined 65 percent catch rate.

Now, possession receivers and efficiency backs are easier to find than big-play guys, so it's possible that players taking on a heavier load this season (Y-receivers Lucky Whitehead and D.J. Juste or tight end Alex Deleon, for instance) could do just fine. Still, it's an unproven area, and efficiency is necessary for big plays to matter much.

That's what we call skinny guys who can fight, right? You could certainly apply it to FAU's 2013 offensive line, which averaged just 285 pounds and featured two starters at 280 or lighter. Granted, it's hilarious to think of this as small, but for college football in 2013, it's not huge, especially for a run-first offense.

Despite the loss of two two-year starters, the line does return a little bit of experience in 2014 (33 starts distributed among five players) and will automatically get bigger if big Mike Marsaille secures a starting role. The Owls kept opponents out of the backfield against the run in 2013 and could do so again this fall, though there are certainly some questions to answer in replacing DeAndre Williams and Mustafa Johnson. 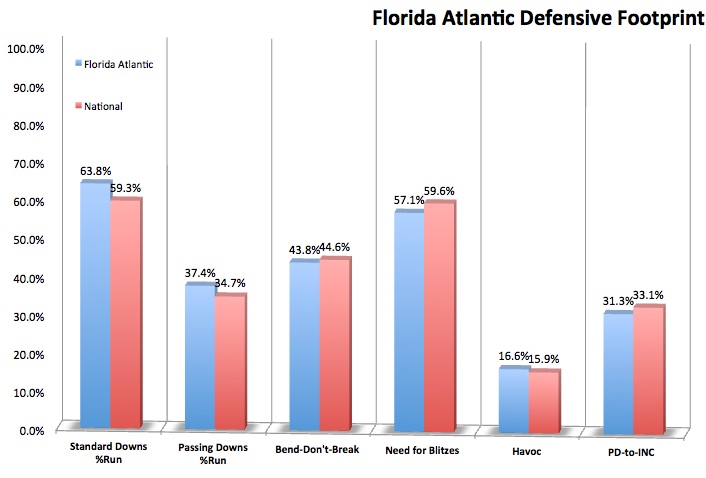 7. Opponents wanted nothing to do with passing

The first thing you notice is that, despite quite a few pass-happy offenses on the schedule, opponents ran the ball three to five percent more frequently than the national averages against FAU.

The second thing you notice is that FAU ranked 10th in the country in Passing S&P+ with the No. 26 pass rush according to Adj. Sack Rate. Pretty easy to see why opponents kept the ball on the ground, eh?

FAU's pass defense was legitimately awesome in 2013. Not even taking sacks into the equation, opponents averaged more than 7.0 yards per pass just twice -- UAB averaged 7.8, and Auburn averaged 11.4 in just 18 passes. Over the last month of the season, opponents completed 38 percent of their passes with zero touchdowns and six interceptions. Six Owls recorded at least 2.5 sacks, and five defensed at least four passes. The secondary should be just as scary this fall, but the pass rush must be reconstructed.

What Bellantoni won't have in 2014, however, are star ends Martin Wright and Cory Henry (combined: 13.5 sacks) and solid blitzers Adarius Glanton and Randell Johnson (combined: five sacks). FAU's defense was a bit lucky from an injury perspective up front -- the Owls got away with mostly playing four linemen and three linebackers without dipping into the bench -- and while that paid off in 2013, it leaves some questions for 2014.

Can young ends Robinson Eugene, Shalom Ogbonda, and Trey Hendrickson make a similar impact? What about the newcomers at linebacker? And what happens if there are actually some injuries this year? Some former star recruits could get chances to shine in 2014 -- Ogbonda, tackle Lance Burlingame, sophomore linebacker Robert Relf, freshman linebacker Kris Harris -- but it's not automatic that they will.

9. The secondary will still be ridiculous

A shaky front seven can threaten even the best secondary in the country; if there's a minimal pass rush, or if the front is getting gashed for seven yards per carry, the defensive backs won't get many opportunities to dominate. But with at least a bit of competency up front, the FAU secondary could be just as effective as it was in 2013 in this 4-2-5 structure.

Unlike a lot of teams attempting a 4-2-5, FAU has the depth and volume of athletes in the back to pull it off. Smith's numbers are incredible, and while there is a potential question mark at the other cornerback position (it looks like Sharrod Neasman and Ronnie Scott are getting the first cracks at the job), the safeties are aggressive and experienced, and FAU has a wealth of interesting sophomores, redshirt freshmen, and true freshmen (including a Raekwon!) attempting to break into the two-deep.

This is one of the best defensive backfields in mid-major football. It might be the best.

... FAU's future is setting up beautifully. The talent has been upgraded quickly, and for two straight seasons, the Owls have improved dramatically late in the season. FAU improved by 42 spots in the F/+ rankings in 2013, and while there could be a little bit of natural regression-to-the-mean in 2014, there might not be much.

Most of the key reasons for FAU's surge return, the skill positions are explosive (if inefficient), and the secondary is outstanding. The only real question marks are in the efficiency department on offense, in the pass rush on defense, and in the head coach's office. Plenty of ace recruiters have failed as head coaches, and while Partridge's initial moves -- retaining a successful coordinator, among other things -- have been exciting, he still has a lot to prove.

Trips to Marshall and North Texas will likely preclude a serious division title run even if Partridge is immediately worth his salt, but the fact that we can with a straight face talk about any sort of title run about a season and a half after the Owls looked hopeless, and only a few months after the head coaching position fell into turmoil, is incredible.