Get out of our lives, Nick Saban.

Share All sharing options for: Exploring the IMDb pages of college football coaches

College football coaches coach college football, but did you know sometimes they end up on TV and in movies? It's true! Mike Leach was on "Friday Night Lights!" Barry Switzer was in "Any Given Sunday!"

While we can learn everything we need to know about Lane Kiffin from Vince Vaughn's IMDb page, here are some film roles you might've missed, all from one of the internet's most essential websites:

Sorry, sports fans, Mark Richt did not voice the titular dog in Damn Good Dog. It's a "dogumentary," and like everything else Mark Richt has been in (except maybe this video of maybe-him curling), he played himself.

The equivalent of playing Terrified Bank Hostage 6, but at least it's a credit.

Research suggests this is a different Lou Holtz, mistakenly filed alongside the coach's actual credits, but we choose to believe a fresh-faced Holtz, in between playing at Kent State and coaching at Iowa, tried his hand at stand-up comedy and made his way all the way up to "The Tonight Show."

Two facts as important as they are exciting.

Here you were, thinking Howard Schnellenberger couldn't possibly be cooler. Via Wikipedia, an image (and yep, that's really him): 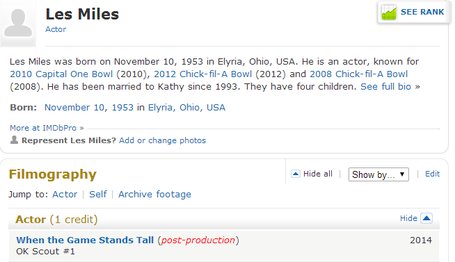 And look, we have an actual actor here! If OK Scout #1 doesn't eat grass, I want my money back.

Surprisingly, his page doesn't list him as having won 17 Academy Awards during his time as a college student.

Quite the showman, for a three-year-old.

Yep, June Jones was once Brett Favre's NFL offensive coordinator, before someone else decided to trade the future Hall of Famer. They made a TV show about it.

Perhaps the most prolific man in both college football and show business: 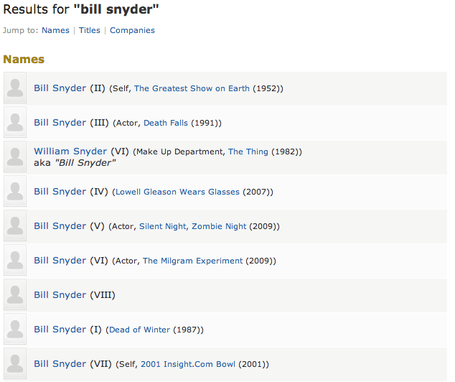 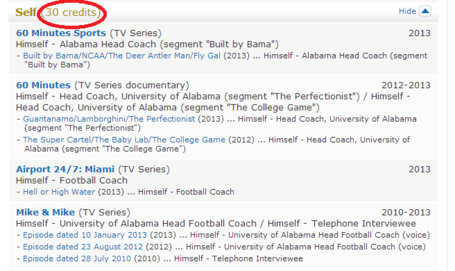 PAWWWWWL NICK SABAN'S BEEN IN TOO MANY DANG MOVIES, I JUST DON'T THINK MR. HOLLYWOOD'S THE MAN TO LEAD THIS PROGRAM ANYMORE

Not the same Ron Prince? You be the judge. 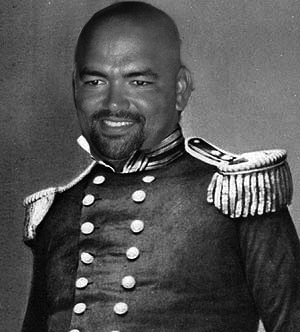 What can you find? The best place to start is probably the full cast list for "The Blind Side."