The big 2014 FIU football preview: Long crawl back to competence

FIU has fallen apart quickly, but there is no quick way to rebound from the level of ineptitude the Golden Panthers showed last fall. In Ron Turner's second year, the goal simply has to be planting the seeds for competence in 2015 or 2016.

Share All sharing options for: The big 2014 FIU football preview: Long crawl back to competence

1. It was barely two years ago

In September 2011, Florida International won at Louisville on a Friday night, then took down UCF at home the next weekend. The Golden Panthers were receiving AP poll votes, and receiver T.Y. Hilton was becoming a bit of a household name, at least among college football-obsessed households.

FIU faded a bit, losing three Sun Belt Conference games (two by a combined six points) and falling out of the conference title race. Marshall would pull an upset of the Golden Panthers in the Beef 'O' Brady's Bowl, and FIU would finish a disappointing 8-5.

Still, the fact that 8-5 was disappointing was an incredibly positive sign. The team's primary rival, Florida Atlantic, was wrapping up an 1-11 campaign and looking for a new coach. Hilton was leaving for the pros, sure, but head coach Mario Cristobal was signing quite a few three-star recruits, and the future was still looking bright for a program so moribund as recently as 2007.

The Golden Panthers lost five games by a touchdown or less in 2012, and with the athletic director already tired of Cristobal's flirtation with other schools, they fired him. They whiffed on hiring Butch Davis and instead replaced Cristobal with former Illinois head coach Ron Turner. And while you never want to render permanent judgments on a coaching hire after just one year (here's where we're legally required to mention that South Carolina went 0-11 in Lou Holtz's first season in 1999, then went 17-7 over the next two years), it's almost impossible for 2013 to have gone any worse for FIU, in terms of on-the-field play, public relations, etc.

In just two years, FIU went from a disappointing 8-5 to a complete catastrophe. By default, it probably won't get worse in 2014, but is there any chance of getting better?

FIU's first four games of 2013 were among the worst ever played by an FBS team. In the end, perhaps the biggest surprise of the season was that FIU wasn't the worst team of the F/+ era (2005-13) and almost wasn't even the worst team in 2013. Somehow 2011 New Mexico, with a defense that was even worse than FIU's offense, still manages to squeak out the overall title.

Teams that fall this far don't tend to recover under the same coach. That it was only Turner's first year offers some consolation, but not much.

3. Never an ounce of hope

It's just piling on at this point, but there's one more thing I have to point out before we move on: FIU's offensive performance against Louisville may have been the single worst FBS offensive performance of the last nine seasons. It's not uncommon for an Adjusted Score to drop into the negative range; teams' single-game S&P+ performances are applied to a general curve reflecting the real scoring curve, and, well, sometimes a single performance is really, really bad. But it takes a lot to get to minus-8.5 adjusted points.

In 43 plays, FIU gained 27 yards. The Panthers attempted 13 passes, completed four for 27 yards and got sacked four times for a loss of 33. FIU's leading rusher carried 14 times for 12 yards. FIU got the ball 13 times, punted 11 times (with nine three-and-outs) and ran out the clock twice. For good measure, they also muffed a punt. This wasn't a turnover-laden disaster ... this was worse. A no-ambition, no-hope experiment in running out the clock from the opening kickoff.

A big, fat minus-8.5 will certainly affect your averages, but FIU's averages were abhorrent even without the Louisville game. Louisville just made it historically bad.

There was a bit of a rally in the middle of the season. FIU gained more than 250 yards in a game only four times (!), but three came in a four-game span between October 5 and November 2. FIU was able to knock off Southern Miss and stayed quite competitive against UAB and Louisiana Tech, but the bottom dropped out late. The combined (real) score of the last four games of the season: Opponent 150, FIU 26.

Now, as promised, we move on. 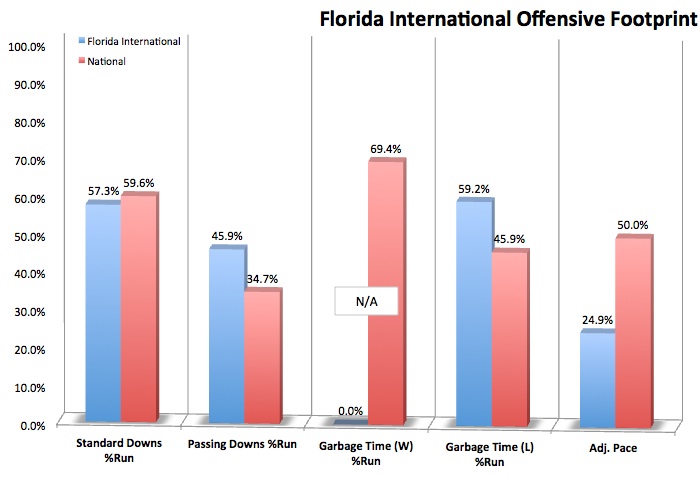 To Ron Turner's credit, he doesn't seem to be panicking after such an awful first year, at least not when it comes to on-field personnel. He shook up his staff quite a bit, and justifiably so; offensive line coach Steve Shankweiler was promoted to offensive coordinator, and new assistants were brought in to coach running backs (Kerry Dixon II from Florida Atlantic), defensive line (Randy Melvin from the Buccaneers), linebackers (Rob Harley from Michigan State), and special teams (Shannon Moore from South Dakota State).

FIU's 2014 recruiting class, however, was entirely focused on high school talent. Turner didn't aim for quick-fix junior college transfers, as did Paul Petrino at Idaho or Bill Clark at UAB. There were no three-star signees this year (according to Rivals) as opposed to previous years, but there were quite a few high-two-star recruits at running back, receiver, offensive line, and linebacker. Sticking with four- or five-year talent means your base of depth and experience can be pretty strong by year three or four. It also means that you're probably not going to be much better in year two. The players who played a major role in last year's struggles will still be the faces of the program in 2014.

There will be a new face at quarterback, however. Primary starter Jake Medlock transferred, leaving the job to probably E.J. Hilliard, who showed decent mobility (5.3 yards per non-sack carry) but struggled in the passing game. He took a sack on almost every five attempts and averaged just 10 yards per completion. He didn't have any help, however. If youngsters can push returnees like Lamarq Caldwell and Silas Spearman III at running back or T.J. Lowder and Clinton Taylor at wideout, that can't be a bad thing. Hell, Hilliard could end up getting a severe push from a freshman like Alex McGough as well.

Overall, the experience level is pretty strong for this offense in 2014; if nothing else, that's a reminder that FIU was quite young last year. Experience will bring at least a little bit of improvement, at least if Shankweiler's scheme fits the personnel to some degree.

5. No excuses up front

The offensive line features two seniors and four former three-star recruits. Heading into 2013, FIU returned just nine career starts up front, which helped to produce predictably hopeless results. But of the six players who started a game last year, five are back, and the career starts total has risen to 57. So now there's experience and a potentially high(ish) ceiling. The offensive line absolutely has to become a more reliable presence for the offense this fall. 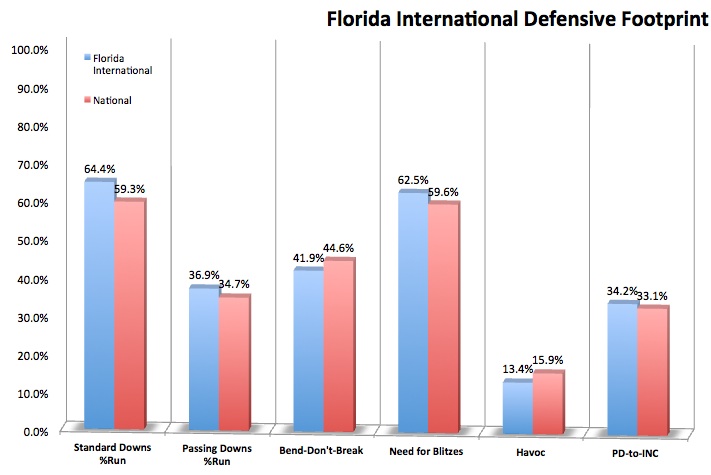 6. The pass defense wasn't too bad!

It was really difficult to find a positive spin for last season's offensive numbers. It's not quite as difficult for the defense. The Golden Panthers certainly struggled to stop the run or leverage opponents into obvious passing situations, but when they got there, they defended the pass and rushed the passer reasonably well.

Granted, only two FIU defenders had more than two sacks, and both are gone. But the secondary looks strong, and there are quite a few former three-star recruits up front. The linebacking corps has a lot of questions to answer, but it's fair to say the defense will come around before the offense does.

Of the 10 linemen listed above, five were three-star recruits (including WVU transfer Imarjaye Albury), and three were high two-stars. There is upside here, and last year's not-completely-awful line stats reflect some of that. FIU was a pushover in short-yardage situations but did a decent job of both getting into the backfield and preventing open-field opportunities. (That FIU's overall rushing stats were a lot worse than its line stats generally suggests some deficiencies at linebacker.)

Upside or not, it's never particularly good to lose both of your starting tackles, especially when they combined for 21 tackles for loss on a team starved for big plays. Five different returnees logged at least 1.5 TFLs in somewhat limited opportunities, and that's encouraging, but Isame Faciane and Greg Hickman were perhaps the defense's two best play-makers, and both are gone.

8. A glimmer of hope in the secondary

Richard Leonard was a steady corner for Cristobal's 2012 squad, but he was academically ineligible last fall. His return does lovely things for FIU's depth in the defensive backfield. He and safety Justin Halley are both seniors with ball-hawking tendencies, and of the five DBs who logged at least 10 tackles last year, four return. Plus, last year's star recruits Xavier Hines and Vontarius West could play a role.

If a pair of new starting tackles settles in, and the linebackers play competent ball, the secondary could lead a nice surge in the defensive ratings. But those are two relatively large ifs.

9. A creative (and effective) punting arrangement

Midway through the 2013 season, quarterback Jake Medlock overtook Chris Ayers on the punting two-deep; he proceeded to bomb away with a 42.6-yard average for the season. Ayers was a fair-catch machine, however, and if he can add a bit more to his average, the punting should be a relatively decent field position weapon again in 2014, even without Medlock. Fellow sophomore Austin Taylor was strong under 40 yards last year as well, so that position isn't a concern.

Of course ... the rest of the special teams unit needs some cleaning up. Touchbacks were non-existent on kickoffs, and the return game was a bit of a disaster. You can mask a lot of deficiencies with solid special teams play, but FIU's special teams unit wasn't nearly good enough overall in 2013.

FIU returns most of last year's first- and second-string, and Ron Turner used a few mulligans by bringing in some new assistants. The schedule features eight home games (a major rarity for mid-major teams) and two FCS opponents (including, yes, the same one that whipped FIU by 21 last year). The table is set for improvement, both for the reasons listed above and for the simple fact that FIU almost literally cannot get worse. The other nine teams on the Worst list atop this piece were all so bad that they had no choice but to improve the next season, and that's certainly what will happen here.

It's hard to get too optimistic, though, isn't it? The Turner hire seemed shaky to start with, and despite the home games and FCS opponents, the schedule still only features five teams projected worse than 100th. FIU could improve rather dramatically and still only rank in the No. 110 range, worse than all but three or four opponents.

Still, two wins and a No. 115 ranking would constitute improvement in 2014, and the team's so young that after returning 16 starters this year, it could return another 14 to 18 in 2015. Improve a little, then improve a little more next year: that has to be the goal. FIU has fallen apart quickly, but there is no quick way to rebound from the level of ineptitude the Golden Panthers showed last fall.