Following a disastrous 2011 season, Rick Stockstill has put together back-to-back eight-win seasons at Middle Tennessee. A third straight is within reach if MTSU can avoid too much of a drop-off at quarterback and on the offensive line.

1. Another ascent is complete

In the business of coaching, you rarely get a chance to rebound at the same school at which you collapsed.

But the win total fell from 10 in 2009, to six in 2010, to two in 2011. He probably needed a big season in 2012 to avoid the reaper in Murfreesboro, and with some luck, he got it. The Blue Raiders lost to McNeese State but whipped Georgia Tech and went 4-1 in one-possession games; they went 8-4 even though they didn't actually improve that much. And in 2013, they improved a bit more and won another eight games despite moving to a (marginally) more difficult conference.

Last fall, MTSU ranked 85th in the F/+ rankings, the second-best F/+ finish in Stockstill's tenure. The season ended with a dud of a bowl performance against Navy, one remembered more for the cheap shots an MTSU player delivered than anything else. But after teetering on the brink of collapse, the program has pulled off the rare re-ascension.

So what now? Longtime starting quarterback Logan Kilgore is gone, as are his top two receivers, and four offensive linemen with starting experience. The defense is experienced and could easily be the best MTSU has fielded since at least 2010, but will that matter if a new offensive identity lags?

Stockstill has faced bigger challenges than the ones he will face in 2014, but there are certainly questions for the Blue Raiders to answer.

Saying a single game or a single moment turned a season around is typically nothing more than a hindsight exercise. We don't know for sure that anything has changed in the present tense, but looking back, we can do some pinpointing.

That said, MTSU's 51-49 win over Marshall on a Thursday night in late-October turned the Blue Raiders' 2013 season around.

It came after three consecutive losses, two by 27 points. The Blue Raiders had fallen to 3-4 overall, and while the schedule was certainly going to ease up in November, a 1-3 start to conference play would have knocked them far enough down the Conference USA totem pole that a bowl bid would have become rather unlikely. They really needed this one. And they needed a whole 60 minutes to get it.

The first three quarters were back-and-forth. On three occasions, MTSU held a seven-point lead, and on all three occasions Marshall responded to tie the game. It was tied at 7-7, 14-14, 21-21, and 28-28, but the Blue Raiders took leads of 38-25 and 45-35 in the final 20 minutes. The Thundering Herd responded with two touchdown runs, one with eight minutes left and one with 2:30 left, to take a 49-45 lead, only their second lead of the game.

MTSU's game-winning drive seemed doomed on a few different occasions. Logan Kilgore found Tavarres Jefferson for 24 yards on third-and-12 from the MTSU 19, then found him for another 14 yards. The two connected on third-and-4 to keep the drive alive, then connected AGAIN on fourth-and-5 from the Marshall 27. With eight seconds left, Kilgore threw incomplete to Terry Pettis, but on the game's final play, he once again looked to Jefferson for the touchdown.

From a 3-4 start, MTSU finished 5-0, raising its quality of play by almost 10 adjusted points per game.

Hindsight, sure. But that's a turning point. 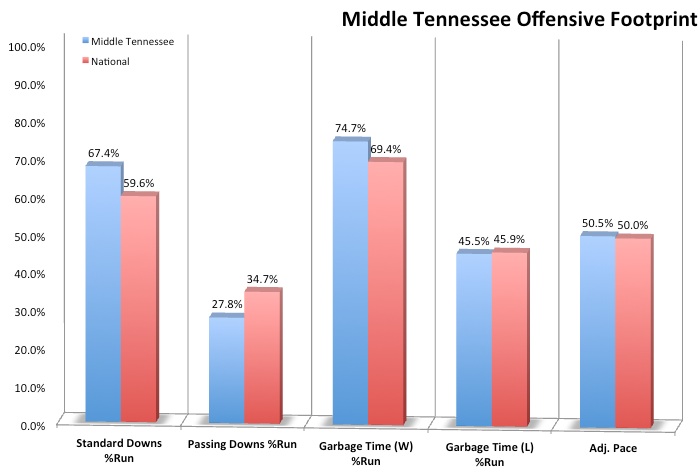 Some offensive systems are designed to protect a quarterback. Maybe you steal yards by throwing on first-and-10 to set up easy running situations; maybe you run a lot on third-and-8 to protect him (and yourself) from disaster.

Other systems, however, go in the opposite direction. Stockstill and offensive coordinator Buster Faulkner lean heavily on the quarterback position. At least, they did with Logan Kilgore behind center. The three-year starter was asked to hand off on most standard downs and throw on most passing downs; this does no favors to a quarterback's stat line, but Kilgore still completed 61 percent of his passes with minimal sacks. He was interception-prone -- 36 for his career -- but MTSU's offense was perfectly decent with him in charge, even considering the degree of difficulty.

And does he have a line?

Those two questions will basically decide MTSU's season. This spring, three quarterbacks seem to be on even footing. Last year's backup, Austin Grammer, showed lovely potential with his legs, rushing for more than six yards per carry (non-sacks) and rushing for 106 yards against North Texas. But his passing left something to be desired, to put it kindly. Big-armed redshirt freshman A.J. Erdely and grayshirt (and coach's son) Brent Stockstill are also fighting for the job. Stockstill is, perhaps not surprisingly, said to have the best grasp of the offense; in a system that requires lots of quick passing and strong decision-making, perhaps that gives him the edge. Or perhaps Grammer's struggles over 49 pass attempts were too small a sample, and he has the overall skill set to take the job in an interesting direction.

Regardless, someone will need to play competent ball at this position.

Meanwhile, the line has some serious restructuring to undergo on the interior. Tackles Darius Johnson and Isaiah Anderson are back, but the three middle spots are all looking for new starters. MTSU was 41st in Adj. Line Yards and 13th in Adj. Sack Rate; the sack rate was aided by quick passing, but these are still strong numbers, and it will be interesting to see how a trio of sophomores and likely new starters (Josh Chester, Daniel Stephens, Adam Stickel) perform.

5. Plenty of explosiveness to go around

None of this really matters without a decent quarterback, but the Blue Raiders will certainly have their share of exciting skill position performers, especially at the running back position. Four exciting backs (of all shapes and sizes) return; all four had an opportunity rate (carries that went at least five yards) of at least 38 percent, and three of the four finished with an average of 5.3 highlight yards (the yards you get after the first five) per opportunity. Big Jordan Parker rushed for at least 100 yards in four games last year, explosive Reggie Whatley did so three times, and Jeremiah Bryson and Shane Tucker each did so once. If Grammer wins the starting quarterback job, MTSU will have one of the deepest, most exciting running games in the mid-major universe (if the line is decent, of course).

Depending on who emerges at wideout, it might not be a bad idea to go even heavier on the run. Tavarres Jefferson was steady with solid upside, and Kyle Griswould was a decent possession receiver. Marcus Henry and Devin Clarke, last year's No. 3 and 4 receivers, were quite explosive (15.5 yards per catch between the two of them) and could certainly be useful in play-action situations; we'll see what happens to their averages when they are given more targets. Junior college transfer Ed'Marques Battle and three redshirt freshmen should threaten to see plenty of targets as well.

There is a lot of potential on this offense, but potential has to turn into production quickly, especially at quarterback. 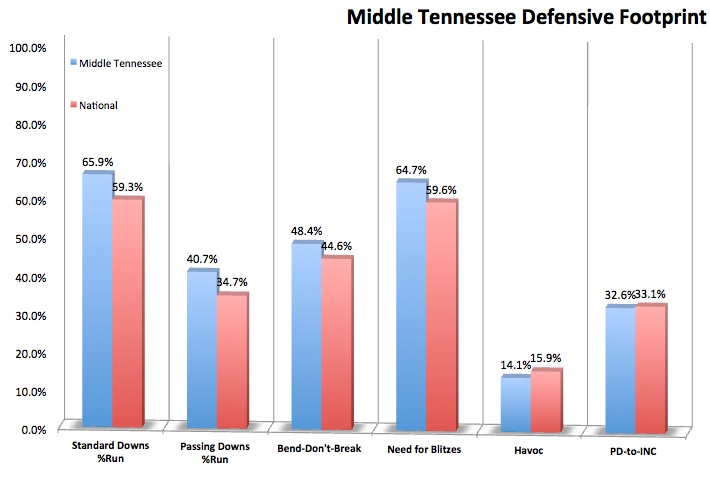 Success Rate is basically an on-base percentage for football, a way to track efficiency play-for-play. IsoPPP, meanwhile, basically looks at the magnitude of the successful plays. Using these two measures, it's pretty easy to spot a bend-don't-break defense -- if your success rates were poor but your IsoPPP was strong, you were playing a conservative defense, sacrificing six-yard gains to prevent 60-yarders.

Perhaps no defense in the country utilized this style more than MTSU, which ranked 114th in Success Rate+ and 13th in IsoPPP+. The Blue Raiders attempted to raise the aggressiveness on passing downs (the result: a strong pass rush and a few big plays allowed), but conservatism was the goal early in the typical set of downs.

This approach paid off. Middle Tennessee's defense certainly wasn't good by any objective measure, but it was significantly better; the Blue Raiders ranked 116th in Def. F/+ in 2011 and 114th in 2013 but improved to 84th last fall. There are a couple of key holes to fill, but the depth here should ensure another decent showing and perhaps a little bit more improvement.

That said, a few more stops near the line on standard downs wouldn't be the worst idea in the world.

When passing downs did come around, defensive co-coordinators Tyrone Nix and Steve Ellis were solid at varying and disguising their attacks. Only three Blue Raiders had more than two sacks last fall, but eight had at least 1.5, and seven of those eight return in 2014.

Of course, you can generate more pass rush opportunities if you have a prayer of stopping the run. MTSU did not last fall. The Blue Raiders ranked 102nd in Rushing S&P+, 105th in Adj. Line Yards, and 122nd in Stuff Rate (run stops behind the line). Lineback T.T. Barber had 8.5 non-sack tackles for loss, and tackles Jimal McBride and Shaquille Huff combined for 8.5 as freshmen, but that was about it. The ends provided minimal run support.

From a play-making perspective, MTSU is loaded at tackle with Patrick McNeil and the sophomore combo of McBride and Huff. But there's nothing saying you won't once again be able to push around MTSU's ends again.

But the unquestioned star of this defense has to be box score-filler T.T. Barber at weakside linebacker. As a sophomore, Barber led the team in tackles and tackles for loss, recorded three sacks, defensed five passes (three picks, two break-ups), and forced three fumbles. In 2013, linebacker Roderic Blunt made a bit of a name for himself with his out-of-control play against Navy, which was a shame, both because that didn't necessarily reflect his normal character (he issued a public apology after the game), and because Barber is the MTSU linebacker casual fans should know. Perhaps that will change in 2014.

9. A little bit of injuries luck

One thing that does bear mentioning here: MTSU didn't suffer too many injuries on defense. That alone could have accounted for part of the Blue Raiders' improvement. Sure, there were injuries here and there -- Jimal McBride missed four games, pass rusher Dearco Nolan missed three, etc. -- but compared to the norm, MTSU escaped relatively unscathed. Five regulars on the line played in all 13 games, along with the top seven linebackers and the top five defensive backs. There's nothing saying this can't happen again in 2014, but injuries luck certainly evens out over time, and the injury bug was relatively kind to MTSU last fall.

And if the bug bites the MTSU secondary in particular, things could get dicey. MTSU must replace two of its top three corners, including the aggressive Kenneth Gilstrap, and while Stockstill has had quite a bit of recruiting success here -- of the 12 players listed above, seven are former three-star recruits, and two more were high-two-stars -- but experience is minimal.

Following a disastrous 2011 season, Rick Stockstill has won 16 games in two years, and his MTSU program immediately established itself as a solid program in Conference USA. This is an impressive accomplishment, but Stockstill doesn't appear to be standing still. He signed eight junior college transfers, including four defensive backs and two offensive linemen. He's got a strong habit of redshirting and developing five-year players, but he certainly doesn't appear willing to forego the 2014 season for future development.

If a quarterback emerges and the offensive line doesn't stink, there are certainly wins to be found. Seven of MTSU's 12 opponents this fall are projected 100th or worse. Five of six home games are winnable (six if you don't think much of BYU), and of the road games, perhaps only Marshall and Minnesota are out of reach.

This could easily shape up as another eight-win season in Murfreesboro if the quarterback position is sound. If, if, if.