North Texas took a significant step forward in 2013, Dan McCarney's third year in charge. The Mean Green will have to account for quite a few departed difference-makers this fall but should have enough pieces remaining to reach another bowl in 2014.

Share All sharing options for: The big 2014 North Texas football preview: Staying good is even harder

Yes, it was only a New Year's Day bowl via technicality. No, the Heart of Dallas Bowl doesn't exactly have the stature of the Capital One Bowl, and no, UNLV wasn't exactly LSU or Michigan State. But North Texas' 36-14 win over UNLV in the Cotton Bowl early on January 1 was significant nonetheless.

The trajectory for the Mean Green under McCarney has been clear and significant. He cleaned up the foundation for a couple of years, added discipline and depth, and then rode an experienced two-deep to nearly unprecedented success. Sure, North Texas had won nine games at the FBS level before -- 2003 under Darrell Dickey, 1977 and 1978 under Hayden Fry, 1959 under Odus Mitchell. McCarney lifting a monstrosity of a Heart of Dallas trophy a couple of months after almost winning Conference USA in the team's first attempt wasn't automatically the high point for this program. But it was easily the highest point in quite a while, the completion of a comeback attempt that began in 2005 and suffered endless false starts.

And now comes the hard part. Succeeding once isn't easy, but a lot of coaches and programs do it. Succeeding again takes something completely different, and McCarney knows it.

"The challenge ahead is this: Are we a real program, which means no matter who you lose or who gets injured or who graduates, the next group comes in and replaces them," UNT coach Dan McCarney said. "Or do we just disappear off the college football landscape for another 10 years before we can have success again? We want to keep the edge and be really successful and have a program that people can be proud of."

McCarney has himself a new contract, some new assistant coaches, and a roster that is both deep with options and thin on experience. It might be unreasonable to expect North Texas to win nine games again in 2013, but the depth of the fall will be telling. North Texas was legitimately strong in 2013; the encore will be a legitimate challenge.

Following a 2012 season marked as much by stagnation as anything, North Texas' 2013 campaign did not start out with a significant step forward. The Mean Green dominated Idaho to start the year, but everybody did that, and they were outgained by 143 yards by an Ohio team that wasn't nearly as good as we perhaps thought at the time, and they were lucky to lose by only six. Then they fell behind Ball State by a 20-3 margin in the first quarter.

The next five quarters or so set the pace for the rest of the season. They stormed back to steal a 34-27 win over Ball State, and while the offense was mostly a no-show against Georgia, they rode defense and special teams to a 21-21 tie midway through the third quarter. Georgia stormed back to win comfortably, but North Texas was proving both athletic and resilient. And despite a frustrating 24-21 loss to Tulane, in which Tulane returned both a blocked field goal and an interception for touchdowns, confidence was steady. And when the schedule eased up a bit, North Texas took off.

The Tulane loss was costly, as North Texas finished a game short of Rice in the C-USA West standings. But despite the jump to a new conference, North Texas had pulled off its most successful season in a decade, capping it with a pasting of UNLV in front of 38,380 at the Cotton Bowl. 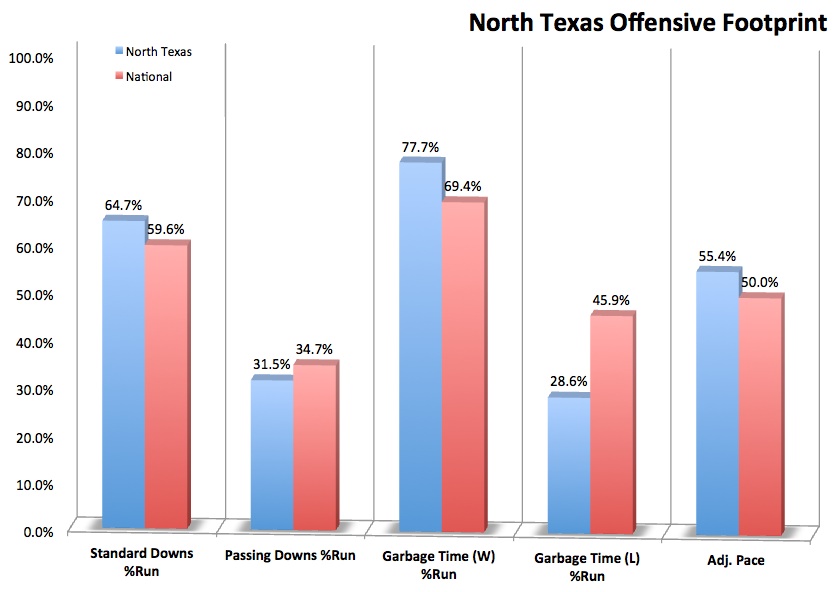 Earlier this week, we talked about MTSU's offense and the way it puts a lot of pressure on the quarterback to make good decisions on passing downs. The North Texas offense devised by offensive coordinator Mike Canales is similar -- the Mean Green ran five percent more frequently than the norm on standard downs and threw the ball three percent more frequently on passing downs.

North Texas' offense was unique, however, in the way that it attempted to stretch defenses horizontally. An offense that requires more passing downs passes trends toward lower completion rates and higher completion yardage; quarterback Derek Thompson, however, had a 64 percent completion rate with only 11.5 yards per completion. UNT's attack was efficiency based and catered to diverse selection of talent, from meaty running back Brandin Byrd (5'10, 223) to waterbug/wideout Brelan Chancellor (5'9, 186). UNT used Chancellor and other weapons to stretch the field horizontally, then tried to drive Byrd right up the middle. It worked reasonably well; the rushing numbers improved in 2013, even if they were still relatively mediocre, but the pass efficiency numbers were great. And now we'll see how strong that identity is with the loss of Thompson, Byrd, Chancellor, and leading receiver Darnell Smith.

Thompson was the starter for all three years of the McCarney era; he will be replaced by either Andrew McNulty (last year's backup), Dajon Williams (an athletic "feast-or-famine" type), or junior college transfer Josh Greer, who completed 64 percent of his passes for Navarro College last fall.

One of the narratives for North Texas in 2014 will be not only having to replace Thompson, but also the Byrd-Smith-Chancellor trio. And to be sure, these three were all explosive and effective, capable of creating big plays out of a rather conservative system.

But there was more to UNT's offense than this trio, and that's a very good thing heading into 2014. If we look at intended touches -- targets plus carries -- we see that quite a few players were involved in the North Texas offense last fall.

Granted, four of the players with the best per-touch averages are gone, but half of the six players with 75-plus touches return, as do six of the 10 with 18-plus. Plenty of new names could play a role this year, from emerging spring star Erick Evans to three-star freshmen like Willy Ivery and Tee Goree, but the new starting quarterback won't be working with a totally green set of skill position players.

(Well, they will indeed be totally green in one way, but you know what I mean.)

5. You couldn't ask for a more experienced line

The nature of the quick passing game assures that North Texas' sack rate isn't going to be tremendously high, line be damned. But for the second straight year, the Mean Green's sack rates were top-10 caliber, and at the very least the run-related line stats improved. North Texas was automatic in short-yardage situations, and the Stuff Rate (run stops behind the line) improved from 118th to 73rd.

The horizontal running options probably hurt UNT's Opportunity Rate (percentage of carries that go at least five yards downfield), but the line improved in 2013 and should improve again with the return of four starters, five players with starting experience (123 career starts), and two all-conference guards. A seasoned line is a new quarterback's best friend. 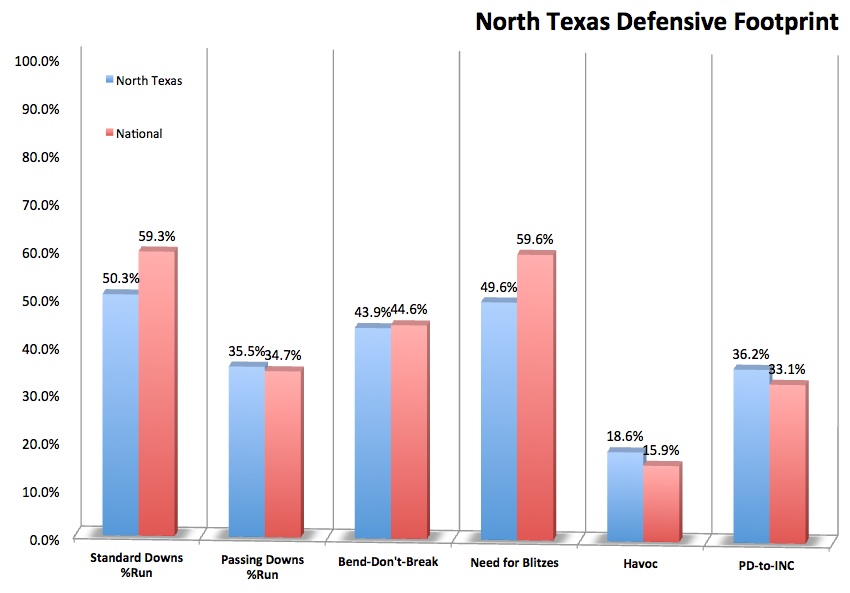 6. This defense was mean

The offense certainly improved a bit in 2013, but the defense was the reason for North Texas' surge. An experienced defensive line improved dramatically, linebackers made plays against both the run and pass, and an athletic secondary made enough plays on the ball to compensate for allowing a big play here or there.

North Texas had one of the most efficient, mean mid-major defenses in the country. The Mean Green logged 79 tackles for loss, 39 sacks, and 17 forced fumbles. (They blocked seven kicks, as well. Seven!) They were big and physical up front and hard-hitting in the back. And now they must almost completely rebuild the starting front seven.

Twelve North Texas defenders recorded at least 2.5 tackles for loss in 2013. The Mean Green tried to keep as many players as possible close to the line of scrimmage, daring you to beat them deep. It was a gamble that paid off more often than not, but we'll see how aggressive defensive coordinator John Skladany feels he can be this fall now that six of the aforementioned 12 defenders are gone.

Players accounting for 25 of 35.5 TFLs, 19 of 28 sacks, and seven of 11 pass break-ups on the line are gone. So are linebackers Zach Orr and Will Wright (combiend: 21 tackles for loss, four sacks, two interceptions, nine break-ups, two forced fumbles).

But among the newcomers to the rotation is a name you might recognize: Oregon transfer Anthony Wallace. The former four-star recruit broke up three passes and recorded a tackle for loss in reserve time in 2011-12 and could anchor the new-look defensive front.

8. Minimal worries in the secondary

Granted, the one loss North Texas has suffered in the secondary is a pretty big one; Oklahoma transfer Marcus Trice was the pace-setter for the Mean Green defensive backfield, defensing 14 passes, recording 4.5 tackles for loss, and blocking three kicks. But the other starters were in no way chopped liver, and UNT returns both an experienced, hard-hitting safety (Lairamie Lee) but also three corners who combined for seven tackles for loss, four sacks, seven interceptions, 14 break-ups, and three forced fumbles.

We'll see if North Texas ends up a bit more leaky when it comes to allowing big plays, and we'll see what happens if depth is tested a bit, but the play-making ability didn't dissipate all that much with the departure of Trice.

9. The art of field position

Field position is incredibly important. All else being equal, a field position margin (your average starting field position minus your opponent's) of plus-6 to plus-10 results, on average, in a win percentage around 78 percent and a scoring margin of around plus-16 points.

Field position is determined in large part by the efficiency of one's offense and defense, and North Texas certainly derived an advantage in that regard. But the Mean Green also coaxed an incredible amount out of the special teams unit.

Brelan Chancellor was easily one of the best return men in the country. He was one of only six players to average at least 16.0 yards per punt return, and of those six, he was the only one to also average at least 27 yards per kick return. He was a one-man field position unit; throw in quality punting from Blake Macek, a strong coverage unit, and an absurd number of blocked kicks, and North Texas ended up with a field position margin of plus-7.2 yards -- the average Mean Green drive started at the 33.0 (11th in the country) while opponents' drives started at the 25.8 (fifth). Only Michigan State (plus-7.7) and Ohio State (plus-7.4) could top UNT's field position prowess.

Macek returns, but the loss of Chancellor here could hurt North Texas a lot more than his absence in the passing game. He was special.

10. The only thing harder than winning is continuing to win

Between Chancellor's impact on field position, Derek Thompson's experience, Brandin Byrd's combination of strength and speed, Marcus Trice's play-making ability in the secondary (and on special teams), and the countless contributions of the six key contributors lost from the defensive front seven, it's safe to say the odds of a step backwards for North Texas in 2014 are pretty good. No matter what kind of depth Dan McCarney has created, and no matter how strong the trajectory of the program might be overall, the Mean Green improved a little too much to be sustainable last fall.

The magnitude of the step backwards, though, will be key. And there's reason to believe North Texas could still be quite strong. There are options at quarterback, there is still experience at the skill positions, there is massive experience on the offensive line, and the North Texas secondary will still be among the best of the mid-majors.

Continuing to win is hard, but it certainly looks like McCarney has a chance to do just that.