The NCAA is afraid of real amateurism

The NCAA is excellent at preserving its lucrative status quo and creating new rules. It is not nearly as good at knowing what's in its own best interest.

Share All sharing options for: The NCAA is afraid of real amateurism

March is a tough one. There is the NCAA Tournament, which is -- despite the dense, ambient stink coming off those first four letters -- one of the most blissfully overwhelming and blessedly human sports experiences to be had on earth.

And then, sucking around the edges of every transcendent moment, is the NCAA itself: unconvincingly advertising its own puffed-up merit during commercial breaks, congratulating itself on another year of success in soft-palmed handshakes in executive suites, and generally getting paid.

The basketball is great, and has an emotional throw-weight unlike anything else, but the context is the context. That's March.

And now there's the National Labor Relations Board ruling that football players at Northwestern University can be designated as employees, and as such are entitled to unionize and bargain collectively with the university. Northwestern is not happy abut this. The NCAA isn't, either, but naturally elected to express its unhappiness in the smarmed-out language of "disappointment."

This March, we don't just get to feel weird about enjoying the NCAA's brazen profiteering off the unparalleled product its athletes produce. We also get to have terrible, willfully point-missing conversations about amateurism on social media.

Wrong  RT @GottliebShow: There are exactly zero College football players who spend 60 hours a week on football, unless you count video games

What you see, right there, is someone who talks about college basketball on television -- and also played college basketball when Bill Clinton was President -- being corrected by someone who played football at the University of Missouri just a few years ago. Moe, for his part, is not sure that "a union is the way to handle it" where this particular issue is concerned, which is not surprising. Most people, after more than a generation of effectively un-rebutted anti-labor noise, don't really know what unions do, but suspect that it is generally bad and broadly anti-competitive and faintly communistic.

That is why the NCAA is attempting to leverage popular distrust of unions as a way of wriggling out of the obligations created by the NLRB ruling. What that ruling found, in effect, is that college football players were effectively employees of the schools in which they're enrolled. This is because the players spend some 50 hours a week on football-related activities, are expected to conform to extraordinary restrictions such as draconian speech and conduct codes and otherwise adhere to standards that do not apply to other students.

The crux of it, which very few are eager to dispute beyond legalisms and Herculean feats of blinkered sentimentality, is that student-athletes are held to a significantly different standard than student non-athletes, to the point where they become something less like students and something more like employees who are compensated for their work with (highly contingent and incomplete) tuition reimbursement.

The nascent union at Northwestern wants to be able to bargain as employees, and its goals are almost poignantly modest. Not annual salaries or performance bonuses or training table room service, but enhanced concussion protocols, a dedicated fund to help players earn their degrees and financial assistance for ex-players who suffered injuries while playing/working with the team. (As employees, they would also have rights under Illinois' worker's comp laws, although that would require a separate ruling.) This is all patently and intentionally not extreme.

No, they aren't unionizing for pay-for-play

This, along with athletic scholarships that run for four years, is not something to which most people who care about college sports would object. It is, maybe, something to which even Northwestern, which is a generally forward-thinking school in a liberal state's leftmost metropolitan area, would not object.

The problem, to hear the NCAA and Northwestern talk about it, is with the way of addressing it. "Northwestern believes strongly that our student-athletes are not employees, but students," the school said in its statement. "Unionization and collective bargaining are not the appropriate methods to address the concerns raised by student-athletes."

It's easy to see what they're objecting to, and why. The same, with all requisite cynicism and NCAA-ness factored in, applies to the NCAA's position. But there is, under all that cynical calculation, a compromise that would mitigate much of the disputed territory in this non-conversation. It happens to be an objective good, too, which is nice. What if amateurism, as the NCAA understands and dictates it, was just a little bit less despicable?

The thing that matters here is creating a system that is more fair for the students.

This is not a rhetorical question, and it is to all appearances one that the NCAA has at least considered; note the "improvements need to be made" language in its response to the ruling. But you might as well notice, in that same statement, the NCAA's language about organized student-athletes "completely throw[ing] away a system that has helped literally millions of students over the past decade alone attend college." This is conscious and mostly dishonest messaging, mostly. But beneath the rhetoric is a foundation on which a number of improvements could be made, and fairly easily at that.

The easiest of those is right there in the bit about helping students attend college. If the NCAA required that athletic scholarships be four-year commitments -- and, say, created a fund dedicated to helping students earn their degrees over a number of years -- it would not Completely Throw Away anything so much as it would refine and improve a status quo that is not presently serving students as well as it should.

The same goes for the Northwestern players' demands for dedicated brain trauma medical staff on the sidelines; by what standards is that a bad idea, let alone a radical one?

It may well be that the NCAA recognizes this, but there's increasingly the sense that the old-growth perversity of the college sports economy has made even simple, commonsense reform impossible. That economy is feudal and cartelized and gold-plated every which way, and contingent on the robust enforcement of a baffling, metastatic rulebook.

So many coats of avarice and craven justification and desperate self-importance have been applied to the idea of amateurism that it's difficult, at this point, to recognize it, let alone engage with it. It's by no means clear that the NCAA is serious or honest enough to do that. Either way, it will spend millions of dollars on numerous court appeals to avoid doing that, because it does not want to change a single thing. 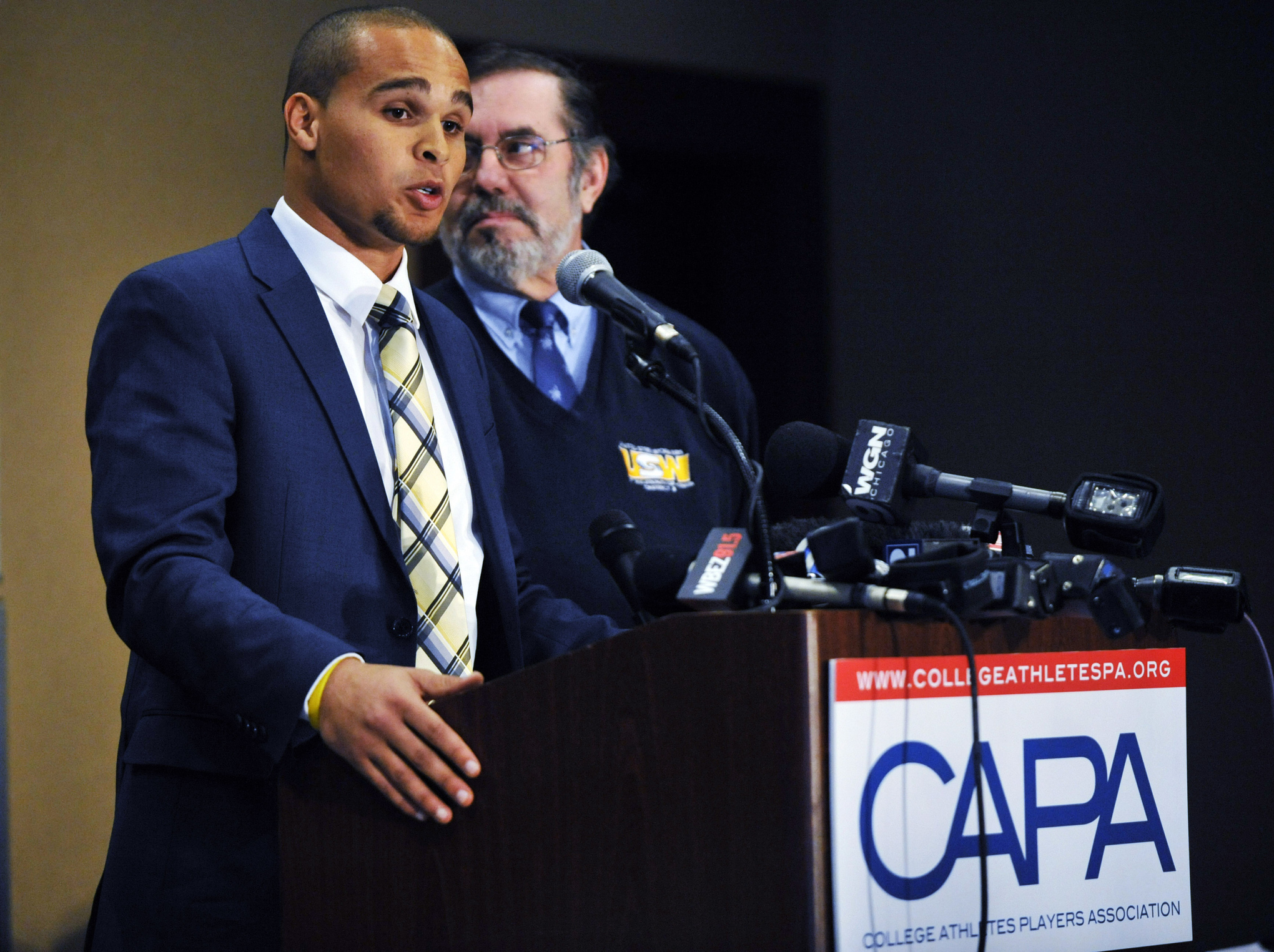 The NCAA will do that because it's the NCAA, because it only really remembers how to say "no" and because it has come to understand its purpose: being the perpetuation of the NCAA. The present system works well for the NCAA and a small caste of administrators and coaches, and it does not work well for the student-athletes under its control, which is the same thing as saying that the present system doesn't work.

This is what gives the NCAA's clucking tone and frowny-face Grave Concerns their tragic-ironic heft. The NCAA is asking you to feel tender sentiments towards a deeply cynical and busted thing that the NCAA itself knows needs fixing.

But the thing that matters is creating a system that is better and more fair for the students; everything else is a distraction, and every other concern should be secondary to the welfare of the humans involved. If the NCAA can't change itself, then student-athletes should be the ones to catalyze the necessary change.

We don't get to know where it all ends up yet, but we can maybe start with one point of consensus: there is no good reason why amateurism has to be so exploitative, and such a lousy deal.

March doesn't have to be this complicated.