UTSA boasts 38 seniors on its 2014 squad. The ambitious Roadrunners have come a long way in a short amount of time, and with experience and continuity galore, they could be the team to beat in the Conference USA West.

Share All sharing options for: The big 2014 UTSA football preview: One last go-round

In 2011, UTSA football was going 4-6 against teams like McMurry and Minot State.

In 2012, UTSA football was going 8-4 against a schedule that included nine current FBS teams.

In 2013, UTSA football was finishing a game shy of the Conference USA West title.

If you were to build a program from scratch and were looking for the perfect location, San Antonio would likely be in the top five or 10 when it comes to potential candidates. It's in the middle of perhaps the most football-populous state in the country. It's a large metropolis without a big-time football team. It's one hour and change from Austin, three hours from Houston, four hours from Dallas, seven hours from New Orleans, and seven hours from Oklahoma City. Your access to recruits is massive, and it would seem that building a program there might be as easy as anywhere in the country.

But it's still really hard. Well-placed Florida International won nine games in its first four years in FBS and has two winning seasons in 10 years. Florida Atlantic did reach a pair of bowls in its fourth and fifth years in FBS but still only has three winning seasons in 10 years. Georgia State, almost as perfectly placed as possible, just went 0-12 in its first FBS season and is 10-35 overall.

Of the recent batch of new, ambitious programs, only Old Dominion has succeeded at a level close to what UTSA has achieved so far, and even the Monarchs spent four years at the FCS level before their FBS provisional year.

UTSA has been incredibly ambitious in its FBS timetable, and Larry Coker is making any and all risks pay off. We should probably be talking about this more.

Of course, Coker is only passing the first test. It was a giant one, but it's almost over. In 2014, just as in 2013, he will field a team that returns at least 19 starters. He could be starting as many as 18 seniors.

His first recruiting cycle was full of players who were ambitious and willing to take some lumps in exchange for major playing time. The next cycle will have expectations and will be young in 2015. There's nothing saying Coker will be able to manage his program's current trajectory with a different batch of less-experienced leaders.

But that's a worry for 2015. In 2014, his team will basically be an incubator test for the value of chemistry and experience. His guys have played together a lot, and they very well might be the favorite to win the Conference USA West division barely three years after playing the program's first game.

UTSA has played eight FBS opponents in its history. In 2013, the Roadrunners will play 12, including seven projected in the Top 92 of the preseason F/+ rankings and four in the Top 60. [...] The Roadrunners are going to struggle in 2013, but they are ahead of schedule, and they should be able to hold their own for at least a good portion of the season.

I wrote that in last year's UTSA preview, and I was reasonably correct ... for a few weeks. UTSA did struggle early on. The Roadrunners eased past New Mexico, the offense showed against Oklahoma State, and the defense certainly held UTEP in check. UTSA was playing somewhere near an average level, though after six weeks its record was just 2-4.

But following a 24-point loss at Marshall, one that featured decent defense but turnovers galore, UTSA got its act together. The Roadrunners played well in a tight loss to Rice (one that would end up costing them the division title even if they didn't realize it at the time), then didn't lose again.

In the final six games, UTSA's offensive output improved from 5.7 yards per play to 6.3; the defense went from averaging 5.8 yards per play to 4.9. The Roadrunners averaged 5.8 per play against a stout Tulane defense (even while only scoring 10 points) and allowed 4.5 per play to a surging North Texas offense. They whipped Tulsa in Tulsa and finished the season by pasting a Louisiana Tech squad that had beaten them by 24 points the year before. That tight loss to Rice was costly, but it's impossible to look at 2013 as anything other than a rousing success. 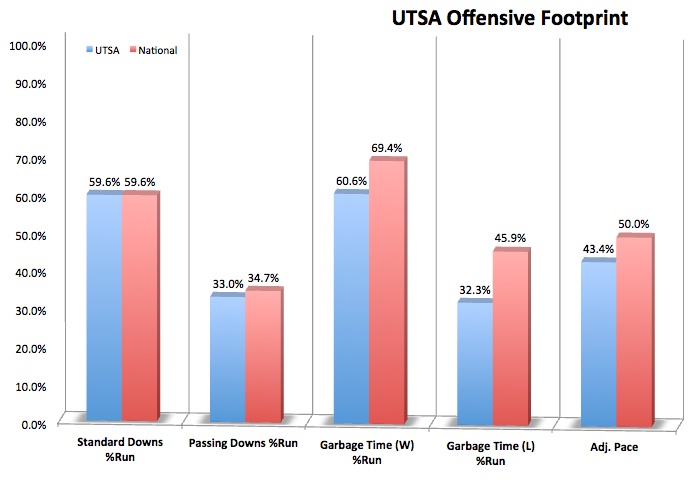 In UTSA's entire football history, Eric Soza has thrown 89 percent of its passes and thrown for 88 percent of its yards. He is, without either question or competition, the greatest quarterback in UTSA history.

Granted, that's by default. Aside from when he was limited by injury, he's been UTSA's only starting quarterback. Still, he was solid -- he completed 63 percent of his passes as a senior and added another efficiency aspect to an already efficient offense -- and his replacement has a reasonably high standard to meet.

Who will that replacement be? And what kind of offensive tweaks might UTSA implement? Despite Soza's solid mobility (he averaged 6.2 yards per non-sack carry as a junior, 5.3 as a senior), UTSA was balanced between the run and pass. The Roadrunners almost perfectly matched the national run-pass averages, and if the new winner of the starting job, be it senior Tucker Carter or redshirt freshman Austin Robinson, isn't quite as successfully mobile, it wouldn't be hard to see these run-pass rates becoming reasonably pass-happy. Carter, the most likely starter, completed 62 percent of his passes for 2,654 yards at Trinity Valley junior college in 2011, so he can sling it.

If the quarterback position is stable, then that answers basically the only lingering question about the offense.

Whoever wins the starting job at quarterback will have incredibly familiar options around him. Soza and tight end Jeremiah Moeller are officially the only two starters missing from last year's offense, and Moeller wasn't much of a target in the passing game -- the "returning starter" in that regard is Cole Hubble.

In all, every Roadrunner targeted more than 20 times in 2013 returns; the unit (hell, the offense as a whole) could use a bit more explosiveness, but efficiency matters, and players like Kam Jones (a meager 10.1 yards per catch, but with a 72 percent catch rate) have it.

Meanwhile, if David Glasco II can stay healthy, he could have a prolific season out of the backfield. Glasco and Brandon Armstrong have both shown potential for both efficiency and explosiveness in their respective careers.

There are a lot of options here; it will be interesting to see if younger options -- sophomore running back Jarveon Williams, junior receiver Kenny Bias, redshirt freshman receiver Aron Taylor -- play a bit more of a role, both because of potential and a need for proven experience in 2015 and beyond. But the seniors are proven and decent.

There are worse things in the world than returning your entire starting line and its entire second string. UTSA's line produced solid numbers in 2013 -- 43rd in Adj. Line Yards, 15th in Adj. Sack Rate. There are always extenuating circumstances with these numbers; quick passing helps the sack rate, and running backs obviously impact how well a line does its job. But these numbers were still among the best in the mid-major universe, and unless the numbers were all because of Eric Soza (probably not), there's no reason to think the numbers will regress much this fall, not with all-conference guard Scott Inskeep and seven other players with starting experience returning.

UTSA returns 143 career starts in all, which is just about as good as you'll ever see. 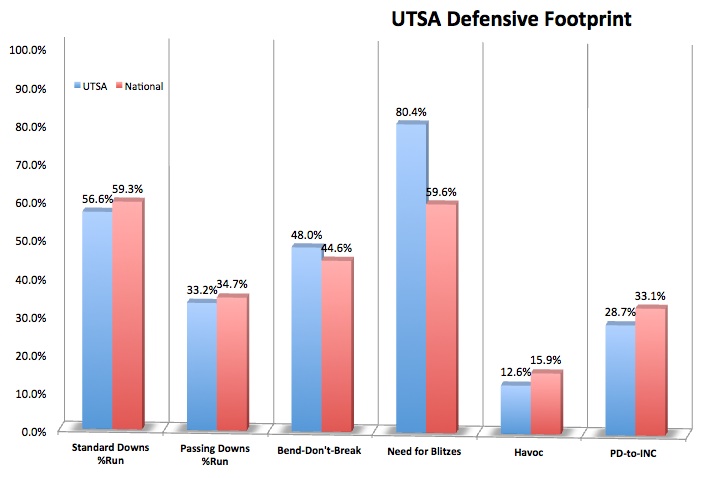 UTSA's offense was wonderfully efficient but lacked in the big-play department -- the Roadrunners ranked 28th in Success Rate+ (efficiency) but 103rd in IsoPPP+ (explosiveness). The defense had the exact opposite problem: 11th in IsoPPP+ but 96th in Success Rate+. UTSA was content to bend as much as possible on defense, prevent big plays, and hopefully stiffen in the red zone. It more or less worked. This style did no favors for UTSA's field position game, but it certainly helped UTSA to improve from 120th to 68th in Def. F/+.

That was one of the largest improvements you'll see, and virtually every reason for that improvement returns in 2014, from defensive coordinator Neal Neathery to a secondary that returns 12 of its top 13 tacklers.

Opponents passed slightly more frequently than the national average in 2013, and the S&P+ numbers above suggest why. UTSA swallowed up run plays with decent efficiency and spectacular big-play prevention. The Roadrunners allowed only six runs of greater than 20 yards; only Wisconsin (four) and Alabama (five) allowed fewer. They were pushovers in short-yardage situations, but you can typically afford to give up some third-and-2s if you're limiting the big stuff.

UTSA does have a few absences to account for up front. End Will Ritter was a decent play-maker against the run, and outside linebacker Steven Kurfehs led the team with six tackles for loss. But teams lose players like this every year; if this is your most pressing issue, you're doing pretty well. The top four tackers on the line and the rest of the two-deep at linebacker return. Depth could be an issue if injuries strike -- we know almost nothing about UTSA's linebackers outside of the three returnees.

It's a line I use pretty often; if a cornerback has a high ratio of passes defensed (interceptions and break-ups) to tackles, that either means he's not letting his man catch the ball or he's a terrible tackler. Usually it's more former than latter. Granted, UTSA was not as adept at preventing bigger pass plays as it was on the ground (42 passes of more than 20 yards, 69th in the country), but the Roadrunners still weren't terrible in that regard, and considering corners Crosby Adams and Bennett Okotcha defensed 20 passes while making only 50.5 tackles, that's a pretty encouraging sign.

UTSA's pass rush was pretty sketchy -- and unless redshirted JUCO transfer Justyn Eddins lights the world afire, that probably won't change much in 2014 -- but there's no reason to think that a secondary that returns its top three safeties and top five cornerbacks will do much worse. As a whole, the pass defense needs to improve more than the run, but there is playmaking potential here, especially at the cornerback position.

UTSA boasts 38 seniors in 2014. That's crazy. Not only has Larry Coker done a solid job in talent identification and development; he also hasn't really lost that many players to attrition. Even considering things are going pretty well, you'd have figured a few more players would leave in search for more playing time at some point.

Instead, UTSA is loaded with experience, familiarity, and leadership. This could all lead to some incredible regression in 2015, but that's a worry for another time. In 2014, UTSA could be absolutely awesome.

The early schedule is daunting; trips to Houston, Oklahoma State, and FAU loom, along with a visit from Arizona, and a good UTSA team could still start 1-3 or 0-4. But if the Roadrunners hit October with confidence intact, they might not lose again. None of the final eight opponents on the schedule (nine including FAU) are projected better than 88th -- UTSA avoids Marshall from the East -- and the Roadrunners could very well rip off a nice string of wins.

The road trip to Rice is a bit scary, as the Owls could still be pretty solid. But UTSA gets North Texas at home and could ride this senior class to a Conference USA West title in its second year in the conference and third in FBS. Again, this challenging job could get even more challenging in 2015 when the seniors leave, but Coker has done a magnificent job with this first cycle of players, and he could be rewarded handsomely for that in 2014.