How Bobby Petrino's return puts Louisville back on the attack

Cheer up, Louisville sports fan. Your football team is going to start scoring a whole lot of points. As soon as it finds itself a quarterback.

Share All sharing options for: How Bobby Petrino's return puts Louisville back on the attack

Former USC four-star quarterback Max Wittek has become a hotly prized transfer candidate for many programs. Although the three-year player failed to dazzle at USC and lost the starting job to Cody Kessler early in 2013, his powerful arm and pedigree have made him a big target for programs attempting to infuse QB talent into their systems.

Two of the offensive coaches eager to see Wittek arrive this summer include Louisville's former offensive coordinator Shawn Watson, now at Texas, and Louisville's new head coach Bobby Petrino. In essence, unless he opts to finish his career in paradise at Hawaii, Wittek will either be choosing to replace Teddy Bridgewater by embracing the future first rounder's position coach in Austin or by taking up his mantle in Louisville.

For Louisville, the departure of Bridgewater leaves a gaping hole that will have to be filled in order for Petrino to match the successes of Charlie Strong and the previous Petrino regime. For both Watson and Petrino, the QB is the maestro of the game and has to shoulder much of the burden for the offense's productivity.

In either system a prospect like Wittek could become the featured player, but the way each system asks its quarterbacks to win games are very different.

Because Strong was a defensive-minded coach, the team's overall strategy was designed to rely on the defense to win ball games. The main goals for the offense were to control the tempo, hold on to the ball, and convert efficiently in the red zone.

When Watson game planned, he was looking to impose Cardinal will a few yards at a time. The offense was designed to create leverage with motions and formational imbalance so that the quarterback could make a quick, post-snap read or the back could have an easy hole to hit.

You can see both at play in this series against UCF:

The Cardinals began the process by motioning their tight end and H-back from the boundary to the field and thus changing where the strength of the formation is and requiring the defense to adjust. They then moved the H-back around some more and caught UCF shifting its defensive line right at the snap.

With those motions, the Knights had to consider how to be sound against both the U of L run game as well as the quick passing game. The tight ends changed the numbers for the runs, but also meant new passing patterns became threats.

On this snap, the Cards just ran power to the strong side of the formation. Later, they motioned the H-back away from the tight end to again present a trips-receiver set to the field:

And then ran power to the tight end again, this time pulling both the backside guard and the H-back over before the defense can adjust.

Finally, they used motion to create an opportunity to throw one of Watson's West Coast passing concepts:

This is a concept much like levels, except that the No. 3 receiver can choose vertical route options based on the positioning of the safeties. He's not on the same page as Bridgewater here, and Louisville didn't revisit this concept against the Knights, although the Cardinals made heavy usage of it against other opponents.

There was a large burden on Bridgewater to consistently make the right reads and accurate throws in the quick game to control the ball, and Watson had a few different tricks to help him do it. One common tool was the rollout passing game:

Louisville ran this particular concept from multiple formations and often ran it off play-action. It's really simple. The QB rolls to the side of the formation with two receivers. The slot runs a quick out route, and the outside receiver runs a post or a curl route.

The quarterback reads the flat defender while rolling out. If he doesn't get wide enough to defend the slot's out route, the QB hits the out. If the flat defender widens, then that should open the passing lane for the curl route. In this instance Bridgewater gets the curl.

All these concepts together can form a very tricky combination for a defense to remain sound against. Will the formation unleash a power run to the running strength of the formation? Or will it be a play-action rollout? 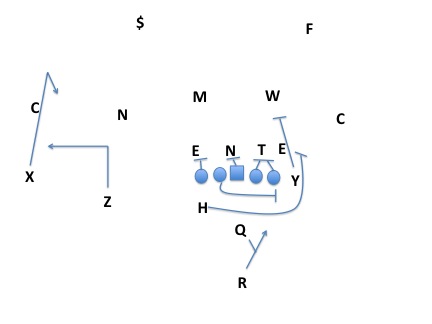 Or a quick hitting pass play to the passing strength? 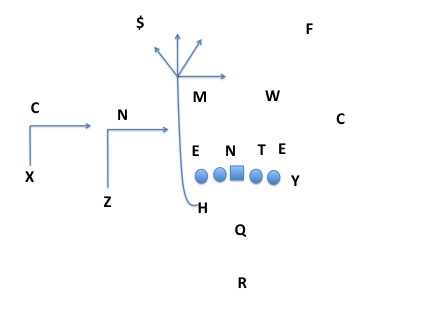 Before you know it, the offense is down the field, and you are attempting to stop these quick-hitters in the red zone with no margin for error.

There's an alternate universe in which Bobby Petrino changes the NFL. And yet there he was at Western Kentucky.

How can one man generate so many exceptional headlines?

Playing quarterback at Louisville under Watson was all about mastering the checks and calls at the line of scrimmage, understanding the defensive responses, and then quickly and accurately delivering the ball. Bridgewater ran the system perfectly and ripped defenses apart, but it wasn't a very aggressive attack.

There weren't a large number of vertical throws in the Card passing game, and many of them were touch lobs to receivers who broke their routes away from deep coverage. They weren't looking to blow opponents away but to stay on schedule and slowly accumulate points while their defense throttled opponents.

Bobby Petrino is an offensive coach. His team strategy for winning games is geared around his offense, so the tactics are more aggressive. He isn't looking to protect possession or efficiently snatch up yards. Petrino wants to attack a defense and break it into pieces.

However, like Watson, Petrino likes to accomplish this goal by using the tight end position. He even pulls guards in the running game more often than Watson does. The Cardinals will pull the frontside guard on a power sweep, the backside guard on power, or pull the center and a guard on the pin-and-pull outside run play.

They'll also pull their more mobile tackle on this variant of the power play, the dart:

This play has a wide assortment of blocking techniques. There's a down block and double team on the playside defensive tackle, the non-pulling tackle blocks like it's a draw, and on the backside the tight end and guard execute zone stretch blocks. The tackle leads through the hole like Power.

Petrino has two main aims with his running game:

There's one major exception to that rule, and it's found with what's perhaps the most devastating run game concept in the Petrino arsenal: the lead draw. Not just because of the run's effectiveness, but because of the play-action concepts that he'll attach to it.

Safeties aren't really built to turn and run back and forth like that.

In this instance there isn't  a lead blocker in the backfield. The interior offensive line on draw is usually more aggressive, while the tackles will drop back to simulate a pass before engaging with blockers and moving them wide to open running lanes.

Ideally, the following happens. The defense reads high hats (as in heads up high, signifying pass blocking) by the offensive line, so the defensive linemen fly upfield as the linebackers and defensive backs drop back to defend the pass. But then they see the run action and realize it's a draw, leading the linemen to fly back towards the line with haste to rectify their mistake. That's when receivers break free and the QB throws a deep bomb over the top. Safeties aren't really built to turn and run back and forth like that.

For all those complicated run schemes, Petrino is a passing game guru who wants to win games with his quarterback. The first essential building block of his offense is the shallow cross passing concept, which he has designed into a beat-all concept for the quarterback to master and have in his pocket at all times.

The challenge with the play is the lack of protection and the way it depends on the receivers and quarterback recognizing and beating blitzes with route adjustments.

This gets at the heart of another major difference between the Petrino and Watson offenses. Watson did as much as he could with motion and alignment to allow Bridgewater to make most of his reads before the snap. Petrino asks his quarterback to make several post-snap progressions on plays like shallow cross, and he often starts with his eyes on deep routes before coming back to shorter throws.

For the quick short pass over the middle to consistently work, the QB and receivers have to be able to threaten the downfield coverage. In the clip above the defense respects the vertical passing game. In this instance ...

... Petrino's Hilltopper quarterback is trying to throw a hitch route to the field side, a very long distance, against an SEC secondary. The trick with sending five receivers out into passing patterns and having progressions and checks against every potential defensive response is that the quarterback and receivers have to make the right reads, and they have to be able to execute the different progressions of the play, or else the entire concept is at risk.

If you ask your quarterback to go win the game for you, there's always the chance that he'll lose it.

When all these concepts are combined, it often comes in Petrino's favored 11 personnel formations, which include a single tight end and three wide receivers. There are multiple combinations that he'll utilize, but perhaps one of the more challenging options is a trips-closed alignment with the tight end alone on one end and the three receivers all aligned to the other side of the formation. In this look, Petrino can fire one of his endless variations of shallow cross at them: 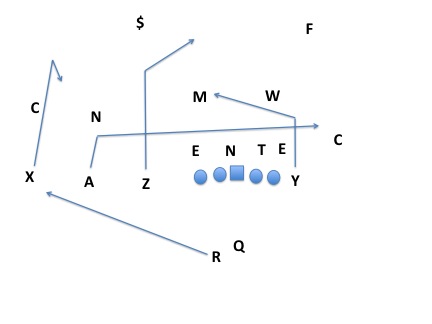 Or attack the weak side with a pin-and-pull or other run concept (shown here with the receivers running a bubble screen on the backside to hold pursuit): 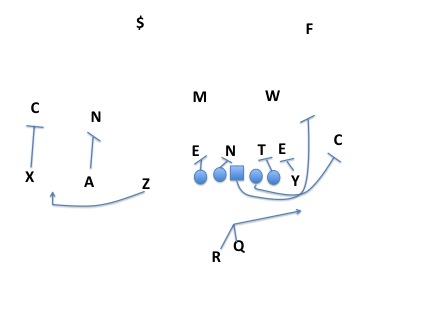 Either Watson or Petrino's offenses could be reasonably described as pro-style offenses. Both will mix in formations with tight ends and fullbacks along with spread out formations, and neither will be confused with the air raid or the spread-option. Both put a lot on the quarterback's plate to make everything fit together.

However, contrasting them reveals different approaches to attacking a defense and fitting into the larger team strategy of winning games.

Although it's strange to say about a team whose best player was its quarterback, the Cardinals are looking at a steady evolution into becoming an offensive-oriented team. Now Petrino just needs to find the next great Louisville quarterback.