Southern Miss lost 25 games in five years, then lost 23 in two. The Golden Eagles are officially starting from scratch, and while improvement is almost guaranteed, Todd Monken's squad has a ways to go.

Share All sharing options for: The big 2014 Southern Miss football preview: Still picking up the pieces

We say it a lot when we're talking about projections in college football: the biggest clue for how you will play in the future is how you've played in the past. That's not exactly profound, and it's more or less the case for any sport, but status doesn't change much in college football. And when it does, it tends to revert to form pretty quickly.

And when you're the most consistent program in FBS, this isn't supposed to happen:

You know the details by now. Lord knows I mention them in some context every year. Under Jeff Bower (until 2007) and Larry Fedora, Southern Miss finished above .500 every year from 1994 to 2011. Over the course of an 18-year span, the Golden Eagles won six games three times, seven games seven times, eight games three times, and nine games four times. Winning seasons were redundant and always accompanied by a thirst for just a bit more. Jeff Bower was pushed out after three seven-win seasons in four years, and his successor, Larry Fedora, went 7-6, 7-6, and 8-5 in his first three years.

The consistency was admirable, but there was never any sort of major breakthrough. Or at least, there hadn't been since 1999, when USM finished 9-3 and 14th in the AP Poll.

In 2011, Southern Miss got its breakthrough, finishing 12-2 and winning Conference USA.

Fedora left for North Carolina after 2011, but while USM had a pretty heavy senior class that season, it still seemed as if there were quite a few pieces left over for new head coach Ellis Johnson in 2012. Regardless, the Golden Eagles' 18-year win streak ended with a zero-win season.

And in 2013, the team got even worse. Todd Monken took over for Johnson and saw his team suffer quite a few crippling injuries and go even more drastically young than expected. Southern Miss was truly awful for most of the first two months of the season, and though the team improved late and finished with its first win in almost two years, the Golden Eagles actually ranked even lower in 2013.

There's hope in the simple fact that the team was absurdly young and will feature a lot more experience this time around. But the significance of this fall is still stunning. Southern Miss is the Pheidippides of college football, achieving an almost incomprehensible feat of stamina and consistency, proclaiming "We have won," then collapsing and dying on the spot.

For each conference in this preview series, I preview teams from worst to first according to five-year F/+ rankings. Since I'm not in position to make any sort of prediction until I'm done with all of the previews, I figure five-year history is a nice, neutral way to cover teams in approximate order of program health. And it works perfectly fine most of the time. For the MAC, it meant starting with UMass and Eastern Michigan and finishing with Toledo and Northern Illinois. For the Mountain West coming up, it means starting with New Mexico and finishing with Boise State.

For Conference USA, however, it means absolutely nothing. Here's what five-year history produces for us in terms of C-USA rankings:

3. At least it ended on a high note

You might have to squint a bit to see it, but USM did improve over the final month of the season.

A young offense got slightly more experienced, and a young defense stabilized at least a little bit after allowing 9.9 yards per play to Marshall.

And after trailing UAB, 21-13, at halftime, the Golden Eagles unleashed two seasons of frustration with a nearly perfect half of football, outscoring the Blazers by a 49-6 margin in the second half and winning their first game since the 2012 Hawaii Bowl. One game does not a turnaround make, but it was the first reason for positivity in quite a while. Better than nothing. 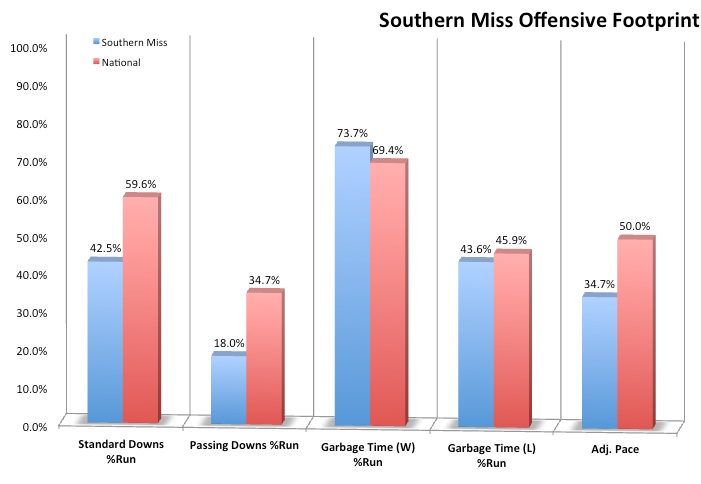 4. The big plays were pretty big (and scarce)

Southern Miss threw an incredible 26 interceptions in 2013; the only team within three of that total was Washington State, and the Cougars threw 271 more passes than the Golden Eagles. Southern Miss averaged 4.6 yards per play with a 34 percent success rate against a rather weak set of defenses. Average halftime score: Opponent 26, Southern Miss 7.

There are a lot of ways to say the offense was really bad, in other words. But if you look hard enough, you can find some big-play potential. IsoPPP basically measures the magnitude of a team's successful plays -- it's an explosiveness measure for only the good plays -- and while Southern Miss produced almost no big plays, the Golden Eagles ranked 30th in IsoPPP. Nine receivers caught at least one pass of 30 yards, while four running backs had a carry of at least 25. With better scheme, experience, and consistency, there might be some athleticism that can shine through.

Experience will take care of itself, but the task of scheme goes to first-year offensive coordinator Chip Lindsey, who spent 2011-12 as the head coach of Spain Park High School in Alabama and spent 2013 as an offensive analyst for Gus Malzahn at Auburn. After a year with a "power rushing in a spread set" boss, he inherits an offense that passed first and passed second last fall.

Nick Mullens completed 51 of 86 passes (59 percent) for 659 yards, eight touchdowns, and three interceptions in his final two games as a true-freshman starter last fall. Receiver Markese Triplett averaged almost 10 yards per target and caught 10 balls for 169 yards in those last two games. Some jobs might be safer than others.

But Mullens could get a push from any number of newcomers this spring and fall. Triplett and sophomore wideouts Tyre'oune Holmes, Marquise Ricard, and James Cox could easily get passed by youngsters like D.J. Thompson (who missed 2013 with injury) or JUCO transfers. And neither of Southern Miss' leading returning rushers, Jalen Richard or George Payne, looks infallible. This is a spring of opportunity for Southern Miss' skill position players. There are reps to be won.

6. The line simply must improve

When you've got a freshman quarterback, you're going to give up sacks, because his pocket presence probably isn't very well developed. When you've got sketchy running backs, your run-blocking stats aren't going to look very good, because they might not take advantage of the blocks you deliver. Of course.

But when you rank 125th in Adj. Line Yards, some of that is almost certainly on you. We won't know for sure what change Chip Lindsey intends to bring to the table in 2014, but at some point or another, USM is going to run the ball, and it needs to work infinitely better than it did last season.

Improvement is in no way guaranteed, however. Southern Miss finished 2013 with 10 players with starting experience, but only five of them return. New blood could be a good thing, and JUCO transfers Norman Price and Thomas Collins will have every opportunity to work into the rotation, but the Golden Eagles return just 36 career starts up front, one of the lower totals in the country. It probably won't get any worse from a run-blocking perspective, but it might not get a lot better. 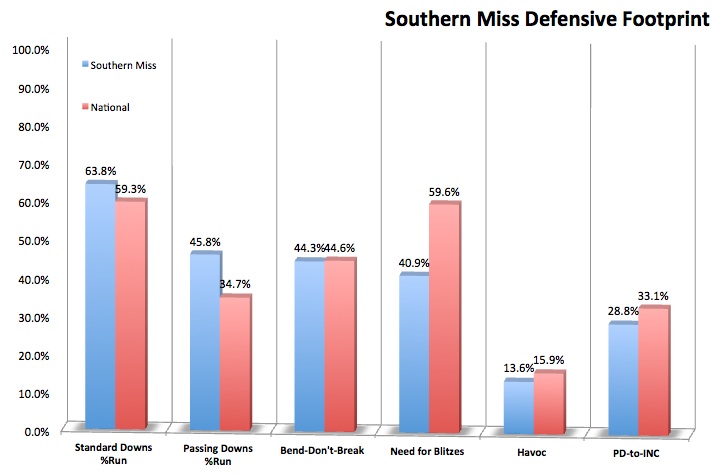 Southern Miss had a pretty good run defense and a pretty awful pass defense in 2013. But opponents ran the ball constantly anyway. It played to the Golden Eagles' strengths (in air quotes), but it didn't matter because the offense was so hopeless.

Run defense could be a strength again, and this time without the air quotes. Two of the top three defensive tackles return, not including former star recruit Dylan Bradley, who moves from undersized tackle to big end. Plus, Rakeem Nunez-Roches returns after missing last season with injury. Lanky end Dasman McCullum made quite a few big plays last fall (while failing to do much in terms of mundane plays), and a trio of three-star redshirt freshmen are available this year as well. At linebacker, Alan Howze returns after a medical redshirt -- he was on pace for 78 tackles and more than 10 tackles for loss before getting hurt last year -- and joins a pair of players who more or less held their own last year (Terrick Wright and C.J. Perry).

Of course, Southern Miss will still need a pass rush. Last year's wasn't very good. But if the Eagles can simply force opponents to pass, that's a step in the right direction.

Of the five leading tacklers in the secondary last season, one was a freshman and three were sophomores. Southern Miss was pretty decent at attacking the line of scrimmage with its SPUR safety -- the three players listed as SPURs above combined for 12 tackles for loss last year -- but the combination of youth and a non-existent pass rush was, shall we say, unfavorable for USM. Again, opponents were content to run, but they could still pass when they needed to, completing 66 percent of their passes, albeit at only 11.9 yards per completion.

With any help from a pass rush, the defensive backfield could improve quite a bit in 2014, not only because of experience, but because of the return of Jacorius Cotton from academic issues. Cotton is a big-hitter and another potential play-maker, and with just a little bit of extra pressure on the quarterback, USM's pass rankings should rise.

9. Hope in the return game

Free safety Emmanuel Johnson and running back Jalen Richard were inconsistent in 2013, but they showed significant potential in the return game, albeit in a small sample. If they can provide above-average returns and Corey Acosta is given a reason to kick off a few more times (Southern Miss' kick coverage was quite strong), then the Golden Eagles could do pretty well in the field position game. Acosta wasn't much of a place-kicker -- he missed six of 14 field goals under 40 yards -- but you have to worry about creating opportunities before you worry about converting those opportunities into points. Field position helps with that.

The receiving corps and most of the defense is deep and potentially athletic, the offense isn't going to be worse (it almost can't be), and the defense could develop into an actual strength to some degree in 2014. By default, Southern Miss should expect to improve this fall, but while one year could be considered an aberration, you don't sink as far as the Golden Eagles have in the last two years and expect to rebound quickly.

That there are only four teams on the schedule projected worse than 100th suggests that improvement could result in only three to four wins, but that would still be three to four times more wins than they have managed since Larry Fedora left. The 18-year win streak is very much in the rearview mirror, and it's time to start building from scratch.