Kent State's win total dropped from 11 to four in 2013, and now the Golden Flashes must replace a couple of truly unique, talented stars. Depth is decent, however, and if they withstand a brutal early schedule, they could approach bowl eligibility.

Share All sharing options for: The big 2014 Kent State football preview: The MAC Mad Libs team of the year

1. Looking back up the hill

Each spring, I spend about three weeks previewing MAC teams. Inevitably we end up discussing the MAC life cycle, in which a once-downtrodden conference program is lifted up by a strong coach, who breaks through with a big year or a conference title, then either leaves or falters, leaving the school to start over again. Miami (Ohio) calls itself the Cradle of Coaches, but that really goes for the conference as a whole.

Money and prestige are equal for most MAC schools, and winning means recruiting the right low-two-star recruits (the ones destined for stardom, even if nobody knows it at the time), getting slightly ahead of the game tactically, and crafting a team that makes the fewest mistakes. The margin for error is minimal, both in terms of the execution on the field and the hiring of the right up-and-coming coach.

And as I inevitably say at least a couple of times each spring, a team's reward for making the right hire and winning some games is getting to make another hire. This year's MAC Life Cycle fill-in-the-blank gets filled in by the good folks in Kent, Ohio:

In [2011], [Kent State] hired [Darrell Hazell], who broke through in a way that previous coach [Doug Martin] could not. The [Golden Flashes] showed promise in [Hazell's] first year, then erupted in his second, starting the season [10-1] and reaching the MAC title game before they [lost to NIU]. [Hazell] was hired away by [Purdue], and the [Flashes] were forced to start over again, especially when stars [Dri Archer and Roosevelt Nix] graduated as well.

Sometimes you get lucky and find a replacement who is just as good. NIU is atop the MAC heap at the moment because the Huskies not only found Jerry Kill, but also found Dave Doeren to replace Kill and Rod Carey to replace Doeren. Now they have to replace ace quarterback Jordan Lynch as well. Toledo seems to have done a strong job in replacing Tim Beckman with young Matt Campbell.

Others aren't as lucky. CMU replaced Brian Kelly with Butch Jones and kept winning with star quarterback Dan LeFevour behind center, but Lefevour and Jones left, and Dan Enos has gone 19-30 in four seasons. Poor Miami (Ohio) found Mike Haywood to resurrect a flagging program, but he left after a second-year MAC title, and the RedHawks have gone 8-28 since. Ball State reached 12-1 with Brady Hoke, lost him to San Diego State and went 6-18 with Stan Parrish, then replaced him with Pete Lembo and won 19 games in 2012-13.

It's a roller coaster. And after a thrilling 2012 campaign, the Golden Flashes are back at the bottom of the hill.

2. Unique talent out the door

There was a particularly cruel element to Kent State's 2013 tumble: the stars had actually stuck around for another year.

On February 3, 2009, Signing Day, Dri Archer committed and signed to Doug Martin's Kent State Golden Flashes; an all-purpose back from Venice, Fla., Archer was given the lowest two-star designation by Rivals.com and was a mostly under-the-radar signing for a class that did not exactly blow people out of the water. Almost 10 months later, on November 24, Roosevelt Nix, a 5'10, 237-pound defensive tackle from Reynoldsburg, Ohio, committed as well. He had 35 tackles for loss as a senior, sure, but he was a 237-pound defensive tackle. A mid-two-star recruit, he was one of the more highly ranked members of Martin's final recruiting class.

In the end, these two nondescript signees did as much as Hazell in turning the program around. Nix became a 250-pound force at DT, logging 63 career tackles for loss and leading the team in the category for four straight years. He had 20 as a true freshman, then just kept on making plays as the talent around him waxed and waned.

Archer, meanwhile, was the headliner. He racked up 477 yards and four scores and proved a threatening kick returner as a true freshman and played a bit role in 2010, Martin's last season. After a redshirt year in 2011, however, he erupted for 1,990 rushing and receiving yards and 20 touchdowns and returned three kickoffs for scores. He battled through injuries as a senior in 2013 but still managed 854 combined yards, 10 touchdowns, and a return score. In 2012-13, he averaged a patently absurd 8.6 yards per carry; defenses knew he was going to touch the ball, and they couldn't stop him. And then he went to the NFL Combine and ripped off a 4.26-second 40-yard dash.

Even with these breakthrough seniors, Kent State slumped to 4-8 and its worst F/+ ranking since 2005. Now Paul Haynes has to figure out what to do without them.

As poorly as the 2013 season went -- and to be sure, a drop from 11 wins to four qualifies as "poor," no matter what -- it bears mentioning that the worst came at the start of the year. Kent State was truly awful in September but improved dramatically on both sides of the ball in October, then shored up the defense a bit more in November. Tight road losses to Ball State and Akron ensured that the Golden Flashes would not be bowling, but their level of play late was above average, even if the below numbers are a bit falsely boosted by one phenomenal performance against Ohio.

If the players responsible for November improvement return, that late improvement can be sustained. And while the two biggest stars (Archer and Nix) are gone, Haynes does return 13 starters overall. The star power has taken a hit, but the decent depth could end up paying off. 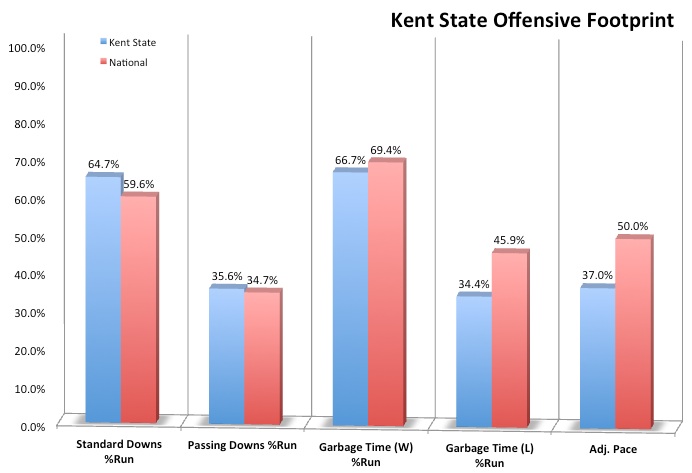 When you hand your team over to a freshman quarterback, you knon you're probably going to get some pretty impressive variance even if he does well. Colin Reardon was certainly not immune from such variance, and Kent State's fate was to some degree dictated by his own performance.

Reardon's full-season numbers weren't too impressive, but he did thrive in a way that could mean good things in the future: he made plays on passing downs. He showed some decent scrambling ability, and he was often able to find receivers like Chris Humphrey (who averaged a decent 7.2 yards per target despite nearly two-thirds of his targets coming on passing downs) and tight end Casey Pierce to move the chains after falling behind schedule. Passing downs conversions are a sign of poise and good decision-making, and Reardon's play on such downs was encouraging.

Kent State's problem, however, was that Reardon was asked to pull passing-downs rabbits out of his hat too frequently. Kent State's was a run-first offense that couldn't run the ball very well; big plays were too few and far between to account for the complete lack of efficiency on the ground. Coming through on passing downs is great, but you can't expect even really good quarterbacks to succeed at any grand level if they're too frequently in second- or third-and-long.

6. Thunder with no lightning

Humphrey and Pierce return in the receiving corps and are joined by an exciting batch of redshirt freshmen. Plus, while the line has to account for the loss of two two-year starters, it still returns five players with starting experience (45 career starts) and actually did a decent job of keeping defenders out of the backfield while running on standard downs and passing on passing downs. Reardon's supporting cast outside of the backfield should be decent.

But his biggest asset in the battle to avoid second-and-long is the guy next to him in the backfield, Trayion Durham. For two years, Durham was the thunder to Archer's lightning, and he played the role particularly well in 2012. But with Archer limited to 68 carries last season, Durham was unable to pick up the slack. He showed minimal explosiveness, and while a big back can do just fine without 80-yard runs, his Opportunity Rate (percentage of carries gaining at least five yards) was also far too low for him to be effective. 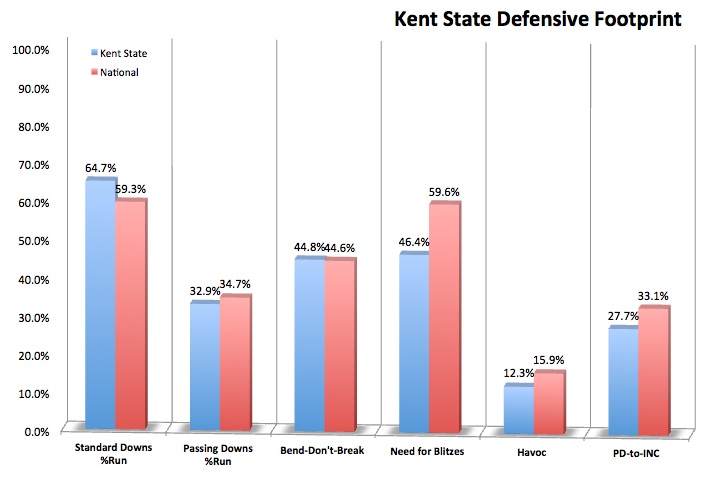 7. For better and for worse, the line starts over

For years, Kent State's defensive front somewhat took on Roosevelt Nix's identity -- small but fast, likely to get pushed around but likely to spend a decent amount of time in the backfield as well. This comes with obvious advantages and disadvantages, but whereas Kent's offense regressed a bit in 2013, the defensive performance flagged rather significantly following the loss of two starters on the line (edge rusher Jake Dooley and nose Dana Brown, Jr.) and two at linebacker (including leading tackler Luke Batton). Without stalwarts around him, Nix's production suffered a bit, and the line spent a lot more time getting pushed around than getting into the backfield.

The pass rush still ranked in the nation's top 50 last fall, but it fell from 11th in Adj. Sack Rate in 2012 to 45th. The ability to stand up to run blocking, meanwhile, disappeared. If Kent State could leverage you into passing downs, the Flashes were able to make some plays. But those opportunities were few and far between because the run defense was lacking, to put it kindly.

Everything starts over this fall. Four of the top five up front are gone, including Nix. In their place is a more regularly sized lineup (Chris Fairchild certainly lends some heft to the nose tackle position, at least) that is almost completely devoid of proven play-making ability. Nate Terhune had an all-or-nothing fall, making just 12.5 tackles but logging more than half of them behind the line. But the end position is an enormous question mark.

8. Depth, in case that matters

Outside of the line, the depth situation looks a lot more encouraging. Four of the five linebackers who made a tackle last year return, as do three of the top four safeties in coordinator Brian George's adjustable 4-2-5 alignment. The back seven hosts many of Kent State's more highly-touted recent recruits, and there is both experience and potential in this group. But it won't matter unless the line gets its act together.

Technically, Dri Archer was Kent State's best offensive player in 2013, even if he was limited by injury. But punter Anthony Melchiori might have done more favors to the offense with his punting -- his nearly 45-yard average, with frequent fair catches and downed punts deep in opposition territory, made up ground in the field position battle after a few too many three-and-outs -- than Archer did with his legs. He wasn't much of a place-kicker, but that could come. He returns, and as sad as it might be to say, he should get plenty more opportunities to ply his punting trade.

On Tuesday, we previewed a Buffalo team that plays just two teams projected better than 100th in the country. Kent State, meanwhile, plays six such teams, five of which are projected 63rd or better. This is a brutal schedule by MAC standards, and it could severely limit the rebound of a team that really did show some growth late last year.

The first five games are key; the Golden Flashes could legitimately start 0-5 (1-4 is perhaps most likely), but if they maintain their confidence after consecutive road trips to Ohio State, Virginia, and Northern Illinois, they could find plenty of wins on the back end. Early wins over Ohio and South Alabama are vital to a bowl bid, but if they can just get back to four or five wins after losing quite a bit of star power, that will be a sign that Haynes might have some good years in him moving forward.