The Dan Enos era will not be one of mystery for much longer. The Chippewas return about as many starters as any team in the country, including a star at wide receiver. Can they take advantage and crack .500 again?

1. This is not a happy trend

Last January, following Central Michigan's first bowl bid in three years, the school gave head coach Dan Enos a contract extension. This is obviously common practice, but it followed a season in which CMU was basically of the same quality as the Chippewa teams that went 3-9 in 2010 and 2011. They went 3-0 in one-possession games to reach 7-6 and knocked off Western Kentucky in the Little Caesars Bowl, but the program as a whole didn't seem to be improving all that much.

Enos came to Mount Pleasant following the departure of all-forever quarterback Dan LeFevour, and some regression was expected. Indeed, CMU fell from 38th in 2009 to 94th, 98th, and 95th in 2010-12. But instead of beginning to improve in 2013 as I thought they might, they got worse, especially early. Injuries played a role, and again the lines were devastated by graduation and attrition. But Enos ended up playing an incredibly young team last fall, younger than originally intended, and took his lumps.

This year, there is enough experience that improvement is all but guaranteed. But does "improvement" mean jumping back to that No. 90-100 range? Is there enough talent here for Enos to build something a little greater than that? It's hard to say, but the Chippewas' quarterback is interesting, there is some explosiveness at the skill positions, and at the very least the defense is experienced.

Whatever CMU is capable of becoming under Enos, we'll start to see it in 2014.

3. An atrocious first half

Among all the reasons for encouragement in 2014, one of the most prominent is simple: CMU's full-season numbers don't tell the tale of where the Chippewas were at the end of the season.

Over the first six games of 2013, there might not have been a worse team in the country than CMU. (Okay, that's not quite true, but CMU was certainly among the bottom 10.) The offense lost running back Zurlon Tipton early on and averaged better than 4.9 yards per play just twice in six games -- 6.7 against FCS New Hampshire and 5.7 against Toledo. In games No. 3-6, redshirt freshman Cooper Rush completed just 50 percent of his passes with three touchdowns to eight interceptions and a sub-100 passer rating. The running game was hit or miss. And the defense, a serious liability in 2013, wasn't really any better in 2014. This was a bad, bad team.

Freshman Maurice Shoemaker-Gilmore added a burst of explosiveness to the run game, Saylor Lavallii went off, Tipton returned, Rush got steadier, and CMU averaged at least 5.6 yards per play in four of its six final games. Meanwhile, the defense was still below average, allowing 7.1 yards per play to NIU and 7.5 to Ball State, but it got a better grip on the lesser offenses. CMU creeped by WMU, then pummeled UMass and EMU to reach 6-6.

As I've written many times through the years, improvement over the second half of a season can be sustainable if the reasons for the improvement return. Well ... CMU returns 18 starters, and Rush is no longer a redshirt freshman learning on the job. Good signs all around. 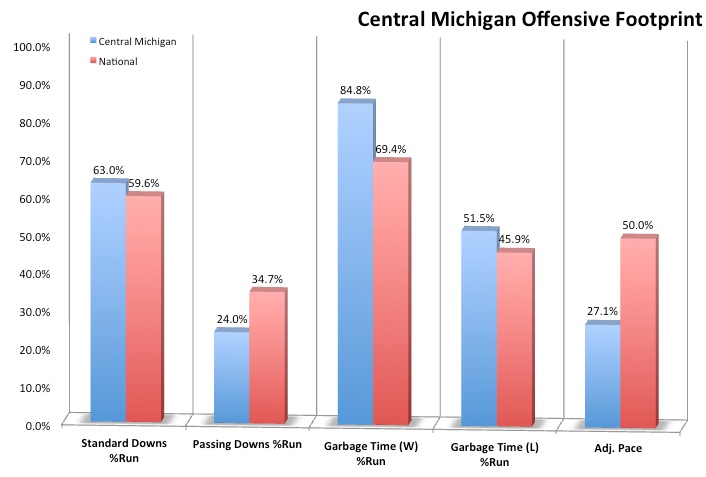 4. Head-first into the deep end

CMU's season-opener against Michigan was damaging in all sorts of ways. The Chippewas lost by 50, Tipton broke his ankle, and starting quarterback Cody Kater broke his collar bone. Backup QB Alex Niznak didn't fare very well, and a week later, Cooper Rush was given the job. Instead of a junior and a senior in the backfield, CMU went with a redshirt freshman (Rush) and a sophomore (Saylor Lavallii). If you're wondering why CMU's offense was so awful over the first half of the season, that's a pretty good place to start.

Rush went through plenty of growing pains, as one would expect of a youngster who went from third-string to first-string in a short amount of time; he was sacked once every 13 pass attempts, and he threw interceptions once every 20 passes. But he was also responsible for some huge gains on passing downs, and the composure and play-making ability it takes to rank eighth in Passing Downs PPP+ (even while ranking 124th in Standard Downs PPP+) is intriguing for a redshirt freshman.

Rush is in no way assured of the starting job in 2014. Kater is back and healthy, and Enos brought in JUCO transfer Ryan Lamb for competition as well. But his development could be interesting to watch over the next three years. With little to no run help and constant second- and third-and-longs (downs in which Rush was constantly asked to make plays with his arm with little help from draw plays and other runs), Rush made some things happen. That could say good things about 2015 and 2016, even if his development is still ongoing in 2014.

5. Big plays at the skill positions

Tipton has graduated, but in Lavallii and Maurice Shoemaker-Gilmore, CMU has two running backs with solid big-play ability and more experience than they were expected to have heading into 2014. (Bill's Go-To Saying No. 14: Injuries hurt in the present tense and help in the future tense.) They need to improve between the tackles, but this position has potential.

Meanwhile, there isn't just potential at wideout -- there's proven production. Titus Davis has caught 144 passes for 2,720 yards and 24 touchdowns in three seasons at CMU; he is potentially the best big-play receiver in the mid-major ranks, and "Just throw it up to Titus" was a rather effective gambit on passing downs.

Where CMU needs to improve, however, is in the mundane. The tight end position was utilized relatively frequently on standard downs but didn't actually accomplish much. X-receiver Courtney Williams combined a poor 10.9 yards per catch with an even poorer 46-percent catch rate. The quarterback of choice will need to find some reliable underneath options, be they seniors or redshirt freshmen. If CMU can get better closer to the line of scrimmage, the Chippewas could reap the benefits of having guys who can go deep. We'll see how new offensive coordinator Morris Watts, promoted after Mike Cummins left for UConn, handles the run-or-pass situations.

CMU produced the No. 1 player in the 2013 NFL Draft; tackle Eric Fisher anchored a line that ranked 76th in Adj. Line Yards and 34th in Adj. Sack Rate. Not only did he depart after 2012, but so did three other multi-year starters on the line. The line was forced to start over, and as you see from the rankings above, it didn't fare well.

From a recruiting standpoint, CMU has done well in the trenches; tackle Kevin Henry is a former three-star signee, a pair of well-touted redshirt freshmen (Derek Edwards and Jack Ford) could join the rotation this year, and another three-star true freshman (Shakir Carr) joins the team as well. The ceiling here is potentially high, especially when you consider that there's quite a bit of experience here (90 career starts). But how long will it take to reach that ceiling? Last year's line needed to help out its young quarterback and running backs and couldn't. 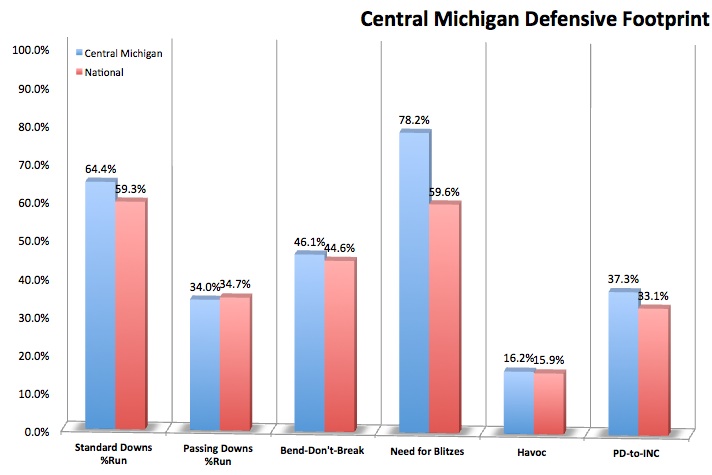 As mentioned, the CMU offense was good at big plays but failed at the mundane plays in 2013. The defense was in the same boat; the Chippewas were perfectly decent in terms of bringing players down in open space and preventing major damage from big plays. But for the life of them, they couldn't prevent opponents from gaining six yards at any point. CMU was 124th, third-from-last, in terms of rushing efficiency, and 104th in passing efficiency. The defense actually pulled off a nice combination on passing downs -- good sack rate and minimal big gains. That can be very useful, but only if you actually create passing downs in the first place. They were few and far between in 2013.

In middle linebacker Justin Cherocci, end Blake Serpa, and on occasion, safety Avery Cunningham, CMU was indeed able to get relatively creative and aggressive in passing downs pass rush. But again, that only matters if you leverage teams into passing downs, and a line that had pretty decent size got pushed around far too much. Linebackers Cherocci and Shamari Benton combined for 20 tackles for loss (14 of the non-sack variety), and monstrous nose tackle Leterrius Walton added another 9.5, and CMU still ranked 121st in Adj. Line Yards.

Walton, Serpa, and almost everybody else returns up front. We'll see if that's a good thing.

Benton and Cunningham are gone, but in Cherocci, CMU returns a senior leader who appears to be both steady and exciting. Middle linebackers don't frequently lead the team in sacks, and it's not necessarily a good thing when they do (it could say quite a bit about the quality of the edge rushers), but Cherocci did just that. There is almost no proven depth at linebacker, but Cherocci is a proven entity.

If experience on the line turns out to be a good thing, then Cherocci and a secondary that returns almost everybody (including four players who defensed at least five passes each) could assure that CMU not only makes some plays but does just as well in preventing them in 2014. It's all up to the line.

CMU returns quite a bit in 2014. Granted, it's quite a bit from a team that nearly drowned over the first half of 2013, but the Chippewas did survive that rough patch and finish reasonably strong. Titus Davis is a true star, and players who were too inexperienced and raw to play consistently well in 2013 (Cooper Rush, Saylor Lavallii, Maurice Shoemaker-Gilmore, receiver Andrew Flory, Justin Cherocci, Leterrius Walton, Blake Serpa, most of the secondary) could improve quite a bit this fall.

I've been pretty down on Enos' tenure overall, even as he was engineering a bowl bid in 2012, but his 2014 squad will have more experience and play-making ability than any other he's had. Throw in a cakey November slate, and there's certainly potential for another hot finish and bowl bid.

In the end, however, if CMU is going to make anything of the first two months of the season, and therefore give itself a ceiling higher than 6-6, it's going to depend on improvement on the line. The offensive line needs to begin living up to recruiting hype, and the defensive line needs to prevent the same kind of gashing it suffered last year, even while making some plays here and there.

Again, whatever Enos is going to create out of this program, we're going to see it developing quite a bit in 2014. I don't know if that's an encouraging or discouraging statement.