How will Michigan's new offensive coordinator bring the physicality of Saban's Alabama offense to the downtrodden Wolverines? The plan is straightforward.

Share All sharing options for: Focused power: How Doug Nussmeier will simplify and fortify Michigan's offense

When Brady Hoke came to Michigan as head coach in 2011, he was on a mission to restore the program's prestige after the lackluster Rich Rodriguez era. His plan for doing so involved restoring the classical strategies of the Michigan men that he grew up watching in Ohio and had seen while coaching there under Lloyd Carr. Namely, to control the line of scrimmage and then destroy people with the passing game.

Hoke appears to have had a three-step process for restoring the Wolverine tradition:

Step one: Re-establish the Wolverines as a major player in Michigan's classical recruiting grounds in Indiana, Michigan, and Ohio while cherry-picking nationally. It's important to this staff that it builds around Midwestern kids who understand the tradition, rivalries, and weather. They've been successful in landing such players, with top recruiting classes in each of Hoke's seasons.

Step two: Rebuild the defense into a dominant unit that keeps the team in games. Rich Rodriguez failed to field a defense that ranked higher than 41st in Defensive S&P in three seasons. Other than a blip in 2013, the Michigan D has moved in the direction of being one of the league's better units.

Step three: Transition to a tough, pro-style offense that matches the toughness of defense and controls the line of scrimmage. Rich Rod's newfangled spread designs were to be tossed aside whenever possible in favor of balanced attacks that reflected the traditions of the past.

Besides Michigan's defensive struggles in 2013, step three has been the major stumbling block for the Hoke era. After Hoke and offensive coordinator Al Borges began the transition from the spread towards a more pro-style approach towards the end of 2012, the Michigan offense stumbled to a halt and cratered in key games. The 2013 Michigan State rivalry game was the low point, in which the Wolverines finished with negative-48 rushing yards.

The biggest challenge has been running the football without the benefit of Denard Robinson or spread schemes. Michigan simply couldn't use its running backs against good teams in 2013, with its top two backs averaging 3.4 yards per carry on the year. The interior offensive line was comprised of underclassmen that ultimately produced a lineup featuring two true freshmen and a true sophomore. 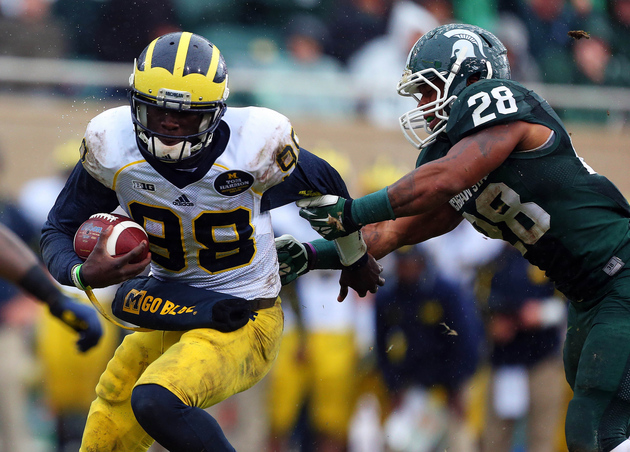 Too often, Michigan's only run-game solution has been to hope its quarterbacks can take a lot of hits. Mike Carter, USA Today

Borges' offensive system is one that is fairly complex. It involves a massive collection of plays designed to take advantage of a defense at critical times. The Michigan OC excelled at setting up defenses for devastating play-action passes after noting their overplays of other concepts. Borges' particular methods for doing this also involved a fairly sizable number of overall concepts.

For example, the Michigan offense involved six primary run schemes: power, iso, draw, horn (a tackle lead play), inside zone, and outside zone. It's worth noting here, just for comparison, that NFL run-game guru Alex Gibbs believes that a ground attack should be built almost entirely on just inside and outside zone.

Your team is going to win more games than anyone expects this year. Yes, this goes for all of you.

Borges' run game for his baby-faced interior line involved those two schemes plus four others. That's a lot of footwork, technique, and reads for the players to master in any of those concepts. Consequently, the Michigan run game faltered and often failed to set up the team for play action. In fact, Devin Gardner frequently executed a play-fake to the running back only to turn and find not a wide open receiver in his sight lines, but several defenders in his face.

That's to say nothing of all the pass protection schemes that Michigan's linemen were asked to master and failed to nail down. That's how Borges took a team with a mobile upperclassman at quarterback, a fantastic receiver in Jeremy Gallon, an uber-athletic 6'5 receiver in Devin Funchess, and two offensive tackles that the NFL will draft in a few months (including first-rounder Taylor Lewan) and built a team that gave up nearly three sacks a game.

His system put major stress on the weakest parts of his team. His attempts to problem solve revealed further flaws in his napkin-domination approach to the game. Michigan switched between primary run schemes on a regular basis, moved young linemen to different positions, and integrated new formations and plays every week, rather than building an identity for the team to become comfortable with.

The offensive performances became more and more uneven down the stretch, and his array of clever traps for defenses fell flat when the set-up attempts put Michigan behind the chains. Hoke fired Borges in January.

The former Alabama coordinator is walking into a situation with arguably fewer advantages than Borges had. While Gardner returns and Michigan's younger weapons gain a year of experience, the starting line could end up as follows:

That lineup would make for 31 career starts -- Lewan alone entered last season with 35 starts, and he had a two-year starter for a bookend in Michael Schofield. This means a lot of youth and overall inexperience in a season in which Michigan will be expected to make big improvements or risk Hoke's job status.

Fortunately for Michigan fans, the Nussmeier offense is different than the Borges system in design and deployment.

The run game will remain committed to the same concept from week to week.

Much of the big-picture philosophy will remain the same. Nussmeier is going to look to bring a pro-style approach that involves tight ends, a power run game, and some more advanced pass-game concepts to the Wolverine offense. However, the way that system is installed and executed will differ.

The run game will likely be built around inside zone and remain committed to the concept from week to week. Whereas Borges would build a million different constraints and play calls around multiple different run and pass schemes, Nussmeier will run inside zone in multiple ways, from multiple formations, and with different constraints built off of it to counter defensive responses. At Alabama, players would rep inside zone against every single defensive look that might come up, ensuring it could be called against any opponent.

Ideally, Michigan's young linemen can focus on their footwork and assignments without being asked to master several different techniques in order to have a dynamic gameplan.

The repeated mantra by Nussmeier is removing the negative plays that plagued Michigan in 2013 by providing players with foundations. Once the line is competent in blocking plays like inside zone and power and the quarterbacks understand how to make reads in passing concepts like shallow cross and Y-sail, then the team will advance towards finding an identity.

This laser-like focus is ideal for transforming the elite players that a program like Michigan can recruit into a dominant machine that leverages talent into consistency. Through this simplified process, Michigan can finally have the physical, pro-style system that Hoke wanted to bring back to Ann Arbor. 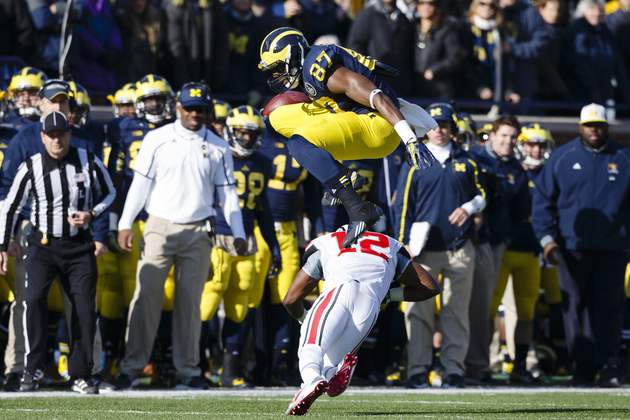 In addition to recruiting powerful linemen and drilling schemes relentlessly, the Nussmeier system will also involve the use of tight ends and H-backs to control the edges and create stress points in the defense. With a large variety of unbalanced formations, Nussmeier makes the defense choose whether it wants to risk being out-leveraged by the run or the pass.

For instance, observe the Alabama offense presenting multiple stress points in the Texas A&M defense simply by alignment (before running inside zone):

Alabama has four receivers to the wide side of the field: slot receiver, outside receiver, H-back, and tight end. However, the inside zone cutback threat prevents the A&M defense from moving defenders over to handle the running strength of the formation from the weakside. Meanwhile the threat of a pass forces the Aggies to align three defenders too deep and wide from the formation to affect the run game.

The Crimson Tide easily overwhelm the Aggies behind the tight end/H-back combo block, while they also flawlessly respond to the Aggies throwing a middle linebacker blitz at them. It's just inside zone for the line.

Later they came back to the formation to run play-action:

A&M attempts to throw a big blitz, but the multiple stresses of having four receiving threats to one side of the formation gives AJ McCarron an easy read and a wide-open receiver. There aren't many blitzes that can handle that many receivers flooding a single side of the field. Alabama doesn't even block the blitz very effectively, an encouraging sign for a young Wolverine line likely to have its share of struggles with protection.

The beauty of the Nussmeier passing game, besides being frequently set up with easy opportunities by its brutal run game, is that it's fully modern in allowing the quarterback to moves his eyes from one simple read to another.

The Aggies' coverage is fairly clear here. After the snap, McCarron eyes the safety, sees him stay on top of the tight end route, and then turns and throws a curl for an easy first down. The Tide are running a shallow cross with multiple options attached, but the progression is simply to determine the safety's coverage and then pick on the best matchup.

On this Y-stick play, McCarron sees that the Aggies linebacker responsible for tight end Brian Vogler is too far inside and makes the quick pitch to him over the middle for an easy first down:

The modern passing game is all about packaging route combinations together to either side of the field, allowing the quarterback to read the safeties after the snap and then focus his eyes towards a defender or matchup advantage to one side. A&M had a safety to the boundary to help against receiver Amari Cooper, so McCarron looked to the other side of the field and made a quick decision based on the middle linebacker's positioning.

Timing and accuracy are involved, but the system affords the quarterback a lot of easy options for where to go with the football.

For an example of how this could look with Michigan's 2014 personnel, Nussmeier could play a tight end, H-back, and wide receiver to one side of the formation and place Funchess to the other side. The first threat would be from a zone play: 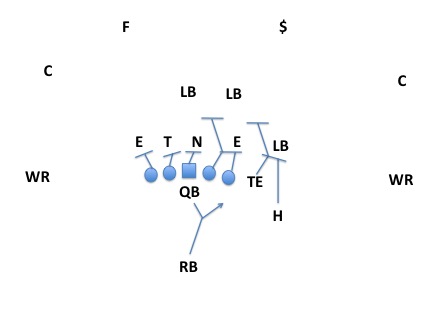 If executed effectively, the defense might have to drop down a safety to help defend the play. Here's what that sets up for Nussmeier: 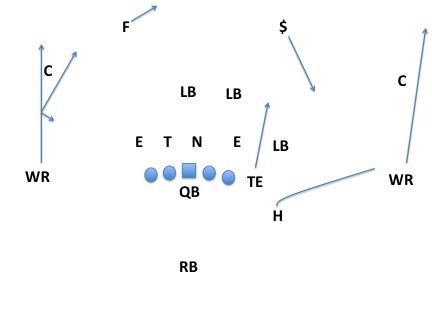 Dropping a safety and smothering all the quick routes to the field leaves a receiver like Funchess matched up alone with a cornerback without much safety help. Michigan could line up Funchess to the right and try to beat the corner over the top, or line him up on the left and abuse the corner with whatever route adjustment looks most profitable.

A review of Michigan's 2014 freshman class, which includes a few pieces Nussmeier might incorporate soon.

The Wolverines' receiving corps has a star, but it's otherwise unproven. Who has to step up for Gardner and Nussmeier?

Borges knew how to create matchup problems and stress points for a defense both with the passing game and the run game. He didn't know how to do it off of simplified concepts for young players to master quickly.

With Nussmeier and a more Nick Saban-like approach to the process of building a unit, there's a chance that Michigan can have a running game and set up Gardner for easy success despite an inexperienced line and younger weapons.

If the Wolverines still can't control the line of scrimmage or field players that can stress a defense with unbalanced alignments, then the offense will falter again, and Michigan might be looking for a new man up top.