All we (still) know about the Jameis Winston case: Investigators failed

A reminder that the Tallahassee Police Department and Florida State University should have done more to pursue an alleged act of violence against a woman, and should have done it more quickly.

Share All sharing options for: All we (still) know about the Jameis Winston case: Investigators failed

The New York Times has published a lengthy review of the investigation into a rape allegation against Florida State quarterback Jameis Winston and involving two of his teammates. It concludes with a line from a former assistant state attorney about "keeping players on the field" being "a priority" in Tallahassee.

It contains a few new details on Winston, and is a thorough summary of a side of the story (it does exclude some information that works in Winston's favor and some that suggests a different conclusion), primarily the ineffective work done by Tallahassee police and by the school.

After a day of press conferences, tomahawk chops, and general unprofessionalism, the Winston investigation comes to an end.

We already knew the Tallahassee Police Department performed a meager investigation, which focused at least as much on the accuser and her relations as it did on the suspect. And we knew Florida State's investigation was also unsatisfactory, as it didn't begin until the football season had concluded (and as evidenced by the Department of Education opening a probe into how the school handled the case).

The Times finds more signs of failure, such as the police's inability to locate the players' taxi driver and the investigation being marred by a delay in obtaining security video from the bar where the alleged victim met at least one Seminoles player. By the time police requested the footage, it had been cycled over.

And Willie Meggs, the Florida state attorney who helped turn the announcement that Winston wouldn't be charged into a circus, finds numerous faults, including the investigator's choice to first contact Winston by phone instead of surprising him at baseball practice. 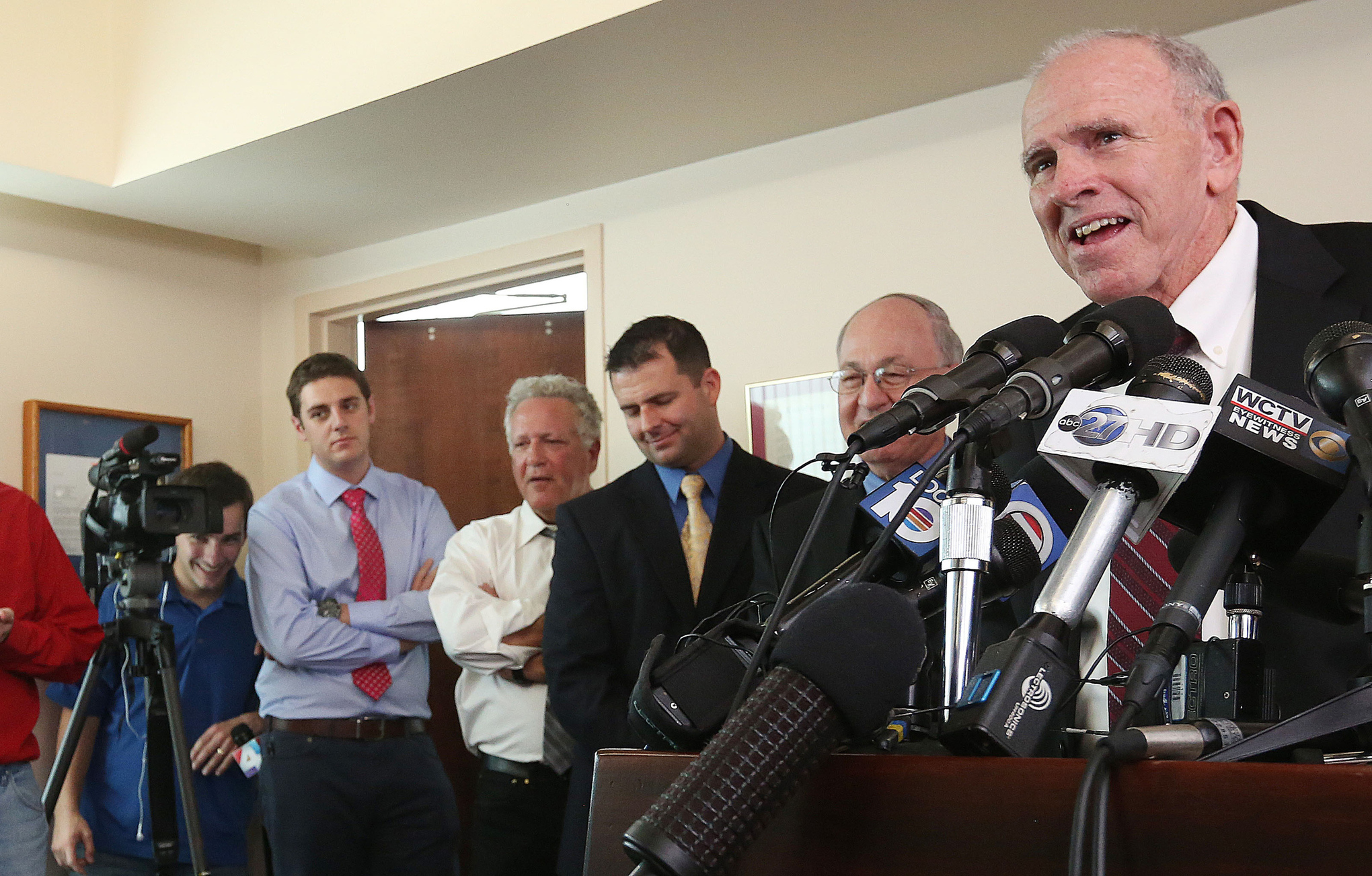 Meggs and others laughing during the press conference announcing Winston was not going to be charged with sexual battery/Photo credit: Tallahassee Democrat-USA TODAY

The most damning information provided by the story is the barrage of evidence that the half-hearted rape investigation was not unique. The Times on another rape case, in Oct. 2013, involving Florida State students [my emphasis added, because I'm a father, and ... wow]:

The police response was so inappropriate, according to the father, that later on, in a complaint filed with the police, he compared it to the Winston inquiry, which had recently drawn criticism in the news media.

The father, a part-time deputy sheriff in another county, said he was away on business when he called his daughter and found her crying and confused. With prodding, she disclosed that she had just spoken to the police about "a situation," but would say no more. An officer had told her that "it might be better not to inform me," her father said.

Alarmed, he asked his wife to call. She did, and their daughter said she had been raped. The mother and a family friend, also a law enforcement officer, immediately drove more than two hours to Tallahassee. They found the daughter with what appeared to be choke marks on her neck.

The Times also reports a second woman sought counseling after an encounter with Winston, but that she didn't believe she had been raped. No crime was committed against the second woman, according to chief assistant state attorney Georgia Cappleman, who did find the incident "troubling," in the Times' words.

As far as the Winston case goes, we're in largely the same predicament we were when the news first broke in Nov. 2013: we don't know what happened.

We do know that the vast majority of sexual assaults do not result in conviction, and most do not result in charges even being filed. It is a crime, but one that rarely leaves definitive evidence - and often the prosecution process dehumanizes the alleged victim as much if not more than the incident itself. So many times the victim of a sexual assault will choose not to cooperate or press charges.

We don't know if any of that information is applicable to this specific situation, however. If it's not, then Jameis Winston's life will have been made worse by someone else's alleged crime. We don't know.

Winston has never been charged. According to our legal system, he is innocent. He would remain so even if charged, unless a jury were to find him guilty.

Either Winston or his accuser is wrong about what happened on Dec. 7, 2012, but both of their lives have been made more difficult. Due to the lack of a full, prompt, professional investigation, this is the only unimpeachable conclusion I know of.

Update: Florida State has released a statement, via Tomahawk Nation:

The university expresses its deep disappointment in today's New York Times story alleging FSU officials did not properly investigate a rape allegation against Jameis Winston "in apparent violation of federal law." It also vigorously objects to the newspaper's characterization of the university as being uncooperative in explaining its actions.

The university provided the newspaper with a general statement (below) and numerous written answers over a period of weeks. Most of the responses were left out of the story, giving readers an incorrect impression of the university's efforts on behalf of sexual assault victims under Title IX.

Among the points FSU emphasized but were either missing or downplayed in the NYT article:

The Times has done its readers, as well as the FSU community, a disservice by omitting these answers and by seriously misrepresenting the university's concern and care for its students who are victims of sexual assault.

Following is the full statement the university gave The New York Times prior to today's article:

Given the inherent tension within the "Dear Colleague" letter, FSU seeks to empower victims by giving great weight to their wishes when it comes to counseling, academic accommodations and supporting them through criminal or university proceedings. In a great number of cases, the victims make it quite clear that they don't want to file a police report or pursue a Code of Conduct process.

FSU's Title IX/Code of Conduct process has worked well for the vast majority of sexual assault cases. The process has provided victims with the emotional and procedural help they need, and the university has handled dozens of cases over the years that have resulted in the discipline of respondents.