Quarterback Chuckie Keeton is expected to return at 100 percent for Utah State in 2014, but the Aggies' success in the Mountain West will depend on their ability to account for losses, especially in the secondary and on the offensive line.

He took ace defensive coordinator Dave Aranda with him.

Running back Joe Hill got hurt in Game 5.

And then star quarterback Chuckie Keeton got hurt in Game 6.

Midway through the 2013 season, Utah State was led by a first-year head coach and a freshman quarterback. And the Aggies finished the regular season with five consecutive wins, beat out Boise State -- Boise State! -- for the MWC Mountain Division title, narrowly lost at Fresno State in the conference title game, beat Jordan Lynch and Northern Illinois in a bowl game, and finished 32nd in the F/+ rankings, only 15 spots below where they ranked in 2012.

Utah State survived in 2013 when it had every excuse in the world not to. I'm not sure you can say anything more flattering about any program. But now more tests come in 2014.

There is so much randomness in college football. So much of your fate in a given year is determined by the timing of injuries nad the success of others.

Despite losing Andersen, Aranda, and a few defensive stars from the 2012 squad that ranked ninth in Def. F/+, Utah State's defense actually improved to eighth in 2013. It was a remarkable feat, one that could have helped USU maintain its top-20 overall ranking. But the offense lost the one guy it couldn't lose. And not only did the Aggies lose Chuckie Keeton, but they lost him during the BYU game, one week before the Boise State game. Quarterback Craig Harrison was thrown into the fire at the worst possible time -- overwhelmed, he went just 25-for-58 for 192 yards against the Cougars and Broncos -- and failed, giving way to freshman Darell Garretson. If Keeton is lost either before the season (with plenty of time to adapt to his absence) or after the Boise State game, maybe USU scores another win and gets to double digits for the second consecutive year.

Regardless, Keeton's injury means that USU is more prepared to account for his absence after 2014. That's good. And it appears he's on track to be completely healthy this fall. That's even better.

The idea of a "replacement player" is a common one in advanced stats, mostly because of VORP. It basically gauges the value of a player by comparing him to your standard-issue player at a given position, someone just about any team can land.

Obviously the idea of the "replacement player" is tricky at the college level. A replacement-level player at a powerhouse like Alabama is simply going to be different than someone with the same term at a mid-major program. That said, we got a pretty clear glimpse of Chuckie Keeton's value when he was lost for the season with a knee injury against BYU.

Adjusted Score is a way to measure game-to-game performance while taking both opponent and breaks into account. With Keeton, Utah State's offense was a little bit above average. Keeton had minimal big-play threats in the receiving corps, but he was able to efficiently move the ball against teams not named USC. (Almost nobody moved the ball efficiently against USC.)

Without Keeton, Utah State was 7.7 points worse. After averaging at least 5.6 yards per play four times in their first five games, the Aggies did so only three times the rest of the way (and against New Mexico, Hawaii, and UNLV). In their last four games of the year, they averaged just 3.8 yards per play. And the defense was so incredible that they still went 3-1 in that stretch.

With Keeton, Utah State was a legitimate top-25 team, one with an efficient offense and ridiculous defense. Without him, USU was all defense.

In 2014, the Aggies will be forced to reload a bit on the defensive side of the ball, and the offense might need to carry a bit more weight. And while Keeton will probably be healthy, it's probably not a good idea for him to have to carry 10 other offensive players in every game. He'll need some help. 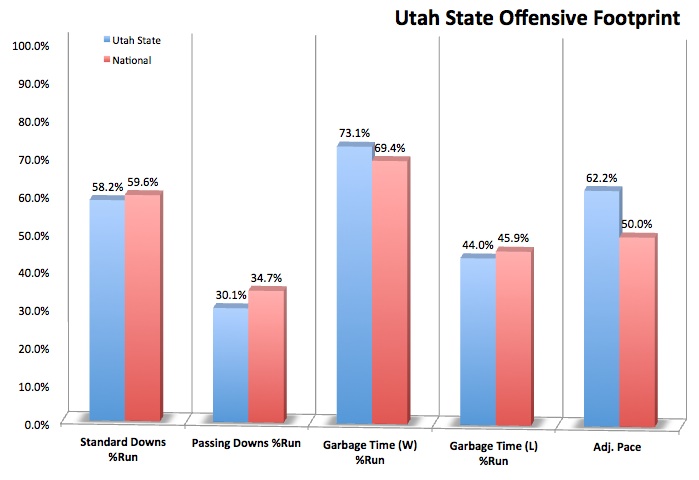 4. Where are the big plays?

When Keeton got injured, college football Twitter was crestfallen. Few players were more fun to watch than the senior from Texas, and thanks to the increased prevalence of USU games on national television, we saw quite a bit of him. His decision-making is sound, his elusiveness is top-notch (hopefully this remains the case post-injury), and his ability to make plays out of the pocket is as strong as almost anybody's in college football.

But his supporting case got terribly depleted following the departure of running back Kerwynn Williams (2,209 rushing and receiving yards in 2012) and his top four wideouts. With less experience and known play-making ability around him, he found himself throwing shorter passes to players less capable of breaking big plays. He completed more than two-thirds of his passes, but for just 10.2 yards per completion.

Keeton's elusiveness might be just fine in 2014, but he needs as much help as he can get from his supporting cast, and considering last year's top two rushers are gone, as are two of the top three wideouts, there's nothing saying he'll get that help.

That Joe Hill is back will help. He also suffered a season-ending injury midway through the season, and he showed reasonably decent explosiveness in 2012-13. (Anything over 5.0 highlight yards per opportunity is pretty good; he had 5.8 in 2012 and 5.2 in 2013.) But if he isn't quite as strong post-injury, Keeton and offensive coordinator Kevin McGiven will have to turn to an almost completely untested batch of backs.

It's the same story at wide receiver. Travis Reynolds, easily the biggest big-play threat in the receiving corps, is gone. Ronald Butler showed decent explosiveness, but Bruce Natson and Brandon Swindall were used almost entirely close to the line of scrimmage. Receivers had a lovely spring -- Swindall was explosive, and former three-star recruits Alex Wheat and Braelon Roberts looked good -- but that came against a rebuilt set of USU corners. We'll see if they can do it against others, too.

Perhaps the most alarming part of Keeton's supporting cast in 2014 comes up front, where the Aggies will be forced to replace five of six players with starting experience. Those accounting for 152 career starts, including all-conference center Tyler Larsen, are gone. Only two-year starting guard Kevin Whimpey returns.

The good news, as it were, is that USU's line stats have been pretty poor for a couple of years now. The numbers can only fall so far. But again, when you've got a quarterback coming off of a knee injury and a skill position cast full of potential but almost no known production, an inexperienced line is the last thing you want to have to deal with. 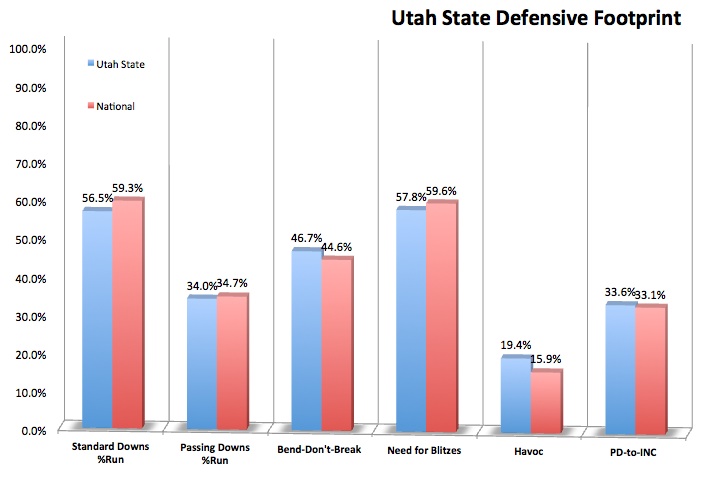 6. I want to marry this defense

The 2013 Utah State defense had the highest actual F/+ rating (plus-18.3 percent) of the bunch. And again, the Aggies did this despite losing defensive coordinator Dave Aranda, perhaps the best young defensive coordinator in the nation, to Wisconsin. Aranda's replacement, Todd Orlando, who had spent the previous two seasons coordinating another rather successful defense at FIU, not only kept USU's defense from dropping too far ... he made it even better.

The 2013 Aggies were simply stout. They were quite possibly the toughest defense in the country against the run. They had the size, depth, and talent up front to occupy blockers with three down linemen. They had a foursome of linebackers that lived in the backfield (not literally, as that would be a penalty ... unless ...). They had two of the most active cornerbacks in college football and a pair of safeties that made plays both behind the line and 30 yards downfield. This was a sound, sound unit. It made Utah State incredibly fun to watch despite the low scores on the scoreboard. There were occasional breakdowns when it comes to big pass plays, but that's only so much of an issue when you are so successful at making teams one-dimensional.

Orlando faces a relatively stiff test in 2014, however. The Aggies return quite a few difference-makers -- outside linebackers Kyler Fackrell and Nick Vigil, end B.J. Larsen, inside linebacker Zach Vigil, safety Brian Suite -- and Utah State redshirted a few defenders in anticipation of attrition. Still, six pretty damn good starters are gone; we'll see if the replacements are far enough along in their development to avoid a drop-off.

8. Potential weakness in the secondary

I can't work up too much concern about the front seven even with a little bit of turnover. But there's a lot of turnover in the secondary. Not only three of four starters gone, but four of the top six backups are gone, too. Maurice Alexander was one of the most successfully aggressive safeties in the country; he was a huge asset near the line of scrimmage. Meanwhile, corners Nevin Lawson, Tay Glover-Wright, and Quinton Byrd combined for not only five picks and 33 passes defensed, but ALSO 12 tackles for loss. The secondary did occasionally give up some big plays, but they were easily effective enough to counter that.

There are some athletes here -- among others, Ladale Jackson is a former three-star recruit, and Daniel Gray started briefly at Tennessee in 2012 -- but the experience level goes from major asset to liability. We'll see how much of USU's recent success is because of system and how much is because of a unique confluence of talent.

Utah State was so good at the little things in 2013. The Aggies stiffened near the goal line, and they were good to great in the field position battle. Really, all they lacked was a kick returner, and they'd have had a top-10 special teams unit.

The strengths of this unit return: punter Jaron Bentrude doesn't have the longest kicks in the world, but opponents get almost no return opportunities against him. Bruce Natson is one of the best punt returners in the country. And while Nick Diaz could stand to be a little more consistent on shorter kicks, he's solid.

If the Aggies can unearth a good kick return man (Natson perhaps?), this should once again be a great unit.

10. Don't take Chuckie away from us again, please

We'll begin to learn if Utah State is truly built for the long haul this year. Taking a moribund program (here's your annual reminder that the Aggies won 15 games in the six years before Gary Andersen took over and didn't have a winning record from 1997 to 2011) and putting together a short span of success is hard but reasonably common. Sustaining that success, especially through a coaching change, is anything but common.

Matt Wells passed his first test, both in how he crafted his staff and how his first team played; but as the players most closely associated with USU's 27 wins in three years begin to graduate and depart, it's up to Wells to replenish the stock. He might pass that test, but even with the return of Chuckie Keeton, there is quite a bit of uncertainty here.

I think the Aggies are still in pretty good shape for 2014, however. The front seven should still be strong enough to key a decent defense even if the pass defense falls apart to a certain degree, and the return of both Keeton and Joe Hill should make the backfield just effective enough to move the ball a bit even if the line is sketchy. Injuries in the backfield or in the front seven could be devastating, but that goes for a lot of teams. The first string, as we know it, is pretty good.

But seriously, Sports God, don't injure Chuckie Keeton in his last year. We don't ask for much, but we want to watch him for another 13-14 games.