Fortunes change quickly in Ruston, LA, and after an awful first season as Louisiana Tech's head coach, Skip Holtz looks to some new blood on defense (on both the field and sideline) and in the receiving corps to liven up a team didn't have much life in 2013.

1. That wasn't very much fun

The last six seasons for Louisiana Tech have been ... confusing. We use recent history to determine the health of a program; it tells us a lot more than simply looking at last year's results. But what do you make of a program that...

That's a confusing résumé right there. In the end, Tech has done well enough recently to rank first in Conference USA in the five-year F/+ rankings (which is why the Bulldogs are the last C-USA team getting previewed here). But among current CUSA teams, they ranked ahead of only FIU, Southern Miss, UTEP, and UAB last year. The 2013 Bulldogs were inexperienced up front, unstable behind center, and glitchy on defense.

With a new, familiar name leading the defense and perhaps more stability at quarterback, can the Bulldogs bounce into the top half of their league? Your guess is as good as mine. I know this isn't a particularly good look:

... but I know that fortunes change rapidly in Conference USA, too.

2. It wasn't that bad in the middle

The start and finish of the season for Louisiana Tech were absolutely dreadful. In the first two games, the Bulldogs were outgained by 221 yards by an N.C. State team that turned out to be quite poor, then crept by undermanned Lamar squad. At the end of the season, against Rice, Tulsa, and UTSA, they averaged 4.4 yards per play while allowing 5.9 and were outscored by a combined 106-38. In these five games, Tech was one of the worst teams in FBS.

In the middle seven, they weren't particularly good, but they were respectable.

From October 5 to November 9, Tech went 3-1; yes, the Bulldogs only beat three teams ranked 100th or worse, but they also put up a strong fight against a good North Texas team. By no definition was Tech good at really any point in 2013, but you can draw hope from the Bulldogs' level of play in the midsection of the season. 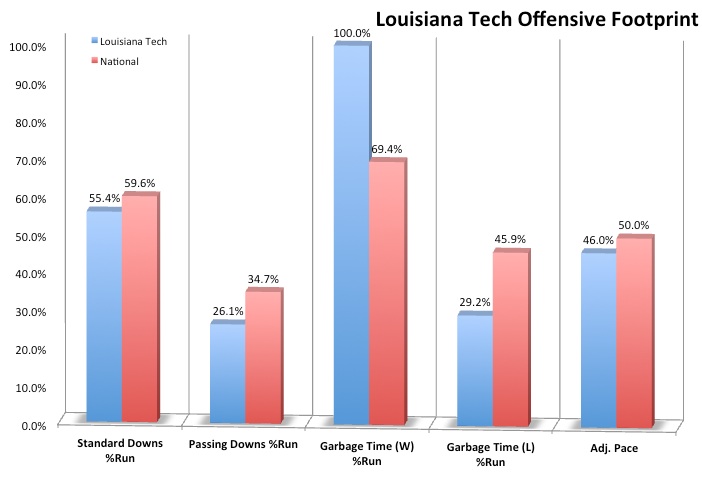 3. A pass-first offense that couldn't pass

My biggest concern for Louisiana Tech in 2013 was the extreme stylistic dissonance that was going to occur in moving from Dykes' pass-heavy offense to the slow, run-first offense Skip Holtz has espoused through much of his head coaching career. But then Holtz brought in Marshall offensive co-coordinator Tony Petersen to run his offense; Marshall's 2012 offense was insanely pass-heavy and fast-paced, and Petersen said he wanted to bring something similar to Ruston. This was a bit of a departure for Holtz, but with the personnel that Dykes required, it seemed like it might be a decent fit.

For one reason or another, it wasn't. With two new quarterbacks (redshirt freshman Ryan Higgins and former Texas Tech Red Raider Scotty Young) splitting snaps, with a pretty new offensive line, and with a receiving corps that featured no go-to receivers (seven players were targeted between 2.5 and 5.0 times per game in 2013, and only two averaged better than 6.2 yards per target). As it had under Dykes, Tech's offense was pass-first, but the Bulldogs couldn't pass.

Unless a true freshman seizes control of the job this August, this year's quarterbacks are last year's quarterbacks. Higgins struggled with both injuries and interceptions in 2013, while Young was ultra-conservative in his decision-making (8.4 yards per completion, only two interceptions) but still only completed 53 percent of his passes.

The receiving corps loses five of its top eight targets, but that's not necessarily a bad thing. New blood might be a good idea for this unit, and in LSU transfer Paul Turner, redshirt freshman Carlos Henderson, and JUCO transfer Sanford Seay, that new blood might be pretty good. Turner adds an element of speed that Tech didn't really have in 2013, and really, as long as the pass protection doesn't completely fall apart with a revamped line, the passing game should improve. Considering the numbers -- under five yards per pass attempt, 30 sacks, 10 touchdowns to 15 picks, No. 125 Passing S&P+ ranking -- it probably can't get worse.

4. Talent in the backfield

A pass-first predilection hurt Tech in a couple of different ways in 2013. The most obvious was that Tech stunk at passing. Beyond that, though, is that the running game wasn't that bad. Tech's top three backs all averaged at least 6.3 highlight yards per opportunity, and both Kenneth Dixon and Tevin King were solid in creating such opportunities. In 20 carries per game, Dixon and King averaged 6.0 yards per carry; that's better than Tech's passing averages, and without the interception risk.

King is out this spring with a dislocated ankle -- actually, injuries have been such an issue this spring that the Bulldogs haven't been able to scrimmage yet, but hey, better now than in the fall -- but if he's healthy, he will be part of a pretty exciting backfield.

Of course, the runners will still need blocks.

Rebuilding once is difficult enough, but line coach Matt Moore now has to do it all over again.

For the second straight year, the Tech line is getting revamped. The Bulldogs returned only 16 career starts heading into 2013, and they return only 24 this year. Call it a double-dip recession -- not only do you have to replace starters, but the odds are good that you're replacing them with guys who haven't even been on the second string for very long. With almost no proven depth, the line is a huge question mark, and it would be quite beneficial for Tech if JUCO transfers Kirby Wilson and Blake Sharp were both ready to shine immediately. 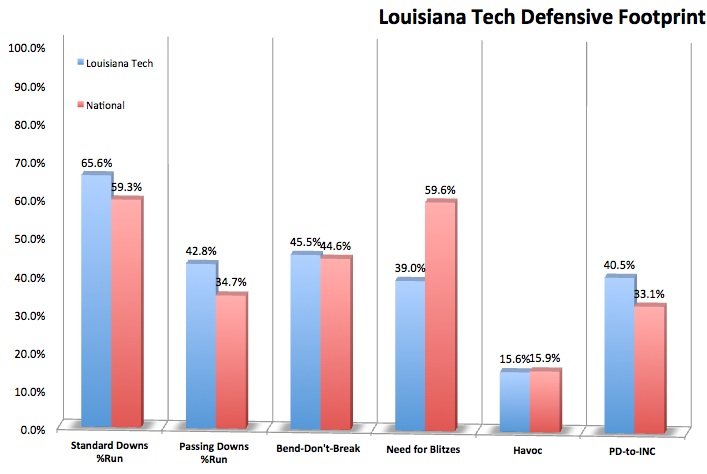 6. A rebuilt line and coaching staff

With three defensive assistants leaving for other jobs, Holtz had the opportunity to bring some new energy into the staff, and he did just that. Oscar Giles is the new line coach, Blake Baker is the new safeties coach, and most notably, former Texas and Mississippi State defensive coordinator Manny Diaz is the new coordinator and linebackers coach.

Diaz's reputation has been pulled in a couple of different directions in recent years. Not even two full years ago, he was regarded as one of the top young defensive minds in football. His final defense as coordinator at MTSU ranked 33rd in Def. F/+, and in the four years since he left, the Blue Raiders' average ranking has been 95.3. He coached for one year at Mississippi State and improved the Bulldogs' defense from 50th to 20th, and it dropped to 30th, then 54th, after he left. And in his first year at Texas, he improved the Longhorns' defense from 31st to sixth.

Of course, Texas dropped from sixth to 40th in 2012, and after one poor performance in 2013, Diaz was scapegoated and fired by Mack Brown.

The Diaz rehabilitation project begins in Ruston. He inherits personnel that is suitably aggressive -- three returning linemen had at least four tackles for loss, three linebackers had at least two, and four defensive backs defensed at least five passes -- but lacked in consistency in 2013 and lacks in depth in 2014. Star pass rusher IK Enemkpali and linebacker (and TFLs leader) Daniel Cobb. Throw in the loss of two of the top three tackles, and you've got some potential depth issues here.

At least the sketchy Tech offense had the good sense not to move very quickly. The Bulldogs operated at a pretty slow pace, which helped to keep the defense off the field a bit. At the same time, however, the offense offered minimal threat, and opponents were happy to go with a run-heavy approach despite a shaky Tech pass defense. That led to quite a dichotomy between Tech's passing yards allowed (31st in the country!) and actual quality (121st in Passing S&P+).

The secondary should improve in 2014, however. First, Diaz's oft-exotic blitzing could help with a pass rush that was almost non-existant in blitzing situations. A pass rush is a secondary's best friend, and despite Enemkpali, Tech's pass rush just wasn't good enough in 2013. Beyond that, the top three corners and top four safeties all return. Adairius Barnes, Le'Vander Liggins, and Bryson Abraham combined to defense 27 passes last fall, and Thomas McDonald is a big play-maker at safety. As you can tell from the numbers above, big plays were certainly an issue here, but the defense at least made some big plays of its own.

Poor offense and defense ruined what could have been a field position advantage generated by special teams. Logan McPherson wasn't much of a distance punter as a freshman, but he generated a lot of fair catches and downed a lot of balls inside the 20. Kick and punt coverage were decent and should be again this fall, and some new blood in the return game might not be a bad thing. This should at least be a decent special teams unit, one that won't hurt Tech and could help out in close games if the offense and defense show any sort of improvement.

The two biggest weaknesses on this team -- pass offense and pass defense -- should both improve, perhaps by quite a bit, in 2014. If the line isn't awful, the running game could be a strength as well. Louisiana Tech fell from 52nd in the F/+ rankings to 112th in a single season, and while a similar bounce back isn't going to happen, I would expect this team to improve at least to the No. 95-105 range this fall.

That's the good news. The bad news comes with that September schedule. Even a dramatically improved Tech team is likely to start 1-4.

If the Bulldogs can survive a gauntlet of trips to Oklahoma, Louisiana-Lafayette (the Sun Belt favorite), North Texas (a potential C-USA West favorite), and Auburn with some semblance of confidence intact, the last seven games on the schedule could produce five wins and bowl eligibility. But that's a pretty significant "if."

Really, the goal for 2014 should probably just be improvement and about five wins. That would likely put a lot of pressure on Holtz to succeed in 2015, but he'll have an experienced enough team at that point to meet the demand of more wins.

At the end of each conference run-through, I take a look at how I perceive the conference's balance of power heading into the season. This is in no way based on schedules, so they are not predictions. They're just how I would rank the teams after writing 4,000 or so words about each of them.

I've set the bar really, really high for Rakeem Cato and the Herd this year.

Four teams doing a little bit of rebuilding and two teams (UTSA, FAU) with a lot of continuity and promise. I might be expecting a bit too much out of UTSA this fall, but frankly, they've dramatically exceeded expectations for two straight years. It's been impossible to expect too much out of the Roadrunners so far.

These teams could really go in any order. I think they're easily a step behind the top seven teams, but good luck figuring out who's better than one another.

To put it politely, FIU has a lot of work to do.