The mismatch problem: Why college football scholarships are not enough

Share All sharing options for: The mismatch problem: Why college football scholarships are not enough

Have you ever had a moment when you heard an argument that made you examine a long-held belief?

I had a moment like that recently when listening to an NPR Intelligence Squared podcast on college admissions. Intelligence Squared is a high-quality product, as the debate is civil, fact-heavy, and performed with great skill. In other words, it's everything that cable news is not, sort of like reading the best of the college football internet as opposed to relying on Holtz and May to analyze team strength.

The debate was especially well-done because it exposed me to a new argument about affirmative action in college admissions that I had not heard before. The argument wasn't the tired "it's just discrimination in reverse!" or "slavery ended a long time ago!" or "other minorities do well in the U.S., so why offer special treatment to Blacks or Hispanics?" claims that I had heard before.

Instead, the case centered on research establishing the mismatch theory. This posits that bumping students up into classrooms where they are competing with peers who have significantly better academic credentials is counterproductive, because the classes are not taught at the bumped-up student's pace.

Here is a description of the phenomenon from one of the participants:

When explaining to friends how academic mismatch works, we sometimes say: Think back to high school and recall a subject at which you did fine but did not excel. Suppose you had suddenly been transferred into an advanced class in that subject with a friend who was about at your level and 18 other students who excelled in the subject and had already taken the intermediate course you just skipped. You would, in all likelihood, soon be struggling to keep up. The teacher might give you some extra attention but, in class, would be focusing on the median student, not you and your friend, and would probably be covering the material at what, to you, was a bewildering pace.

Wouldn't you have quickly fallen behind and then continued to fall farther and farther behind as the school year progressed?

Although the article linked above contains a number of links to studies from labor economists supporting the mismatch theory, it is by no means a universally accepted phenomenon. For instance, a 2013 study from two researchers publishing in the journal Sociology of Education rebuts the conclusions of some of the mismatch advocates. 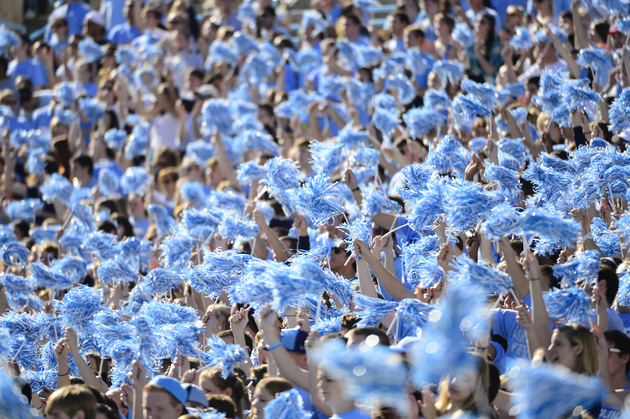 What is the value of a scholarship for an athlete who is herded into bogus classes, as most famously happened at UNC? Bob Donnan, US Presswire

In college admissions, the preferences given to football players are far greater than those given as part of affirmative action programs. The Atlanta Journal-Constitution looked at this issue in 2008 and found an average of a 220-point gap at major football schools between football players and the average student. If a non-football student who has an SAT score 100 points below the school's average is more likely to struggle in the classroom, then what do we expect of a student for whom the gap is more than twice that number?

What it takes to succeed

National Labor Relations Board regional director Peter Sung Ohr on the "extraordinary" effort required for athletes to keep up in the classroom (and Ohr's the one who ruled that Northwestern players are employees): "While the football coaches, and the Employer as a whole, appear to value the players' academic education, it is clear that the players are controlled to such a degree that it does impact their academic pursuits. [...] To try to ensure that its players succeed academically, the Employer requires freshmen players (and sometimes upperclassmen) to attend study hall six hours per week and all the players have tutoring and advisory programs that are not available to regular students. [...] However, these noble efforts by the Employer, in some ways only further highlight how pervasively the players' lives are controlled when they accept a football scholarship.

The special assistance that the Employer must provide to the players so that they can succeed academically (or at least, maintain the required minimum grade point average and make adequate progress towards obtaining their degrees) likewise shows the extraordinary time demands placed on the players by their athletic duties."

And then what do we expect when the football player with a lower SAT score is required to spend 40 to 50 hours per week during the season -- the equivalent of a full-time job -- on his extra-curricular activity?

Or, we might expect that the players' typical lack of academic preparation allows the system to turn them into unofficial agents for the program when they get out, as Steven Godfrey's outstanding piece on an SEC Bag Man made clear:

College majors like Exercise Science and General Education have long been assailed by critics as crip-course degrees, but shadow boosters see them as a vital way to perpetuate the cycle. If a player finishes out his eligibility and has no feasible future in the pros, he might return home and become a nearby high school coach. It doesn't matter if it's junior high or seven-on-seven camps; each means a new brand ambassador for the program.

"You win the gym teachers, and you can go a long way. That's why all those basket-weaving degrees are so important, because we need 'em on both ends. You need 'em to keep the kids qualified, and you need 'em to produce guys who can go back and coach and teach and help us."

So what does this mean for the debate over players profiting from their likenesses or otherwise being paid for playing football? It means that the arguments based on lines like, "I'm spending tens of thousands of dollars to send my kid to college, so these players are getting something of great benefit for free," are hokum.

According to the researchers who support the mismatch hypothesis, students who are the beneficiaries of significant preferences tend to drop out of their programs. In the case of college football players, they are more likely to get prodded along towards a degree without being able to do the work required, all because the school's athletic department has an interest in the players remaining eligible so they can generate revenue.

The notion that a player with a 25th-percentile SAT score will tend to derive the same benefit from an upper-tier college education as a student with an 80th-percentile score is fantasy.

Monday, NCAA president Mark Emmert claimed on "The Dan Patrick Show" that he'd be satisfied with an education instead of payment, if he were an SEC football player [17:51].

As with most rules, there are exceptions. In this case, there are certainly a number of players who can indeed function in competitive classrooms. That said, most major college football players aren't being given an asset of great value when they get a free ride, so they ought to be compensated in other ways.

The mismatch research also impacts the conclusions that we should draw as to whether college football players are university employees and therefore have the right to organize into a union.

The argument against treating players as employees is that they are students who happen to play football as an extra-curricular pursuit.

That fiction of the student-athlete gets harder to sell when players are put in situations where it's extremely difficult for them to function as students.