Will the NCAA's 'Big 5' reform be enough to save amateurism?

The NCAA recognizes the need for changes. But after waiting until 2014 to make them, its window of opportunity might have passed.

Share All sharing options for: Will the NCAA's 'Big 5' reform be enough to save amateurism?

Update: As expected, the NCAA has moved a step closer to establishing its new structure in August. From its release:

New voices would be added: the chair of the Division I Student-Athlete Advisory Committee; the chair of a new group tentatively called the Council; and the most senior Division I member of the Faculty Athletics Representatives Association's executive committee. The council chair would always be an athletics director, giving that constituency an automatic spot on the board. [...]

The council, composed of at least 60 percent athletics directors, would have 38 members: one from each conference plus two voting student-athletes and four commissioners (one from the Football Bowl Subdivision, one from the Football Championship Subdivision and two from the remaining conferences). The council would be the final voice on shared-governance rule-making decisions.

In order to allow the five highest-resource conferences (the Atlantic Coast Conference, Big 12 Conference, Big Ten Conference, Pac-12 Conference and Southeastern Conference) to address their unique challenges, the model would grant them autonomy to make rules on specific matters affecting the interests of student-athletes.

Original: On Thursday, the NCAA's Board of Directors is expected to push forward a proposal to be voted on by the universities that will vastly change college athletics. For the first time, the larger conferences in Division I would gain autonomy to pass their own rules as a "Big 5."

It's a major step, but a necessary one for an organization that has finally realized that in big-time college athletics, one size doesn't fit all.

A real-life SEC bag man explains the 10 rules for paying college football recruits without getting caught.

The NCAA — faced with the reality of major lawsuits and the unionization of its athletes, with real threats to the core of its business — knows that change needs to happen now, and in interviews and op-eds over the last couple months, its leaders hinted it's coming. They've been pointing toward this for almost a year now, but now there's a sense of urgency.

The organization is willing to allow schools to give their athletes enough money to cover the true costs of university educations. It's willing to make a whole list of reforms. It's even willing to relax its rules governing agents.

Common belief is that these concessions could be able to stop an all-out NCAA collapse. But there's still one topic — perhaps the most important one — on which the NCAA won't budge: amateurism. And without making any concessions on that end, the organization is still in as much trouble as ever.

What changes would the new structure bring?

The proposal released by the NCAA would allow for a number of non-marketability/payment reforms that should have been changed a long time ago. Most of them relate to the welfare of college athletes. And of course, there's autonomy.

After the NCAA refused to budge for so long, the situation demands philosophical change. These reforms stop short.

We explained autonomy in more context on Monday, but what it basically means is that the Big 5 conferences — the ACC, Big Ten, Big 12, Pac-12 and SEC — would have the ability to make changes on their own, some of which could immediately apply to schools in the smaller conferences and some of which would require a separate vote by those conferences.

Autonomy would allow for the bigger schools to provide their athletes with some common-sense benefits that they previously could not, due to NCAA rules. Essentially, the NCAA is conceding that Ohio State can help athletes a little bit more financially, even if Kent State can't afford to. (What's in it for Ohio State? Improving conditions for athletes is the right thing to do, but it's also another recruiting edge.)

Less-defined goals include giving athletes a role in NCAA governance, improving academic assistance, and shoring up health and safety.

Essentially, the NCAA plans to alter most of the rules people have been hollering about for years. Five years ago, that might have ensured the NCAA's survival, but after the organization refused to budge for so long, the situation demands philosophical change. These reforms stop short of that. 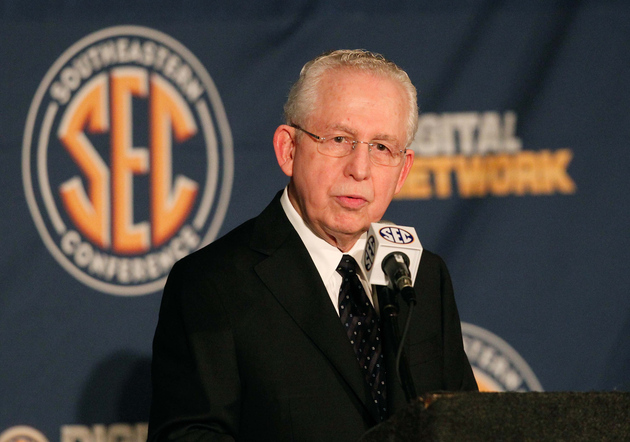 SEC commissioner Mike Slive has been among the most vocal in pushing for changes. Marvin Gentry, USA Today

Are these changes enough to preserve the NCAA's model?

Athletes still won't have real negotiating power, they can't market themselves, and the schools and the NCAA are still the ones getting all the money. That is to say, amateurism is still the name of the game.

And the NCAA makes that clear in its release on the changes.

(The universities) believe that the use of increasing resources devoted to student-athletes should ensure that the legitimate educational, health, safety and athletics needs of student-athletes remains paramount, and that the spirit of the collegiate model and principles of amateurism remain applicable and valued by all 1,100 NCAA member institutions and 460,000 student-athletes. They accept that they have a responsibility to lead in these areas through the granting of an autonomous system of decision-making in key areas directly affecting student-athlete well-being.

Basically: "We know we have to take care of student-athletes. Trust us." But as College Athletes Players Association (the organization behind the Northwestern union) president Ramogi Huma pointed out, "What they give today will be gone tomorrow. There's not a lot of trust."

"They're done countering our arguments now," Huma's also said. "How do you counter medical expenses for players? I think what they're hoping for now is the benefit of the doubt, that they can handle this internally. We're beyond that: The NCAA arbitrarily making things right? Nah. With all respects: Been there, done that."

NCAA president Mark Emmert has said multiple times on his recent media tour, which has included "The Daily Show" and various ESPN appearances, that the changes address the issues raised by CAPA. By implementing these reforms, the NCAA will have you believe that unionization is no longer needed.

The NCAA can believe whatever it wants, but the fact is that these changes don't do much to change the government ruling that college athletes are employees. These changes don't establish that athletes should do without unionization. Scholarship tenders still look a lot like employment contracts, and hardly anything concrete is changing when it comes to long-term medical coverage.

Union is the least of its worries

But even looking beyond unionization and the status of college athletes as employees, the refusal of the NCAA to allow its players to market themselves means that the organization's legal threats will not change.

The changes do nothing to invalidate the arguments of Ed O'Bannon or Jeffrey Kessler in their suits against the NCAA. The courts could still very well rule in O'Bannon's favor, forcing the NCAA to negotiate with players and forcing the organization and the Big 5 conferences to hand over some of their TV revenue, effectively ending amateurism.

The Kessler lawsuit, while in the earlier stages, is perhaps an even bigger threat. And the staunch refusal of the NCAA to bend its marketability rules helps Kessler's case. He claims that capping players' earnings at a scholarship is illegal and a type of price fixing. Caps are allowed in the professional leagues because those leagues negotiate with their players, but by continuing to refuse to negotiate or allow any sort of marketability, the NCAA is going to find itself in hot water in court.

The reforms being pushed forward on Thursday are noble compared to the current rules, but they're also the most the NCAA can budge while keeping its current setup — keeping labor costs low while pocketing all the money.

If any real change is to come to the model, it will come from the courts, where the NCAA is still fighting tooth-and-nail to hold onto amateurism.

And the lack of changes to the NCAA's business model makes the grounds for those lawsuits even clearer.